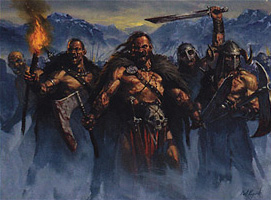 Having finished our business in shadowdeep we leave town to get back to the village of compliments. After a day of travel the sun is going down and we are starting to think about camping. Around a turn in the road we suddenly stumble upon a camp with burning corpses and tents,

As we consider what to do we hear forces from the nearby forest/shrubbery yell out: "Give us your money or your life!"

Ah, just a simply ambush.....No, unfortunately not. The call is quickly followed by malevolent laughter, some reference to a mad god and, the worst, a fireball. Jane the illusionist, and Archon our dwarven cleric go down immediately.

A group of filthy, blood encrusted warriors charges from the underbrush towards the battered survivors. Jenks is able to spot an invisible mage that sent the fireball (thanks to the fragment of the robe of many eyes he has as a 'blindfold'). He quickly fires off an entangle spell to distract the mage. 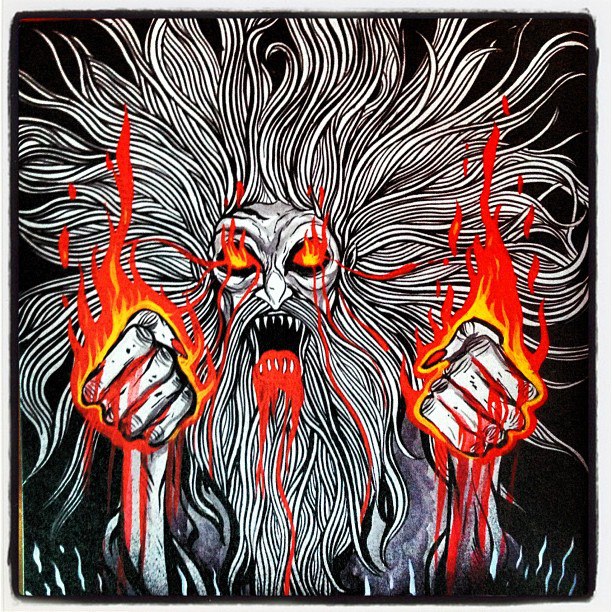 The warriors end up being maddened fanatics who start chopping at everyone, including the bleeding to death archon and Jane. Jenks is forced to insect swarm the mage as he struggles loose of the entangling vines, and the fight is getting down to the wire as everyone is very close to death. Finally some lucky rolls by scabs and Dan manage to finish off the warriors. Dan is brought to within a few hps of death by a barrage of magic missiles before the group is able to capture the (also blood encrusted) mad mage.

Jane is barely alive, and Archon has succumbed to his wounds. Dan is near death, while Scabs and Jenks are both pretty beat up. Deciding not to risk another night and day in the open, the party races back to shadowdeep, right back to the townhouse that still has a few weeks of a lease on it. Jenks and Scabs leave the rest of the group to recover at the town house while they take the mage to the university. As they make their way through the town in the day light, people begin to pelt the mage with rotten produce and fists. On campus they are met with slack jaws and stares by students and faculty. 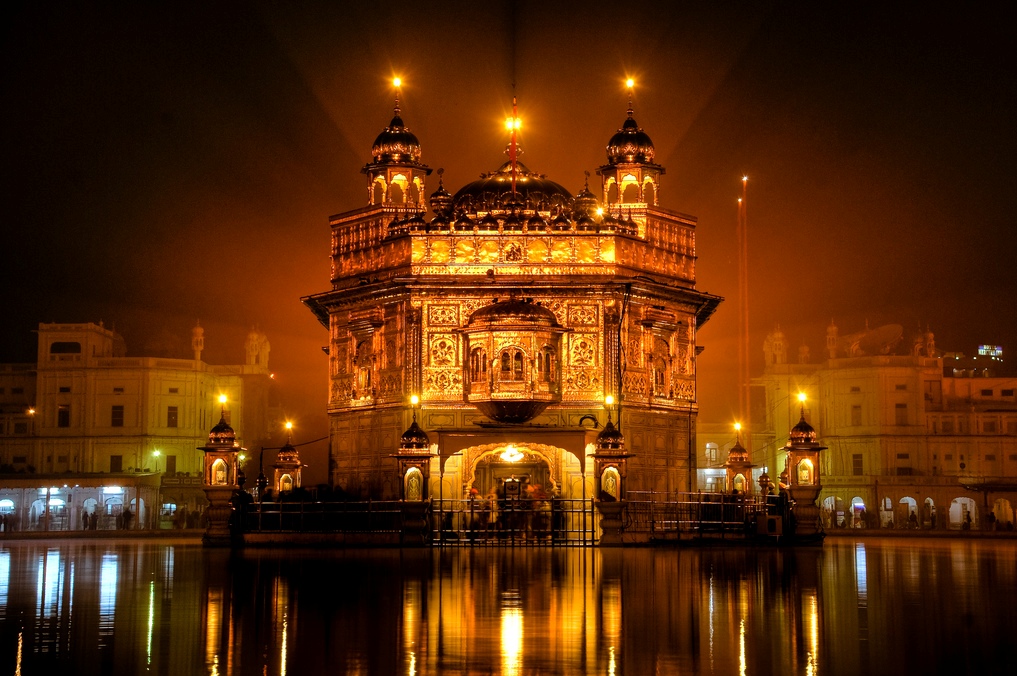 The headmaster reveals to us that this is Magus Manson, a disciple of the mad god Ricad. He used to be an instructor at the university. He had started a cult of some sort and finally left town after a strange atrocity with some performers (details were not forthcoming). After he skipped town he became a plague to the local countryside. We are offered either a cash reward or magic luck stone. We leave to consider the options, and take archon to the temple of light. 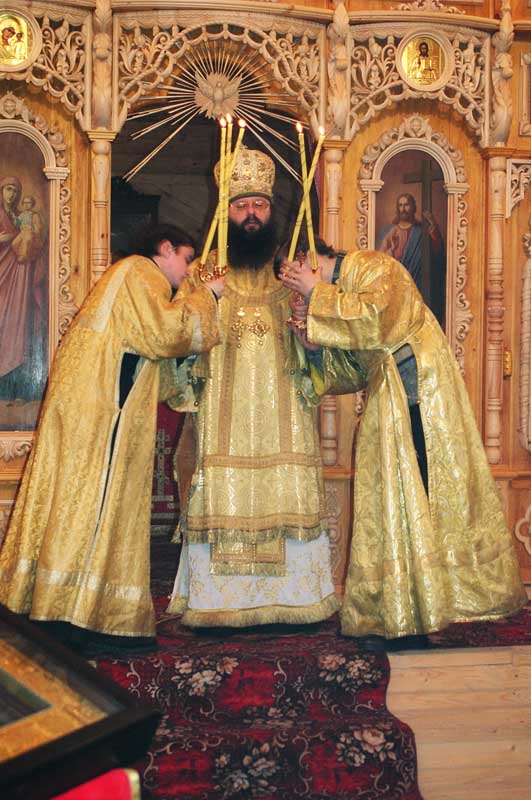 We meet with the D&D pope of light and are struck with murderous intent. The bastard wants 6000gp to raise Archon. Despite the obvious opulence of the temple (the offices are even more bejewelled than before), and the popes good health (looking younger from the potion we secured him) he gives us the usual crap about goodliness being proportional to wealth. And the gods would provide wealth should they intend archon to be alive at this time. We get a small credit in that we are offered a volume discount.......raise 4 and the 5th is free. We receive a frequent raise dead card, and are given 2 stamps for the previous work.

We leave and spend some time considering how to inflict some pain on the church but we're a bit stuck. We are also very poor....we can't raise archon. We go back to break the news to Dan and Jane. They take it pretty well, with the noting he wasn't all that useful quite often and was totally grumpy. He hope to hire another cleric in town before we leave, and plan to haul Archon to compliment so we can find out from Gideon what the proper burial rites would be. Damned if we leave him for the temple of light to manage. 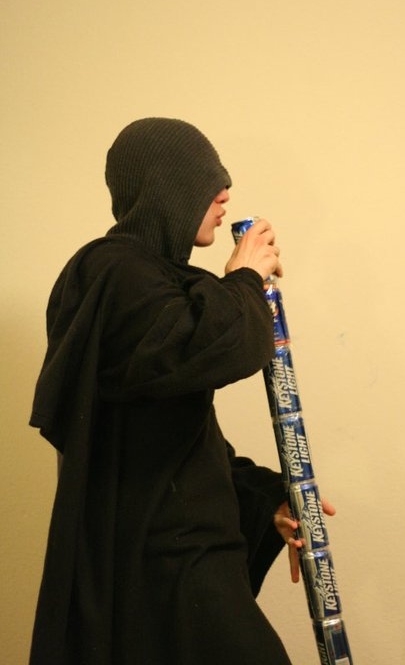 While Dan recovers from his Deathly experience the party cools it's heels in Shadowdeep. They decide to head to the tower of sorcery to follow up whether the thin wisp of cloth that survives of the robe of eyes (ignited by a duergar psyker) is at all redeemable for any useful purpose. As they are crossing the grounds of the school they see a group of mages engaging in youthful shenanigans. One is drinking dead from a flagon while casting some sort of spell that seems to involve a golden glowing fire catterpillar creature. He buddies are helping him by chanting......CHUG CHUG CHUG....

<hiccup> Something terrible happens. The caster explodes. The fire caterpillar suddenly grows dramatically in size, while bystanders flee, and promptly destroys the other boys. Jane briefly has a moment to curse the fraternities at the school that always seem to ruin everything. Then the beast is upon them. A blast of glass 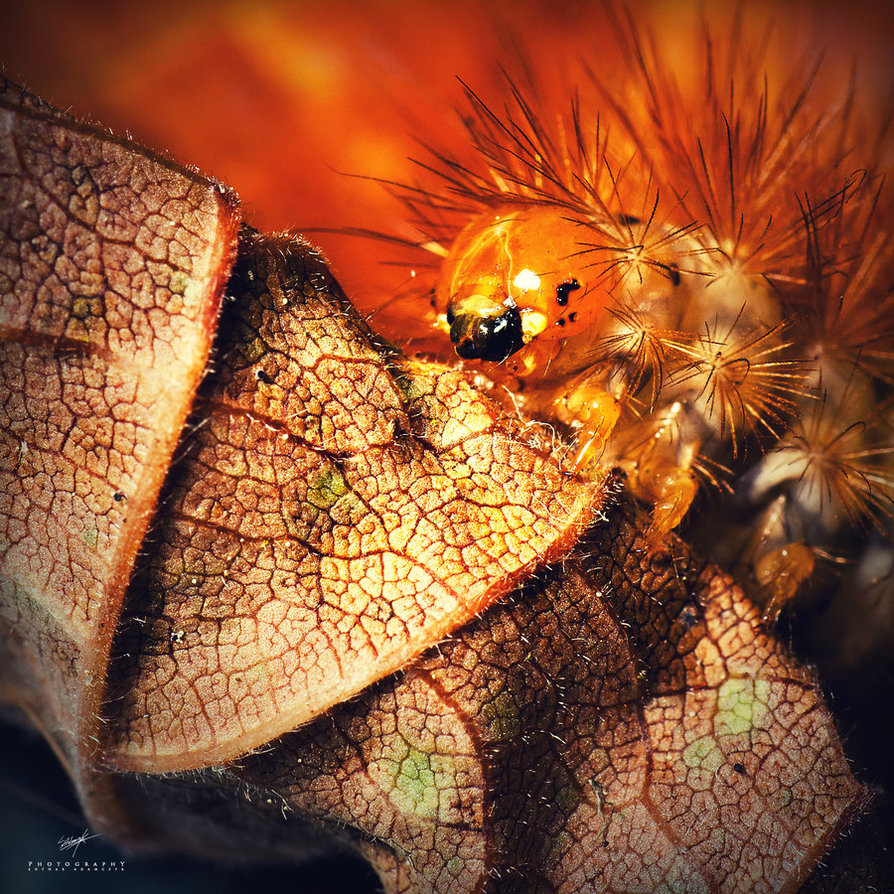 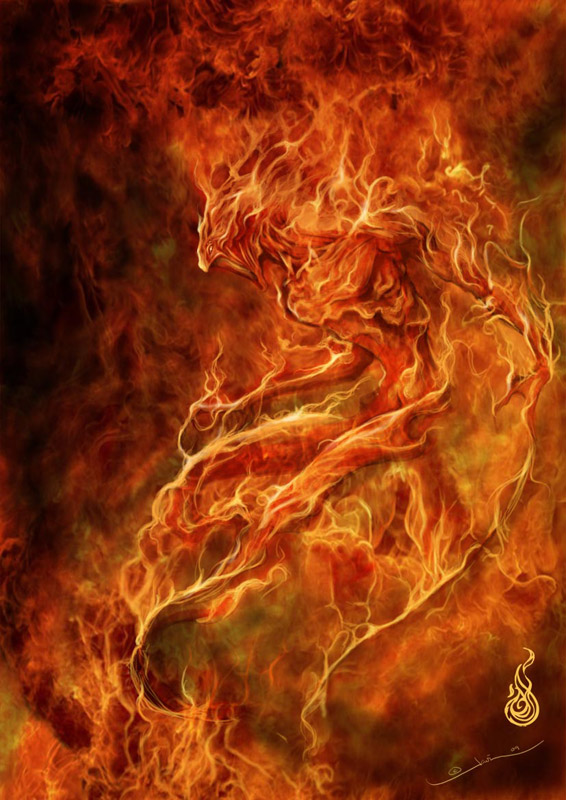 particles shreds the party knocking out Jane as she attempts to cast a spell. Jenks manages to stay upright but loses his spell as well. Another few rounds see Renault go down under a flurry of claw and bite attacks, Jenks crashes to more glass shards, and Scabs is nearly dead while still attempting to fire arrows at the beast. A 11th hour rescue occurs as finally the faculty manages to blast the creature with a salvo of magic missiles (and worse).

Invisible servants quickly haul the party to the infirmary where a priest to the god of magic is able to render them some aid. The headmaster meets them in the infirmary and arranges a private meeting by the expedient of demanding everyone not unconscious leave. After thanking the group he offers a quite reasonable bribe for the groups silence......no sense in worrying the town at large and/or creating an environment for more regulation. We take the moment to request the headmaster examine our remant of the robe of eyes and discover it can function as a blindfold of eyes. An impertinent comment by Jane ends up gaining her some demerits and loss of her section of the bribe. It turns out she has another 3 months of work term before she can complete her credit transfers and finally write the sorceress test. After the talk Jane hurries off to the registration building to follow up on some school matters. In another bout of tying up loose ends, Jenks notes he still has a sheaf of papers recovered from the late merchant Dabas' house. Some appeared to be deeds, but they were written in legalese. Jane recommends a barrister in town who gives student discounts and is known for getting mages free of reckless endangerment charges. The party heads over to the barrister Lionel Hudson......who has a side business of cobbling. The papers are shown to be all owned by the late Dabas.....with the exception of a silver mine. Often mine speculation results in such frequent transfers that it's easier to have a bearer bond type situation. The party now appears to be the owners of a mine that is located to the Northwest of Shadowdeep, about a day north of some nameless village. Lord mayor Scabs snickers.....sounds a lot like Compliments. The remainder of the documents are left with Hudson to return to the Dabas heir.....contingent upon a finders fee. 2 Weeks of opulent adventurer living and the party is ready to leave town with a mostly recovered Dan.