Jenks, Dan and Jane all are finally freed from their lycanthrope treatment. Scabs has managed to sell the glowing blue ring (a ring of continual light) to finish paying off the cost of treatment. While dickering with the wizard (one Helminster), he finds out that the wizard is willing to sell a powerful magic robe (The robe of eyes) for the princely sum of 50k. Not like we have anything near that amount...we're actually mostly cleared out at this point.

We proceed to leave shadowgate and head towards the dungeon, pausing to sleep at compliments. Thought the snow is deep, there has been some steady progress in building labourer housing. The smithy of Gideon is pumping out some steady amount of tools and we can see our training militia has better equipment. No reports of abducted villagers has come back to us. Thank goodness for small favours, we already have enough on our plate. 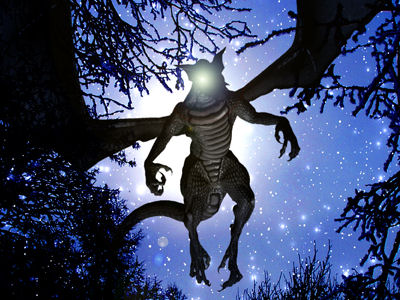 We continue to head north towards Greenich and the crypt of Kas, despite the worsening weather. It's been a tough winter, and there seems to be a new storm brewing off the ice fang mountains. Jenks, the druid, decides to find a safe location to weather what appears to be a bad storm and leads the group off the road towards a forested gully. As they descent the icy treacherous path they hear the boom of wings and chilling screams of a massive beast above. Passing his wisdom check, Jenks decides it is an arctic dragon, and the group picks up speed a bit to get into the safety of the narrow gully.

Once on the bottom they scout out and find a mostly buried cave entrance. Entering only the front portion they send the dark seeing gnomes, Scabs and Chester, and dwarf Archon to scout the deeper portions. A pile of wolves near some sort of door is discovered, the wolves appear to be hibernating. The scouts report back and Jenks decides to go cast animal friendship on some wolves to help head off problems and recruit some allies. Unfortunately the approach of the Druid and the 2 fighter escort seem to wake the wolves.

The first surprise occurs when the wolves start yipping and growling amongst themselves as if conversing. Jenks casts speak with animal and attempts to parley with them, asking only to stay the night at the front of the cavern. The wolves do not want their master disturbed and are fairly hostile. Jenks attempts to reassure them, and notes that blood will be spilled if they can't come to an agreement. The wolves charge. 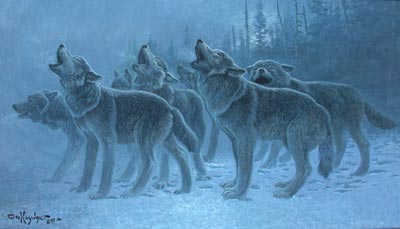 The second surprise comes when the wolves breath blasts of icy cold damaging wind on us. We are facing something tougher than normal wolves. Jenks manages to cast some hold animal spells and eventually the fight turns into a mob up operation. Archon deciphers writing on the gate and it speaks of a lord with a cold heart that should not be woken. We decide it's probably the dragon and we proceed to ignore the door completely as we camp. There's a hint of loot in the cavern, and we decide to skin the wolves for their wonderfully warm looking pelts. It turns out this was a fantastic idea as the pelts are winter wolf pelts, a rare and endangered (Jenks feels bad here) species with valuable pelts.....VERY valuable.

Overnight we all sleep poorly and have nightmares of the gate opening and something terrible coming to get us. When we look in the morning we find all the wolf carcasses are gone. We get the hell out of there and decide to head back to shadowgate with our lootz. Shopping around we manage to sell the pelts and buy the robe of eyes. We finally decide to let Jenks wear it so he can cast faerie fire on invisible enemies.

The massive sale of loot counts for xp and pretty much every character levels up. We are much more prepared for our next run of the crypt of kas the bloody.
Posted by daveb at 9:58 AM No comments:

We did some quick out of game shopping and hiring of henchman. A new welcome to the henchmen Archon, dwarf cleric, and Jane, human illusionist. In addition we hired a slew of hirelings (5 carpenters, 5 masons, and 20 porters) to start work on housing in Compliments, along with the expensive Dwarf smith Gideon, who should be able to keep them supplied with tools etc. 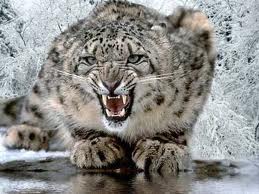 On our way back to Compliments one of the porters was dragged off into the trees by a snow jaguar. Though Dan and Jenks were facing the beast, the porter was obviously dead and they decided to leave it to it's kill. Not a super popular move for the hirelings however.

A brief stop in compliments had Renault (Marshal Renault now) give us an update that some outlying farms to the North had been raided and the inhabitants disappeared.  Speaking with animals Jenks had a report that some furry people with big fangs who came along the dark line in the forest (the road) had done it, and they had come from Greenich to the North.

The party (Scabs, Chester, Renault, Dan, Jenks, Jane and Archon) head north. After their first day of marching as they are looking for a camp in the frozen winterscape they hear the calls of wolves. Crap. As an aside our GM LOVES the move 'the grey' and suggested to me if I don't see it soon there will be lots more wolf attacks (at this point it's a bit of a meme in many of his games).

We race towards some tall rocks and propel the squishier members of the team on top. Archon demonstrates himself to be somewhat craven as he scrambles up as well. As the wolves come rushing in Jenks manages to cast a charm spell on what appears to be the alpha wolf. As the group pauses and asks Jenks what may happen, he says it depends on if the wolves follow the lead of the alpha or not. 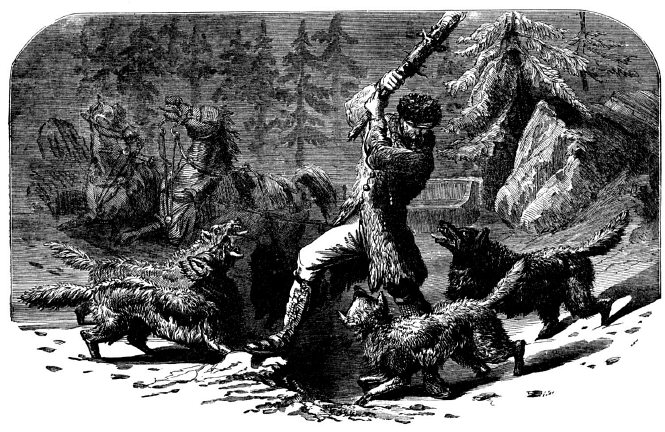 'Pretty unlikely pal' comes a mysterious voice that Jenks attributes to Archon (the new guy) at first.
Jenks is now subject to a surprisingly well directed 5 wolf pile. During the next few rounds it comes rapidly obvious that these wolves are 1/. totally tough and badass. 2/. start speaking human. 3/. transform into a human shape to try and escape from a snare trap the thieve scabs rigs up.

We are facing were-wolves. We are so toast. Jenks is down spewing bright red blood on the snow. Dan is heavily wounded. The alpha wolf is helping us actively now but Janes single 'useful' memorized spell of colour spray can't affect these monsters.

After a highly touch and go battle, and some late finally decent rolls by the fighters, we find a trapped werewolf to question, and the final werewolf is sent fleeing, pursued by the charmed leader. The trapped werewolf is dispatched fairly quickly after being less than forcoming with information and highly threatening to us. 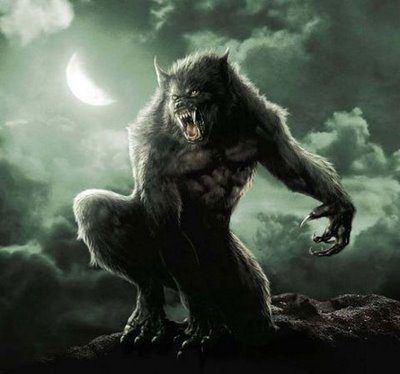 The leader returns and tells us of what the life is like: No recollection or control for years. He is offered the opportunity to come to town to help leave this life behind but he refuses; he rather likes his current lifestyle. We encourage him to stay with us while we try the belladonna cure (located by Jenks spell).....after all should it fail then he will have more pack members. After treatment Jenks casts PLANT GROWTH on the Belladonna patch which erupts in uncontrolled growth catching and destroying the final werewolf. The 3 afflicted members (Jenks, Dan, and Jane) all fall into a coma.

I'm cut out of the gaming session for a bit as all my characters are incapacitated. Upon recovery after 3 days we get the great news that NONE OF THE CURES WORKED. Detect evil has shown us all to be afflicted. It's 9 days to the full moon and we're 8 from shadowgate. We start hauling ass to the capital city. Dan goes wacky and disappears for a week leaving his gear behind, but finally reunites with us (after apparantly eating all the chickens at a farm by Compliments) just before Shadowgate.

We find a very good, very generous church of good. Galandrel (I think? spelling?) is the goddess of Peace. The priestess offers to cure us but the treatment takes a month, and involves  imprisonment and a heavy cash price of 500g per member. Jenks is cleared out completely to fund 2 cures and Dan hands over an unidentified ring to Scabs to assess and sell. It's been a costly trip to Greenich that didn't even succeed. More ominously there is yet another costly lapse in time before the party can return to the Dark Crypt.

Thrice damn the random encounter tables....although really those are a huge element of the fun in old school D&D.
Posted by daveb at 11:11 AM No comments: 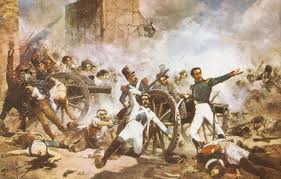 Campaign update
I suppose it's not all that unusual when a campaign falls apart after the first battle occurs. The meshing of a campaign system to a tabletop gaming really does attach two quite different games together and requires a fair amount of commitment from numerous people.

In any event, the game has been on pause for a few weeks now. I think the primary problem is so few people are set up to game out the battle themselves. This puts a high load on Gavin, who I understand is working a fairly new job with a much larger commute. It's hardly fair division of labour considering he has a family AND needs to debug the system.

Here is the writeups by Mike and Gavin.

At this junction we see another source of trouble for the campaign. The system wasn't explicitly built around the tabletop ruleset. This gives more flexibility by using #'s of troops and an ambiguous fatigue factor but it means that decision have to be made about which rules to use and how to port results back and forth. I think this has also stymied the campaign given that the result have not been re-inputted into the system.


Rules
This first/last battle was fought in 6mm with principles of war (which I managed to track down a copy for myself as I was interested by what I had found online HERE). One of the things that appeals to me about this system is the requirement for orders to be given to your formations. Between the orders, and the blinds, the variably amount of actions a given formation generates and the difficulty in changing orders for units you create a fair amount of friction in changing the battle plan on the fly. The use of blinds as either deployed or marching (basically is the rectangle lengthwise or width wise) seems very appropriate for the era. I'm hoping to get to a point where I can get in a game or three myself. I managed to find another example of play for a different era here.

Gavin/Mike noted (if not in their writeup then in the campaign forum) that the forces involved were a bit too large for this system. I know that Malcolm's campaign (the progenitor of this one) used napoleon's battles (the system I've been working towards for my own 15mm naps).

Figures
One of the nice results of the campaign is that I've been making progress on painting up my own napoleonic figs. It's a pretty steep cliff you need to ascend to start playing in terms of numbers though. I'm working towards playing a 'small' napoleon's battles scenario with a friend in town, Marengo. The requirements for the french player include: 200 infantry, 12 command stands (of between 1 and 3 figures), 1 artillery base (~4 figs), and 36 cavalry. This doesn't include the breakdown of cavalry and infantry into their different types (light, line, hussar, etc).

I intend to get some pictures of the progress up soonish.
Posted by daveb at 10:18 AM No comments: