I managed to meet up with a gamer via the gruntz yahoo group to try this rule set I've owned for perhaps a year, but not yet had a chance to play. Dan, who is in town for a short while from the East coast, jokingly suggested this may be the 3rd game ever played in Canada. Players seem a bit lean for sure.

We took a fair amount of time to get rolling, as we hadn't chosen armies and needed to print out some play cards. Once underway we played a 250 point game (mid sized) in about 4 hours. This included much chit chat, lots of rules look up, and playing with random activation which I think probably slows things a bit, but is way more interesting and fun. I expect that with practice the game would substantially speed up. Also helpful would be a bit more table space and the ability to have your cards on a sideboard or nearest edge, it'd be faster than turning over to consult your stats all the time (or indeed if you knew your army better).


Remember that all pics will be bigger if you click on them. 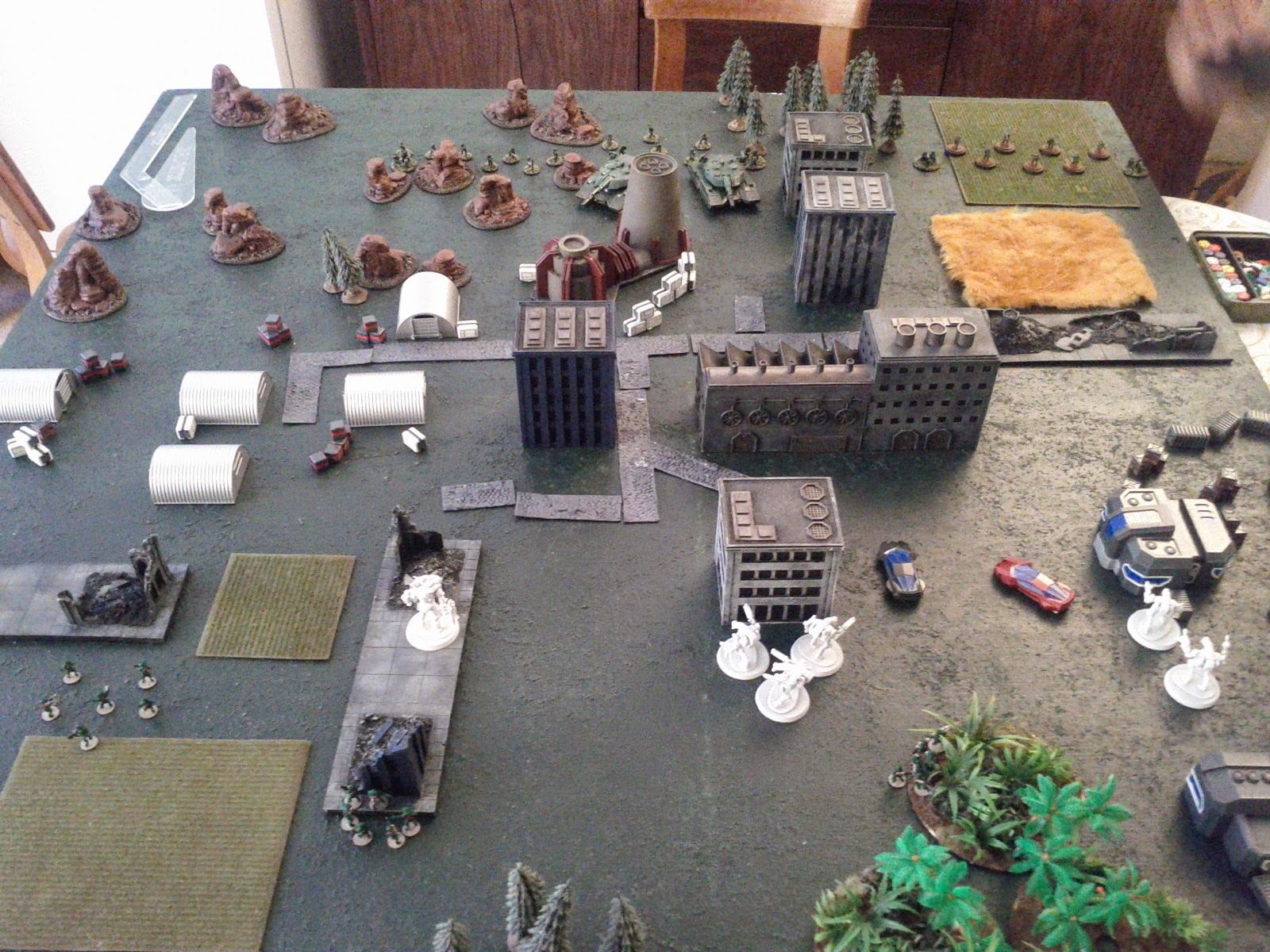 Bottom of turn 1. All forces moved onto the board from the long edges. NAC humans start on the top, with 2 siler heavy tanks, 3 squads with full automatic weapon squad attachments, 2 mortars, and 2 heavy weapon teams.

The crusties are on the bottoms with 2 bare bones squads, 1 tall command mecha (on the left) and 5 smaller scout mecha in the centre and right. The crusties all were quite difficult to hit with high guard ratings. 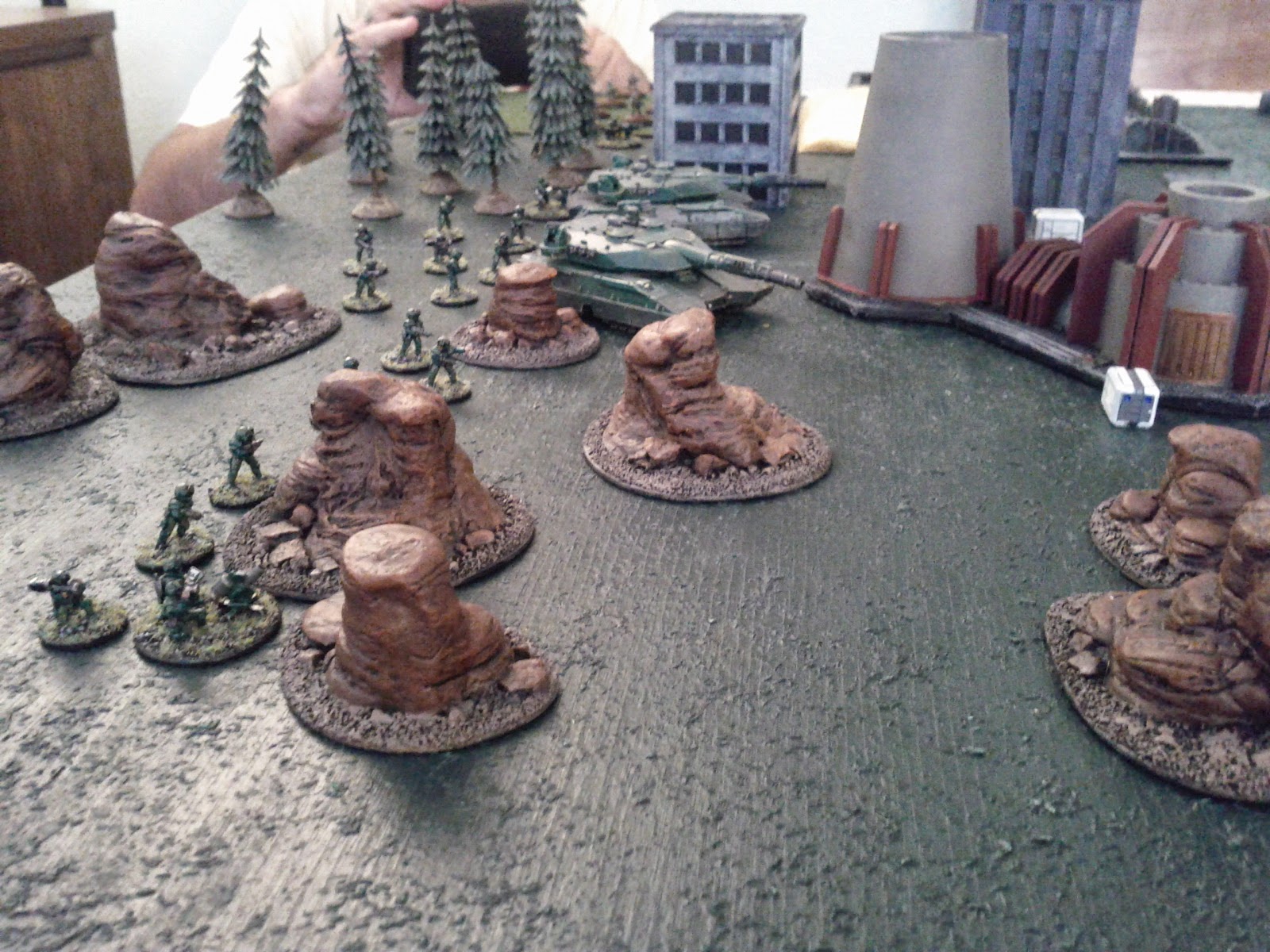 A better look at the NAC advancing with the Silers through the badlands on the edge of town. 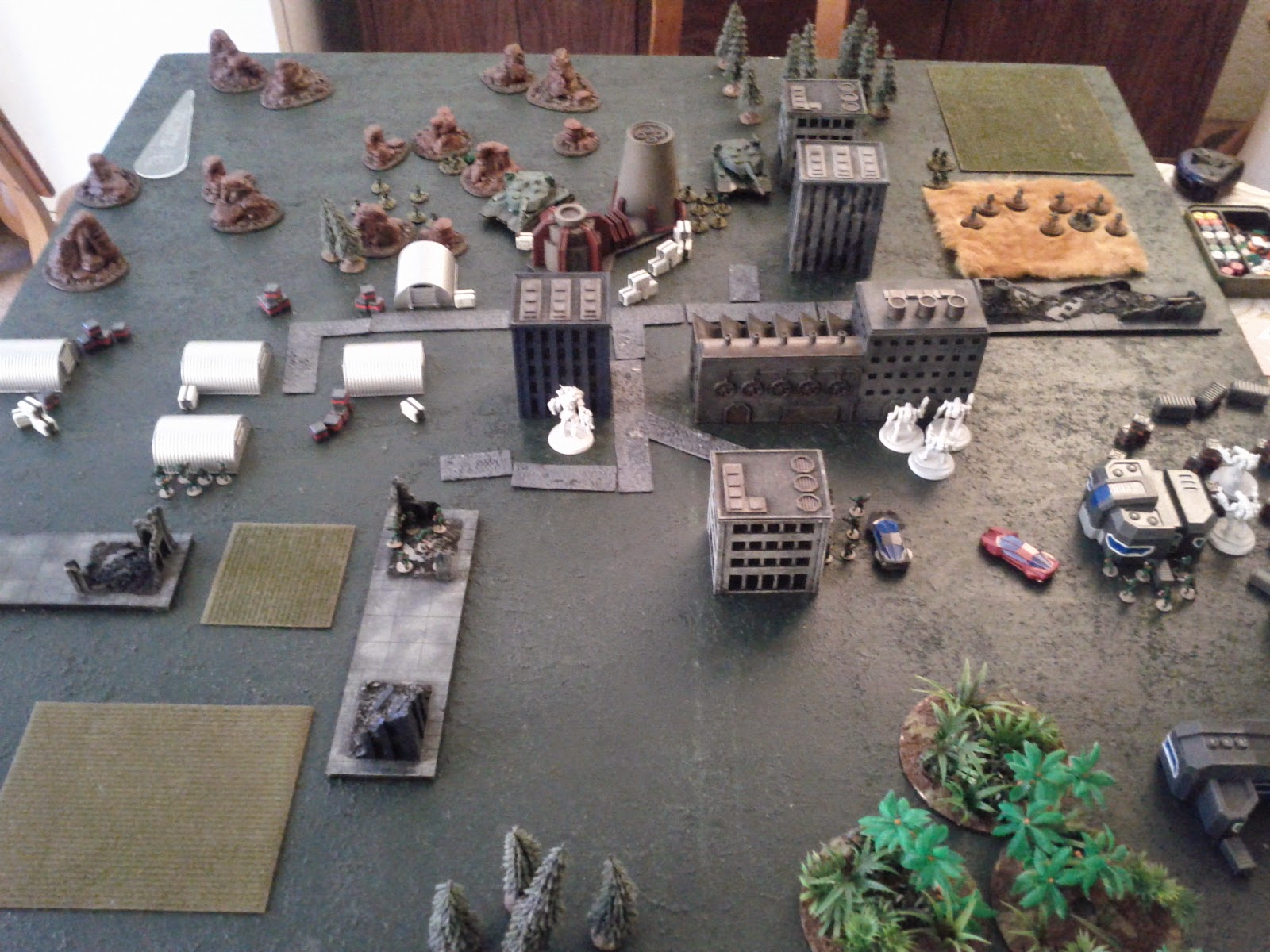 Bottom of turn 2. Both sides continue to advance at maximum speed. Ranges are quite short for effective fire combined with a decent ratio of terrain meant we could close quickly and relatively safely.

The humans have taken cover in the corn field on the right with their 2 heavy weapons and a gruntz squad. The crusties scout mech have all swung this way to focus on them. 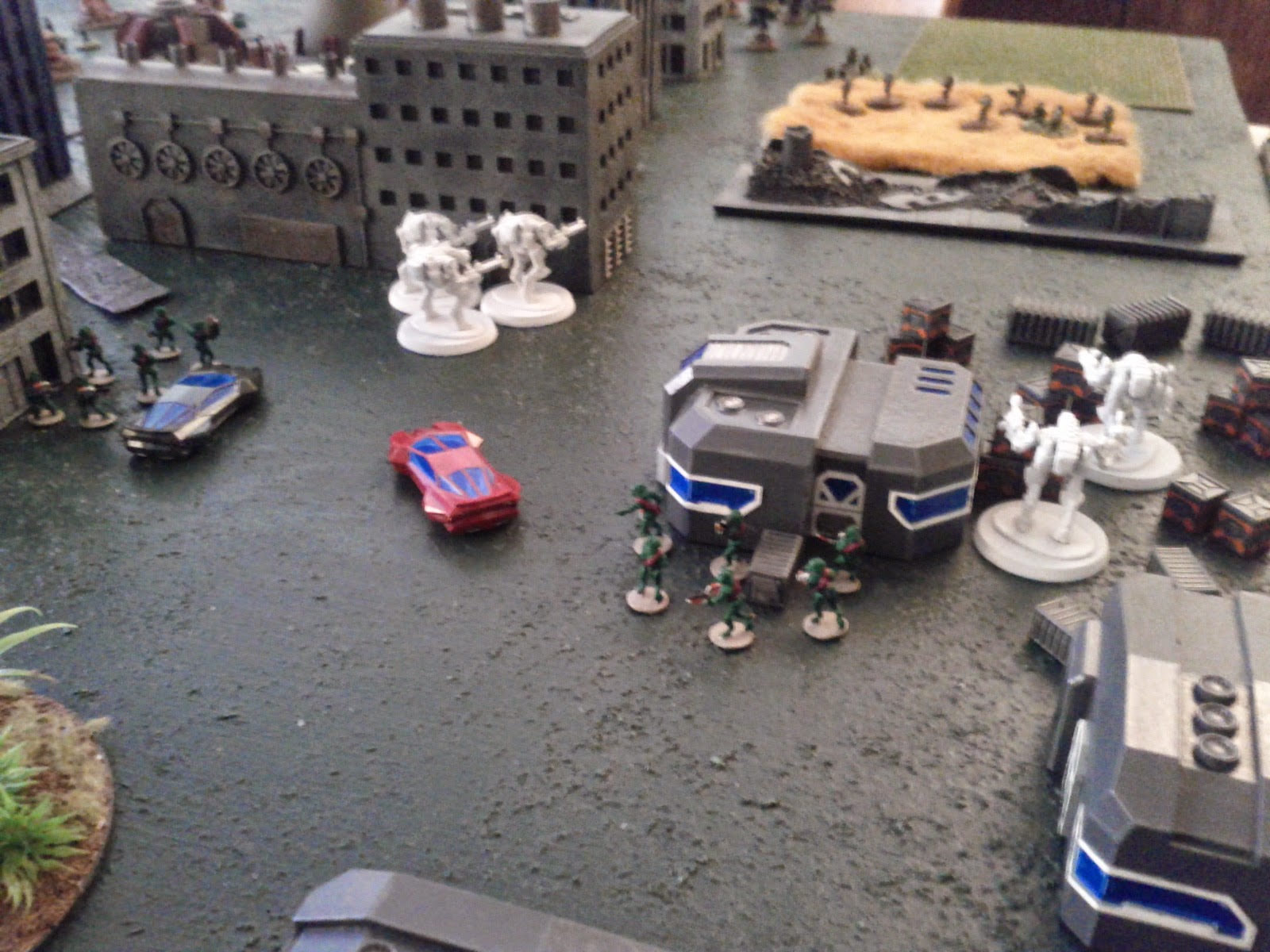 The crusties mecha in winter white camo (cough cough) bouncing through the crate area by the tech park. A nano tech ruined building (complete blog lies/fluff) lies between them and their enemy. 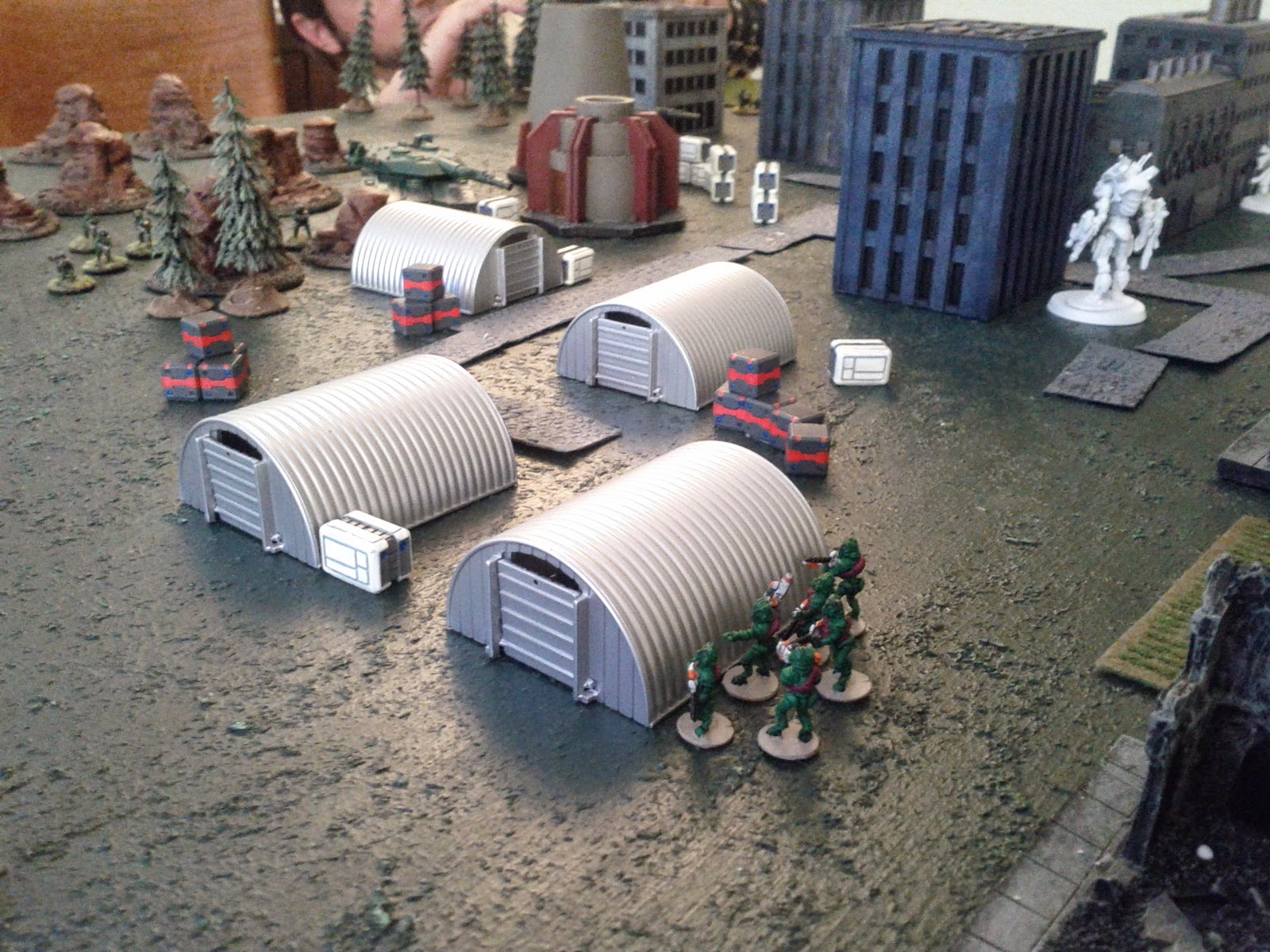 Left flank we see the other crusty squad hiding in the hut agricultural area. In the distance the swarms of humans and tanks can be seen. 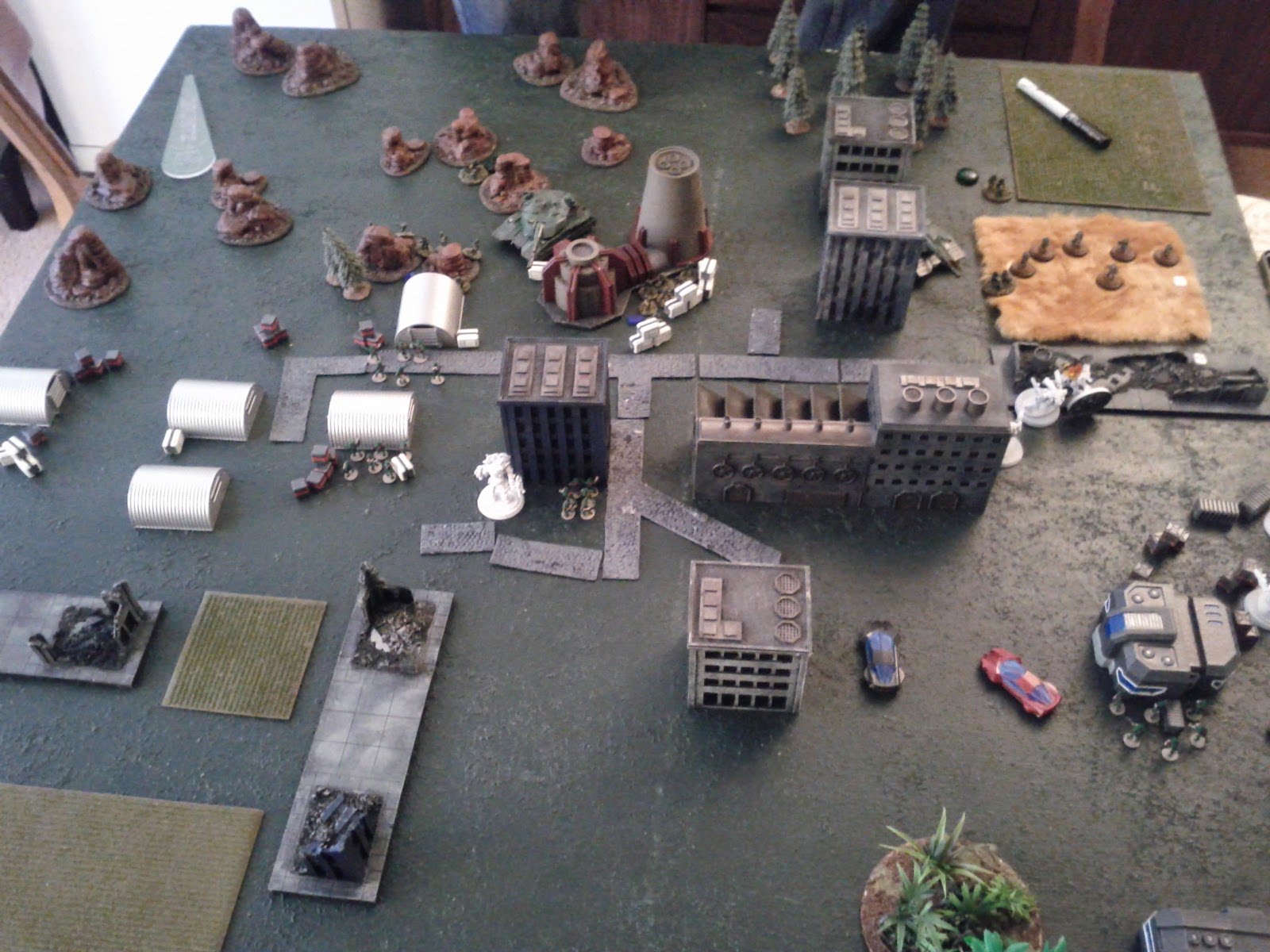 Bottom of turn 3. On the left the infantry have largely avoided gunfire and continue to manuever towards each other. A siler and the command mecha have gone into hull down positions and are showering each other with gunfire. The mecha is avoiding most of the shots, and the siler is simply tanking all the hits.

On the right the scout mechs bound forward and find their weapon loadout is overkill for gruntz, but effective on the heavy weapon teams. The other siler shows up to demonstrate one hit, one kill shooting technique. The crusties have gotten 3 squads close to the humans lurking in front of the power plant. They/I intend to assault them (if only to learn the rules). I've lost a pic here but 2 squads were in within charge range (in the open) and had botched throwing grenades at the hunkered down human squad. 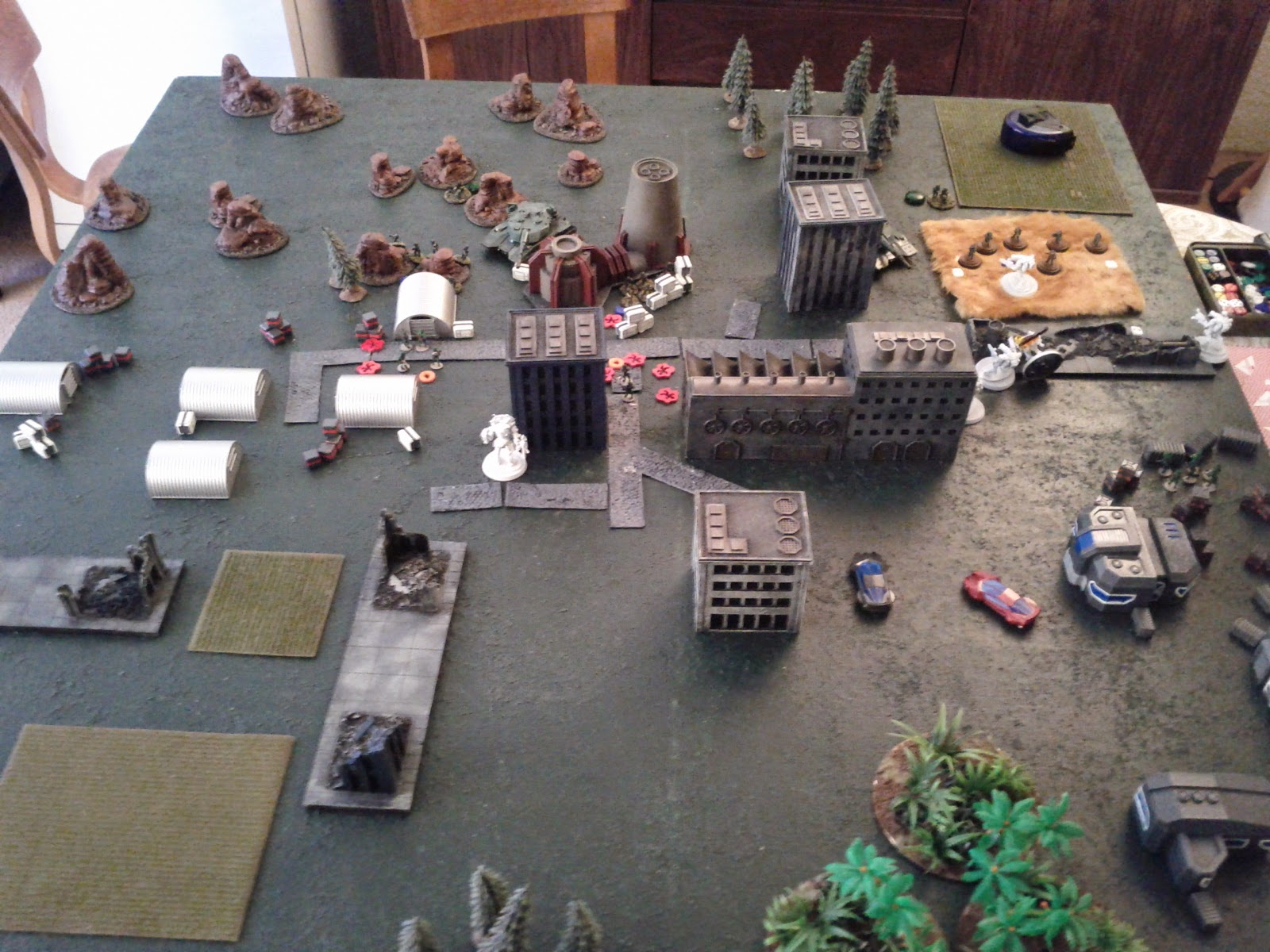 Bottom of turn 4. More pressure on the humans on the right. Gunfire battles with the tanks and mecha continue.

The big swing in the game happened with some highly effective shooting from all the human squads before the crusties could activate their grunt squads. This is the wonder of random activation.....nothing is totally certain. The large amount of red in the centre of the board is all my lost troops; one squad annihilated, 1 halved. 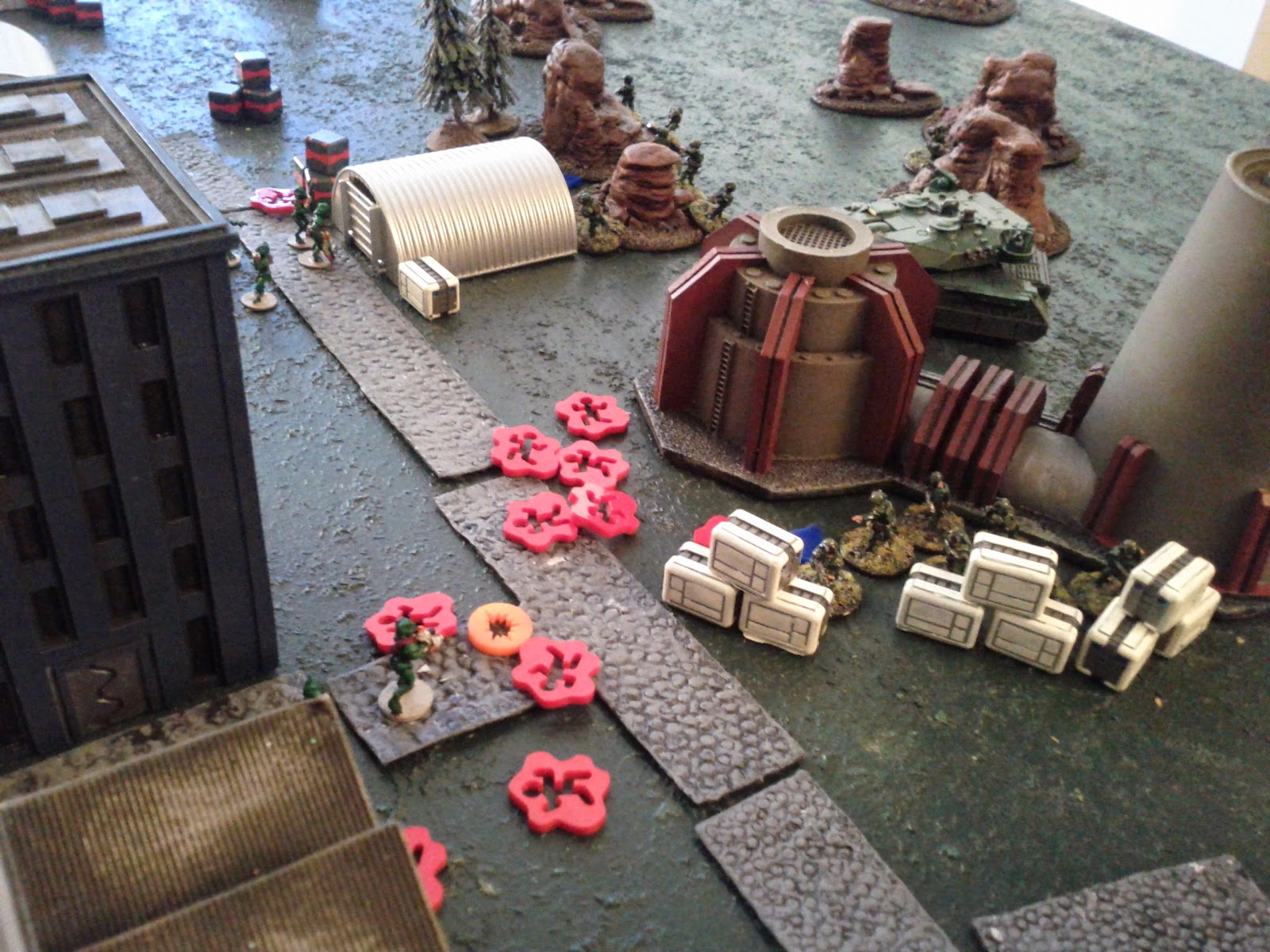 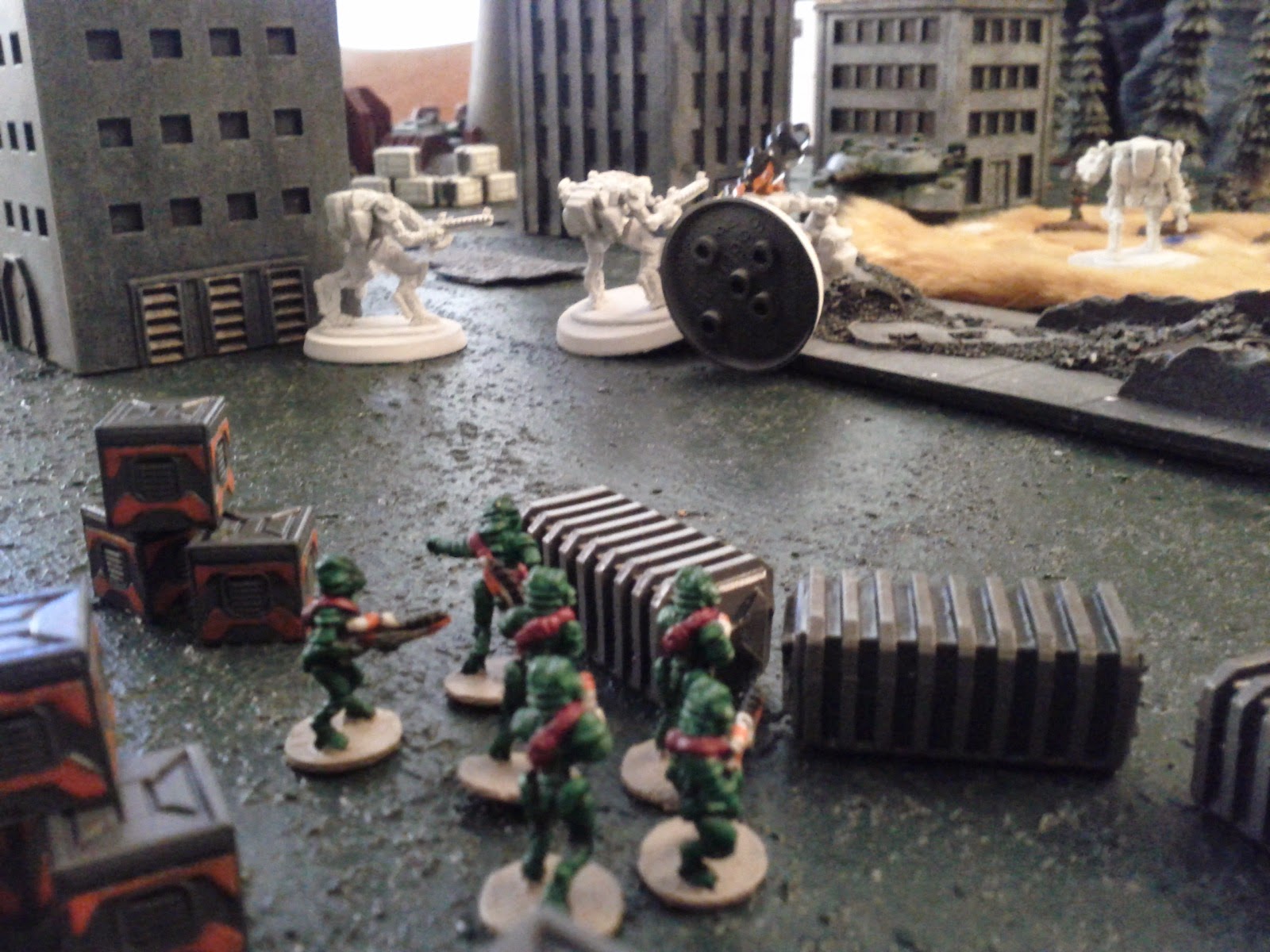 Another look at the trailing crustie squad moving up. Also in the distance we see the siler that is busy racking up scout mecha kills whenever it actually manages to hit them. 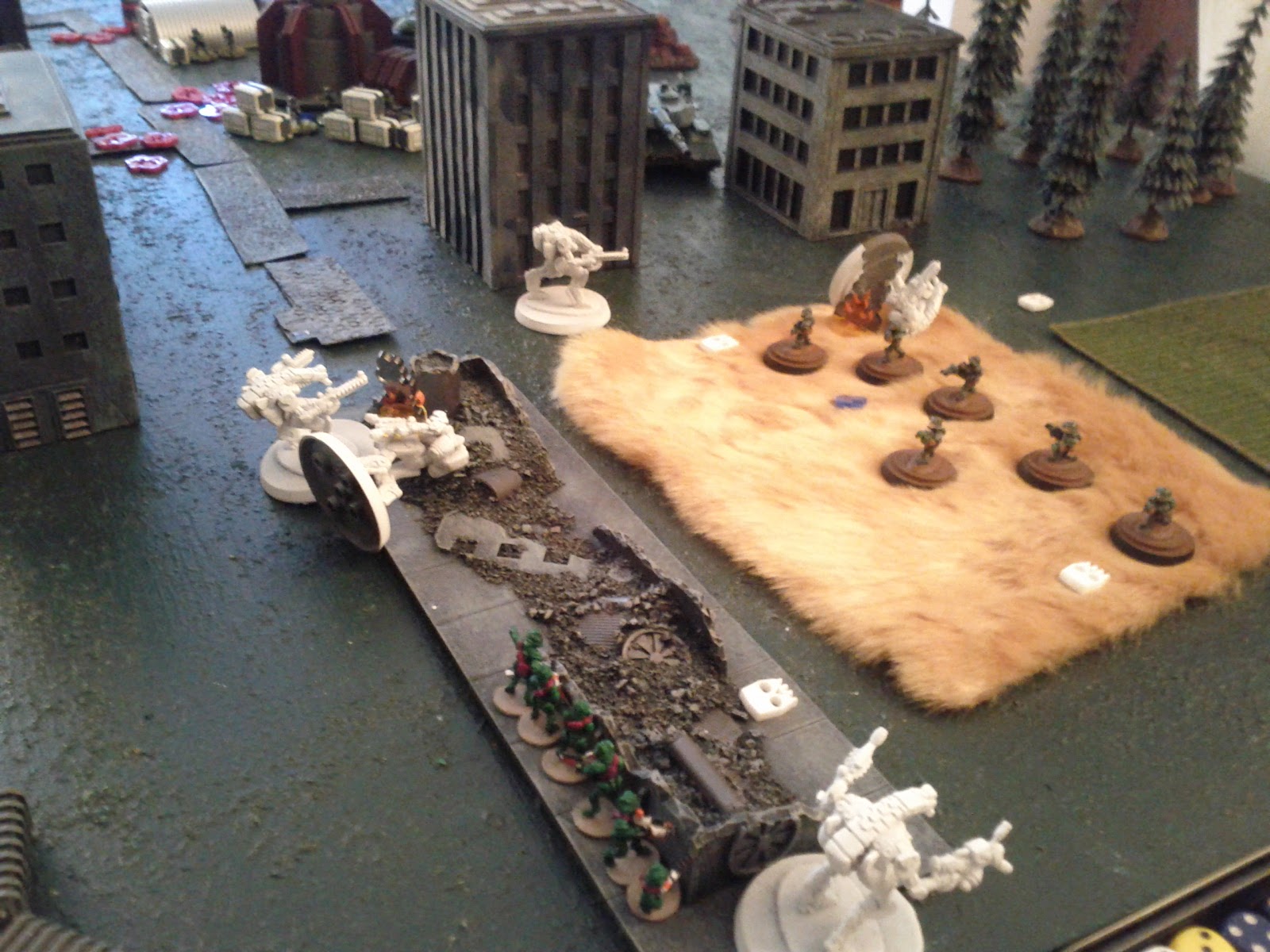 The crusties move up and are within range of assaulting for the next turn. 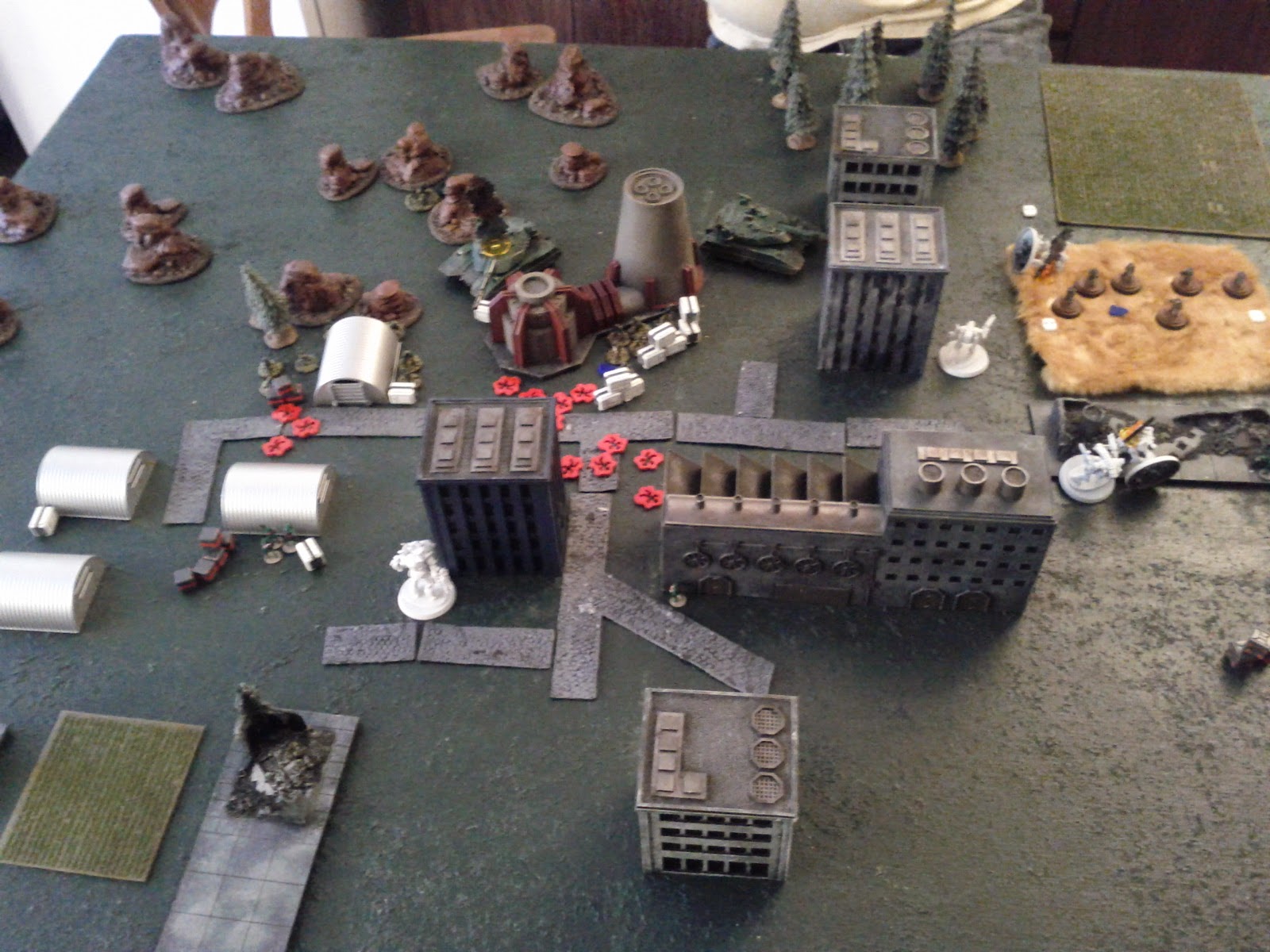 Turn 5. The pressure on the right has seen all the support weapons destroyed. The silar has moved back to protect it's flank and rear. We are down to 2 scout mecha, 1 of which is heavily damaged.

On the left the silar tank explodes in an exciting fashion but all the infantry are sufficietly far away. The command mecha is carrying a number of critical hits, reducing it's speed and armour/soak but is still a threat.

The crustie infantry squads on this flank are basically eliminated and survivors are retreating rapidly. The NAC are pursuing aggresively. 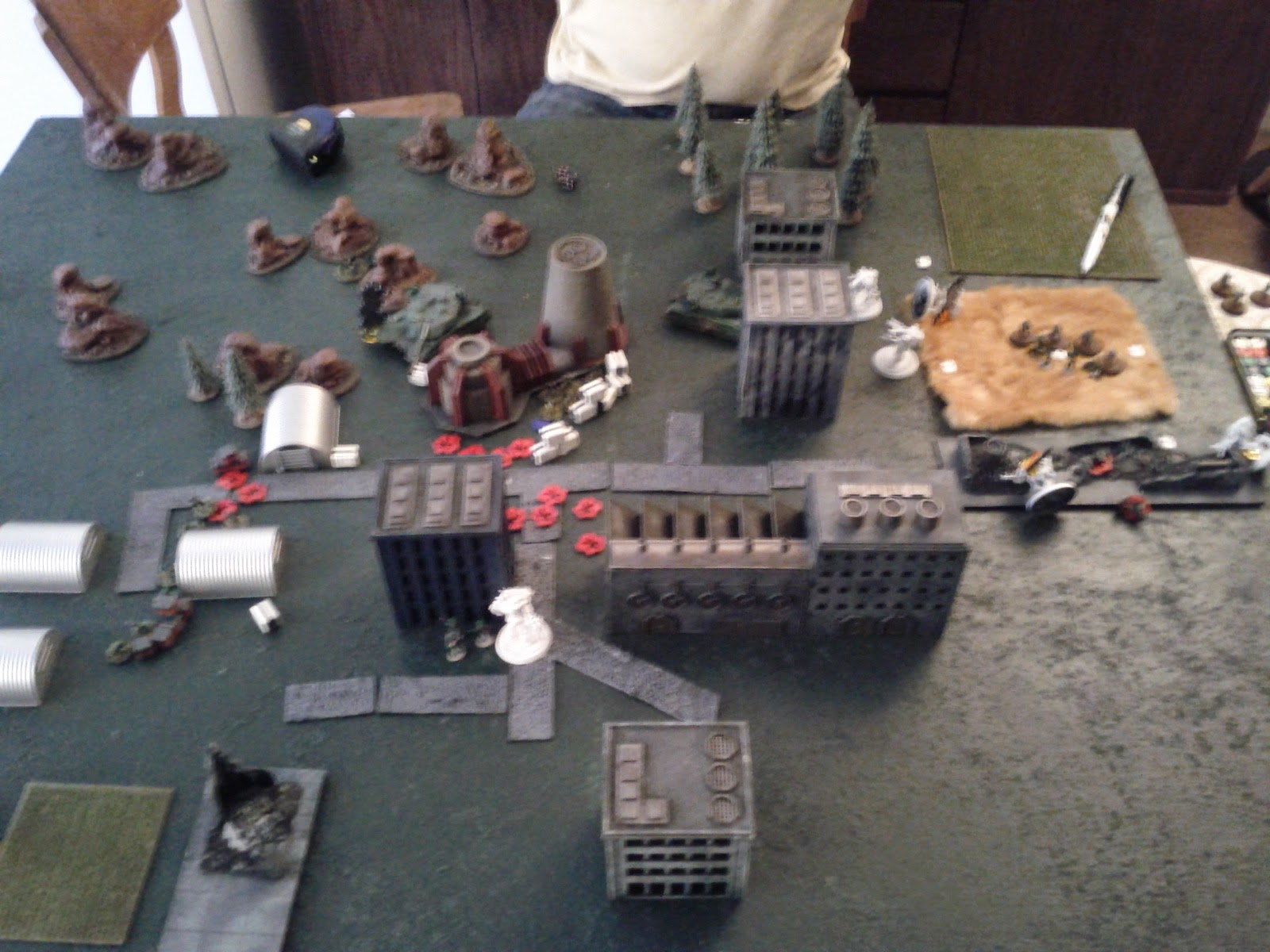 Turn 6.
The crusties and humans on the right have seriously damaged one another in hand to hand combat. The crusties continue, over 3 activations, to make their mental rolls, and eventually outfight the humans (who fail their roll) and run away in condition brown. They flee off the table in their own activation.

The command mech on the left redeploys to the centre to fire at the silar, missing it (like most of the mecha shooting this turn). The silar, however, destroys the command mecha in return, and another exciting explosion almost kills the remnants of the crustie squad lurking at it's feet. 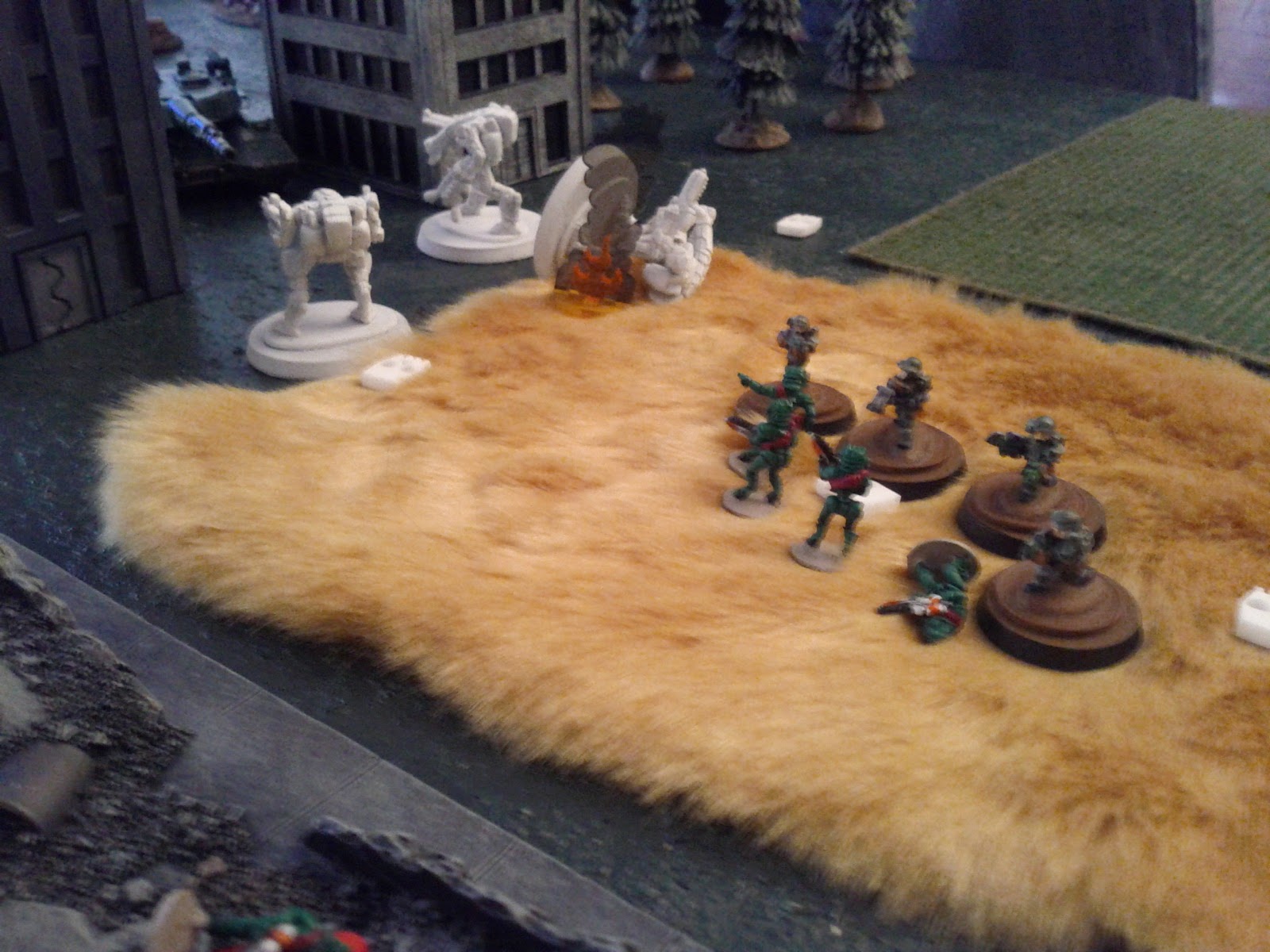 To the left we see the 2 scout mecha driving back the silar moments before one of them is destroyed by the silar secondary weapon system.

The humans are moments away from breaking.


Resolution
At the end of the game we assessed the table and I felt for sure the crusties had lost. When we calculated VP we found it was 8-7 with the humans squeaking out a win. Dan did note that it felt like a very close game. The lopsided nature of the last turn had coloured my vision a bit, and I agreed it could have gone either way for many turns. I think another turn would have swept the crusties away, but that's what time limits are for.

Thoughts
I'm hoping to get in another game soon, it's an interesting rule set that plays quite nicely. There were a few vague items in the rules, but nothing game stopping, and apparently there is some extensive notes/faqing that I haven't looked up which probably answers a lot of it.

Firing ranges seem a bit short, but that is an advantage as it encourages maneuvering rather than sitting and shooting. You can fire at double the rated range as well, but the penalty means you better be shooting at something big and slow (like a silar) or just plain lucky.

It seems fairly obvious that you can abuse the points building system, but I think as long as you are even handed and not min-maxing it shouldn't be an issue. It helps using other peoples thematic builds in this! For our game we just used a bunch of pre done cards hosted on the gruntomatic site. The card method with all stats on a single card is very useful as well. I expect warmachine players have known this for a long time.