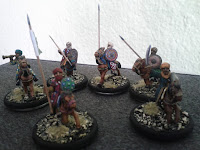 Oh dear, where did 10 weeks go? To be honest, packing up your life, and moving to a new home throws a spanner in any ability to paint, let alone to be consistently productive. The change in jobs didn't help much either. 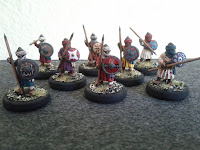 I'm still fairly mired down with household 'hobby' - painting rooms, repairing tools, 'converting' light fixtures, using pink insulation (for it's true purpose for a change), and so forth.  I think I've managed to sit down and paint 3 times in the last 7 weeks I've been moved. The short term doesn't look a whole lot more promising either. 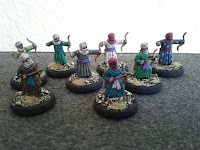 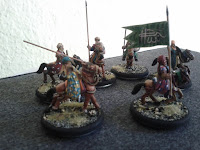 Goals achieved
-In regards to what my 6MMRPC goals were: utter failure -2. My trays of shame lie untouched except for Bones novacorp and my saracens  which were a delightful completion. Alas now that I've moved, my old gaming group is now playing SAGA Crescent and Cross. Cruel irony. 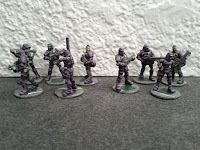 -Inspecting my productivity, I see that I did finish a few projects. Saracens, A battery of Warlord Russian Artillery, All my ainsty 28mm bits, Novacorp bones figs, and the vietnam Fortifications. It'd be a stretch to give the 2 Napoleonic generals a 'project' rating. I'm tantalizingly close to finishing another project in all it's glory, but I'll save that for a big reveal in a few weeks (or months....sigh). 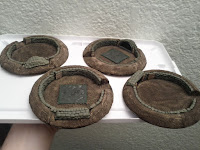 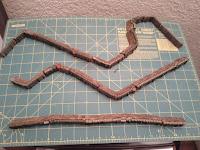 It's a shame the Caffeineforge blog went quiet as well, as that was a big incentive for me to try and keep up with Bones painting. I presume he'll get back on the air eventually, and I'll probably not have finished the last set of figs queued up!

-Zombtomber: no postings at all. Boo.


Input/Output
Given 2 jokers to start with, and 5 I earned, let's see how in debt I managed to go: 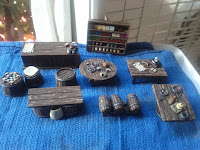 1- King's Minis chaos dwarves. I totally lucked out and managed to get a set before Delaney's life imploded. I seriously wondered if I was going to get them for a while as the shipping date lengthened and her posts got more ominous.

2- Front Rank Russian minis - a whack of lead that is part of the almost completed project. Unfortunately I botched a code in my email, and ended up with some infantry instead of the horse riders I wanted (I got the correct horses though. Doh).

3- TMP Front rank French figs - a clearout with a great price, this sets me up for working on the opfor for my Russians.

4 - TMP Demonworld - again, a great deal cropped up on 15mm fantasy figs. Demonworld have great looking minis, though they are hampered a bit by limited poses in the ranges.

5 - FOW Vietnam - cracked under the tanksgiving sale and bought some more figs. I really (REALLY) need to get a start on some of this stuff

6 - Armourcast Mutant plants & soda can toppers. I think I've been eyeing this stuff for literally 5 or more years. A 20% sale made up my mind

7 - Impulse buy at Heresy minis. A great sale (detecting a theme yet?) had me grab the lovely ghoul family, and some sci fi civvies. Unlike (arguably) the other purchases, this one doesn't really fit into a project. Ooops.

Summary:
Certainly less successful than my first go at the 6MMRPC. When I actually looked at what I had done and bought, I was pleasantly surprised....a lot better than I thought I'd have.

Community wise, it really seemed to quiet and nose dive just before I had to functionally drop out. It'd be interesting to see what others thoughts were. There some noise about starting up again quickly. I think it's some new blood, and some die hards. I'd argue for a couple month break, but it's rather challenging to control these things, frankly. 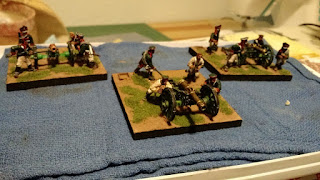