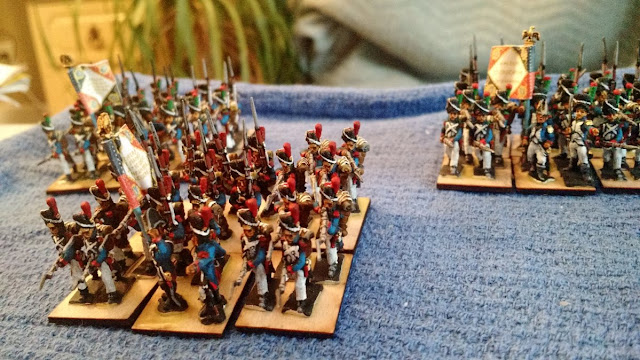 After running quietly for some time, I've finally managed to clear an old project off the painting queue. In fact, these guys were part of a failed resolution for 2015! 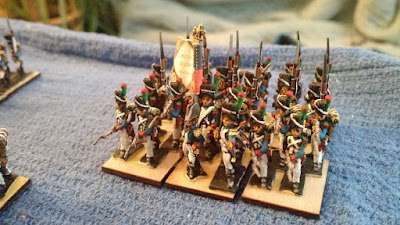 These guys are largely old glory figs, although there's maybe a 1/3 of 'other'. I suspect they are various iterations of minifig, but I'm not that great at these identifications.


They are based for napoleons battles/fire and fury, although many of the newer rule sets are base agnostic, as long as you are consistent. 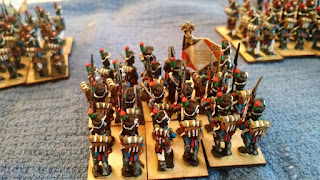 Part of the massive delay was trying to get enough guys to finish these units such that I'd never, ever, ever, have to come back and do more. Tracking down the numbers I needed was tricky as was trying to understand the guard formations (old, mid, young, constant reorganization.......so confusing).

I ended up with 12 bases of both the chassuer (2nd regiment w green and red plumes) as well as the grenadier (1st regiment with the pure reg plume).

Having been painting in 28mm for a while, they don't look quite as splendid as I hoped. I'm pretty stoked to be done with them. The flags could probably be trimmed or painted a bit to get rid of the white. ALL of my 15mm naps need to be based, which I'll probably do as a single marathon endevour. They also need varnishing, which is terrifying with the risk of frosting, so will have to wait to a hot dry day in the summer.
Posted by daveb at 10:35 AM 4 comments: