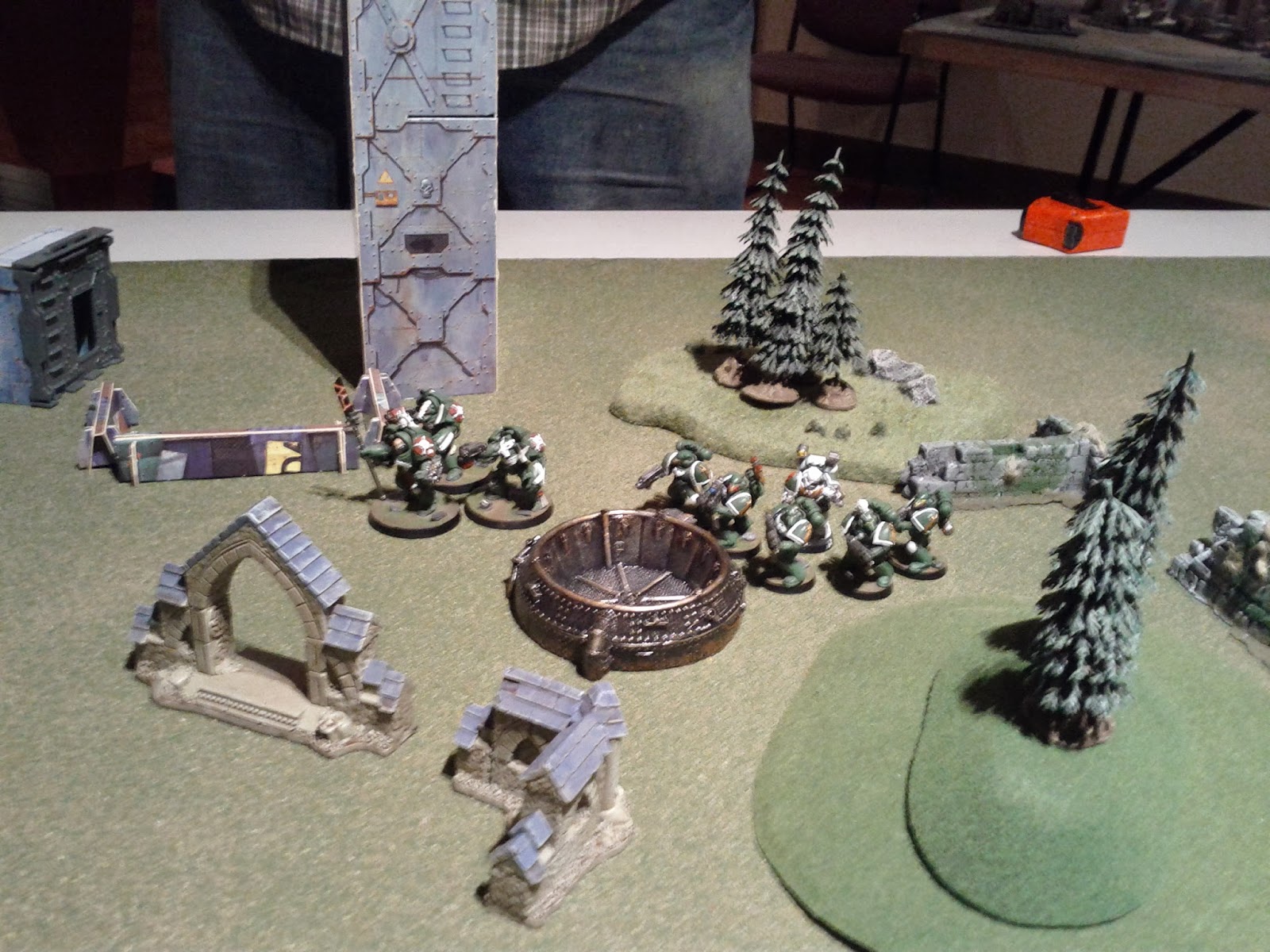 Up in Squamish I faced off against a small elite force of dark angels. No doubt sent to investigate the late tithes to the imperium, the space marines ended up being misdirected into a ruined town (the original site of the infection perhaps?). The marines finding themselves surrounded pulled together for a break out mission, needing to reach the far corner of the table, while whittling down their attackers. I noted that the entire table was sporting painted and finished models and terrain. A rarity for myself and my game crew, so this was a sweet treat. The marines set up first in the far corner, while the cult set up second, deploying in a broad crescent. Had I thought better about this, and read the mission criteria, I would have realized this was a big mistake. The marines could have attempted to destroy me in detail to force a bottle/run away check. Instead they stayed close together and pushed toward the other corner. This was a decent plan because as soon as they got close, I'd instant lose if I'd lost a 1/4 of my troops. Considering the quality of the lion share of my cultists (and their paper thin armor), this wouldn't be hard to achieve. 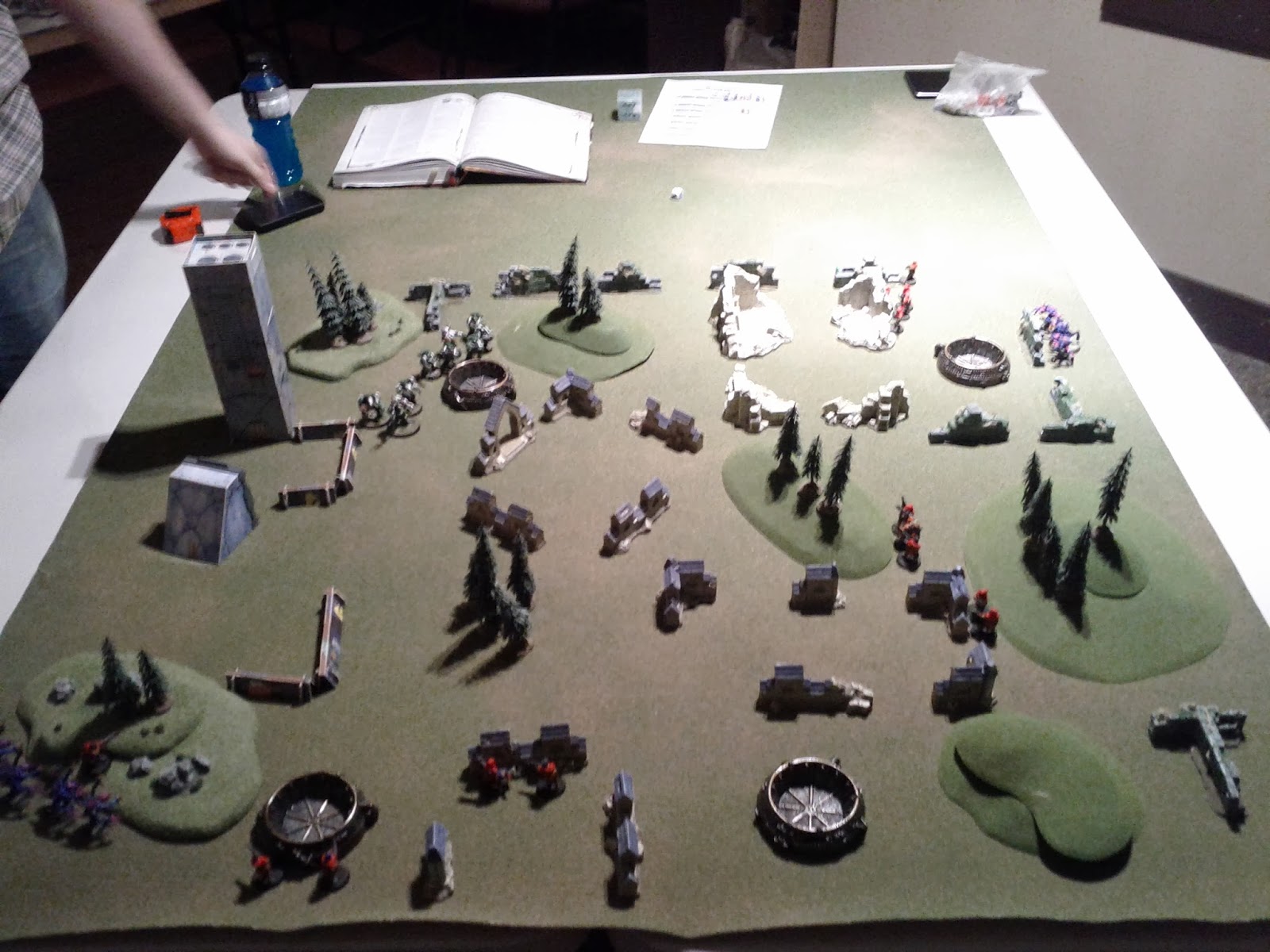 It's obvious from the odd light that this is the waning hours of the day. The marines have spent the daylight hours uncovering evidence of the presence of the insidious genestealer foe. Already it is too late and the marines realize that night is when they strike....... 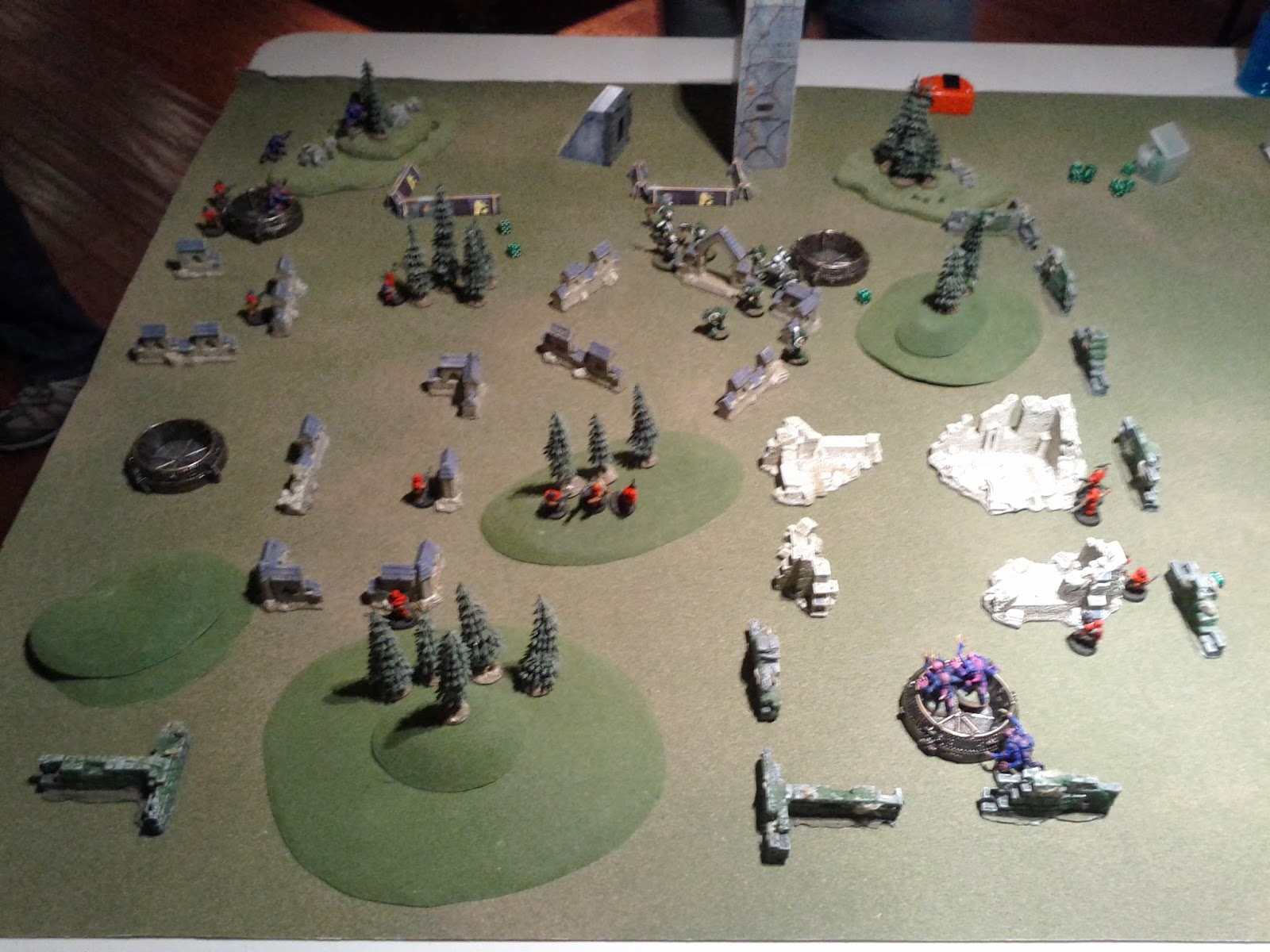 Turn 2: The marines have advanced to the edge of the first building. To the right the least useful cultist group is moving around to flank them. They are at risk of being outrun. Towards the centre the cultists are set up to burst through the treeline and subject the marines to some short range gunfire. 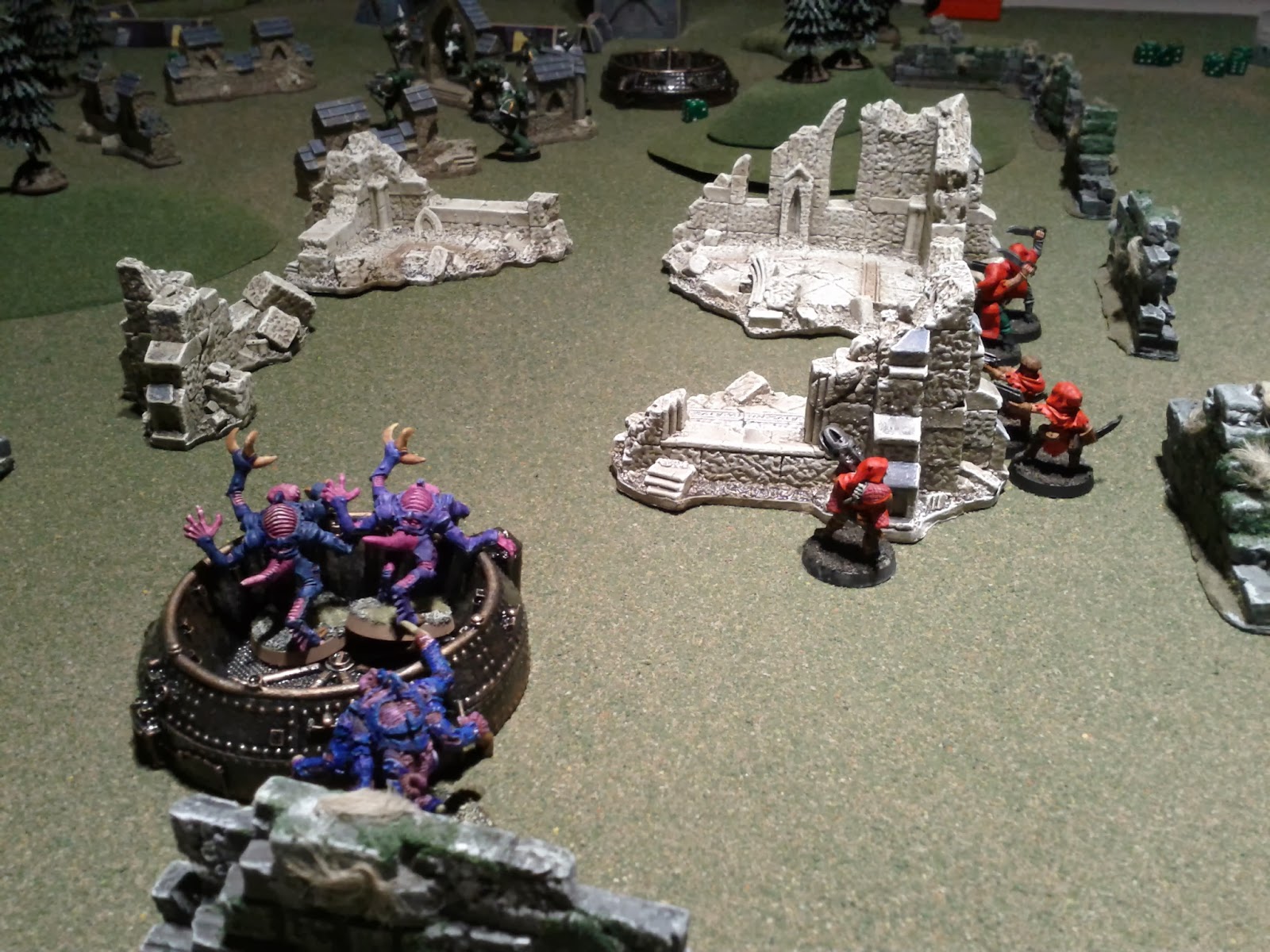 The marines were constantly frustrated by pour dice rolls, and hot dice by the cult. The kill team also allows the wonderful 'hide' rule from necromunda, which allows you to hug terrain and not shoot and be unshootable. This only works till they are about 6 or 9" away (I forget). So aggressive maneuvering can remove hidden status. A single cult member had a weapon that is a marine bane, a plasma gun, and was sniping away steadily from the vent. To the left we can see the lone plasma gunner hiding to the bottom right of the ruins. . 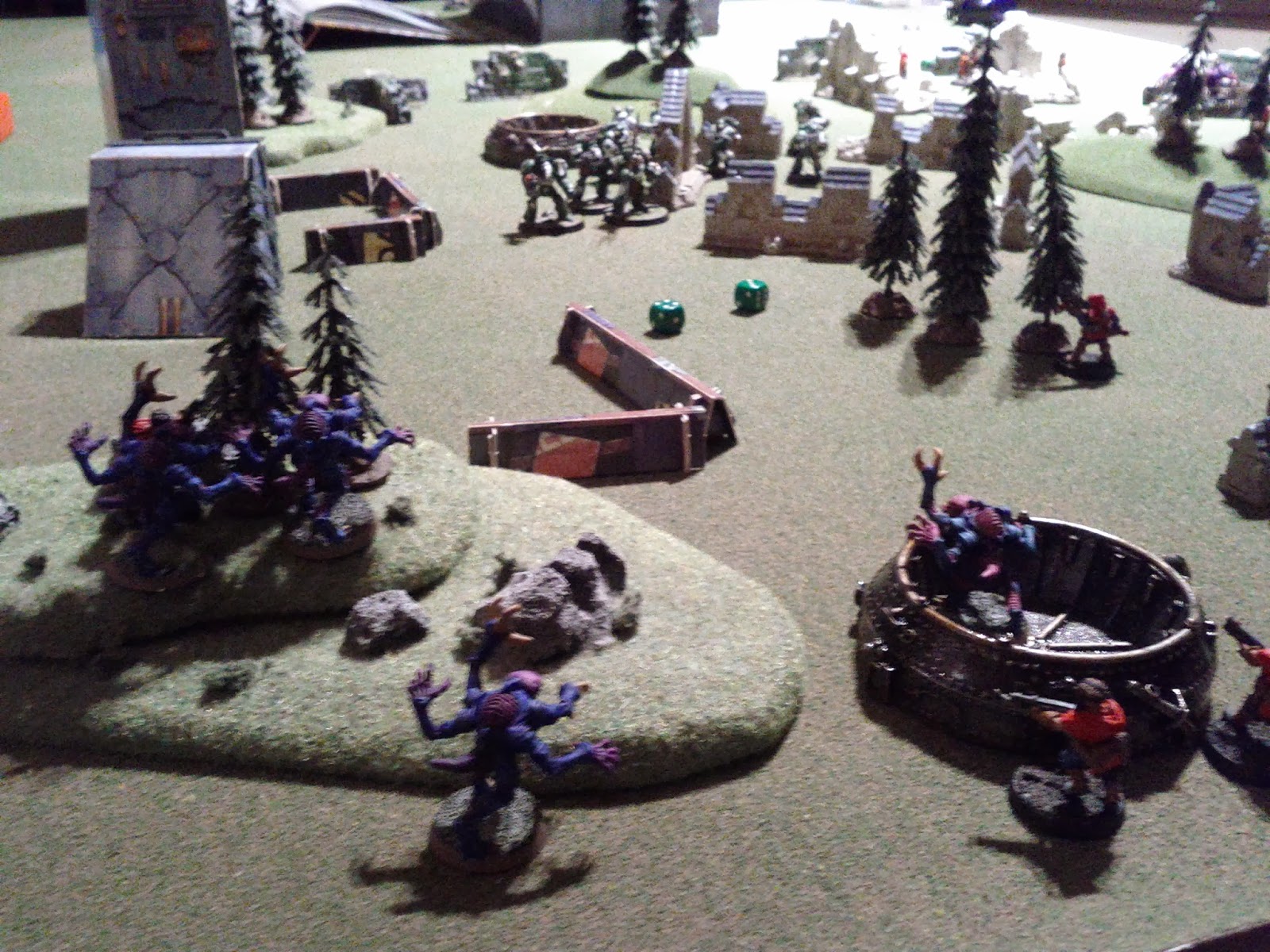 The marines continued to advance, while the genestealers hopped from cover to cover. These genestealers will be late to the party as their advance is across fairly open terrain. They instead move in a zig zag pattern wasting time to close. 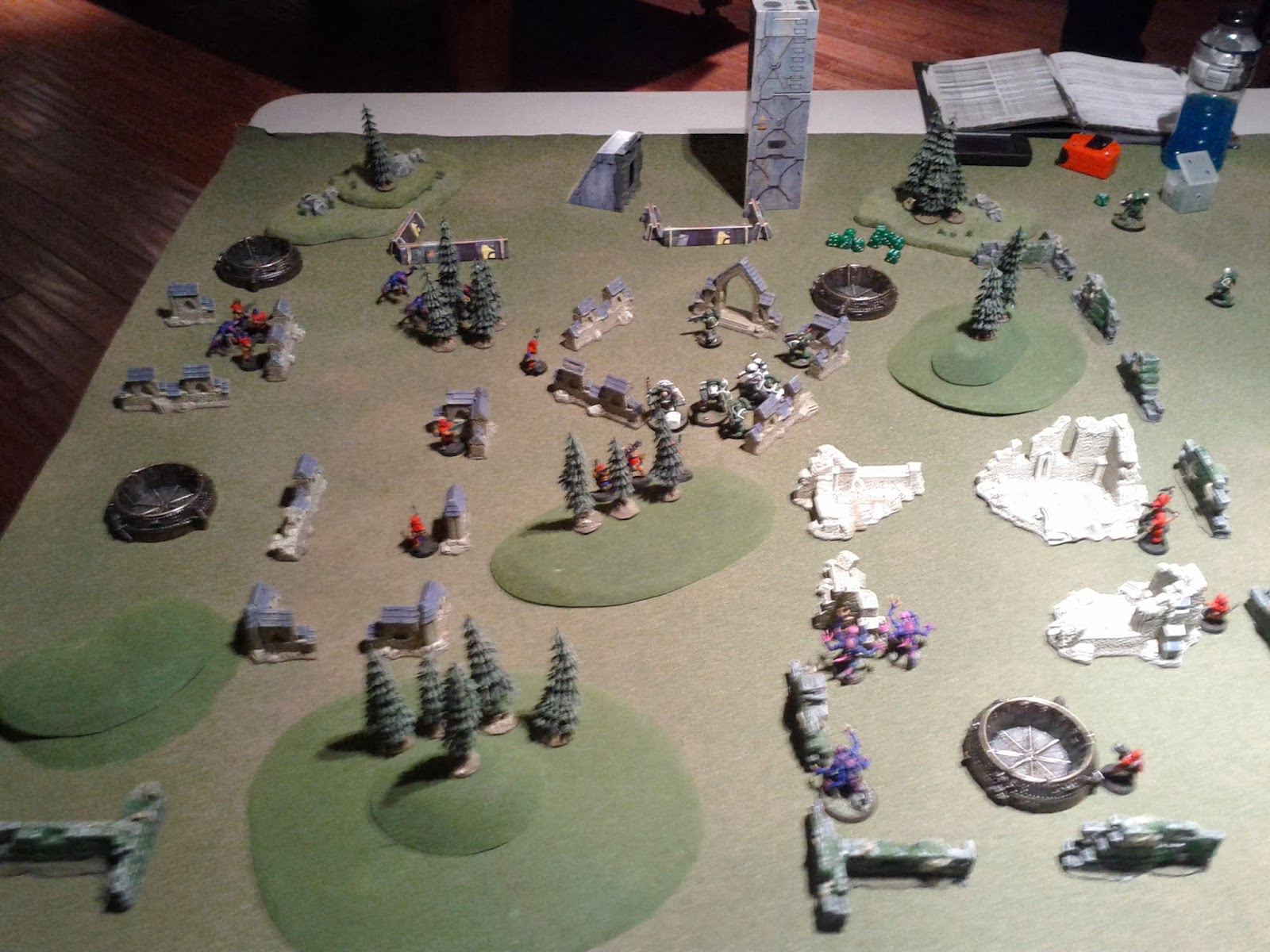 Turn 3. The marines move up to the far edge of the ruins. The cultists in the centre burst through the trees to drop two flamer templates and a couple of shots on the clustered marines. Only one marine succumbs, but amusingly a few are set on fire.....including their leader in terminator armor. Note to leaders, close up that faceplate/helmet before the fire fight starts! 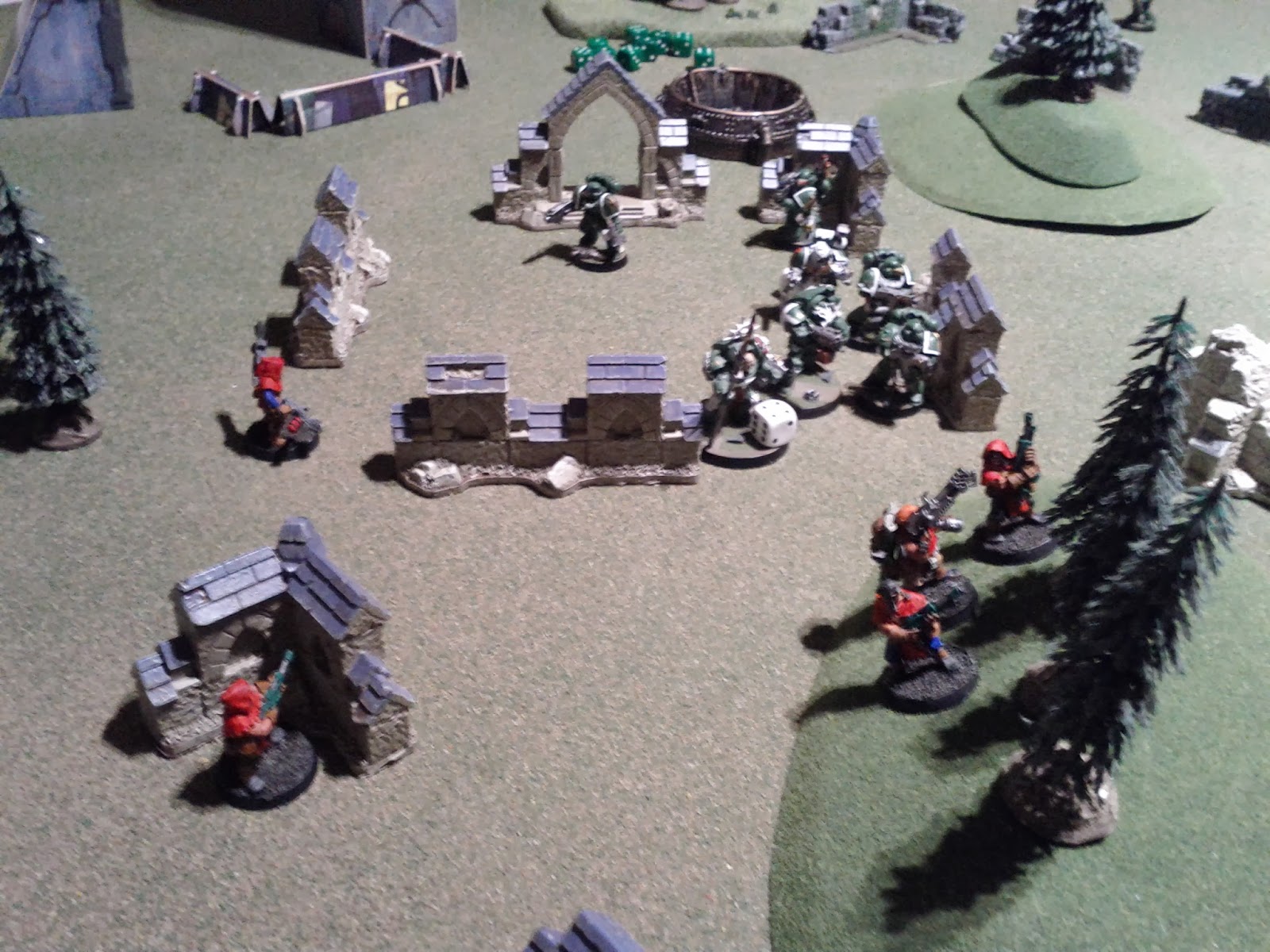 Another angle on the flamer rush by the cultists. They truly are dead men standing out in the open like that, but they will attract vengeance/gunfire for at least a turn while the real threat continues their advance. To the Right we see the marines continued to move forward and smashed the cultists (except for the super lucky fellow on the hill). In return the first wave of stealers rush forward eating a few terminators.

The leader has survived (and still on fire!). Wave 2 of stealers can be seen on the left of the ruins about to hop the walls and charge in. The stealers (except for the aged and stiff patriarch) can freely move over terrain without being slowed down. They also have a better save when terrain obscures them. This was pretty key. 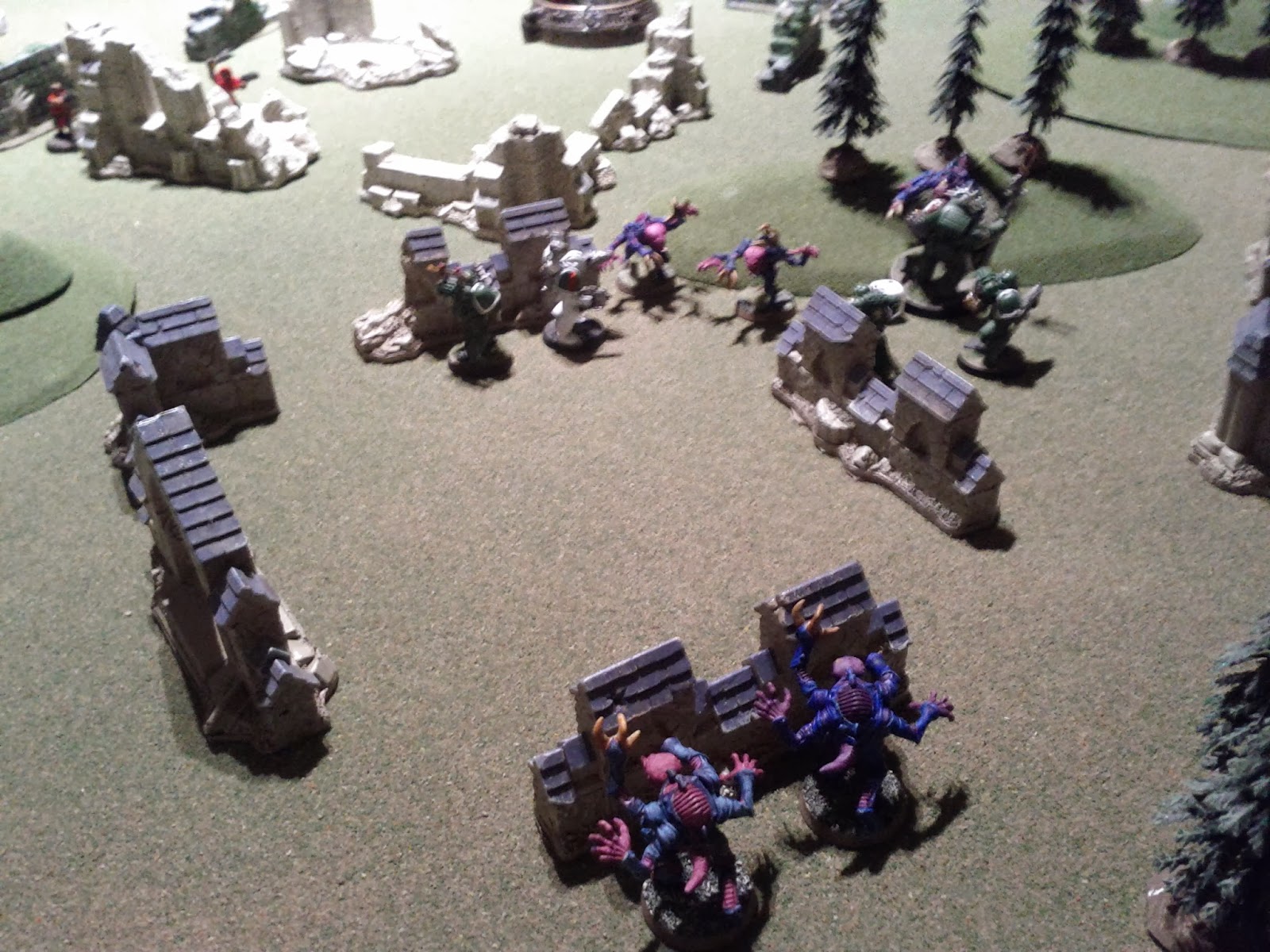 The end is nigh as the stealers swarm small groups of marines, largely paired up to avoid the risk of overwatch fire. In the new rules, models pop off a final shot against chargers, hitting on a 6. This definitely seems like something lifted from flames of war, but it is definitely a wise thing to add. It makes it more dicey to be close combat oriented, and (apparently) there has been a real shift towards gunfire, and highly dedicated assault units (rather than everyone charging in).

Kudos to my opponent Kevin, who had good grace during game play with horrible dice luck. A pleasurable game to end the year with. 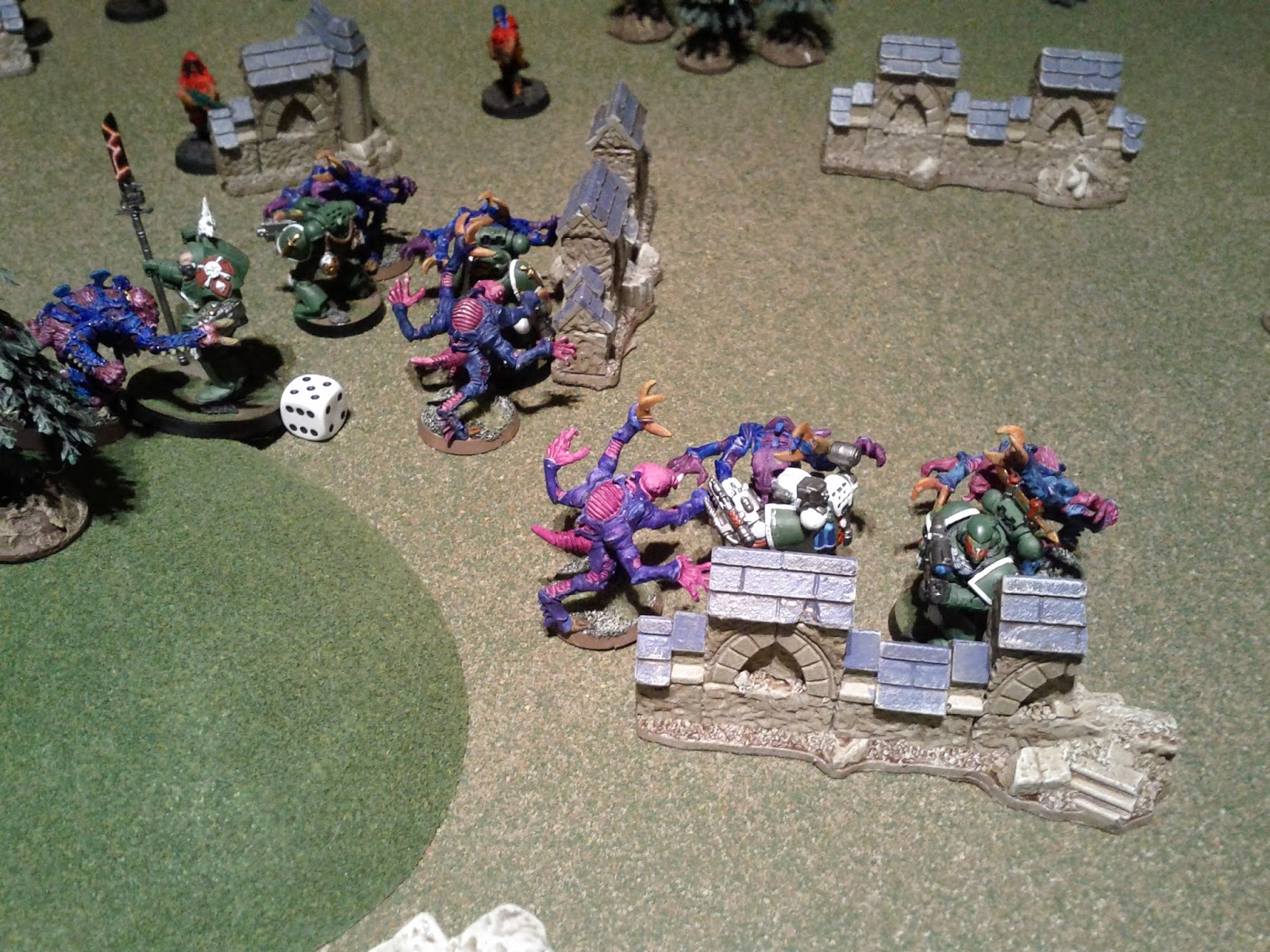 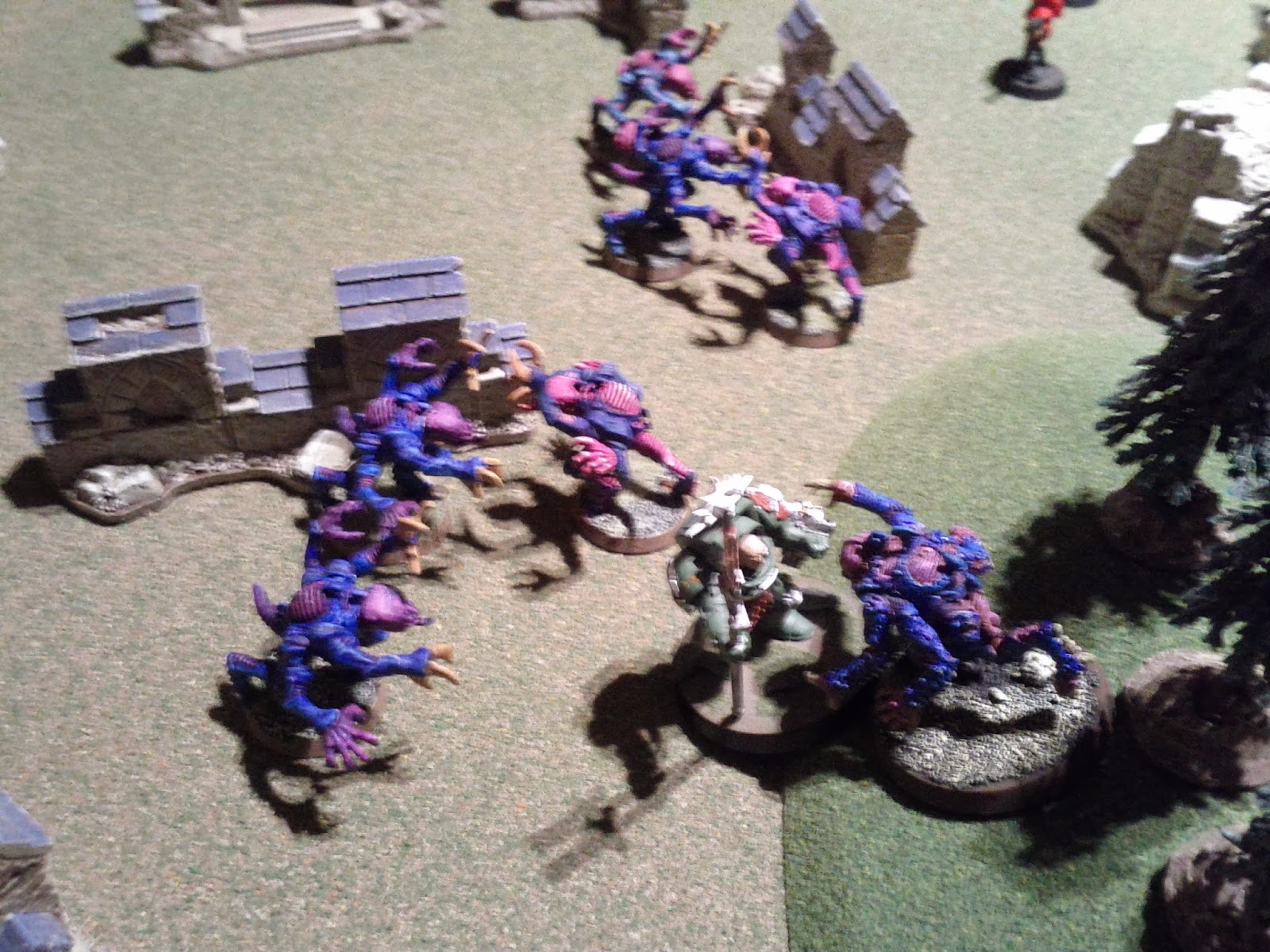 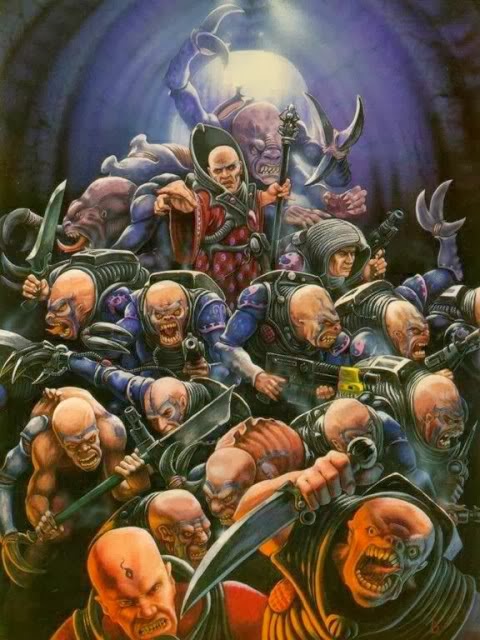 I went to highschool in a small town of 15,000 about an hour out of the city I live in now. While the town has changed a lot and many people have moved out, a number of us occasionally take a trip up the windy highway for some gaming and hanging out with high school friends. One friend was out from the East coast (handily avoiding the worst of the power outages) after about 3 years of absence.

I managed to squeeze in 2 games of (heralds of Ruin) killteam. A en-small-ized version of 40k.  In many sense it reminds me of necromunda, a game that I had tons of fun with for many years. The focus is narrowed down to individuals, rather than squads, and true line of sight determines what you can shoot at. The over the top units and models are largely thinned out of the game allowing for some interesting narrative to come out purely based on mooks lucky antics. 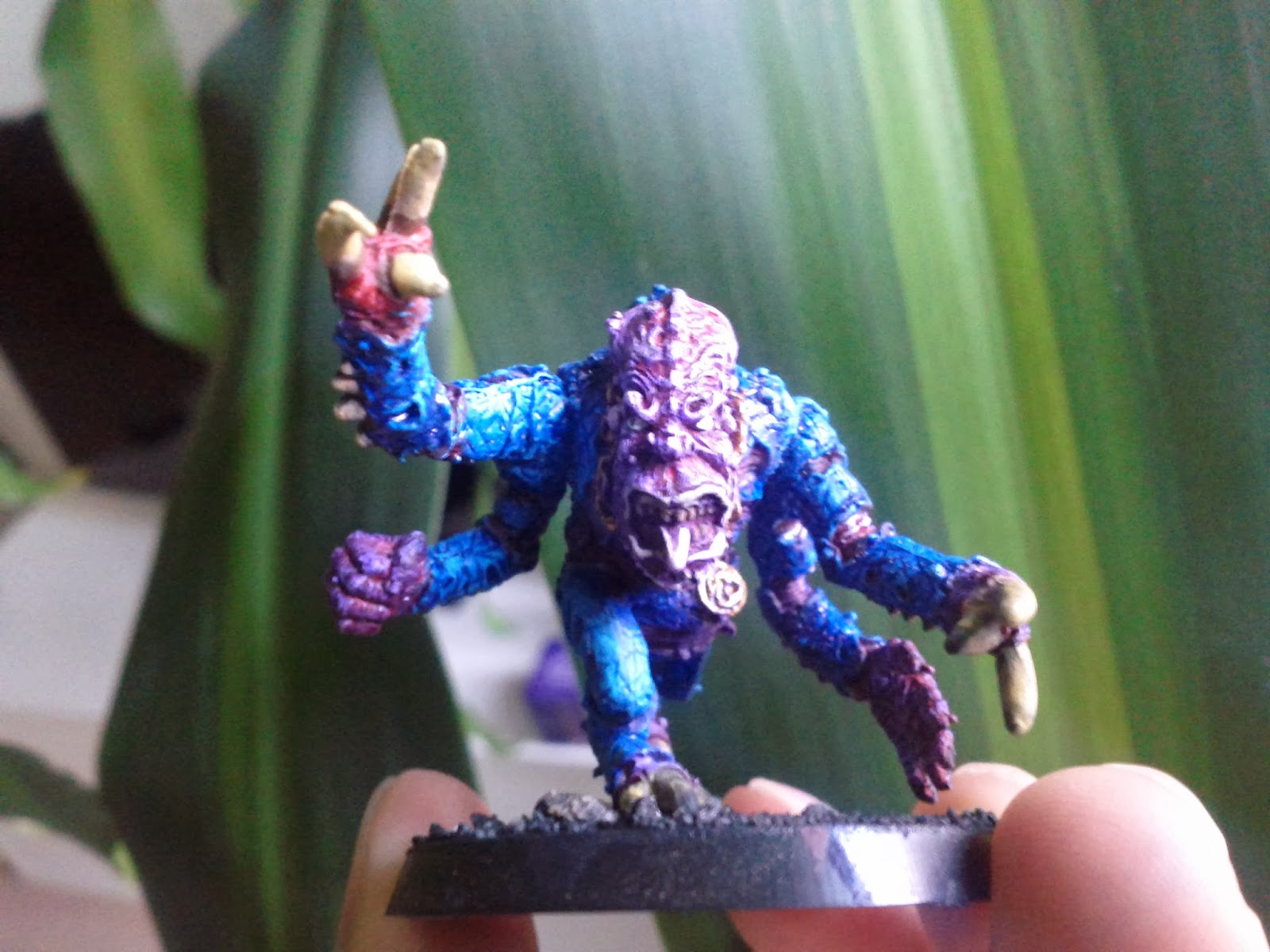 Speaking of Necromunda, I ended up pulling together a genestealer cult force, using my cawdor models as the rank and file cultists, and some original space hulk genestealers.  My only lack was the leader.....it would appear that I have sold off the old magnus model I had, but I did manage to hold onto a patriarch. I managed to bash out the painting in an evening.....it helped that I had a color scheme already and was painting to match my other stealers. I have to say I was totally chuffed to be fielding a fully painted force. It also helped starting play knowing that my army sucked and was unlikely to win.....any win is pure victory! Given the limitations of my models available, and general ideas of fluff for the cult, I ended up fielding the maximum number of genestealers (6), and three 5-man 'squads' of cultists. This ended up being a fairly high model count for this game, but of course my guys where total mooks and went down hard to anything stronger than a just of wind. The major saving grace is the ability to 'hide' in this system; by forgoing shooting you can't be targeted by your enemies unless they close to within 6 (or 9?) inches. 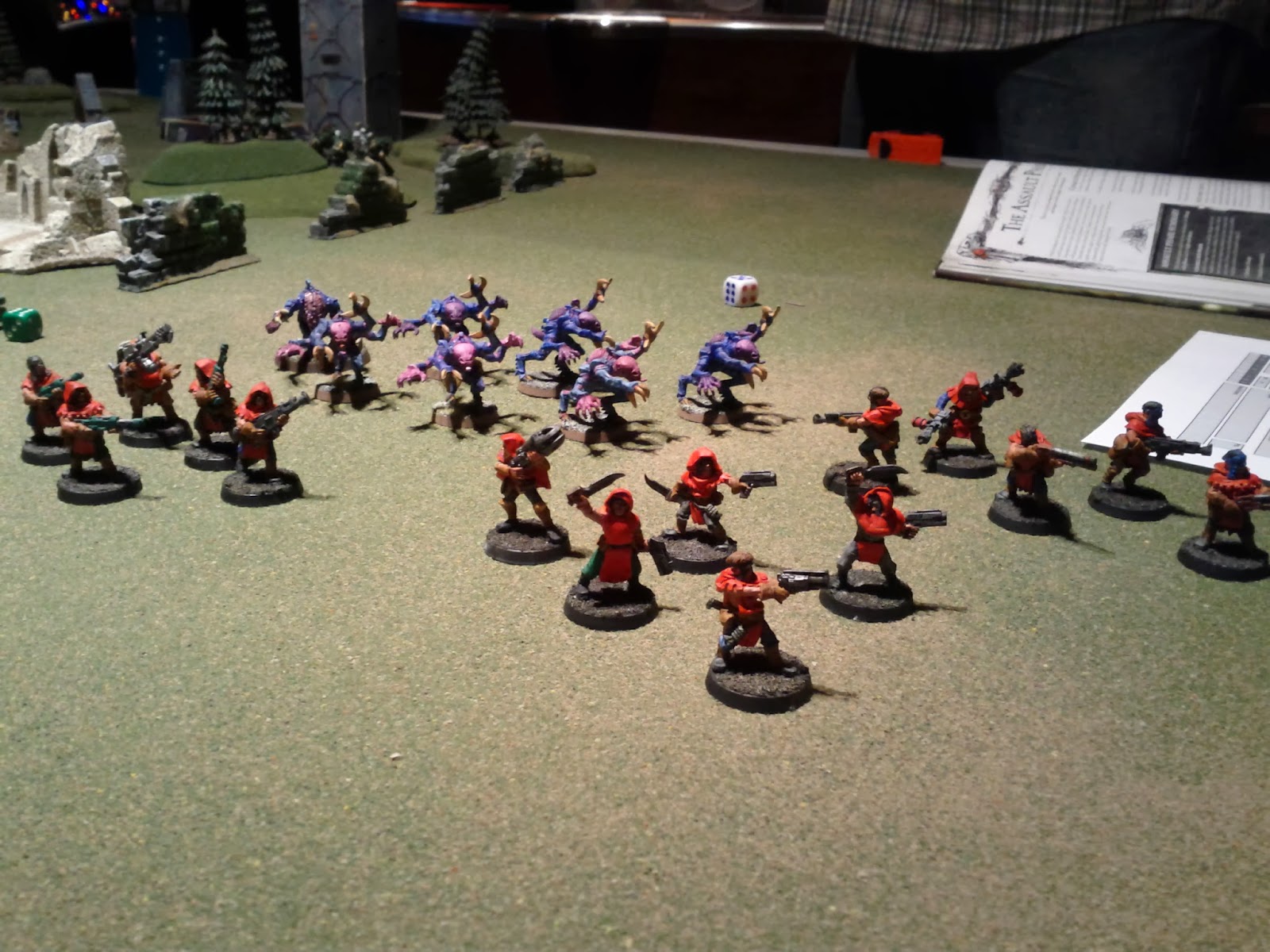 The crimson zealots where my original necromunda gang. They are classic cawdor models, filled out with some old confrontation (The GW, not french version), and frateris militia (1st ed sisters of battle) converted with green stuff. 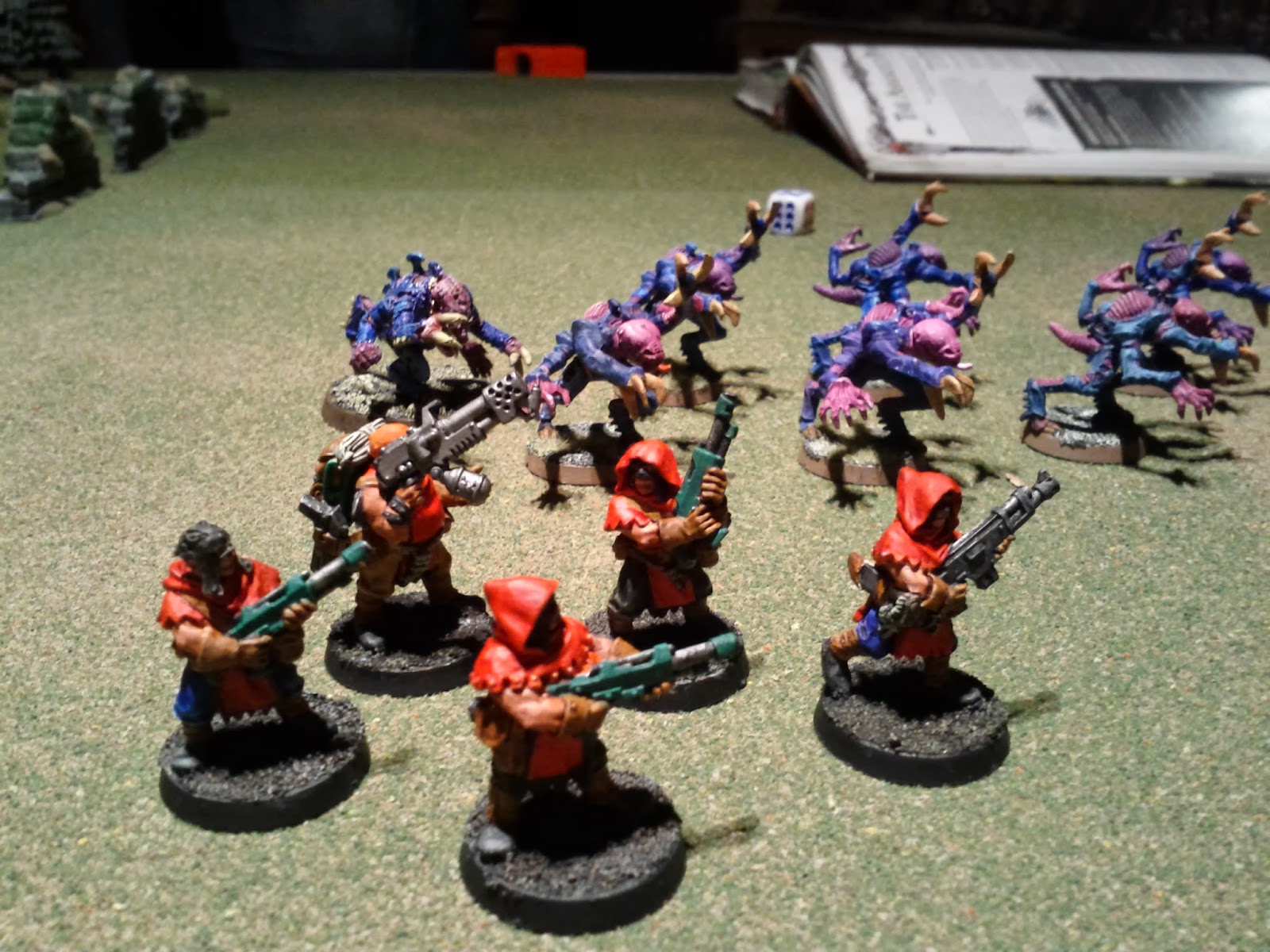 2 of the squads were armed with lasguns, autoguns, shotguns and a flamer each (read: crap, crap, so so and decent). 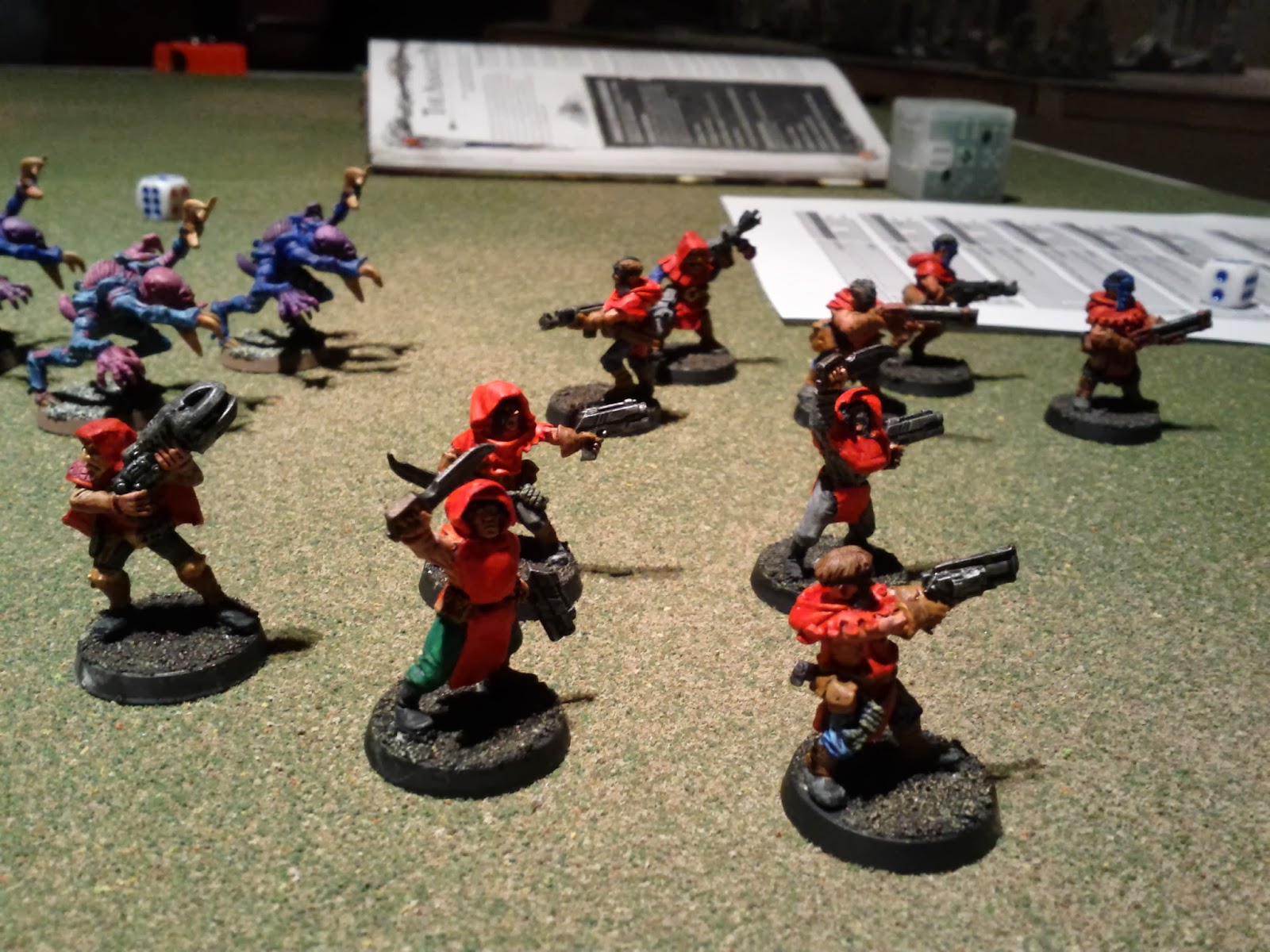 The last squad was my 'crack' suicide squad (think monty python 'Life of Bryan), and they were armed with an armor cracking grenade (of course I thought that they were armed with lots of grenades.....not just one), and one plasma gun. Obviously a coveted relic, as it's the only weapon that can defeat the prevalent power armour saves I expected to encounter.

Next up, we'll see how my xenos loving scum fare against the defenders of humanity.
Posted by daveb at 8:07 PM 2 comments: