My enfilade gaming was cut short by a vicious bit of sickness. I suddenly felt like I'd been hit by a truck, archy, feverish, sore throat. I ended up skipping the evening session and fell asleep till the am (with a brief sortie to retrieve my figs from the convention). The illness made the trip back north with the family pretty delightful too. It's not a vacation if you don't get sick at some point I suppose... 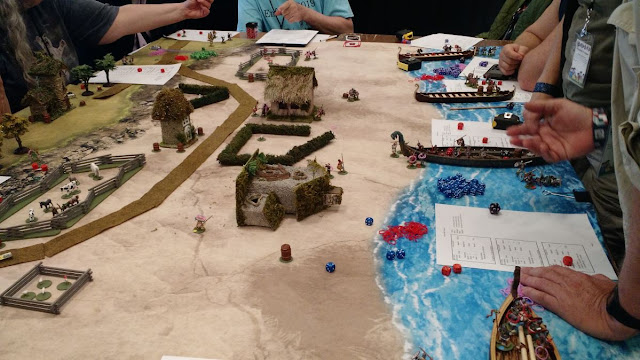 Picture dump after the jump....

Email ThisBlogThis!Share to TwitterShare to FacebookShare to Pinterest
Labels: 2019, Enfilade 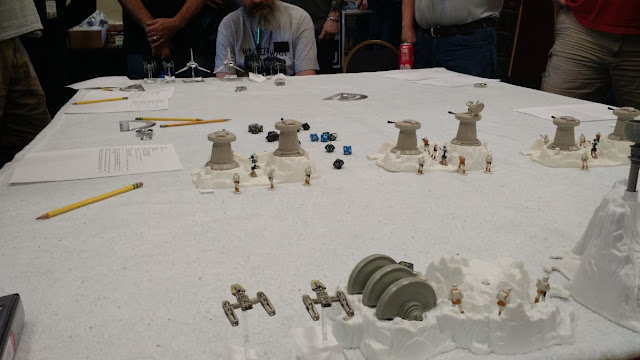 Saturday afternoon (second block) I joined in with the Battle of Hoth (how it should have been). This was an "air combat" game using airwar C21. I see this ruleset come up for conventions fairly frequently but I have never played. It seems fairly quick to play, easy to pick up, but I can't comment on how 'realistic' it is.

I was on the rebel side attempting to guard the ion cannon and powerplant for long enough for the transports to get away. Our assets included a line of turrets (fairly short range and poor accuracy), some ground troops (to get shot at by storm troopers), 4 y wings, and maybe 6-8 xwings. By the strange randomness of conventions one fellow (Victor maybe?) and myself ended up with our 2 y wings on the left flank flying directly at the imperials, while the balance of the rebels swing across the table diagonally from the right, creating a bit of a flanking furball when they arrived.

The imperials needed to blow up the power plant and ion cannon OR capture the base with their storm troopers. They had a fairly huge host of empire bombers (4-6?), 2 tyderian shuttles with storm trooper squads, and a few tie fighter escorts (4+).

The GM had done a good job setting us up with cheat sheets and tracking records. The rules seem pretty easy. Unfortunately with the noise, a bit of ambiguity of the cheat sheets, and a pretty light touch on explaining rules up front there was some confusion about how shooting worked. This didn't end up mattering too much before we figured it out, but it did affect how the rebels used their missiles. 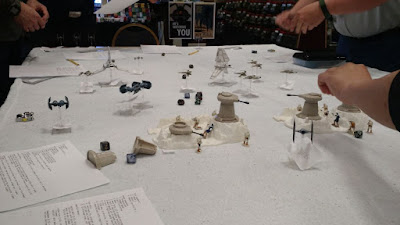 Turns out that gunfire does 1 points of damage per hit, whereas a missile hit does 1d10. The Y wing pilots all largely ended up cooking off their missiles ASAP believing they were in flying coffins and it was better to have used them then not. The GM kept shaking his head about why we'd use them on lower value targets like the escorts. We were thinking "my guns do 2d10 damage, why wouldn't I use the weaker missiles".....ooops.

I feel quite bad for one of the empire flyers who was flying a couple of the tie fighters who was tabled *very quickly* as 'missiles away!' and the thought that we'd be better off chewing up the bombers once the screen was gone. He walked away obviously irritated and I can't blame him at all.
As we figured out how guns actually worked we discovered our turrets were barely a speed bump and the tie bombers (with a ton of missiles that only attacked ground targets) were destroying them left and right. 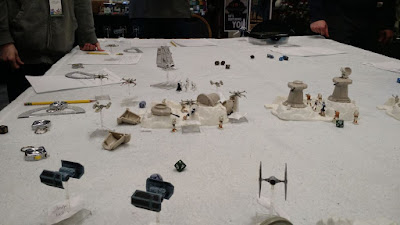 The rebels managed to down a shuttle, forced the other to drop their stormtroopers early, and cut the empire bombers down to 2. Alas two bombers with bays full of 10 missiles each did short work on our infrastructure. *BOOM*

Interestingly the GM noted this was the first time the imperials actually won. The big difference being they usually spread their forces across the table or on two corners. This time they were concentrated on one flank (far from our own heavy flank), and we simply couldn't do enough damage in time with the target rich environment. Clever play rather than simple luck on this one.

I'd be willing to try airwar C21 again to get a better sense of it. It'd be good to hear from those who play more air games as I've only played CY6 (and Cy6 jet age) and it's definitely a more crunchy realistic system (with the resulting increase in playtime/decrease in flyers required).