March has been a bit of a bust. The COVID disaster has complicated our lives but both my wife and I work at the hospital so aren't working any less. My mother in law is now living with us as we expected our childcare situation to complicate if not disappear (though not, thankfully, yet). Mentally I'm a bit zapped so have found it pretty hard to pull myself away from easily accessible entertainment on the computer to actually start painting. Boo. 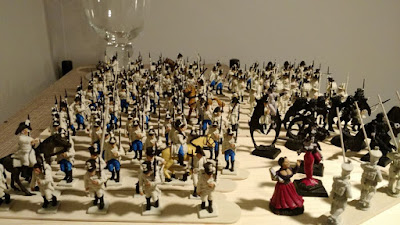 Let's look at what has been done. The Austrian infantry made some progress with all the black work finally done. Although, what's that in the bottom right? It's some standard  bearers that just arrived with the artillery..... 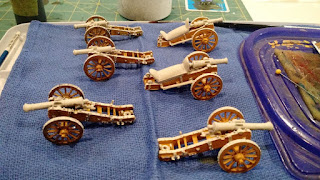 We have a critical shortage of guns for our game. I ordered a lot from frontrank when funds freed up to match the infantry I'd slowly stockpiled. 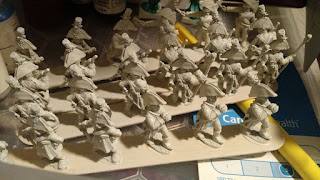 I'm a bit (or more than a bit) dubious the convention will go ahead. I need to plan to not screwing up the crew though, so I'm going to still try and get the painting done. Worst case is I do the minimal cannons and a few infantry. I can even imagine a situation where I don't go and hand off the figs to our mastermind (Doug) to haul down there.

The guns are inked on the left but not on the right. I tried using 'payne's grey' ink which was a bit dark, and some of Les' magic ink 'SOFT' that I made up from a recipe on dakka dakka...looks better.