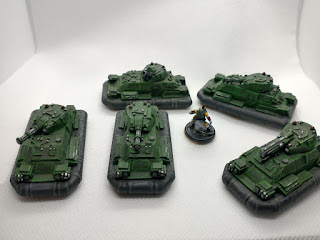 More minis that have sat unpainted for far too long. These lovely hovercraft are from 15mm.uk, originally part of the ion age line I believe. There are version with wheels and tracks as well instead of the skirts.

Prior to moving from Vancouver I had these partially painted. I got hung up on what to use to highlight, I tried some nearly fluorescent green and it didn't look right. So it sat.....and sat. 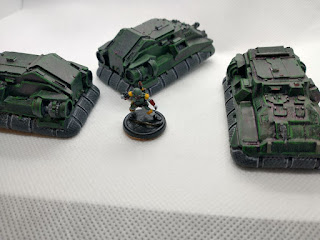 Eventually the grey adder was released, a APC variant (rather than IFV I guess). I grabbed a set and decided to finish these bastards.

Naturally the difficulty with any tank, and especially green ones, is to try and make it not look like a blob of colour. I'm not sure that it's as non blobby as I'd like, but it's done. And that's a win. 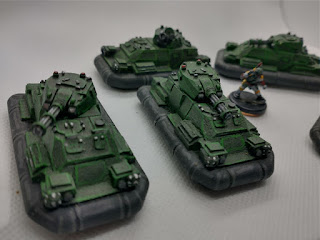 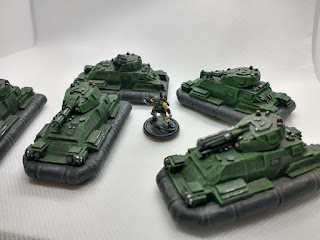 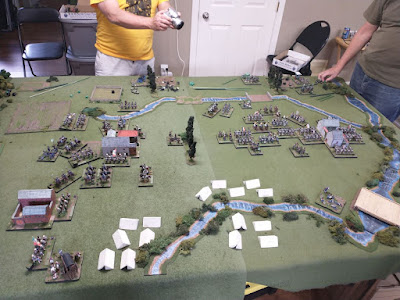 The battle for Zeitlessheim (Bleinheim in disguise) has reached a climax. Across the entire front both sides commands are making morale checks to remain in action. Already numerous 'hold' results have stymied assault plans, and even some 'fallbacks' have complicated matters on both side.

To the Left the Prussians have depleted the Italians who are left covering in the villages and staging a flagging attempt to stop the lancers from seizing their supply line of communication (bottom left near the tents).

In the centre the French and Italians massive struggle to break the British has been delayed when the British, fortuitously in this case, suffer a withdrawal result and recoil. The extra space relieves the pressure while the British allies attempt to crack the Franco-Italian wings.

Top Right the Saxons pulled pressure off the British for much of the day as a force in being. Finally their counter attack has pushed the French to the edge....at the cost of the same for the Saxons. With all armies exhausted there's more space for the few effective formations to move about and try and create rational lines. 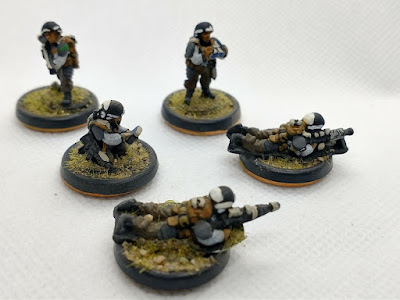 I've had a slow burn (VERY SLOW) project to get some 15mm figs on the table for star wars action. These folks are meant to be rebel naval troops.....the poor shmucks who get dismantled in the 1st movie ever produced. 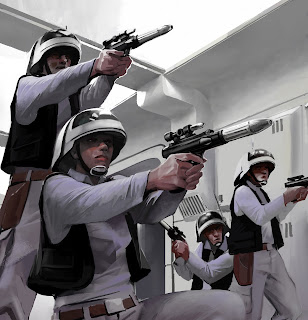 They are a bit....under geared in the movie. I imagine that they are acting as a diplomatic honor guard more so than doing a hard assault. Naval troops I imagine are both for ship board security (and while at dock/port), but also form scratch forces of infantry when the full army (such that it is for the rebels) isn't nearby. Perfect setting for small scale gaming.

Yikes, how overdue is this? I'll tell you.....I started the draft in early September.

How is my recollection? Not good enough.

Centre field (and right flank) we have the French under the command of Seth facing off against the Saxons (upper right corner) and the Brits (centre upper). The Franco-Italian brain trust decided to try and crush the British and force a withdrawal before we were driven from our victory sites (the various towns).

Seth chose to hold the town on his right flank heavily, which sufficiently deterred the Saxon command that they did very little for most of the game. It later came out that Peter (commander of the Saxons) felt the town fight was a pointless meatgrinder and merely screened it. This would cause challenges for the French to persecute an attack with a strong fresh flanking force hovering menacingly. 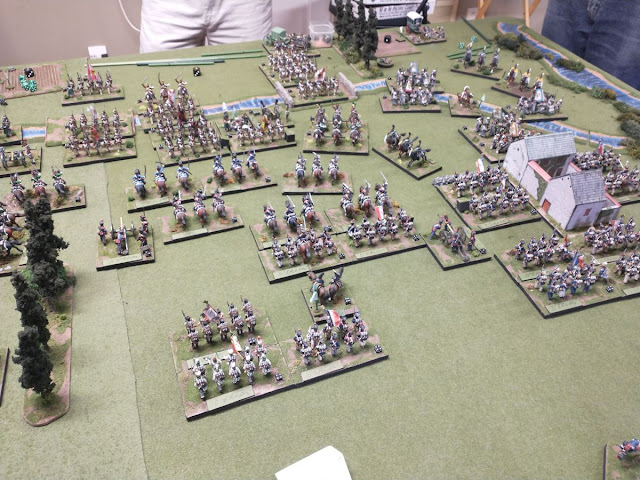 Happy New Year! To be honest it's a bit of a relief that 2022 has ended. Certainly a challenging year for many.

My productivity nose dived in the early fall (I'm astounded to discover I hadn't pulled pictures off my phone since mid August). I think there was a combo of working more than full time for a number of months, typical summer craziness with young children and then the start of kindergarten and the inevitable waves of plague that followed.

I do have painted minis to show, and some game reports even (!), but those will have to follow in the near future. This is the New Years post. So, how did my resolutions go? Fortunately I had two (2) and they weren't ambitious!

Frostgrave received a bump as my buddy Garret started egging me on with texts showing his progress to being ready to play a game. We did, in fact, play 2 games in 2022!

Prior to writing this post I thought I did far less well than I actually did. Hunting through the pictures from last new year post I made a sizeable dent in shameful tray items. It's possible there's a whole tray worth of stuff!

I'll do a proper pictorial visit to this stuff later, but here's a quite glimpse at (the majority) of the painting progress this year. 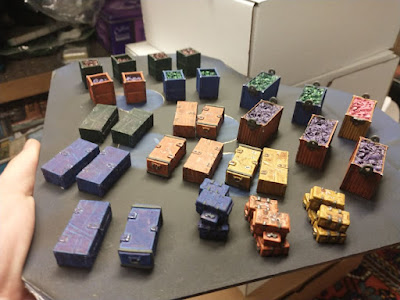 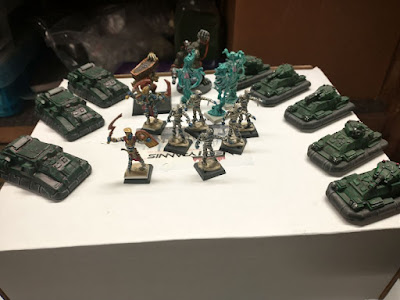 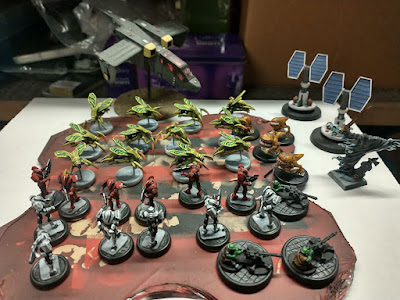 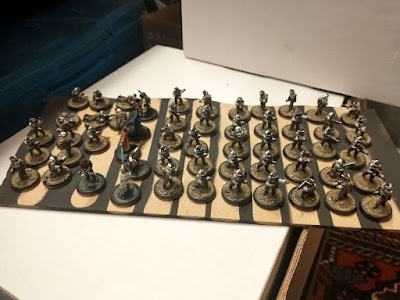 With regards to the coming year I don't have solid plans. I'd like to introduce some more regularity into my life....so I'm pondering how to balance work, family, and hobbying. It'd be nice to have a solid target for frequency of blogging, gaming, and painting.....however "frequent" that ends up being. It's much easier to work towards targets than nebulous hand wavey things.

Email ThisBlogThis!Share to TwitterShare to FacebookShare to Pinterest
Labels: 2022, 2023, resolutions, Trays of Shame 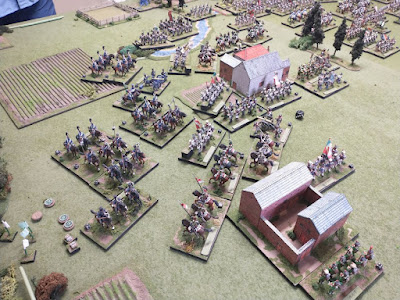 On the Franco-Bavarian left flank the Prussians had finally finished eating up the space from the refused flank. Whilst the French were focussing on breaking the British in the centre it would remain a question could the Bavarians hold the line against the Prussians now in firm contact with them. 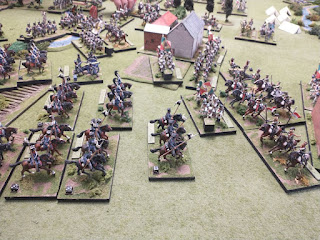 Contact was initiated with the lancers duelling it out in front of infantry in square (technically in front because all sides of a square are the front, right? right?!). 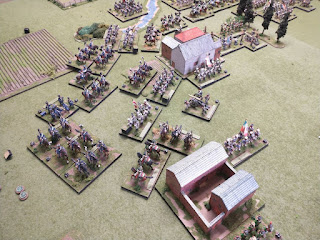 Another cavalry unit was dutifully fed into the grinder by the Bavarians, wiggling through the narrow gap between the village and the squared infantry.

Meanwhile near the creek the Prussians were screening the Bavarian infantry square. This allowed them to advance cavalry to face the thin Bavarian cavalry screen that had the Prussian foot stuck on the banks of the creek. Shortly all hell would break out for the clueless Bavarian commander whose mental focus was elsewhere. 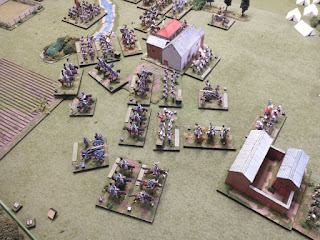 Steady progress by the Prussians depletes another unit of Bavarian cavalry. The Bavarian commander (me!) was starting to feel exceedingly uncomfortable about the risks developing to my line of communications.

In the centre the British were starting to make morale checks but were passing them with solid die rolls. The Bavarian morale was starting to get a touch brittle so I could no longer recklessly feed troops to delay the Prussians.

Looking closely at the troops near the stream you can see (I think I missed seeing it at the time) that the Prussians have set up a long cavalry move to 'close the door' (i.e. flank) my defending cavalry. Not that I had much option, no space backward, infantry in square to the front, and infantry across the stream just waiting to advance given the opportunity. 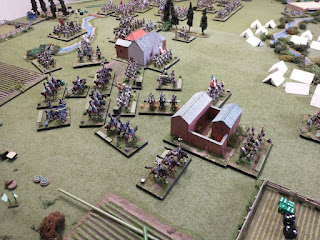 The door closes and, astonishingly, infantry move across the creek and into contact with the depleted cavalry. Another Bavarian unit disappears and now morale checks now have the possibility of the entire command shattering and leaving.

Furthermore there is nothing between the Prussian cavalry and the line of communication marker (the infantry base to the right of the picture is actually inside the town as a garrison unit....which means it's time consuming and disruptive to redeploy out of the time....and represents a bunch of lost victory points if I depart). 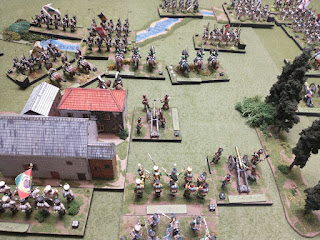 Another quick look at what happened here.

The line of cavalry screening the towns and batteries. These batteries have been hammering the Brits all game long to assist the French assautl and try and break the centre. 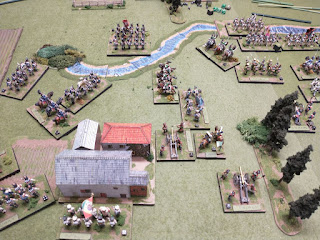 Post door closing. The town is now screened by the very last infantry reserve and a mostly destroyed cavalry unit. Finally the Prussians are in a position to start a town assault if desired. 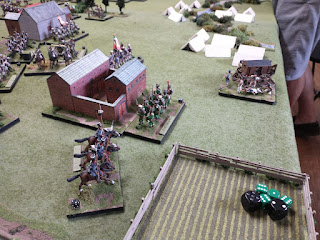 On the extreme flank the Prussian lights charge foward towards the LOC (in the ambulance wagon near the tents). There is a single unit of infantry behind the town and a depleted cavalry unit (light against the Prussian heavy) which are available to "stop" the advance.

The Prussians have superiority in all locations. The Bavarian morale is brittle. The Bavarians still have a mild edge in cannons and the Prussians aren't without some morale stresses of their own.

The battle is winding down with all formations having the possibility of a catastrophic loss of espirit. 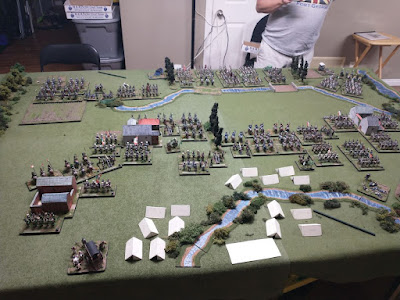 The main event for Dougfest was a 5 player game. Usually Doug makes us try and puzzle out the battle later but he gave us enough hints to guess on the Friday night: Blenheim.

Historically the British under the future) Duke of Marlborough  did a fantastically long march across Europe to aid his allies vs the French and Bavarians. Logistics being what they were (weren't really) it was an amazing accomplishment and achieved with no small amount of tactical surprise.

The Bavarians/me will be played by Italians and green clad cavalry (lower left). Seth/French are lower right. Prussians/James (upper left) . Upper Centre are the British/Doug. Upper Right Saxons/Peter. Linear stands of trees help give a clear delineation between commands.