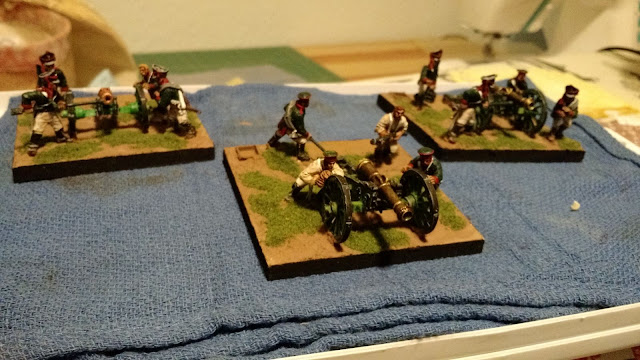 I finally finished a project that had been on pause for numerous weeks. Here we have 3 guns (batteries in Dougs General du Corp rules) of Russian Guns. Only the smallest gun, on the left, is actually Warlord, the other 2 guns I bought from Front Rank as I had other plans for the small 6lbs (4? lbs) guns. It's probably noticeable, as I forgot which greens I used, and the smallest gun is positively fluorescent compared to it's larger brethren. 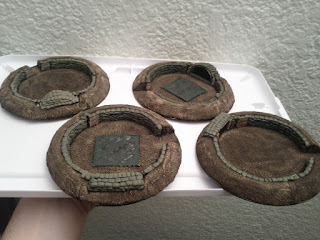 Having earlier completed my trial artillery fire pit (here) I finished painting up the rest of the hydrocal terrain I cast up using Thomas' molds. The hydrocal (tougher plaster essentially) was allowed to dry fully for about a week, and then painted with future floor polish to aid with robustness/anti chipping. I think this will also help avoid the hydocal/plaster from drinking up paint. 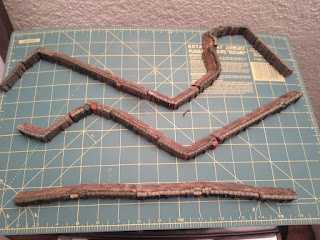 The scale is about 20mm (1/72). I will happily use if for 15mm figs, and I suspect it wouldn't look too far out for 28mm as well (although maybe the artillery pits would fit a heavy weapon rather than a true towed weapon). 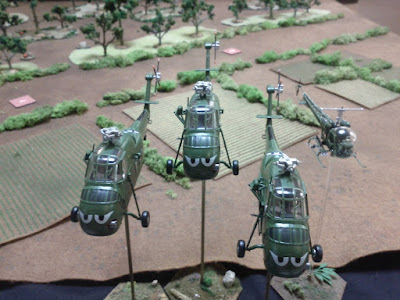 Once again I met up with Thomas (Peabody Here!) to have a game on his exquisite Vietnam setup. He has been working on a reinforced platoon size rule set. Apparently there is a bit of a dearth of 'modern' (i.e. more recent and streamlined ones that recognize people don't have tons of time) rule sets for Vietnam.....particularly at this scale. I'm sure this is a controversial statement for some, but I'll leave it at that.

I've been encouraging Thomas to develop this set and wander further from the original inspirations in order to achieve fun, fast, and smooth game experiences. One of the complaints previously was the resolution of artillery....totally clunky with too many die rolls. This also bled into helicopter (aerial artillery) attacks as well. To be honest, you almost didn't want to use the stuff b/c then you'd have to resolve it (I joke....sorta). It was particularly grating as the basic move, fire, suppression, morale, order rules were pretty tight and played well.

In our last brainstorming session over copious amounts of tea, we made some heavy revisions for the artillery, spotter helicopters and aerial artillery, and 'Hot Lz' VC card/ability. The artillery rules included prep fire.....so we decided to make a 'HOT LZ!' mission to try and test our revisions most efficiently. The FFW plots some prep fire, the VC sets up his blinds, artillery is fired, and the FFW arrive in their choppers. GAME ON! 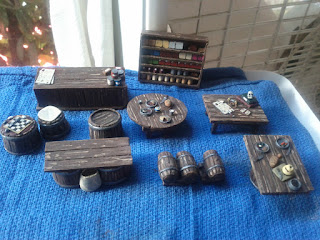 My painting efforts continue to be stymied with weddings and birthdays cropping up in the late summer. I did, however, manage to finish off some bits I've been picking away at for a couple of weeks.

Up this week are tables, kegs, chairs, and part of a store set from Ainsty. Ainsty has some very cool ranges, all in resin, and are located in the UK. Naturally this means fairly steep shipping for those of us in North America (to be honest, it's getting crushing from everywhere to anywhere it seems).

I'm reasonably happy with this fig, it's a bad picture of the eyes, it looks better in real life. This is first for negro skin tones, and I thought they turned out well (check out those abs!). Yellow is pretty challenging for me as well (not sure if it's hard in general, or the paints I use), but this turned out passable.

The base is a bit weak, and his afro isn't amazing. Hard to know what to do with black hair and not a lot of texture. There is a very light amount of highlighting, but too much grey will (and does) make it look odd. Suggestions for this type of challenge gratefully accepted.