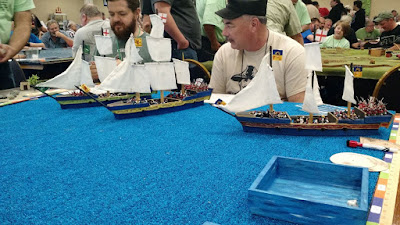 Saturday night I played in a pirate game using the newish rules: Blood & Plunder. I've been hunting for a pirate rule set I like so I make an effort to try out new rules when I can. 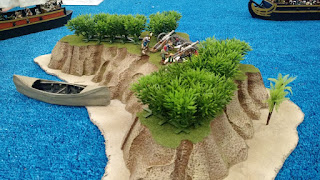 The setup is that 3 pirate hunters have located the pirates safe cove and are coming in to burn em out. The pirates must resist. The pirates are outmatched on all 3 ships, but have a gun emplacement on a small island and, unknown to the hunters at the beginning, also have a few canoes with extra pirates who can row out and board. 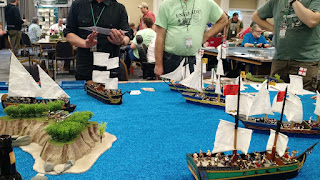 The game was run by a great guy and his son from the Seattle area. Some liberties had been taken with the rules to try and make them play faster (notably all the ships on a side took an activation per card, rather than having everyone wait while each player did his thing). 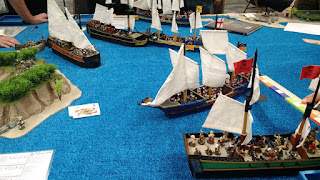 Mark cleverly had a bunch of wood rulers with the range modifiers painted on in colour bands so it was trivial to figure out modifiers....slick move there. 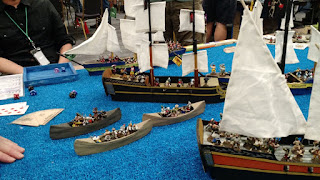 You can see this in the right.


Early game one of the hunters took a mobility hit (spar and rigging damage) and was shortly thereafter boarded by it's opponent. The canoes, scenting blood, rowed in, using the pirate ship as cover from the hunter at the top of the pic (blue with green racing stripe). Hilariously, everyone started to board that melee. The blue/green hunter boarded the back of the black pirate ship, and the red lined pirate ship moved in to join as well.

Meanwhile my own pirate crew was getting methodically murdered by crack musketeers in the third pirate hunter. It was a combo of being outclassed, not having a great plan, and my opponent having above average rolls. Overall it was clear the hunters were going to get a solid win in this game.

Rules wise, I don't think this is the ruleset for me. It has some interesting features around playing cards to select who activates, and the 'later' the card the more actions you get that activation. There were a variety of special skills, and rules to hit, to save, and a multi step morale status (with decreasing activations, then pinned/shaken, the routing).

I didn't really like that you need relatively large numbers of figs (units are typically 6, and you'd probably have at least 3 units per side. I'm looking for more like a dozen tops). The activation, while interesting, could be streamlined. I'm not sure I care enough about extra actions for the late cards for the extra time/thought to deal with this aspect. Cannon reloading is painfully slow. Ships seem pretty resilient and crew saves seemed to be in the 50% range. Arguably convention games never play fast, but I can't see this rule set playing as fast as I'd like, given the difficulty in carving out game time in my life these days. 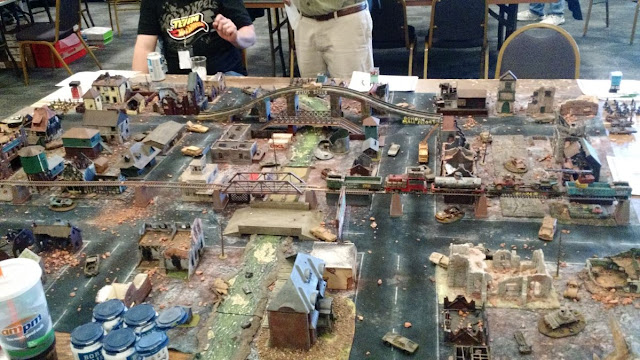 I honestly can't add much to the pictures from this game. Table was rich with character and terrain, yet was still highly playable. This was probably helped by the rules being a bit loosy goosy, but it worked very well this group of gamers. 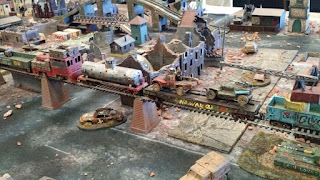 We all had slightly different objectives, all the broken cars could be searched, occupying buildings had a point advantage at the end. Wrecks might be booby trapped or worse (a ufo disgorged a melee monster, and then detonated it's power source later, a few cars exploded, 20ft shipping boxes disgorged zombies). The semi truck was the government who could only attack once fired up. There was a plane bombing (with rockets, bombs, and gas weapons) by request and beer bribery. 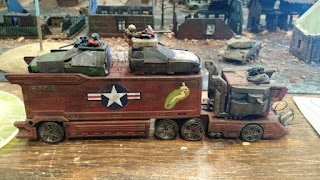 My team was the railroaders who cruised across the board painfully slowly. Our objective was to find a critical item in the railyards. Our first major firefight and the train caught on fire and we lost control....it drifted, burning, till it left the board. The crew all hopped ship(train) at the railyards and gave up their itinerant lifestyle.


More pics after the break....

Looking to fill out my French troops for a Waterloo campaign, I need 3 elements/units/bases of Imperial guard heavy Cavalry. I figured nothing says guard like bearskins, so I selected the Grenadier a cheval (the obvious choice) and the Gendarme D'Elite.

These latter guys sound like pretty tough customers in a non frontline setting. I guess non civil policing can be pretty rough at times. They were fun to paint up (as most perry metals are), but their outfits are so similar I'm sure I'll forget which ones are which. Grenadiers have the yellow trim. 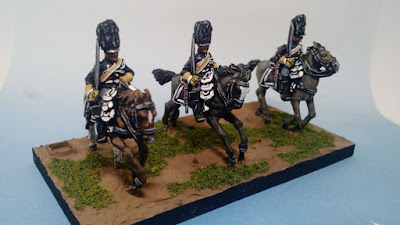 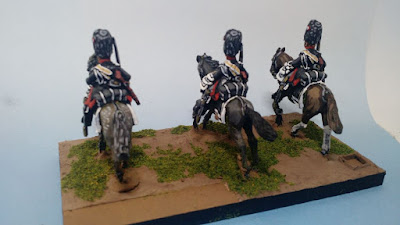 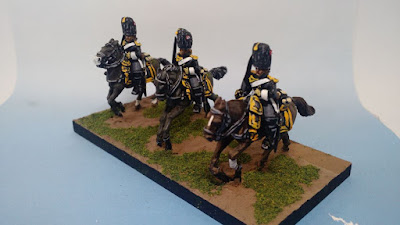 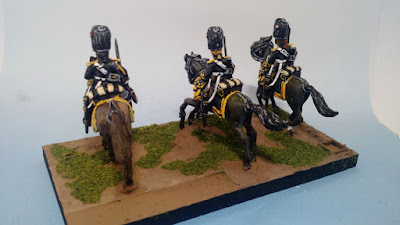 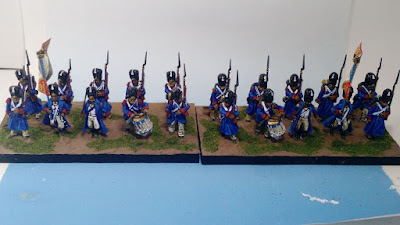 I'm happy to report I'm completely my troops for the convention (almost a whole week before needed!). Doug (dots of paint) is hosting Eylau this year and has once more parceled out commands to encourage us layabouts to paint up troops for his gaming system.

I selected the Imperial guard which required a massive amount of paints (*sarcasm on*).

There was a bit of nervousness about all this as I finally placed my Perry order January 25, and didn't get them till March 14th. I painted my entire order at the same time as I dislike small batch painting. Nine weeks to bang out 9 cavalry, 4 cannon + 16 crew, and 6 command. This is a good clip for me, especially in spring with all the yard and garden work happening. 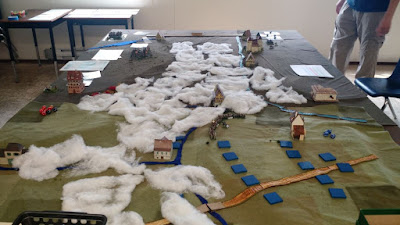 One of the local-ish gamers, Murdock, (*only* 90-120 min away) hosted Austerlitz. We managed to line up a local gaming space and a long weekend were we could get enough people together. This was previously done many years ago, and in fact we used the same set of figs, although I understand that it's a legacy set with the original owner having since passed away. 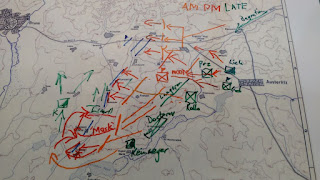 The night before a set of players did some lite role-playing (the briefings are hilariously prejudiced against one another on the same side) and determined the plan of attack. It was largely historical, although the timing of some of the reinforcements changed.