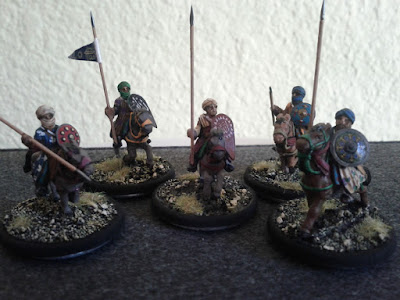 The final installment of my completed Saracen warband. These are legio heroica 15mm figures.

The flags and shields are (most shields) transfers from little big men studios. 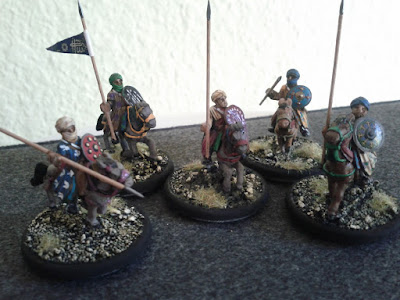 Bases are from Proxie models, with some sand/rock and static grass. There is a metal washer on the bottom to make them stick to my magnetic trays, and give them just a bit of loft to pick up easier. 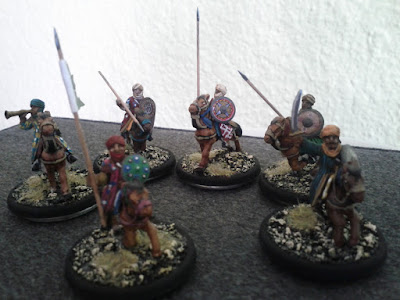 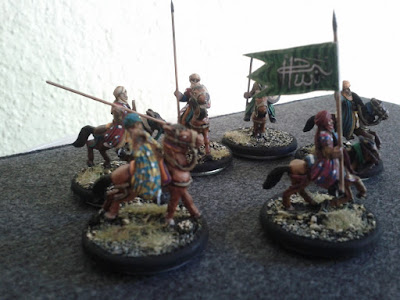 Spears are some steel spears that I negotiated away from Cameron (Cameron's minis) who used them for his Hospitallers. They are much less bendy (i.e not at all), but are wicked sharp and likely to end up embedded in my hand at some point. 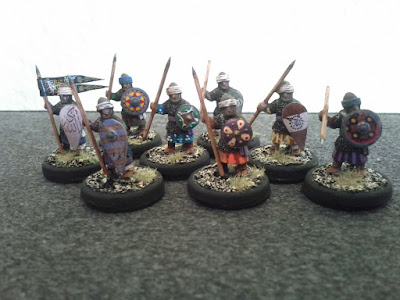 Another swarm of Legio Heroica 15mm Saracens swarm my blog. As noted before, these are part of a warband for Saga Crescent and Cross, to vie in the sands of the near east against the despoiling crusader barbarians of the west.


These fellows to the left are all armoured with chainmail, which suggests they are either more wealthy and/or more accomplished warriors. They will probably be hearthguard (or not levies anyway). 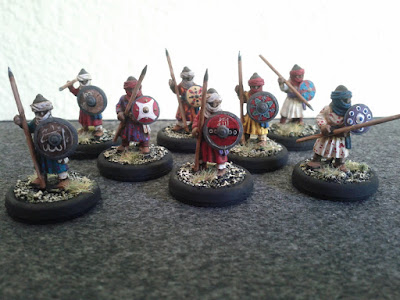 It's probably important to note that most of the shields were "little big men' transfers. Unfortunately, my shield mix used up all the available round ones, and only a few could be trimmed. I was forced to do some painted ones as well, which I'm sure jump out. 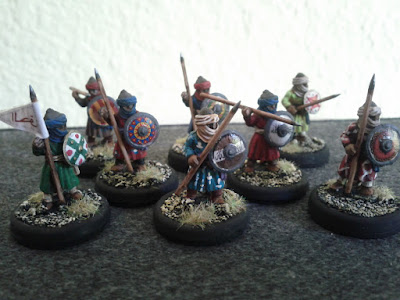 The bevelled plastic bases I quite like, so I'm always happy to pimp the company "proxie models". Reasonably prices and quick service.  I add a metal washer to the bottom (same size as a penny) so they are able to stick to my magnetic storage trays.

The big bonus to these bases IMO is that it's much easier to grab and pick up, reducing the wear on your figs. Also, the spears have weak attachment points, so break fairly easily.
Posted by daveb at 5:00 AM 8 comments: 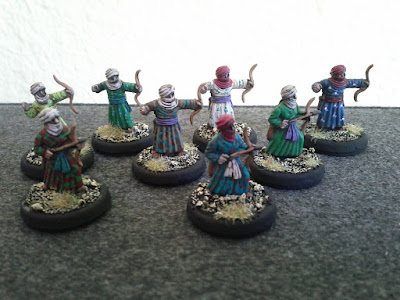 First pictures of a wave of 15mm muslim/saracens from Legio Heroica.


I bought a lot of these guys back in December in order to play the middle east SAGA (Crescent and Cross). While Cameron finished his hospitallers in FEBRUARY, I'm just finishing mine now. Shameful slow on my part. 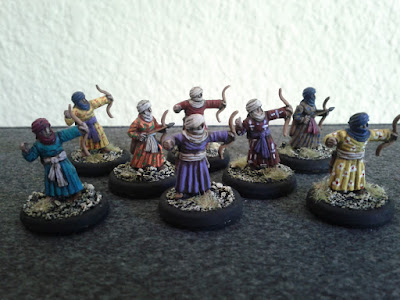 Part of the delay is the multi-hued and patterned clothing....totally adds to painting time. The past week and a half I've been in basing hell, attempting to base up a ton of loose 15mm figs. Most haven't yet gotten the painted rock treatment, and are just sitting on the bevelled raised bases. 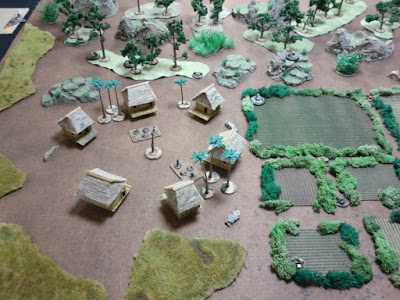 This weekend I had the fortune of once again playing a Vietnam game on Thomas' (peabody) lovely gaming setup. He continues to work on his Vietnam game. I met a new gamer, John, who took the free world forces, while I took on the VC. It was interesting watching John grapple with the exact same issues I had when I played, there is a steep planning curve for the FFW to decide how to break up their units, how to approach the village to Cordon it, where to land, and how radio checks work for the integral air transport and the divisional assets. 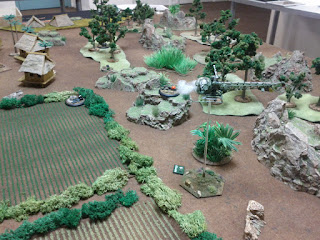 Strangely (or perhaps not) we chose very similar attack plans, with a squad and the company hq walking on, and two helicopter lifts available. John walked his M60 on as well. The pace of play was much slower (I suspect I'm a fast-ish player) as the US has much more assets to work with in this particular scenario.

It was certainly noticeable that this is in alpha. While the movement, actions, shooting, pinning and killing works quite well, the helicopter artillery felt like the flow hit a brick wall. We had some talk at the end of it all. Similarly, the spotting rolls to reveal VC blinds is interesting, but unlimited spotting for everything in sight was a bit too much (especially when the scout copter showed up and initiated about 8 or 10 rolls). It was suggested to bump it down to 1 per unit, or 2 for the scout copter (per turn). 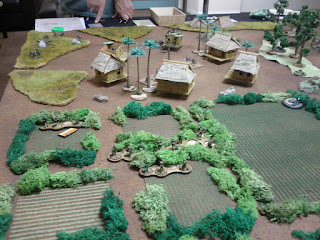 We only finished about 3 turns in our allotted time, so there wasn't much in the way of morale chit pulls. Therefore not much chance for booby traps, airplane strikes, and other items to come up. Due to the scout chopper removing so many blinds early, the VC were really stuck out, with little flexibility on the board. They crashed into the FFW and hugged them, but they were getting greased pretty quickly. It would seem that dividing them up to cells (rather than the full squad and double cell strength I tended to) would have been move valuable. 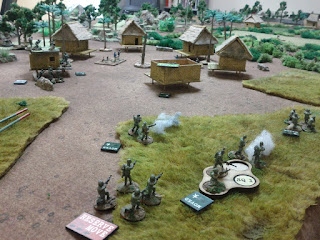 My dice luck was almost completely in the negative, so I was thinking it'd probably be a good time to pull out the troops and give up the objective.

More pictures after the break.

This week has be 'basing hell'. Fairly boring work that doesn't keep my attention, so I wander away from it a lot. I'm holding off on posting pics of some other minis until they are totally done. In the meantime, I've recently finished off a firing position. 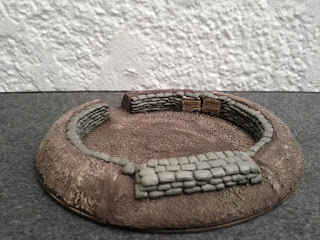 Thomas (Peabody) scratch built an area of fortifications and then (most cleverly!) made molds in poly-urethane. When I went over to cast some rock formations (from woodland scenic molds), we made up a bunch of fortification bits. The painted examples should be landing in the next month or so. He does have intentions of selling some sets, so if you are interested I could pass on his contact info. 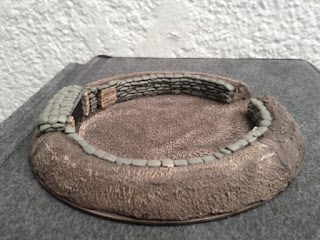 The join between peices looks super rough, but in the next ones I'm working on I've rubbed sand into the milliput filler, so it looks much smoother. 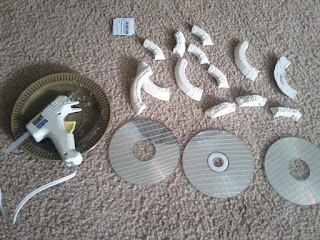 This is what it looks like when you start assembly. 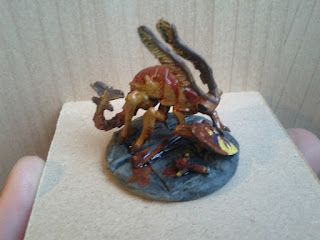 The classic D&D rust monster...but in non-patented form. This was a fun bug that defied finishing for awhile. I wasn't quite sure how to avoid making him super muddy. Not sure that I succeeded, but the milliput base, and some cut up plastic weapons loaded with rust effects help break up the beasts colour, and give a bit of explanation. 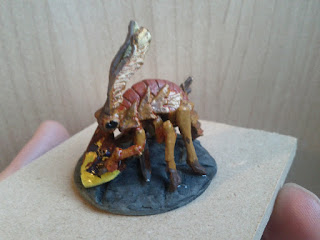 A less good second picture. Obviously not his most photogenic side. 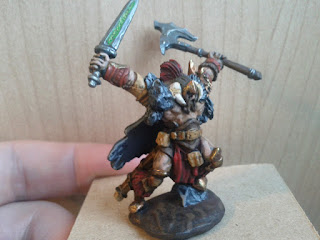 Also finished this week (and again a struggle to complete) was Kord. A barbarian. Ummmm. His axe continually creeps to an annoying bed. I forgot to paint the cord wrapping his scabbard a real colour (instead of overpaint mixed with heavy inking). Otherwise he turned out well enough. Can't say the sculpt really calls to me. 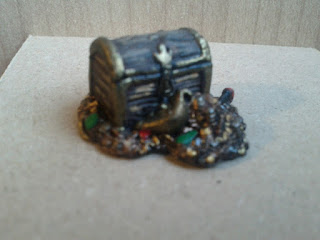 Sometimes you have to ask, what do we fight for? Treasure should be the obvious answer. For those looking deeper, the answer would be a intriguing shaped oil lamp that may grant your deepest desires (like all your minis painted). 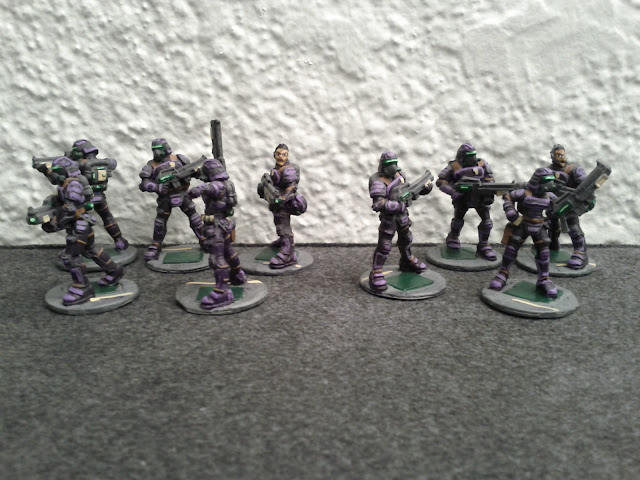 Well.....It wasn't actually done quickly. I've been plunking away at these guys for a few weeks now. I really can't seem to focus work on anything for very long, so I often have endless half finished projects on the go. These guys were in the roster for the Caffeineforge weekly paint up (on hiatus at the moment). 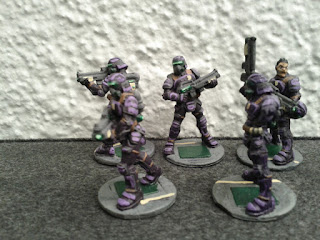 A trial model, the sergeant, was done a few weeks ago, so it was pretty easy to replicate, and bang out, the remaining guys. I botched the bright green a few times until I rediscovered what I'd used. And, typically for bones, the faces of the helmetless mooks are pretty poor castings. These guys were finished much quicker than normal for me (actual elapsed working time), so I'm pretty happy with their passable tabletop standard. Also that's 9 more Bones done, which is a nice bump to my low numbers this year so far. 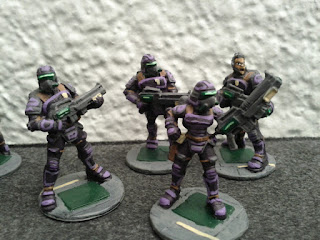 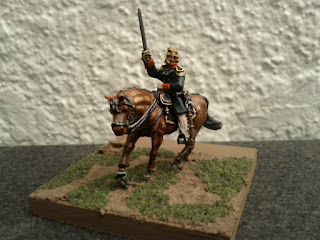 A day behind on my week review. I managed to finish off this fine fellow, to add to my slowly growing Russian force for Doug's convention rule set General du Corp (Dots of Paint).

The generalissimo comes in a set which includes another (foot) officer, and a musician, both of whom were also finished this week. They will remain under wraps until based up appropriately, which means painting more figs, so it may be a while. 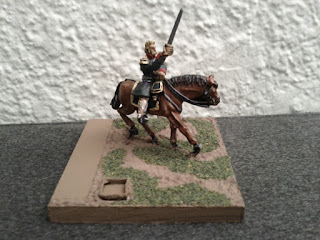 The model was a 3 part casting if I recall correctly. There were 2 or 3 options on the arm (handing off a document being one of them). My biggest (sole?) complaint is the weird horse pose. Look at it. WEIRD. It's like it's scared of it's own image in a mirror and backing away. *Not* a natural horse pose, and I know very little about horses. 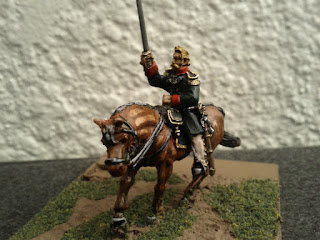 I grapple with the decision of whether to highlight the greens of my Russians lighter (their green was very very dark). I'm also slightly critical of my horse highlights, lack of markings (socks, spots on head), and the golden shoulder boards maybe should be more gold in the recess?

Fairly pleased overall though.
Posted by daveb at 11:36 PM 2 comments:

Elladan was a bit ho-hum this week, so I decided to lead with the mocking beast, and obvious copy (but copyright dodge) of a mimic from D&D. Adventurers! Always consider why there are eaten piles of corpses/bones around that pristine treasure chest!

This one was sorta fun. I got to use some of the expanded range of pink/purples I've been collecting lately. The gold in the mouth is possibly TOO gold, and the edging/metal banding doesn't pop much, but I very much like the overall effect. I tried to create a slit eye, which I think comes across most in the right photo. I also ended up sculpting a base, which is just passable. You can spot where the slathered on grey didn't quite cover the miliput, but from range it's hard to see.

Back to Elladan. Ho Hum. Generic elf ranger. Whoo. I did end up giving him pupils of the same colour as his pommels which was a fun effect. Too bad about the over paint in orange obvious in the middle shot.

I'm not super happy with his skin tones. Also, I wasn't too sure what to do with his various kit. I wanted rustic, forest, but that largely comes out as boring in this particular production. Oh well. On to the next!