The second part of my Carthaginian army. These are all Old Glory figs bought as part of the Late Carthagian Army Pack. They are based for fields of glory. Basing is on mdf bases from minibase, with tea leaves and static grass. I may still varnish them in the future, but they are 'done'. 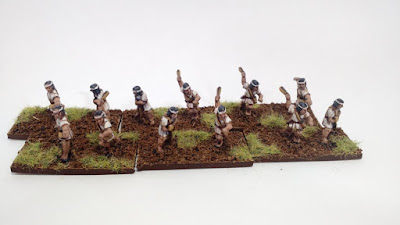 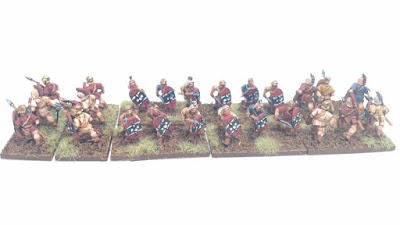 Spanish Scutarii. Medium foot. Pardon the  washed out pic. I was fiddling with the camera (phone) settings. 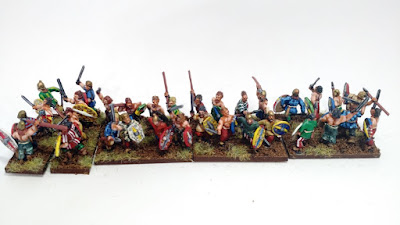 Gallic warriors.  Heavy foot. Shields include a number of 'little big man transfers'. They don't have an old glory set so I got another manufacturer set and the selection of decals didn't match the shield selection well and required a lot of trimming and bodging. 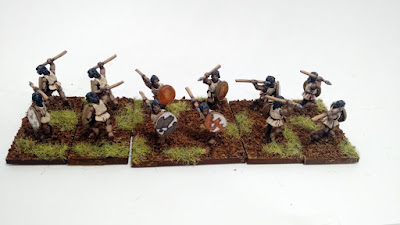 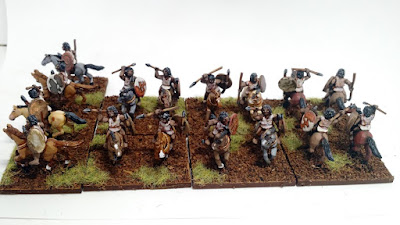 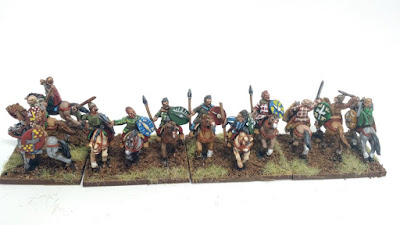 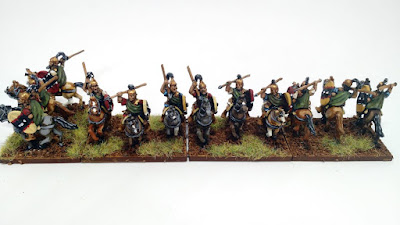 I've finally got my picture set up ready to go again. Here are the 15mm Carthaginians I recently completed. They are mostly Old Glory figures, from their late Carthaginian Field of glory army pack. One of my buddies was cleaning out his stash and gave me a bunch of corvus belli ancients, which I believe have moved over to Bueda.

Basing is on mdf from minibases, and with tea leaves and static flock. Varnishing may happen in the future. 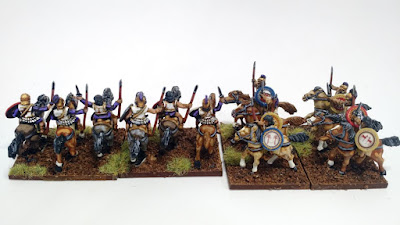 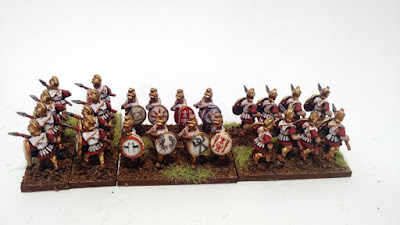 Heavy foot. First of these veteran African spearmen I painted. The transfers don't like the very rounded shields to much. Later iterations I figured out how to make relaxation cuts to help with the problem. 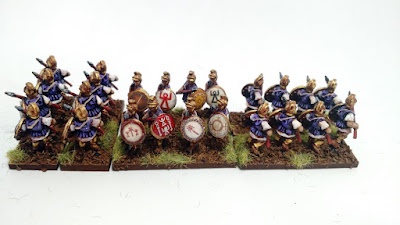 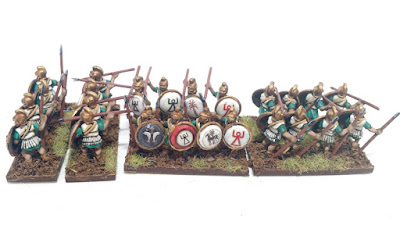 African Heavy foot. Colour scheme was copied off Joels 28mm carthage spearmen. It might be sacred band colours? Which I think by the late period don't really exist anymore.

African heavy foot. Last unit to be painted. These are Bueda/Corvus Belli. The spears are seperate and a hassle to glue. They also break off occasionally. Boo. 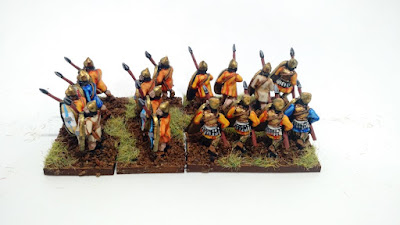 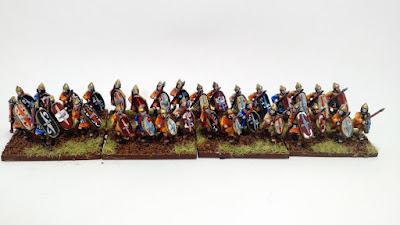 Poeni. Med foot. I needed to bump up the order size for better shipping and a bigger discount. Knowing nothing I chose these guys. They are basically militia. You can take them as poor troops, or terrible ones. Whoo. Helps fill holes in the line I suppose. All shields were hand painted (and look a bit tatty). I'm also dubious about the orange colour, but thought that there is a lot of neutral tones already and best to add splashes of colour. 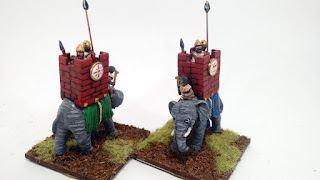 Elephants! Of course I took the picture of the wonky eye on one. Also, the 'spears' were simply wire. I sculpted a bit head on them. Probably standard poles, but I didn't want to bother with flags at this point. 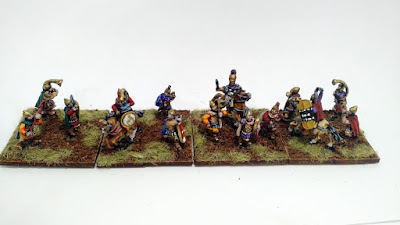 Leaders. I aimed for a mix of colours from the various units I had painted. The green heavy spearmen arrived after I had painted these guys. 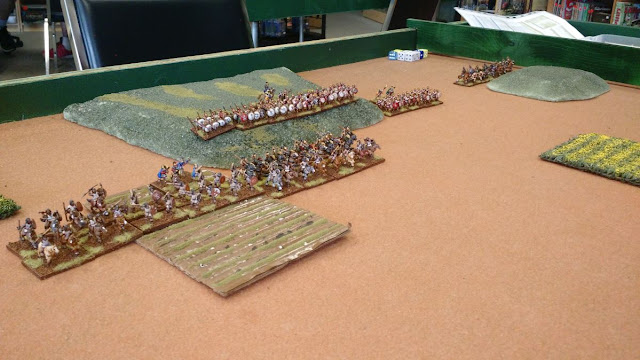 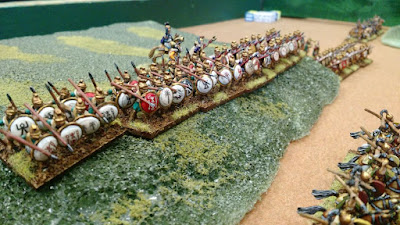 General Nate and myself got another game of Fields of Glory in recently. For the first time I tabled my own painted forces, which is always exciting. The Carthaginians I received early of 2016 so it's been a while, but then again a finished project is pretty amazing. I'll have to do a parade post soon.

My opponents were the Gauls, who it seemed often were either facing even odds in combat, or had slight edges. It was quite disconcerting, outnumbered, without any obvious advantage. I suspect this is the nature of the Carthaginian army....lots of options but not great at anything. What a choice....

To battle after the jump

All Units Engage (playtest) - The Raid

Thomas (Peabody here!) is a gamer with many irons in the fire. I was fortunate enough to hang out with him recently and get to play test his set of development rules "All Units Engage". Being a longterm active gamer with strong feelings, Thomas has cherry picked his favorite game mechanisms, rejected the ones he doesn't like, and worked like a dog to lean things down to a fast play easy to learn/remember game set. I think he is well on his way. 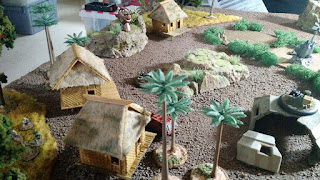 We played on a 3x3 table with 15mm figs, but the system is scale agnostic. Having never played I was able to quickly get a handle on the turn flow, and even the tactical implications of decisions within 2 turns. There are a whole raft of missions, but they largely divide into balanced (for the competitive minded), asymmetric (for those who aren't bothered by 'fair' fights), and home/away/neutral (which have a fun mechanic when you capture objectives that make you roll on a random tables to gain...or suffer...effects based on whether you are on friendly, neutral, or hostile battle fields. Great stuff for ladder campaigns. 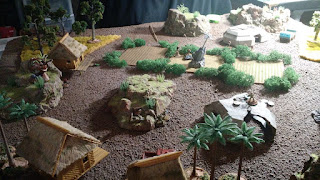 The turn is alternating unit activation. Both players dice off at the top of the turn and suffer modifiers for lost or pinned units. Units have 2 actions (move, fire, aim, unpin, capture objective being the most common) with each action being fully concluded before the next. Reserve fire and movement allow for overwatch/reaction by the enemy. Unit profiles are quite light with move, will, armour and combat ability. Weapons have their own stat line (such as automatic rifle, heavy machine gun, autocannon). Up to 2 Special perks/abilites allow for more chrome/differentiation of unit, and this can be wrapped up in 'theatre special rules' (this allows you to state all your insurgent troops/Viet Cong have some special ability without filling those 2 slots). 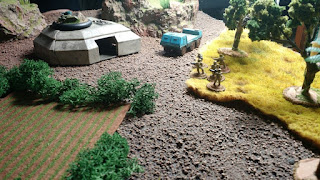 The 'Raid' is one of the asymmetric scenarios where some crack troops are racing in and capturing an objective held by second stringers. They are heavily outnumbered and need to grab and go. The victory points definitely favour the defender in any sustained engagement (who need to secure a random objective as well). The scenario probably needs some slight tweaking to unit profiles and/or vp as it's still pretty challenging for the attacker. It's a great scenario for learning the ropes of vehicular combat and air operations (the attackers get some sort of flyer (helicopter/vtol) while the defenders get some sort of light combat car (armoured car/technical/jeep)).

Thomas is very excited about the wide scope that the rules can be used for and I can quite easily see it myself. Combat is pretty bloody but the escalating morale penalties for lost men causes a lot of pins and lost actions instead of single man units charging to their doom. The VP's in this scenario certainly encouraged hunting and killing of units.

I'm looking forward to following the development of the rules (there's a facebook group), and hopefully get some of my small number of painted figs on the table for short fast games.

Once more back into the fray! Doug (of Dots of Paint) hosted his annual wargaming bash. Once again we were treated to a Guard du Corp mass battle (fast play convention rules set which sounds as though it's getting *very* close to being finalized). We were teased with 'it's a historical battle, but not a napoleonic one'. At least one of our American comrades puzzled it out and Doug briefed us. The battle is Anteitam (spelled backwards as the map is reorientated on the compass).....the french are the confederate defending a town just over the river, which includes a set of fortifications/sunken road, against a much superior force. The russian/prussian force is the union who historically was led by McLellan.....not the most aggressive or daring commander. The troops are activated progressively during the day. I'm not sure if this was due to space limitations to advance, or an intentional 'echelon' type attack, or foolishness (my history on ACW being pretty weak). 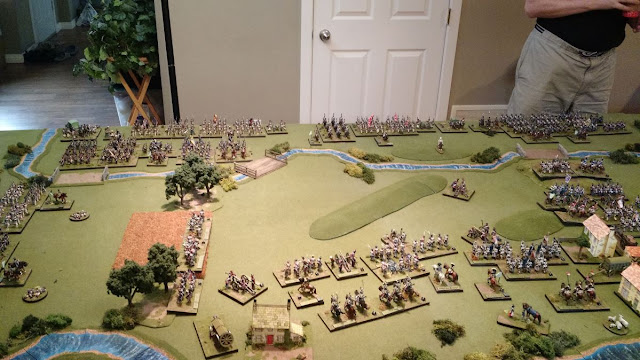 French in the lower right. Defending the corn/wheat fields to the left, and two river crossings on the top.