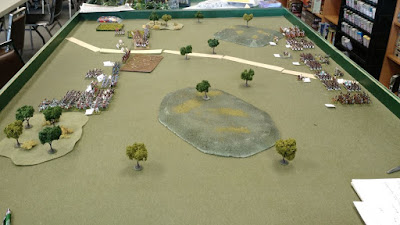 Nate has gotten a fire in his belly to play some Napoleon's Battles. He has been steadily working on Austrians and Russians and, at last, we had enough troops to have a go at it (borrowing some italians and saxons as opposing forces). The scenario is that the allied Saxons and Italians are covering the retreat of the French army over a river after fierce fighting at leipzeig. The Russians and Austrians are trying to cut off this route of retreat.

Once again I dropped in on my friend for a game of armada. Since I'm pretty clueless on the game, he has been making balanced forces. This time we played with some of the smaller support ships, and more fighters. 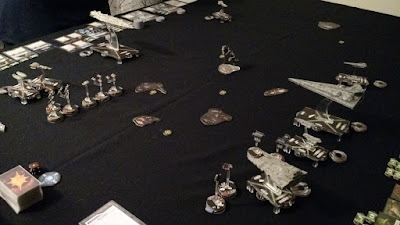 Our mission was to pick up 'intelligence' tokens, with a single nominated ship on each side. We both 'cleverly' hid the tokens in the asteroid fields, and set up for a head to head pass. Garret used a fast blockade runner, while I was hoping to explode him with my Gladiator. Unfortunately I've found the gladiator is a knife fighter that is incredibly tricky to actually get into firing range. Boo. 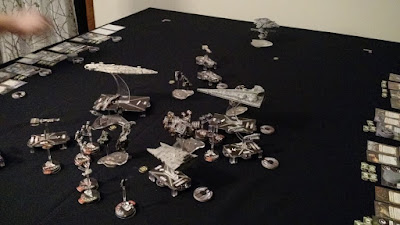 The rebels had admiral ackbar who adds a sick amount of firepower to all the broadsides, which ended up being pretty punishing over the game.