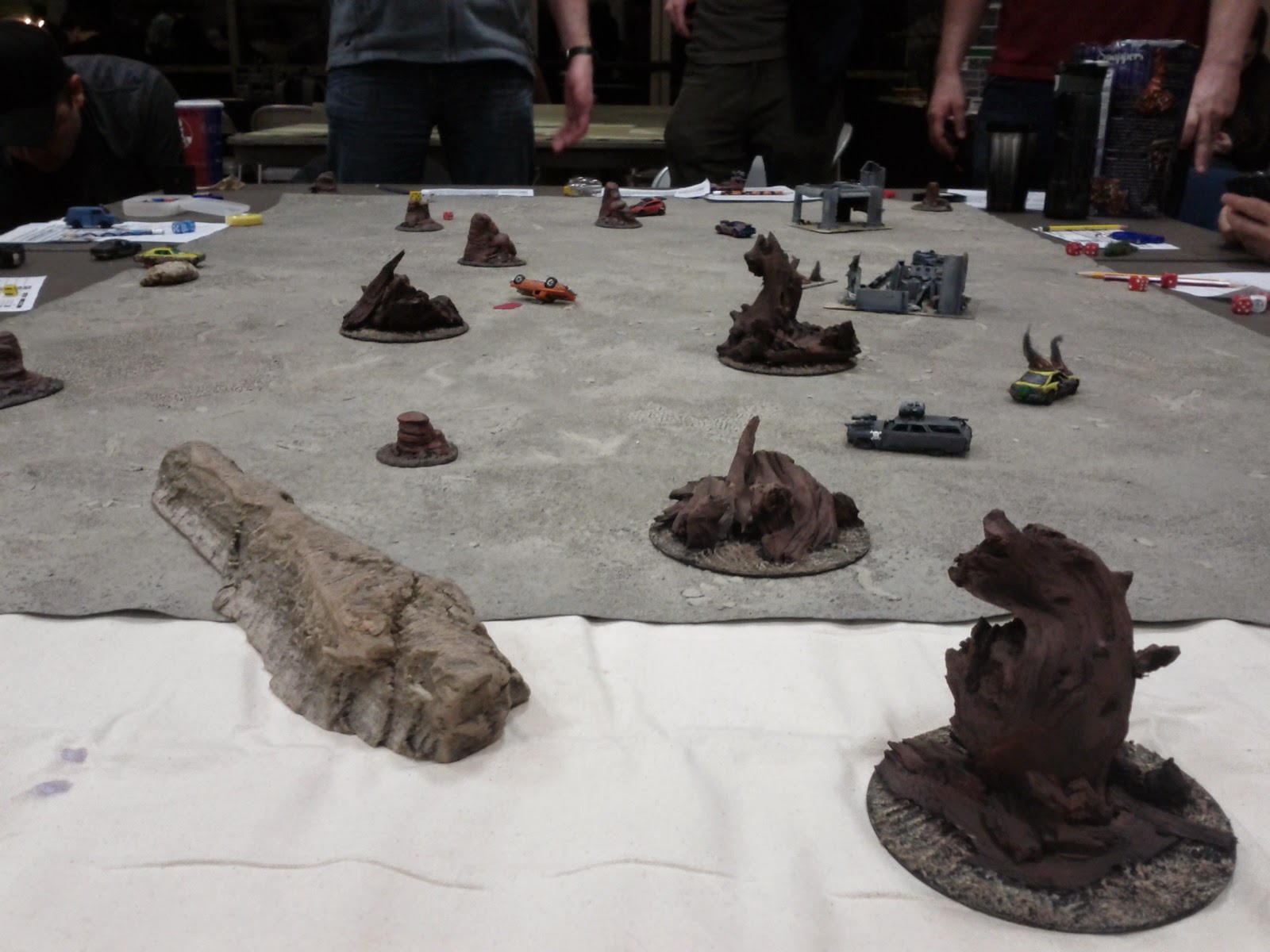 The local game convention(perhaps THE local game convention) 'Trumpeter Salute" happened this last weekend. There was a bit of a scramble to find extra hosts for games (as the numbers were down a month or so ago), so Bryan and I decided to host a game of axles and alloys. Borrowing some of Cameron's gear, we proceeded to add more cars, add game play assists (white board, rules QRS, a spinner for direction when you lost control, a stack of pre generated car rosters) and some terrain.

We hosted saturday night, and managed to get 8 of our 12 spots filled. Based on Doug's report from Salute (HERE) most games were struggling to get enough players, so I think we did quite well. The players seemed to have a blast, it appeared that many of them were friends to good natured razzing and grudge kills were the order of the day. 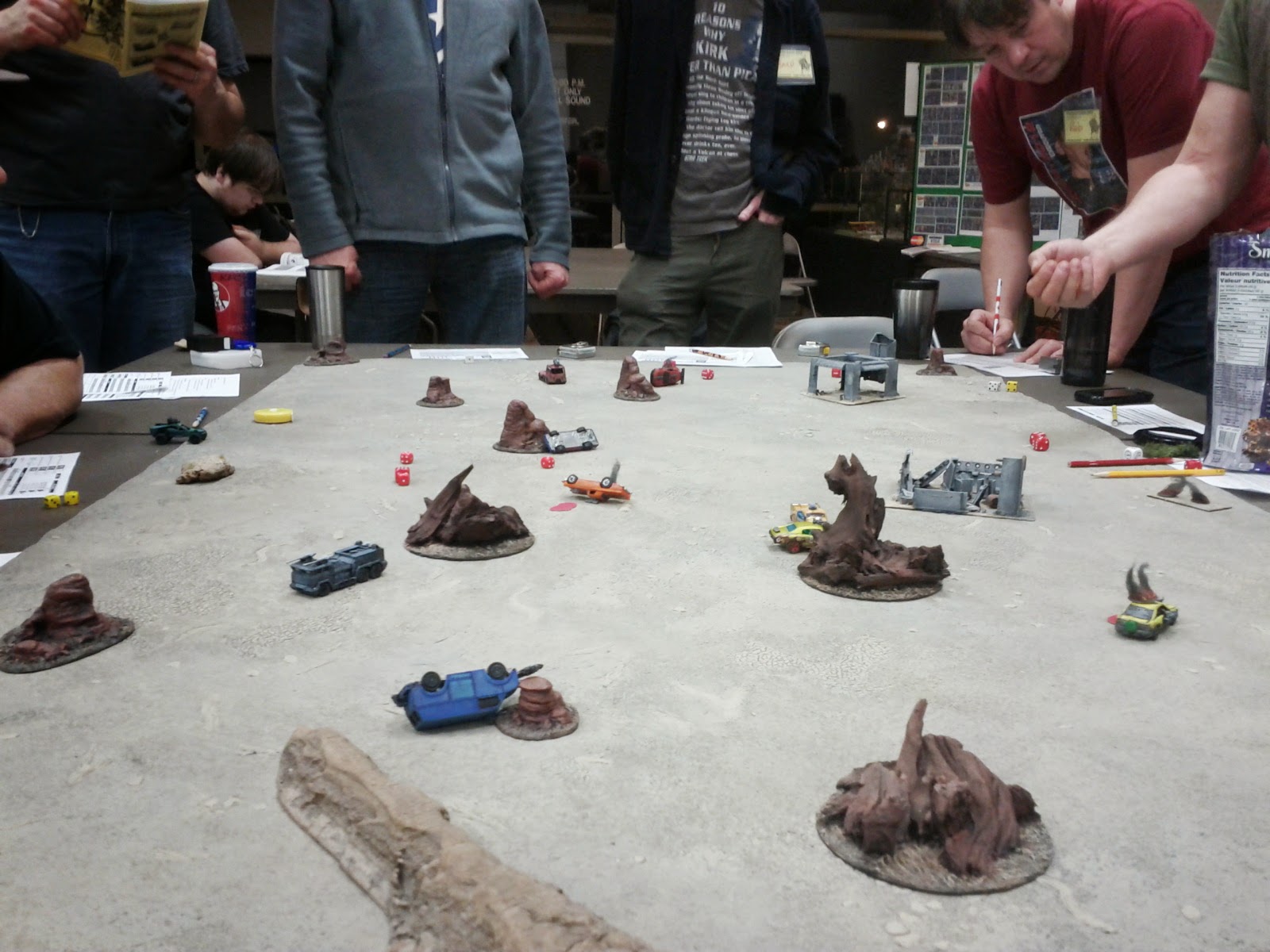 We had a rolling entry, so if you died, you grabbed another car and rolled in off the edge of the board the next turn. Points were given for kills (2 points, and steal half of the dead players points), and deaths and kills were tracked. We ran through about 20 cars in just over 2 hours before everyone petered out from a long day of gaming. Everyone was pretty happy to get out a bit early, as some people had been going since Friday night, and others had a long game session to host on Sunday.

Email ThisBlogThis!Share to TwitterShare to FacebookShare to Pinterest
Labels: 2015, Axles and Alloys, GdC 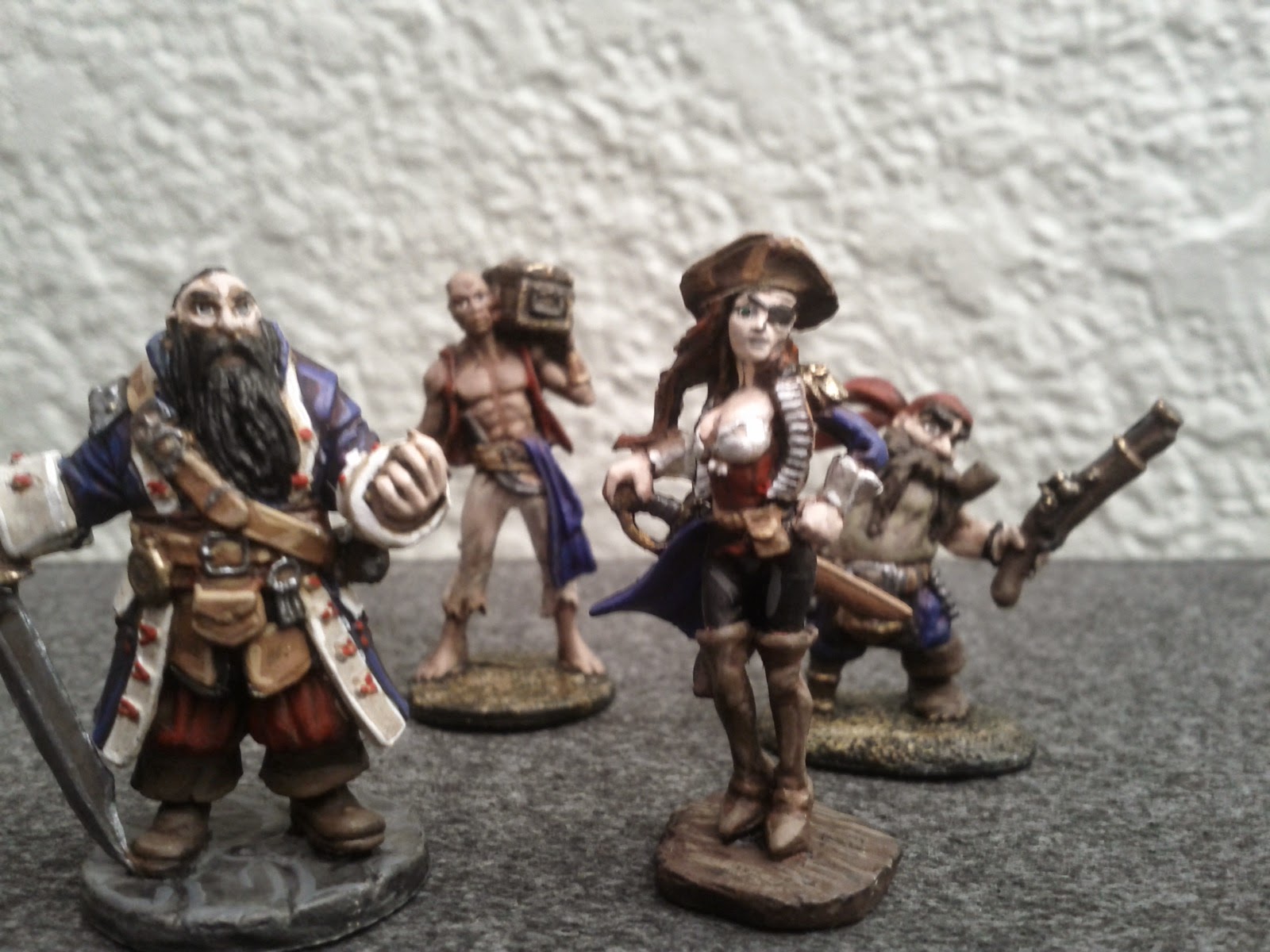 I fell off my posting scheme to get through these guys this week (the dangers of stretching out your progress). The last two figs are definitely a bit weaker, mostly due to painting, but I'm not super impressed with the sculpting of the treasure chest toting fellow. Perhaps it's more realistic proportions vs 'heroic' models that are so prevalent. 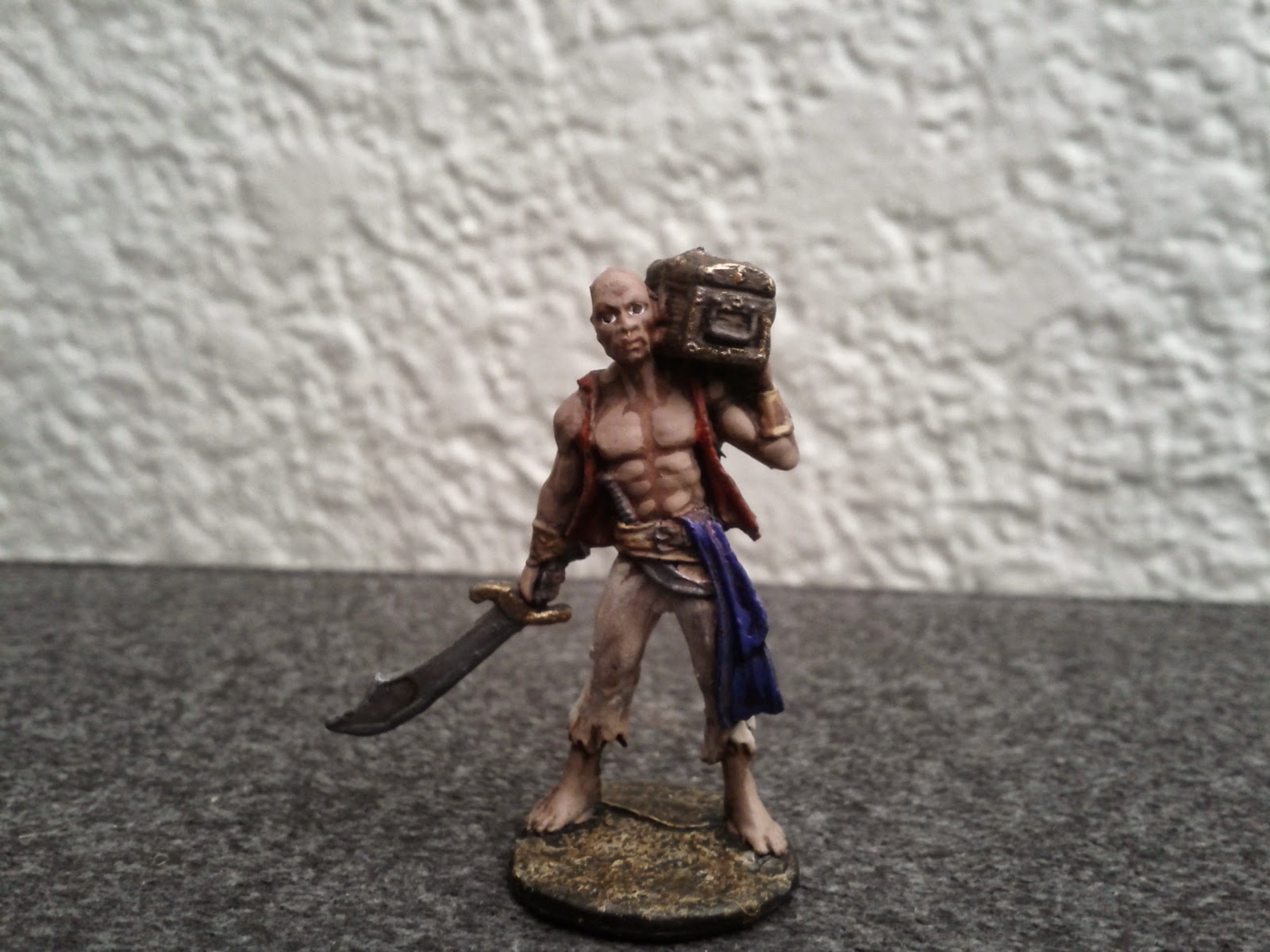 Hajad, the treasure bearer, I think had some fairly decent skin tones done. I painted his eyes which were okay, but I don't think the brown spot of colour for the iris was the right decision. Too similar to the skin, it seems to detract from the eyes. Perhaps no iris would have been better.
The metallics on the chest edging could benefit from a highlight as well. 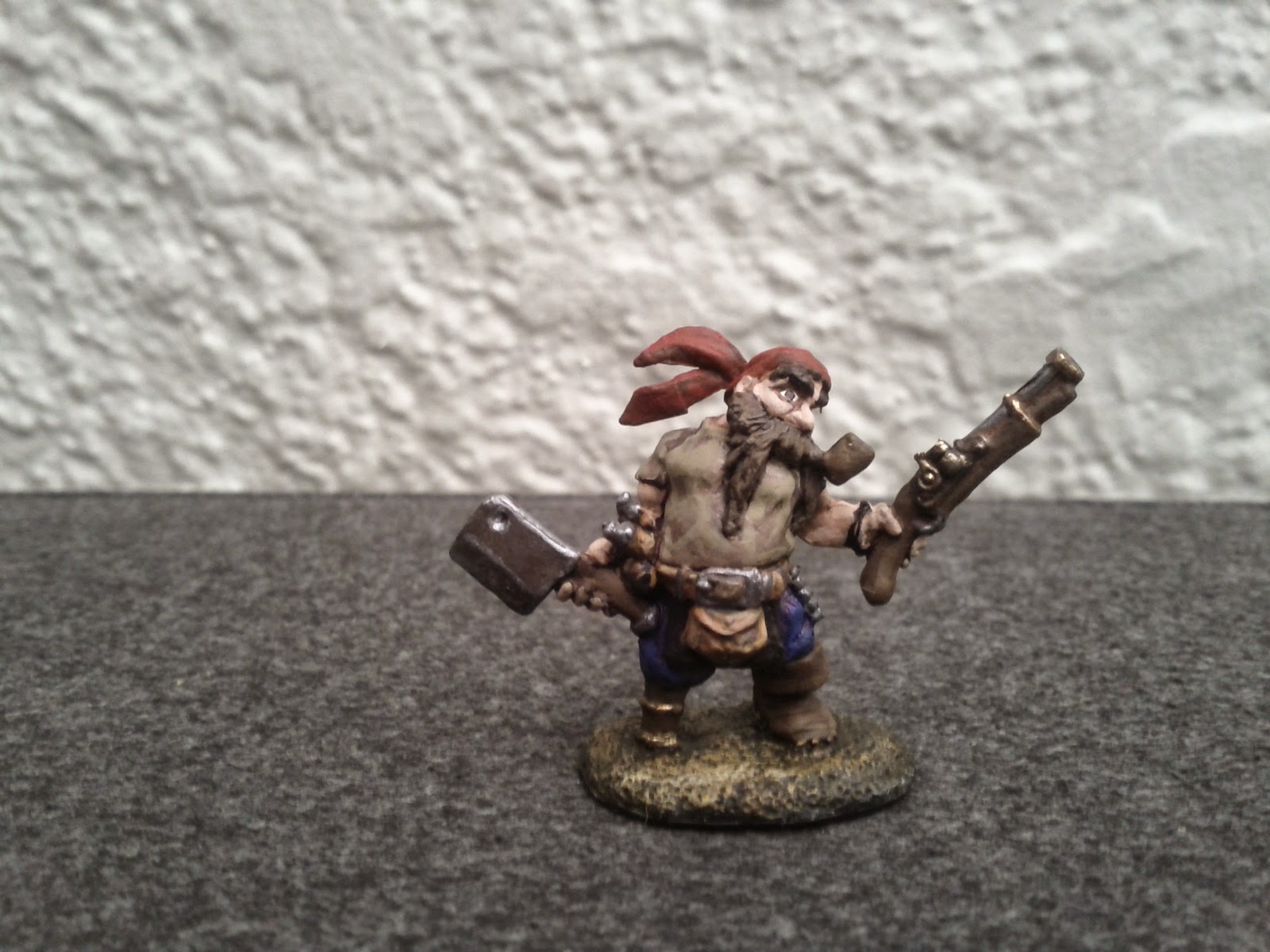 Grim could have had some colourful food splatter put on his chest. He also has a small apron I left black (behind the pouch on his belt). I was a little out to sea (haha) on what to do with it. The wood stock on the gun is so large, I'm not too happy with the uniform brown I ended up with. And the dew-rag could pop a bit more with some highlighting.

All 4 figs were completed on a pretty tight schedule considering I had family staying here for most the week/weekend. Once again, they are bones, so I'm happy to consider them good enough.

Yet another Bones miniature. I have to say, I appreciate the monday deadline to get these things done. I obviously work better with deadlines.

My wife was a bit disappointed in this mini, as it's a typical under dressed, over busty, unbelievable body shape, female fantasy trope. Can't say I really disagree. Her generous endowment did allow me to practice my skin tones however.

I was hoping for a more rosy/ruddy colour, but I used reapers flesh was and was quite unhappy with the results. I will stick with vallejo sepia, or GW devlan mud in the future (mind you, I really like reapers paints). As a result, I needed to work hard getting back to a reasonable skin tone, which brought the tone too light.

I ended up preping and priming all 4 pirate figures (that I noticed) from Bones 1. So this is why there's a run of these figures. I tried to match up the colours a bit to make them appear to belong together. Unfortunately the bases are quite different, so the effect is lessened. We shall see this next weekend.

I've decided to try working back in time to the caffeine forge blog reaper bones painting schedule (hopefully that makes sense). I'm trying to keep up with the weekly fig, but I decided to start catching up with the other folks by going back and doing what I've missed.

My first hop backwards (skipping one fig for now) is Barnabus. Obviously a pirate sea captain of some means. What the heck are the bevy of skeleton keys for? There's also a hint of a leather jacket under his coat to help him survive those pressing melee's on the high seas.

I rather like the sculpt of his sea coat and it turned out quite well. I passed up white and red striped pantaloons, but it was probably the right decision. I was undecided about leaving his hair black with no highlights, but I think it turned out well enough....a young and hungry captain this.

I think my biggest disappointment was his hand gun. The molding was a little wonky, and the colours didn't turn out super great.  Also the basing as stone instead of wood decking, for such an obvious naval man, was a bit weird. Oh well.
Posted by daveb at 10:23 PM No comments:

I managed to while away most of my time this week fairly unproductively painting wise (Video games and roleplaying games were pretty successful though). At the end of the weekend, racing a deadline of getting enough sleep for monday (and losing an hour by the time switch thief!), I managed to bang out this mini.

I did some editing of the figure, as I didn't like her floating sword behind her, nor the strange whispy things coming off her back. I suppose it was supposed to be a floating sword of something, but I lopped it all off, and the head of the sword as well, and firmly jammed it into the scabbard.

I took out her little horns as well, but left the strange bony mantle thing. I suppose it appeals to me from a warcraft esthetic.

I'm fairly happy with how the skin tones came out. I think the model looks a bit better in person than in these pictures. I ran out of time to make the back look better (a simple wash would have helped, and I feel now I should have highlighted the leather, and put a dot of colour in her eyes. Maybe even some colour to the lips. It's possible I'll go back.....but more likely I will keep forging ahead. There are a LOT of bones I need to do.
Posted by daveb at 10:18 PM 2 comments: 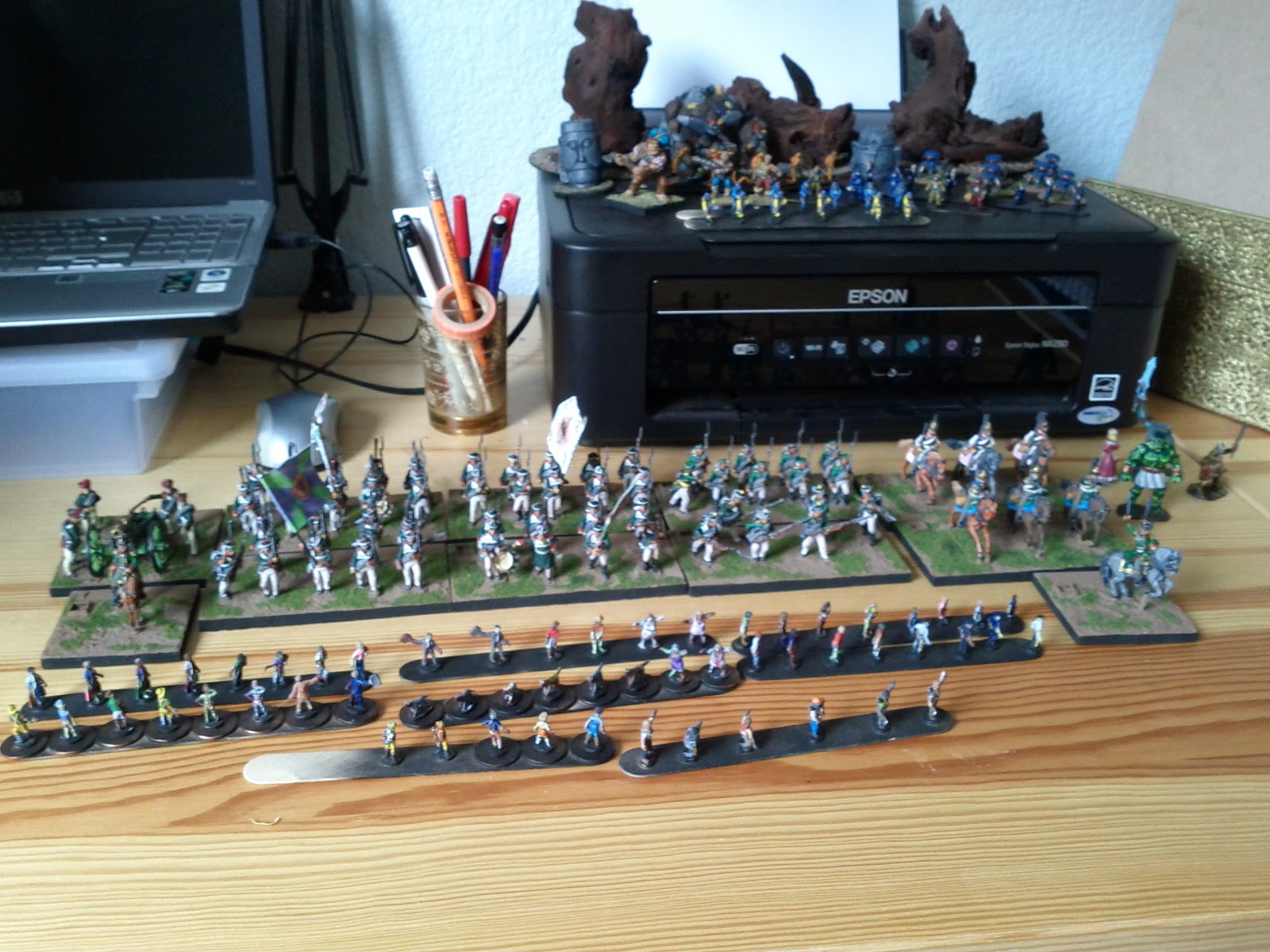 The 6 Month Mountain Reduction & Painting Challenge started in September. It's been a fun 6 months. Between a blog roll (here), and a facebook group, we small group of challengees kept in fairly regular contact and were able to share stories of success/failure, and words of encouragement.


The challenge (roughly) involved not buying anything for 6 months (baring 2 'jokers' as cheats), and posting weekly updates. It was not unusual for people to drop off the face of the planet from time to time, sometimes resurfacing........life happens, right? It's interesting to read the summaries of the group now, as it was hard to keep track.

My own summary follows *The below was copied directly from Dave Brawley’s great blog “Towerof the Archmage” and my own answers thereafter.*

Email ThisBlogThis!Share to TwitterShare to FacebookShare to Pinterest
Labels: 2014, 2015, 6MMRPC

My weekly submission for the Caffeineforge Miniature Monday (a weekly Bones mini paint up).

This week it was a civilian, which was a fun change. My colourations obviously don't suggest a grandmother, but a younger domestic. The eyes I was quite happy with because eyes are so fantastically difficult.....and they are looking the same way, and the dots are dots. My wife helpfully noted that she has creepy eyes. This, unfortunately, is true. Bah. I'm still happy with the technical results, if not the final result.

Free handing the white trim was fin, although with all the ruffles I don't think it's perfectly accurate. There's also a few smears of overly thick paint, but it came out pretty well.

I'm relatively happy with the colours. I note now that I missed painting the band on the broom head, and her blonde hair doesn't pop quite enough (probably need to end with a tiny highlight of white). The ground was painted grey to suggest a slate or tile floor that would make sense to sweep.

A fun little mini here that was an easy project to paint.

Final Week of the 6 Month Mountain Reduction & Painting Challenge! I'm sure I'll get up a post later in the week on that. I was, unfortunately but perhaps in common with large segments of the population, laid low by sickness this week. In a late week rally I managed to get 2 figures done. This guy, and my submission for Caffeineforge's Miniature Monday which I'll post Wednesday (don't want to pre-empt the reveal on Mondays).

This guy is another one of the Bones miniatures which I have recently (much delayed) started on. They are sorta fun in a way as I have but a week to do them, and I try some new (to me) painting techniques on them. I also didn't really 'choose' them, so there are lots of figs I probably wouldn't have bought on my own. Fun stuff.

I was hoping to make a jade type colouring scheme. One recipe I found on the interwebz suggests highlighting in green on the lower ridges (sorta an inverted highlight), which suggests light transmission. I tried this....and probably should have done more gradation. I didn't have time or the commitment. I think I'd need to experiment with blending which I haven't been brave enough to face.

I tried to free hand an eye of osiris on the belt buckle, but it's pretty much too small to see in real life, never mind this picture.

My wife was lukewarm on the effect, and I'm a bit uncertain as to my results this week as well. Comments welcome!

Postscript: I tracked down the Caffeineforge results from the same mini here. I must say it's quite interesting to see how many people chose to do a similar green scheme. One of the most interesting parts of the weekly submission is seeing what others have chosen to do.