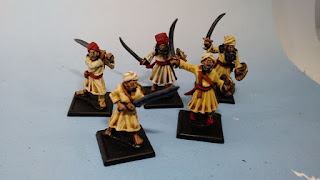 Following in the column of the Zanzibari sultanate we find some hirelings. The Baluchis (as per wargame foundry) were a somewhat hereditary warrior caste. They could come from Africa but Arabs and Indians were common as well. These guys struck me as fairly Indian in flavour, although the colouration of robes followed the zanibar theme (yellows and whites). 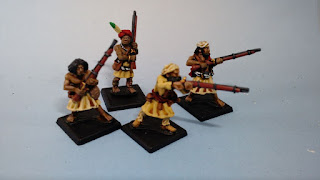 Once again there was some challenge making visually cohesive units. I don't think these guys suceeded, though luckily the sculpts are fairly unifying (swords/shields and extra long muskets) and the unit sufficiently different from some of the other units. 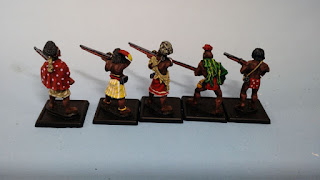 The Ruga Ruga were bandit mercenaries. They smoked drugs, wore 'fancy' clothes and acted tough. I imagine their direct spiritual successors are fairly prevalent in bush war africa of the modern era. 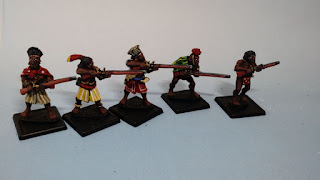 These guys were pretty fun to paint, and despite having individualized fashion sense, I think the unit is obvious that it belongs together.  It did take a longer time to paint for all the extra colours and the hemming and hawing about how to paint them.

One of our local gamers mentioned collecting a force for Congo. In one of those strange series of events, I ended up spotting a wicked deal for a copious amount of lead on TMP, and then needed to buff up an order to get free shipping so ended up ordering the rules. Neither the other local gamer or myself have made much progress past that. No longer! The Sultanate has stolen a march and woe be those fools who stand against them!

The figures are 28mm wargames foundry darkest africa range. They have a lot of character. I ended up with way too many and fobbed off the lot of africans with looted european gear (and carrying heads etc) to a buddy to return a gift of ancients. Fun stuff hiding there.

The "trained troops" have a better looking rifle; A repeater I suspect. The zanzibari's have slightly shoddier weaponry. Given the zanibari national dress was lots of white gowns it was a bit tricky to add colour and maintain 'unit' groupings. I hazard that I have succeeded.

My one clanger is the eyes are probably a bit too white, though it's less noticeable in person, on the table, at 3 feet. 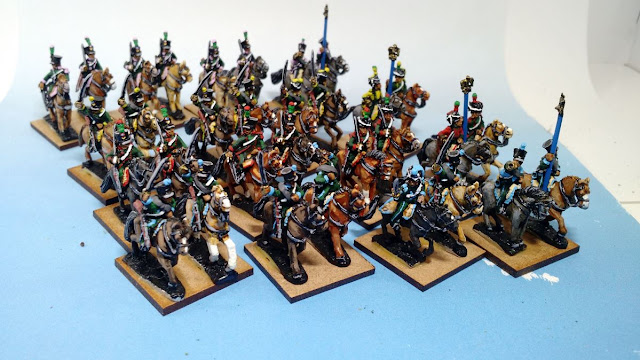 Gosh, multiple posts without napoleonics, I was starting to get worried too. Here we have two bags of old glory 15mm chassuer a cheval all painted up nice. The problem with these bags (in my opinion) is that you end up with too much command for most systems. 32 figs with 4 standards and 4 musicians is a bit bonkers. 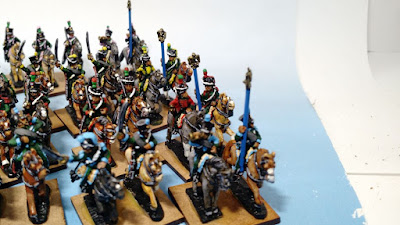 I decided to go for a bit of colour and did 4 distinct unit colorations (also I had 4 command stands). Though these will be used for napoleons battles, I expect I will use them for other games, and can't say I'm a fan of basing 4 cavalry in a deep narrow base. 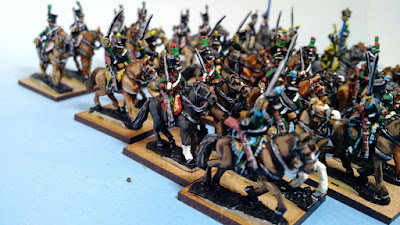 I'm getting terribly close to actually being able to field a coherent french force in 15mm. Zounds! It's only been like 7 or 8 years since I got my huge lot of 15mm naps.
Posted by daveb at 7:37 PM 4 comments: 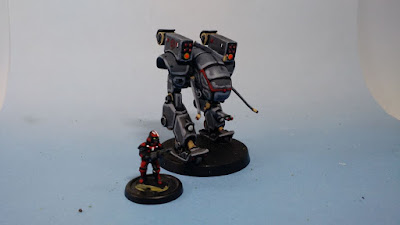 Another contribution to the XCOM project. I feel like this is the 'avatar project' in that it veeerrrrryyyy slowly makes progress....and then is knocked back a few steps. The model has been sitting in my boxes for far too long (do we detect a theme here?) so I'm pretty chuffed it's finally painted. 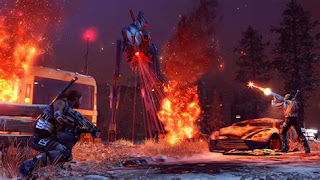 The sectopod is a tough enemy in the video game, being a walking tank. It uses some faster firing weapons, but can power up for a big area of effect devastating attack. I find it a bit more tough than dangerous....I suppose this would be true for a tank vs infantry.

A set of fortifications (unknown manufacturer) that have sat in a box for years. I think this may have come from a bartertown swap.....maybe. I know for sure I didn't select them directly to order. Maybe a lot of terrain?
Anyway, having done some vietnam fortifications in the past I had an easy paint recipe, so on the table they went to be worked on when I am burnt out on batch painting. 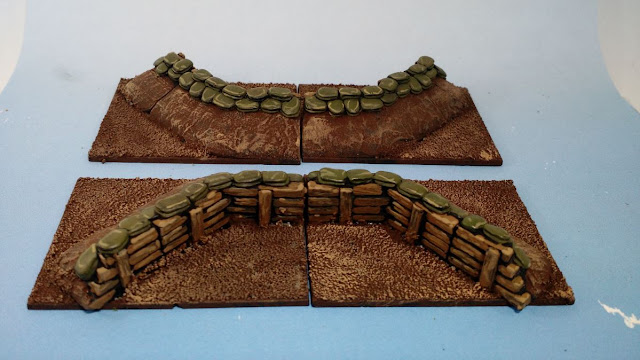 I'm pretty happy with the effect and amount of time it took to bang these out. It's a bit unfortunate there are sandbags as that makes them less useable for a wide range of time periods.