This is a continuation of the battle of Vitoria (pt 1 and pt 2). The French have found themselves under an assault by a large coalition army across most, if not all, of the crossing of the river they have encamped behind. In addition, a enemy force has appeared on a flank on the same side of the river. Their supreme commander, the installed monarch Joseph Bonaparte, is busy partying and ignoring the battle and the all important baggage train will not move until Joseph is startled into action (by a corp morale failure). 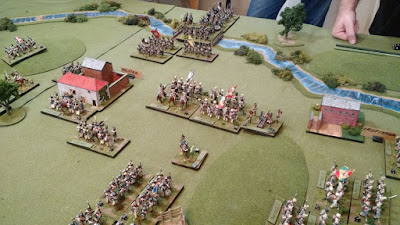 Gazan has managed to delay 50% of the attackers for long enough for D'Erlon to set up a second line of defense just beyond the hills.

To the right we see D'Erlon contesting the crossing to the North and thereby holding Gazans right flank. In the bottom and bottom right troops from Gazan and Rielle are moving to establish the second line. 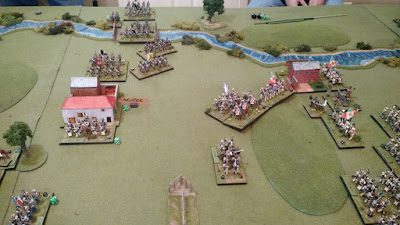 A clear view of the gap that has developed between the front line (left just off picture) and the second line (right across hill). D'Erlon trades space for time as he falls back on his defensive line. Clever positioning of his artillery costs von Picton heavy casualties  and makes him unwilling to pursue closely/agressively. 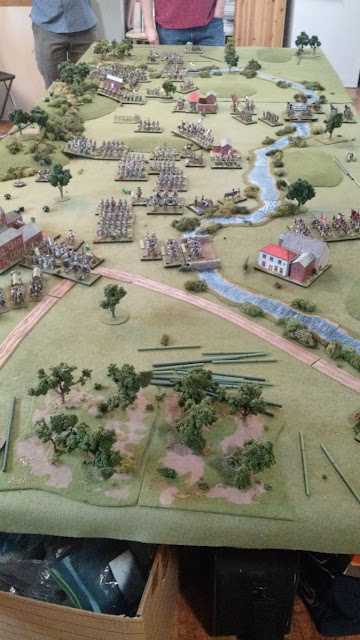 A full table image we can see the second line in the centre. A large mass of troops in the upper left is where the coalition has been snarled up by an aggressive cavalry defense/local counterattack by Gazan.

Lower right Rielle is scrapping for the village that dominates the 3rd major crossing. Shortly Grahamski, his opponent, will dominate the road leading down right (North East) with a cannon, thereby closing the main retreat route of the french.

Joseph Bonaparte remains unmoving in the village to the lower left with the baggage train (2 of 3 wagons visible).