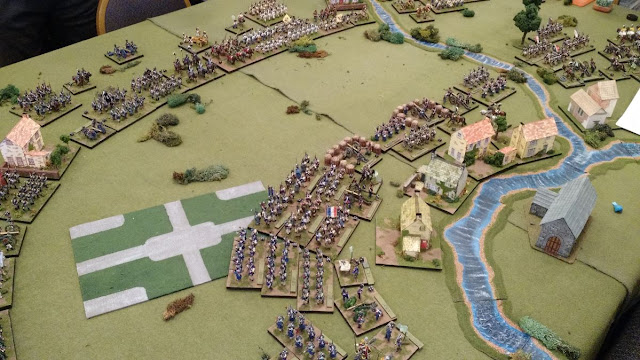 Saturday Morning has the big battle of napoleonics that Doug organizes every year. There is a pretty usual roster of guys who agree to paint parts of the OOB in order to guarantee a spot at the game. There's usually another 2-6 commands for those who haven't painted a force. This year Ian and Craig (?? I'm gapping on his name) BoB were late to arrive and didn't have a game to play so they took over the Russians and Prussians facing my forces on the french left flank.

Dresden sees the allies trapping a large french army and preparing to crush it with numbers. Suddenly Napoleon shows up and throws the allied command into indecision about whether to attack or not (the plan to attack everywhere that Napoleon wasn't had been agreed upon earlier). It sounds as though the attack went in as there wasn't enough time/organization to stop it.....but the allies held back a huge amount of their forces. Good for ensuring a french victory historically. 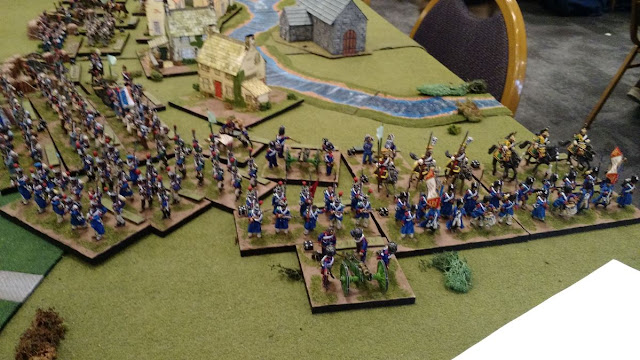 My life so far this year has been consumed with a growing infant, multiple sicknesses (most probably arriving from the illness skunkworks that is daycare, and some requiring antibiotics). I was also prepping a large contingent of french for Dougs (dots of paint) annual big naps battle at enfilade. True to form, most of us were finishing the figs at the last moment. I was not the worst, but I finished flocking 20 minutes prior to the drop dead time for loading the car. I still haven't taken the glamour photos that will document the real work.

The addition of the wife and 20 month infant slowed the trip dramatically so I missed the early afternoon session and arrived for the evening session having checked in and loaded up on groceries. 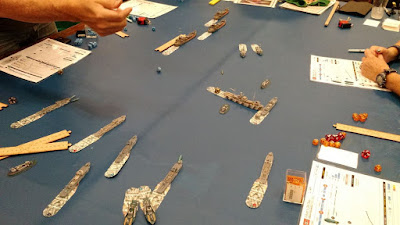 I was booked to play 'cruel seas' a fairly new offering from Warlord games. I hadn't realized it had only been out since December. My side took the German S boats against 3 British freighters and a armed trawler and a host of small escorts. It was a flank chase and there was opportunity for lots of torpedos flying across the table and, my word, ships can suddenly disappear under fire (one of my boats was hit by two hits by 3inch artillery pieces on the freighters....under 5% chance (my attacker rolling two 1's to hit). All I could do was laugh hilariously as my ship took a crit, caught fire (1 roll of 6 on a d6 for a diesel boat) and disappeared just as it had closed the distance to fire. 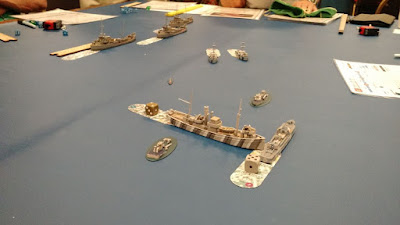 The figures are beautiful, and the rules were.....okay. Hilariously there was a steady stream of folks dropping by to check the game out who all voiced their dislike for the rules. It sounds as though the two key problems are: 1 - rushed into production there was insufficient playtesting and balance and the hardcopy rules have been revised into uselessness already. 2 - ships turn based on their speed. Moving faster gives MORE moves (i.e. flank speed = 3 turns, slow = 1). A slow boat (like a cargo ship) can crank in HUGE turns over a short distance compared to a 'highly maneuverable' fast boat which has it's turns happen over a much longer range. While not much of a problem in this scenario I can see it was an obvious issue. Pretty easy to fix though.....

I only managed 2 pics of the cruel seas game. I think there was a fair amout of 'not that interesting to photo' going on. Picture dump of other games in the same time slot to follow..... 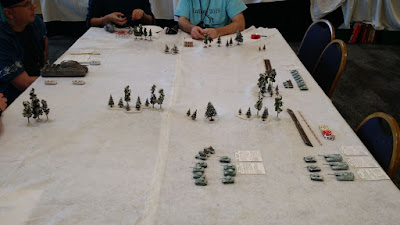 A 2 page home brew tank system. It seemed to play pretty fast and was pretty bloody. Great convention fare. I wished I'd had more time to peruse the rules. 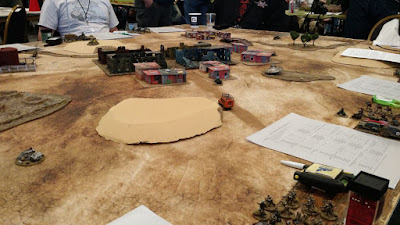 The host put on a great post apoc game last year. I forget the rule set, but the presence of the ufo suggests a 'historically inspired' scenario. 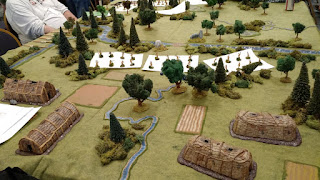 Indians vs colonists in North America. Musket era. Not sure the ruleset. Looked pretty. 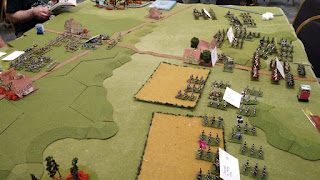 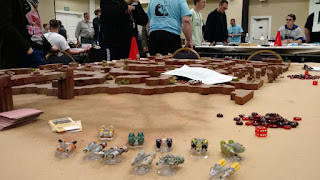 Good number of star wars inspired games over the weekend. Pod racing on a nice looking board. 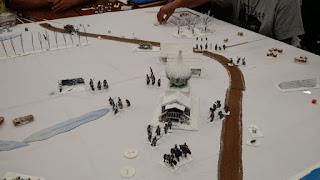 Doug's "retreat from Moscow" game. I think the Russians were rule directed and endlessly cycled on while the french attempted to escape of the board.....maybe with some treasure/rations/supplies? 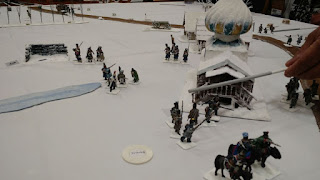 Dougs earlier writeup of the playtesting sounded pretty hilarious as the french engaged in some friendly fire at least once. I doubt it happened at the convention but I will admit to hoping for lightning to strike again.