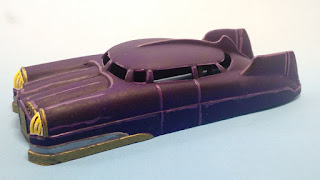 Inspired by Cheetor at sho3box blog  I tracked down some of these fine 'marx future cars' in order to add some much needed street traffic to my 28mm sci fi terrain boards. They've been a easy item to bang out when taking breaks from batch painting other things. I have to say I'm slightly embarrassed to realize I used a green paint scheme on the SAME CAR as Cheetor. Perhaps the sculpt just screams green in a subconscious way. 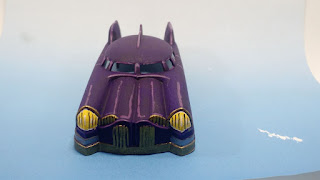 The windows remain to be done......in some way. I contacted Roebeast to see about some sweet vaccum made ones, but apparantly you can't track down the clear sheets of vacuum forming plastic anymore. Alas. Some of the hard clear plastic on almost any toy packaging was suggested to me which I will eventually get around to attempting. 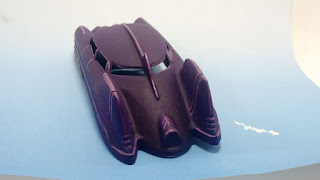 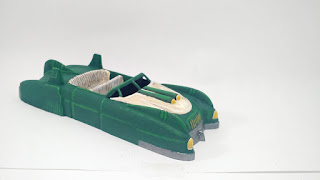 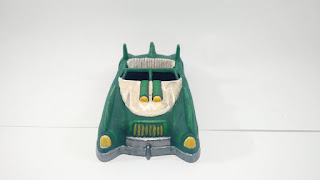 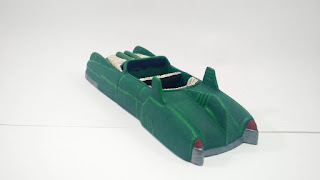 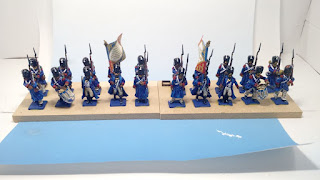 Columns are marching to the front! Doug of Dots of Paint Blog is organizing another battle at Enfilade this year. Once again he has mind tricked a number of us to paint up 'our own' forces to play at his game. Very clever strategy I must say. I have grabbed the Guard command for this one and expect that every gun on the table will be used to destroy them before they contact anybody. 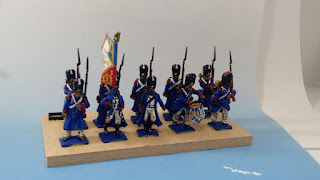 My figs are from the victrix old guard box. Doug kindly sent along some surplus Chassuer heads as the box is strictly for the guard. With 60 figs it's probably great for most systems but General du Corp (GdC) only uses 8-10 models on a single base for a brigade. Only 10 bear skins with monkey butts needed! I do have to say after a marathon of plastic assembly in December I totally appreciate the simpler Perry and Warlord figures over the highly detailed and fiddly Victrix ones. 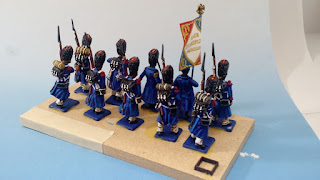 The flags came with the box, which was great, but the red all flaked off when I was folding and gluing them. Budget! I ended up painting the missing bits, but hope it won't worsen/continue. 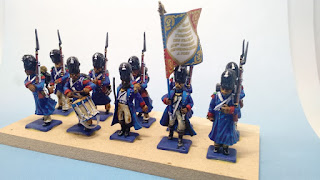 In what will likely give Doug a spike in blood pressure, I've now painted all the figures that I have from my command. I'm waiting for a shipment for the remaining troops: 2 artillery (8 figs + 2 cannon) and Heavy Cav (3 figs). 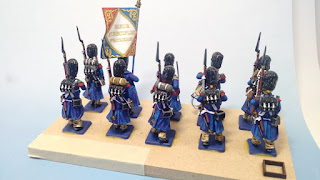 Given my....dilute focus, and the likelyhood I'll batch paint up some extra stuff at the same time, I may face a time crunch to finish them on time.

Here's hoping the post from the UK speeds up a bit from it's recently dismal speed... 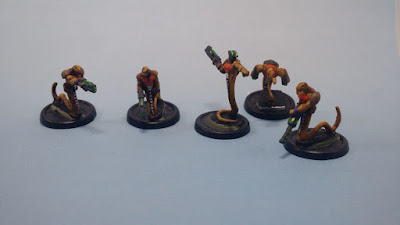 I managed to bury a few figs from my lead pile. These 15mm figs are from Critical Mass games and originally were 'mercenaries' but I believe there was a bit of a kickstarter to expand their range. I grabbed these fellows within the last year when critical mass were closing but hadn't yet been announced as being picked up by Ral Partha Europe. 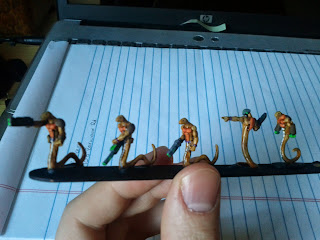 I previously had a set of 5 but thought it would be wise to get some extras when it was possible the range might disappear. Looking back at the blog I realized I haven't done anything on this front since late 2014. Shameful. Expect some developments soon. 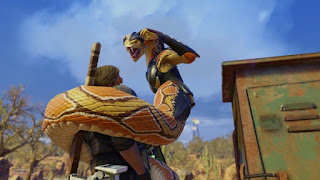 A number of people have recognized their excellent suitability as 'snakemen' miniatures to match the some of the enemies in the wonderful computer game series XCOM.  So this is what I was channeling. 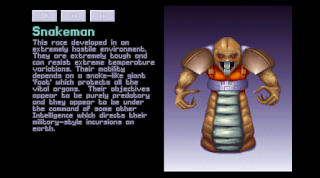 I first played xcom in the mid 90's and it was a very cool game. The reboot in 2012 took all the good, stripped out the tedious and made a sweet new package. Sweet enough to do a reimagining where the humans lost and are now the resistance in XCOM2. It's pretty amusing to see how far graphics have come in a side by side placement. 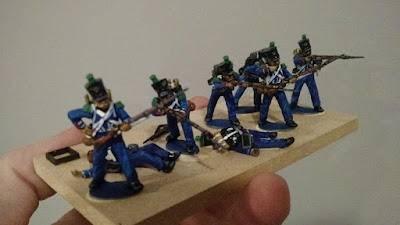 I spent a large chunk of Nov/Dec hobby time assembling (trimming, cleaning, gluing) models rather than painting. It's not terribly interesting to document on a blog. These guys were finished right around the start of the new year but I was remiss in getting a photo of them. 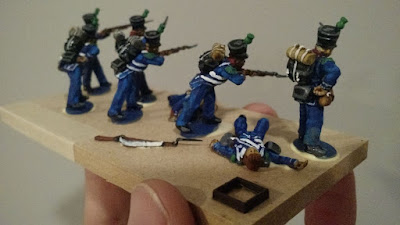 My big push was to clean up and put on painting sticks all my French 28mm stuff. Help to figure out what I actually have (as I have a small pile of warlord, victrix, perry's, and lead). I did a small lot for my initial test paint as I decided to see how priming in blue would work. Seems to have turned out okay. I still need to base these guys properly, but I will wait till I have a large block to work on.

These fine gentlemen are from the perry box of french line. They come with 6 out of 42 skirmishing figures as voltiguers. I decided to paint them as legere voltigues (blue pants and different poms/shoulder boards). The dead figs are from a cavalry box I beleive. Don't look too close as one of them is actually a british sculpt (le gasp!).