This is just a collection of random pics I took during the event. Nice looking tables of games I didn't have a chance to play. 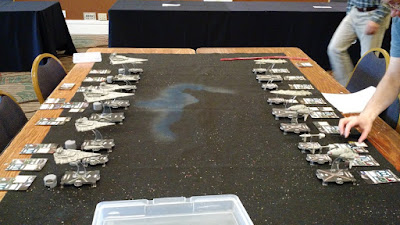 Star wars armada. Looked like a tremendous hairball of small fighters later in the game. 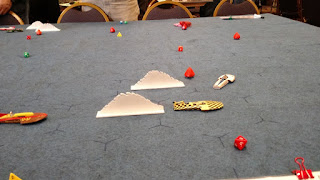 Some fun racing boat game. I think this makes a regular appearance at conventions. 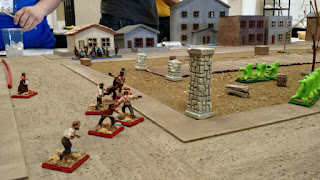 A very cool table top, C and C routered out of a single piece of 8x4 plywood. The apartments fit into recessed grooves. This game was based on "Gangs of New York" and was a straight up fight. I think the rules may have been published in a wargaming magazine at one point. 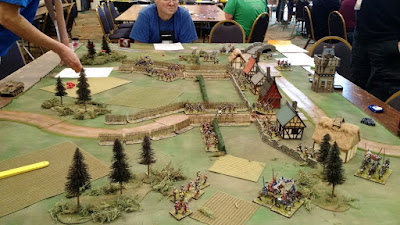 Lion rampant. I failed to get into this game as I had a brain fart about signing up for the 1st period of gaming on Friday. Looked like a fun game was done in a very timely fashion. I look forward to a chance to try these rules out. 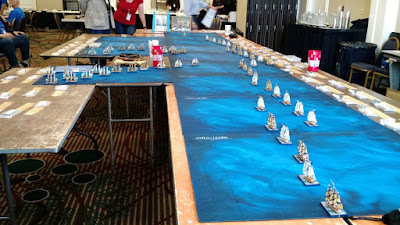 An epic "Sails of Glory" set up for trafalgar. This was played over 2 blocks (~8 hours of gaming). The french eventually managed to capture the Victory and slip some ships off the appropriate side of the table. 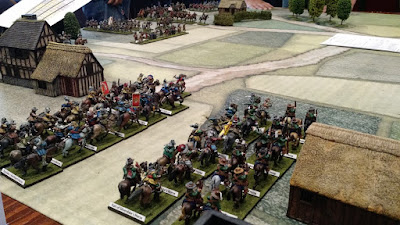 One of numerous English civil war games. The game mat looked great for this one. 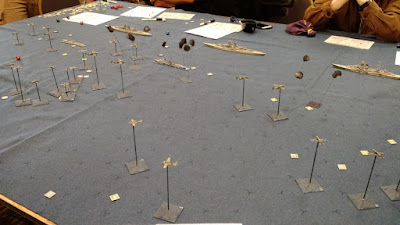 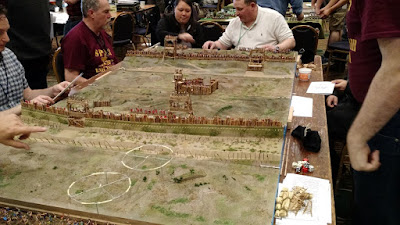 Another fine piece of eye candy. Based on a roman vs Gaul siege. This was early in setup and there were a ton of gauls.....and fast casualties. By the end the board was looking sparse with troops again. 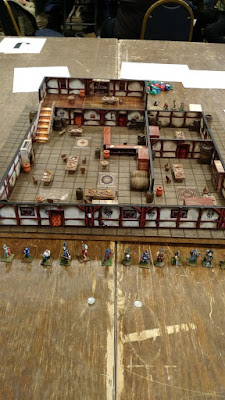 Did a walkby of this one. Gloire maybe? A enviable inn to have a fight in. 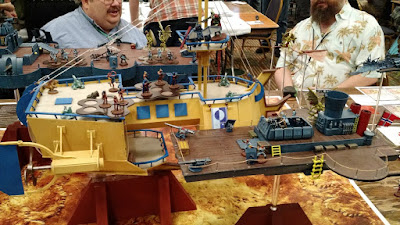 Pulp alley with Space 1889. These are fantastic cloud ships. I was committed to the Borodino game (to be recounted in a future post), otherwise I would have been all over this. 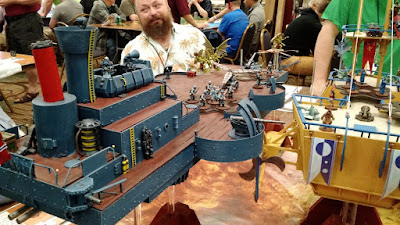 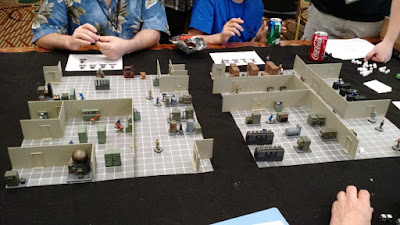 Super spies I believe. I'd guess 7TV, but I suspect it was some other rule set. Lean amount of terrain but it looks really good. 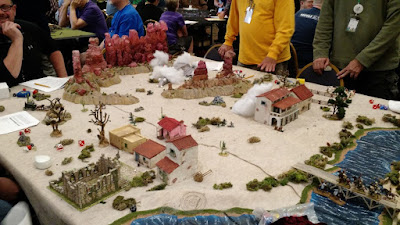 Some sort of cowboys vs aliens (that's a crashed ufo in the smoke). 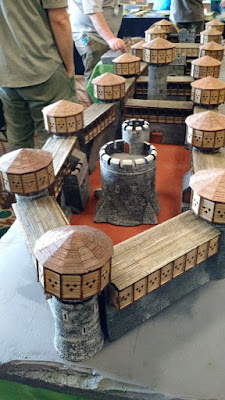 A hudson and allen castle. I've been looking covetously at one of these for a long time. Seeing it in the flesh doesn't really change my mind. Marvelous stuff. The hoardings are an optional piece (actual wood) which I believe (?) can be lifted off.
Posted by daveb at 10:51 PM 4 comments:

Email ThisBlogThis!Share to TwitterShare to FacebookShare to Pinterest
Labels: 2016

Russian to the front.... 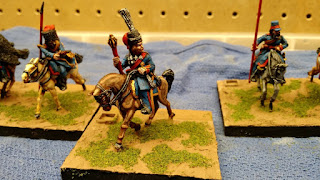 Pardon the terrible pun, but I managed to finish my cossacks literally seconds before stepping out the door to catch a ferry to the enfilade convention.

Doug (Dots of Paint) convinced 6 of us to all paint contigents of troops to help populate his Borodino battle field. After promptly finishing off my first allotment of troops, I went for a stretch goal and added a number of troops including these cossacks. Many have fallen by the wayside, but not these fine fellows. 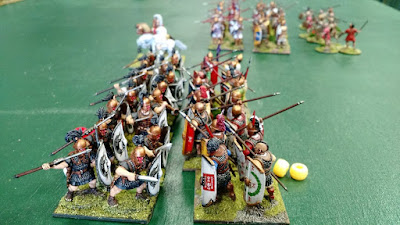 One of the local gamers, Joel, has finished painting up his ancients for Hail Caesar. He invited Nate and myself to play, while he GM'd and familiarized himself with the ruleset. It's quite similar to warmaster and blackpowder with the activations. Units are selected and diced against the commanders leadership. Very good rolls result in multiple moves.

You need to pre-declare your intent, so it's an interesting friction where some troops may fail to activate at all, while others lurch across the table at dizzying speed. 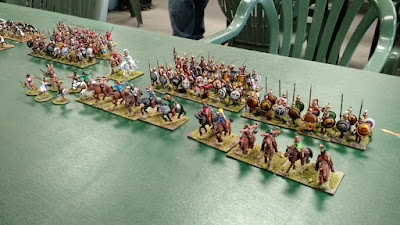 Joel threw down all his painted stuff, in rough parity, Nate grabbed the Romans, and I took the Carthiginians. In the end it turned out I had about a 20% point advantage (up an elephant and a skirmisher) but it was a fun game none the less. Lots of good natured heckling from all three of us.

While the Romans were loaded up with legions (including some convicts), 2 skirmishers and 2 medium cavalry, My own forces had a mix of gaellic (med) cavalry, horse archers, skirmishers, 3 elephants, and a number of blocks of spearmen.
The special rules aren't too common, or overpowering, but do add a certain character to some national units. In particular, the roman pilum rule seemed pretty kickass. 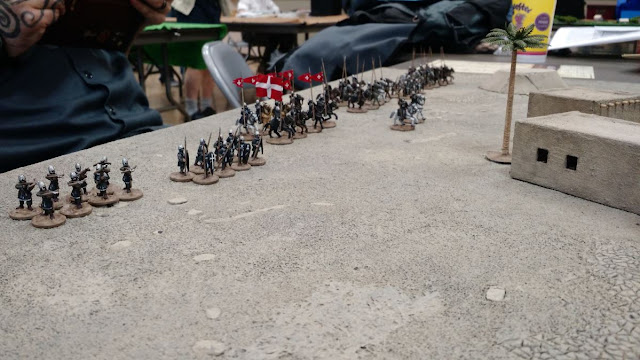 I had a chance to make it over to Vancouver and play with some friends at the monthly Trumpeter gaming night. Cameron (LINK) has been converting a bunch of locals to SAGA over the last two years or so. It started with regular (viking) SAGA, and for a small group of us, we all ordered up 15mm figs for crusader war gaming (Crescent and Cross).

At long last enough of us have painted figs and the opportunity to throw down some lead on the table. I had never played, Grace has played a few times, and Cameron knows the rules. We did a two vs 1+1 battle. I suspect we had the advantage due to the number of saga (activation essentially) dice we got to throw as two individuals rather than one. 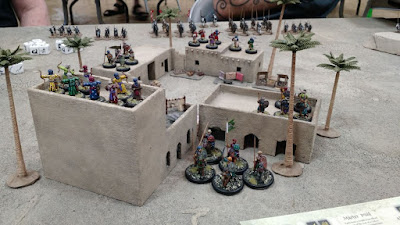 The mission was a last stand, after bidding to see how long we thought it'd take us to table our enemy using endless reinforcements we had chosen the same number. Cameron won the dice off, and it was a typical crusader murder fest against the indigenous peoples of the levant.