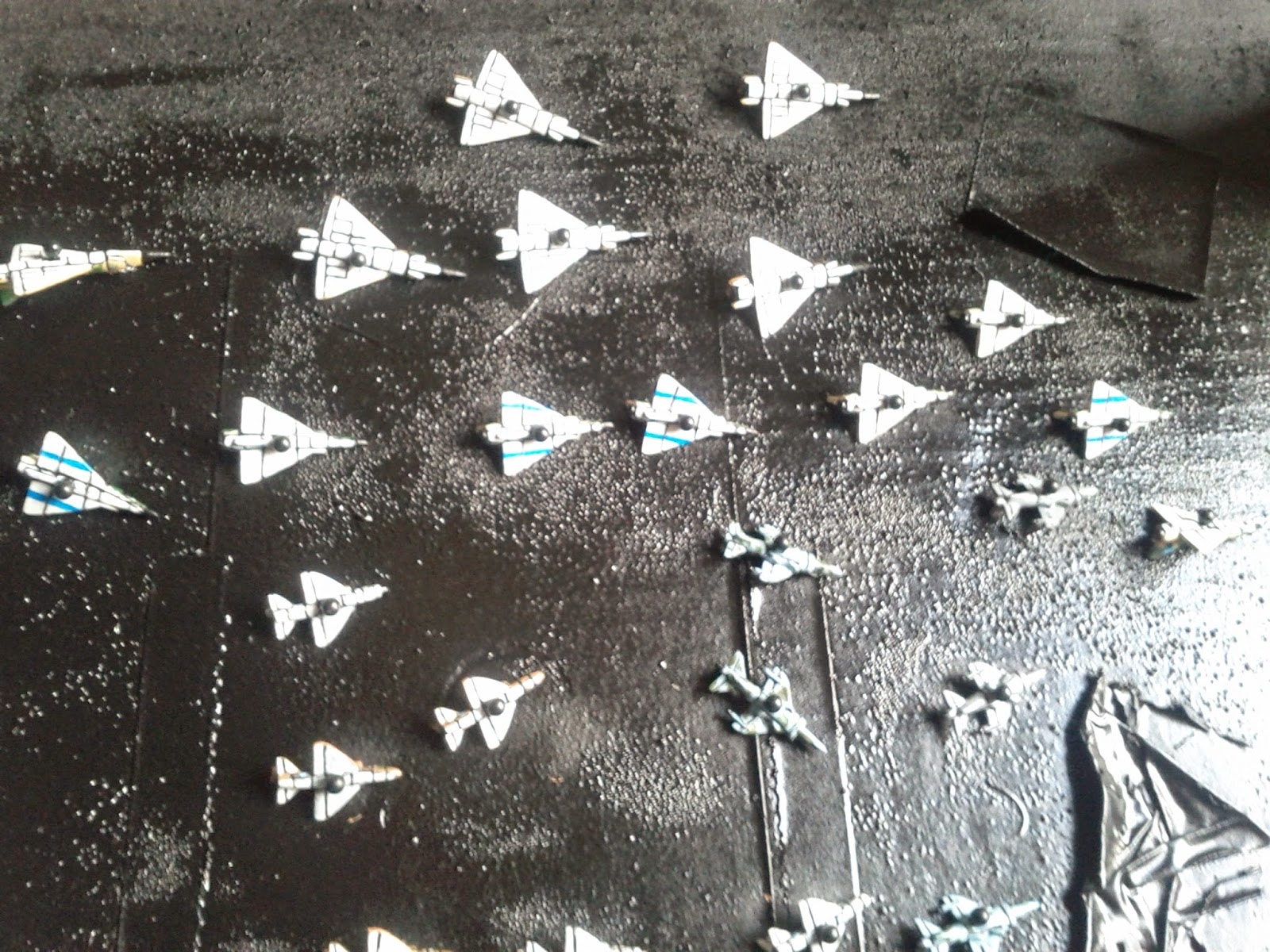 I've been trolling through my photo archives, which I tend to separate by month and year and was trying to figure out how much I've actually painted this year. Funnily enough, I didn't take pictures of a lot of what I worked on (which is unusual), but I do find hints of what I was working and interested in at various times in the year. 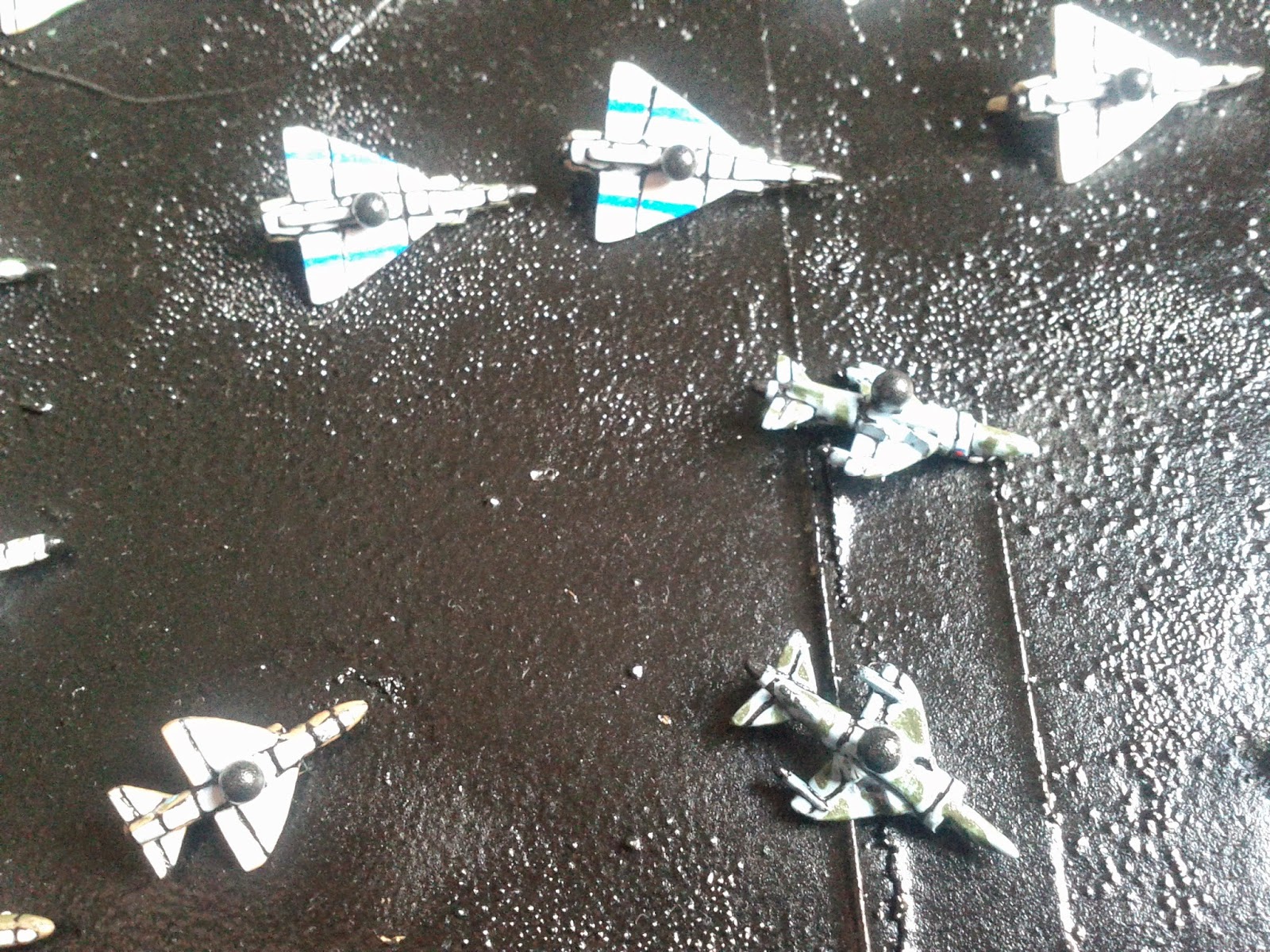 Beginning of last year I had just finished up a batch of jets for check your six! (CY6!). I chose to do the falklands war purely based on the limited number of planes needed, and the couple of scenarios available. After hunting for various pics of 'correct' paint jobs, and getting confused (as there was changes through the quite short war), I painted up these fellows.


These are all 1:600 tumbling dice figures. They include harriers, mirage 3's, 14 skyhawk, and IAI daggers (which are almost indistinguishable from the mirages...and I think they are perhaps an earlier model). 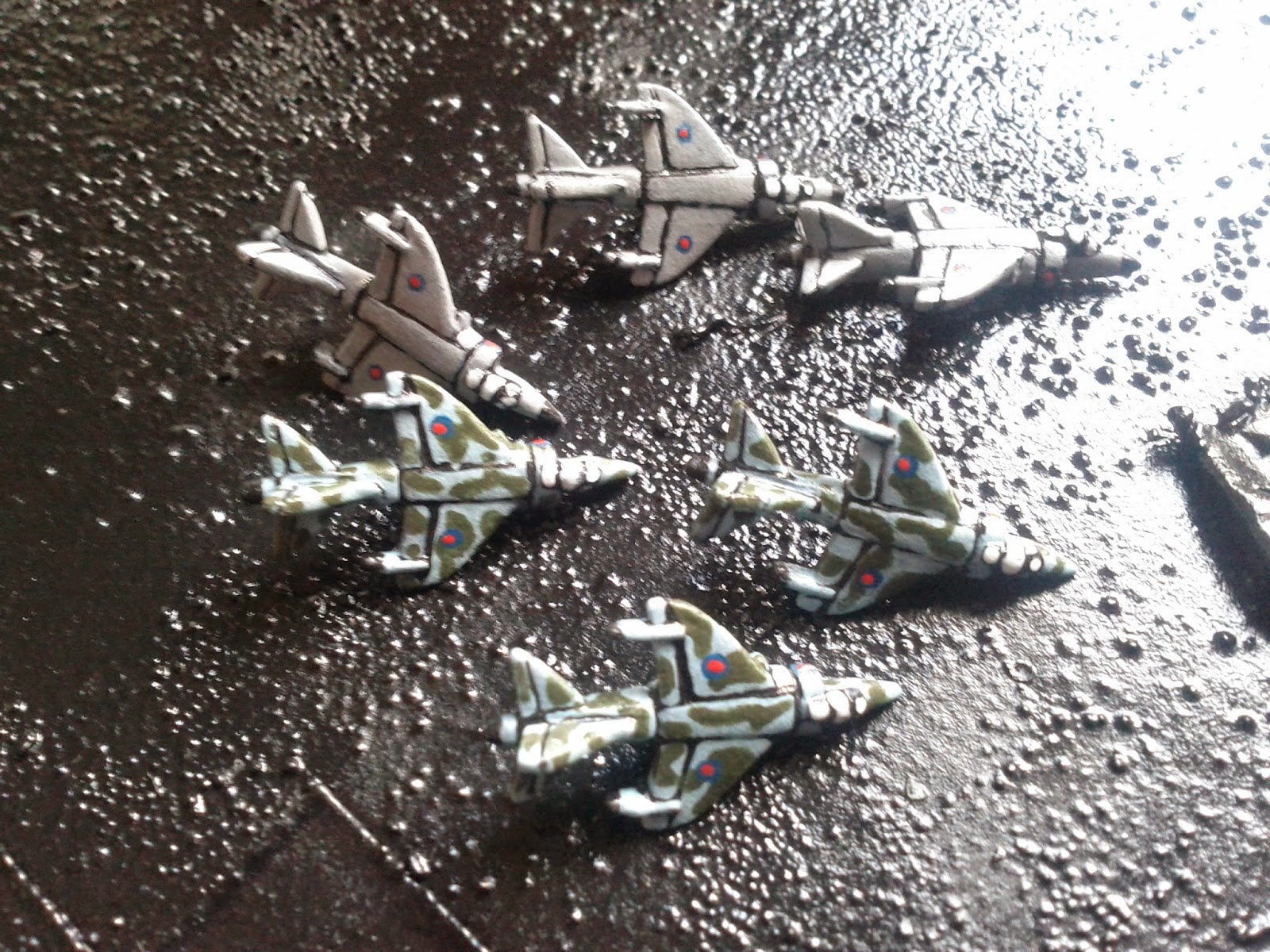 Harriers in the two group colorations. They are noticeably smaller than most of the opposition. 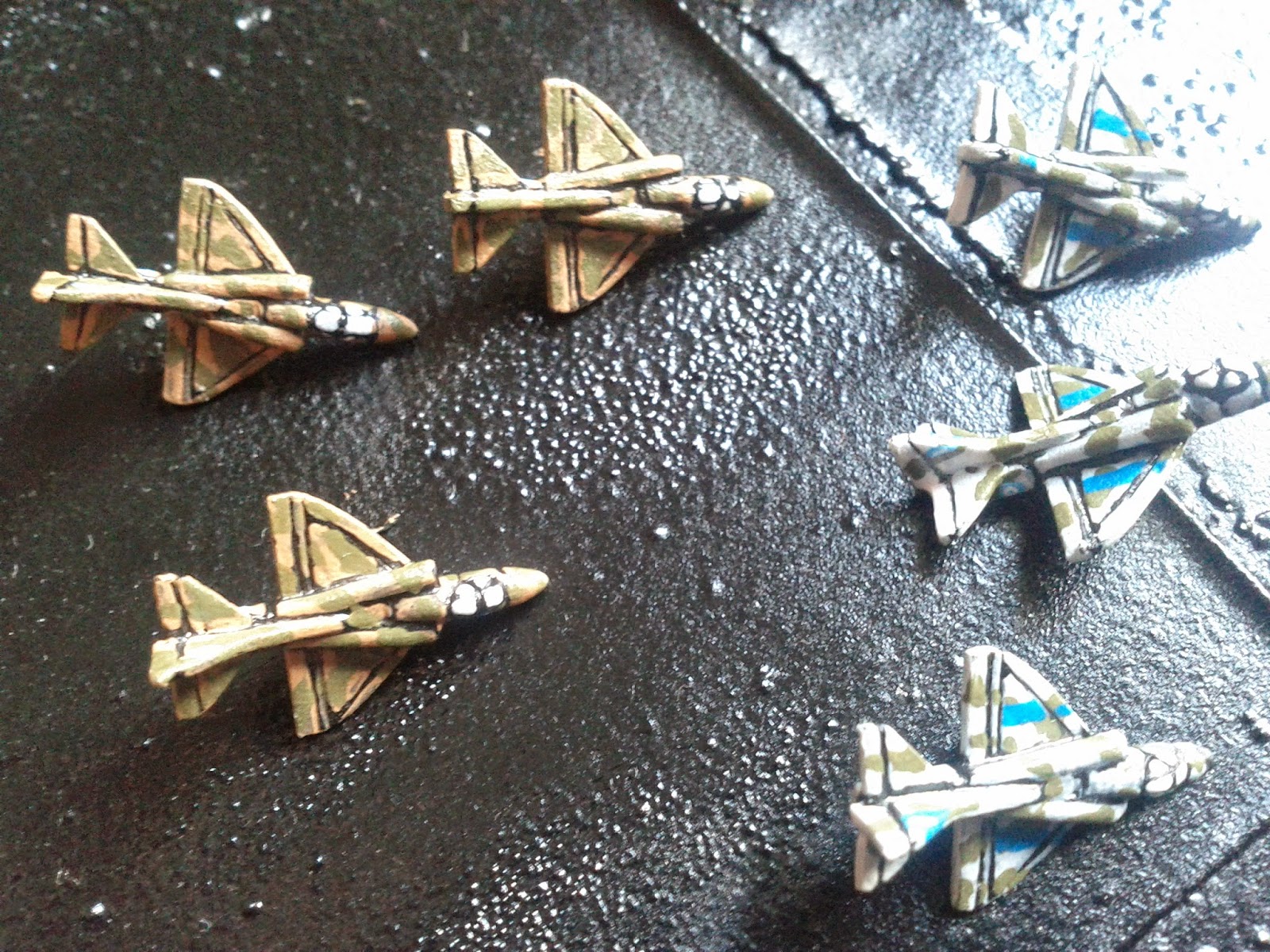 A4 skyhawks which are wee little planes compared to the mirage's and daggers. 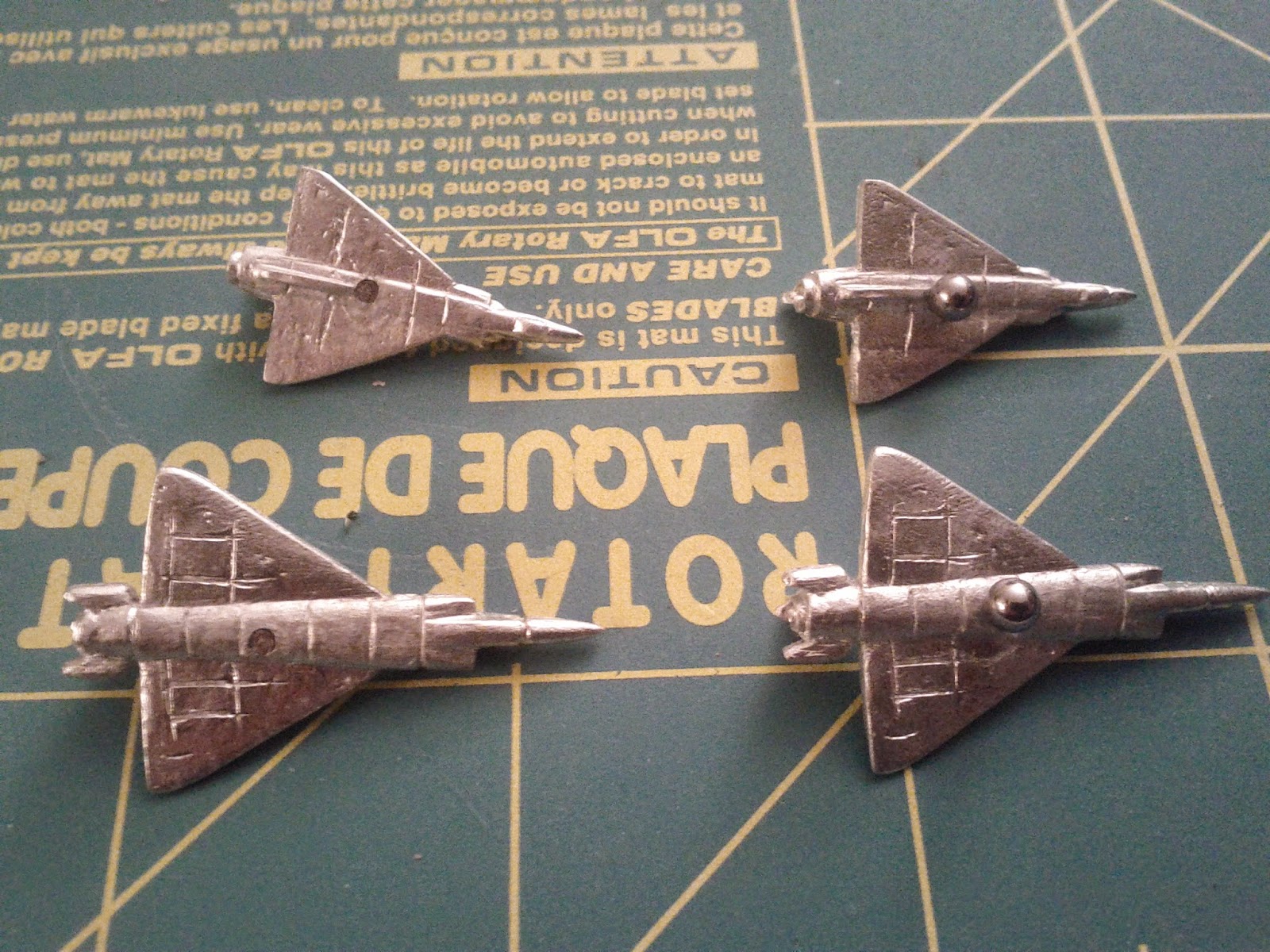 Despite finishing these in Jan/Feb I haven't gotten around to playing yet. I have sourced a hex mat, but I'm still facing sound challenges with how I want to do the bases.

Ideally they will change height, and show the speed on them. The planes have a small ball bearing located on the bottom in order to pitch/roll/yaw on the magnet on the stand. 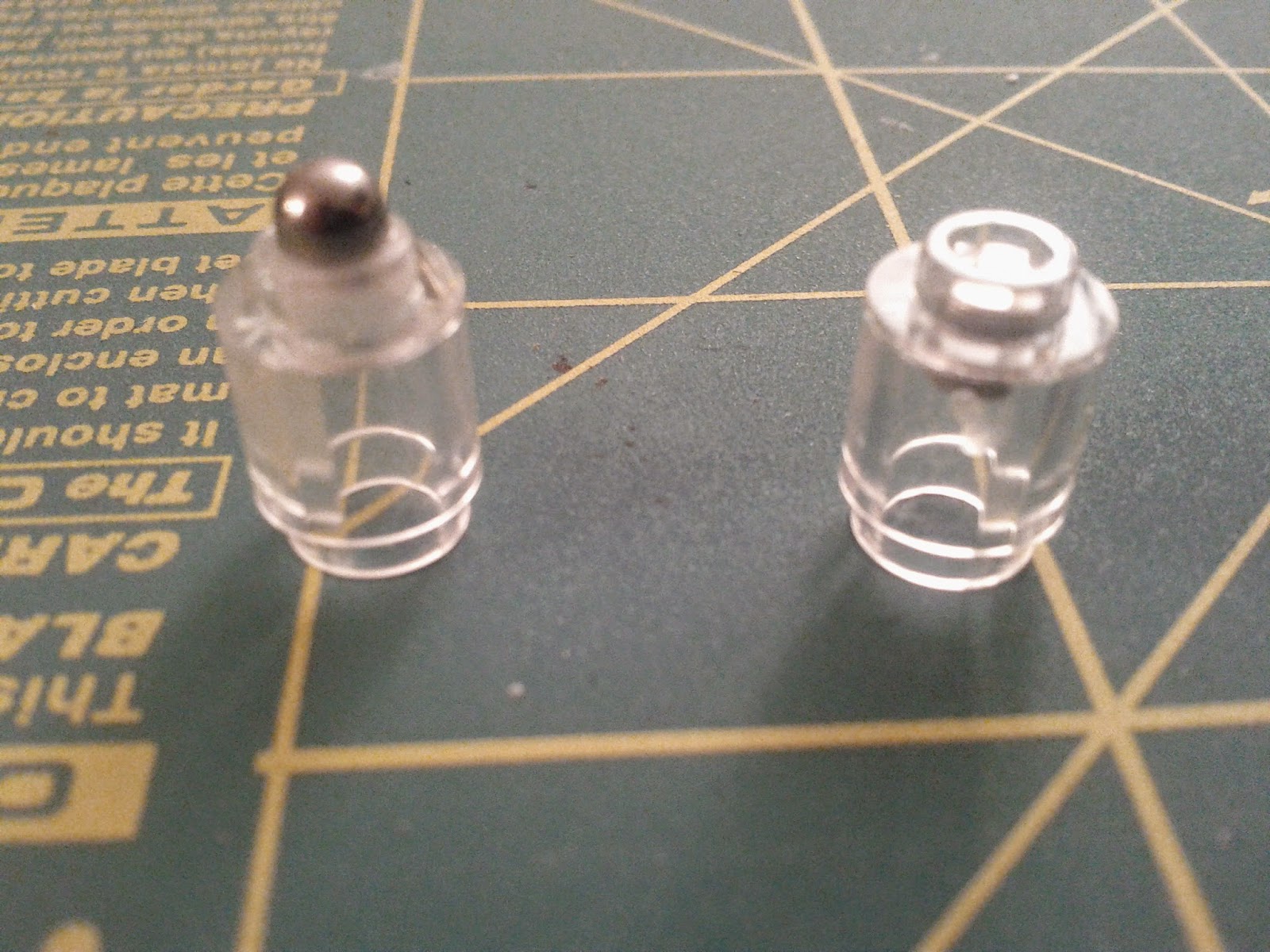 I originally toyed with the idea of having the ball bearing on the stem, and only placing a magnet inside the plan. The end result was wildly unstable and the nose or tail (depending on where I placed the magnet) would instantly track downwards. I then managed to embed some magnets within the base stem, and attached the ballbearing to the plane. This is improved....but they still yaw a bit too easy. I may just stick some 'blue stuff' inside the stem to increase the friction.  I'm hoping the whole basing scheme isn't kaput. 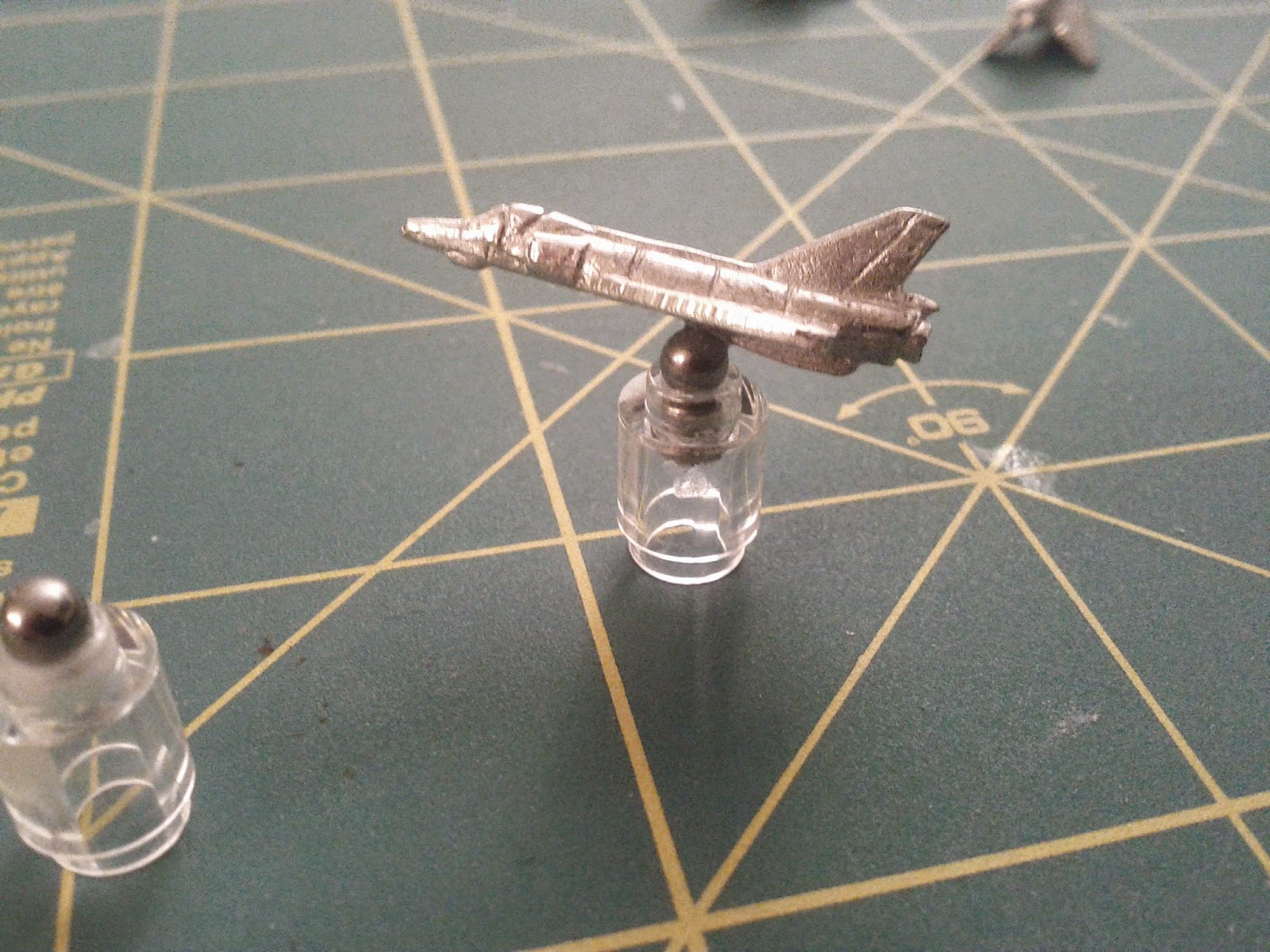 Meanwhile, I still need to decide how to represent plane speed. A dice and frame arrangement vs a arrow/dial/pointer thing. Decisions, decisions.....

I'm going to wait till I'm more inspired to fight with these problems. 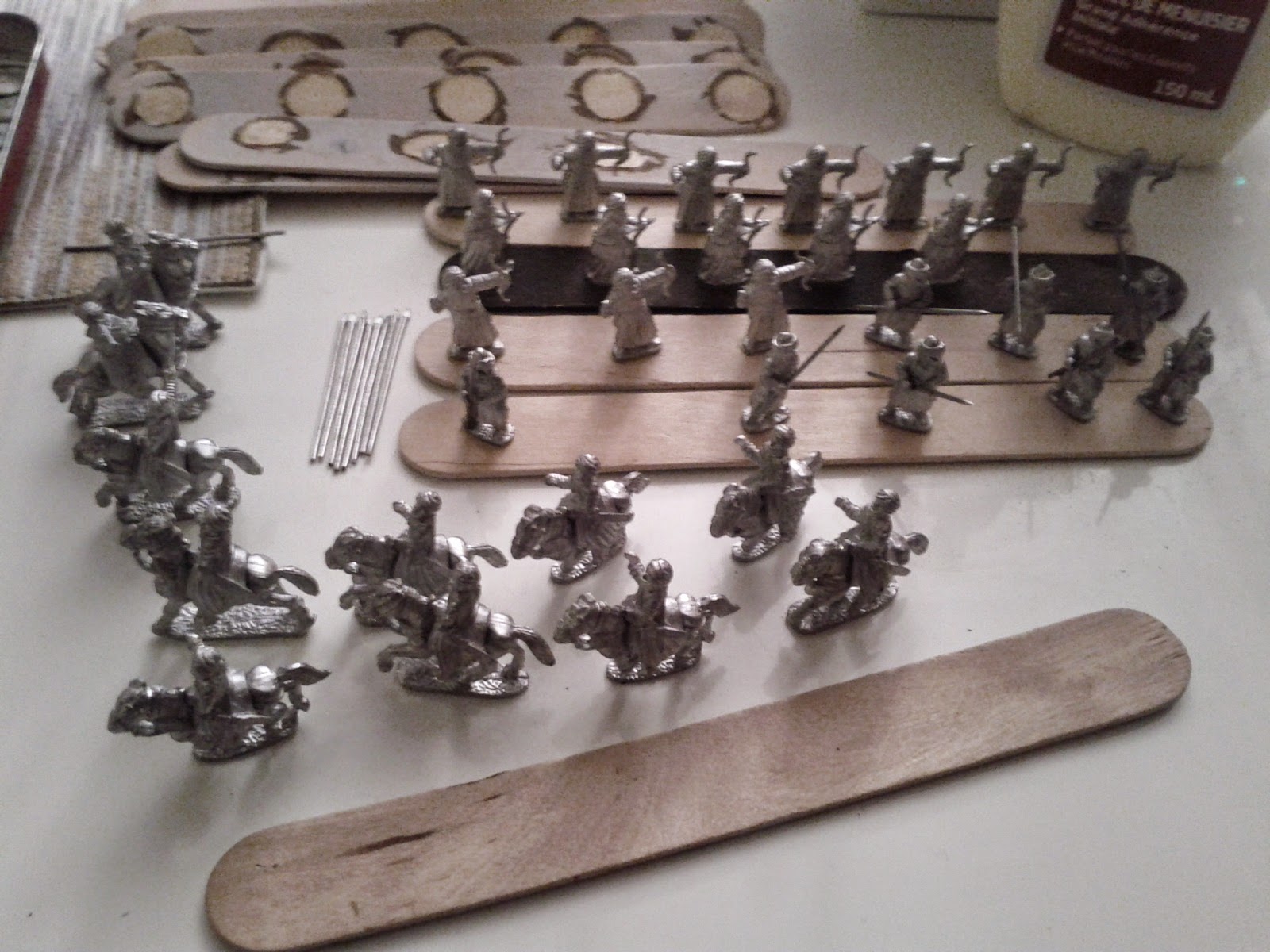 These actually arrived last week, but I didn't get around to working on them till this week. This is the first set of figs I bought since the challenge started (16 weeks ago!). There was a sale on and a few of my friends are starting Saga Crescent and Cross. It set me back about 40$ with shipping, which I figure is the cost of a box of plastic for many games so I'm going to call this one wild card.

I went with a variety of arab/bedoin flowing robes with head coverings. Basically every melee fig is armed with a spear, which I thought was a bit annoying, but I couldn't do much about it. The casting are actually quite nice, though they are noticeably beefier than some other manufacturers (including Khurasan).

The spears are actually sharpened steel spikes on the foot troopers (lead on the cavalry), which is pretty fantastic, but they've been driving me nuts trying to glue them. One of my friends suggested CA glue accelerator, which I'll probably have to try, as using blue tac to hold the spear while it sets didn't work out so hot (lots of scraping to remove).

Christmas, of course, is taking up much of the free time, so overall not a lot was accomplished this week, and probably even less for the following week.

I have 16 bowmen, 16 spear in robes, 8 spear in chainmail, and 11 cavalry. Hopefully I can bang these guys out quickly so 1/. I can get some games in and 2/. so I don't set back the lead mountain reduction project by much. 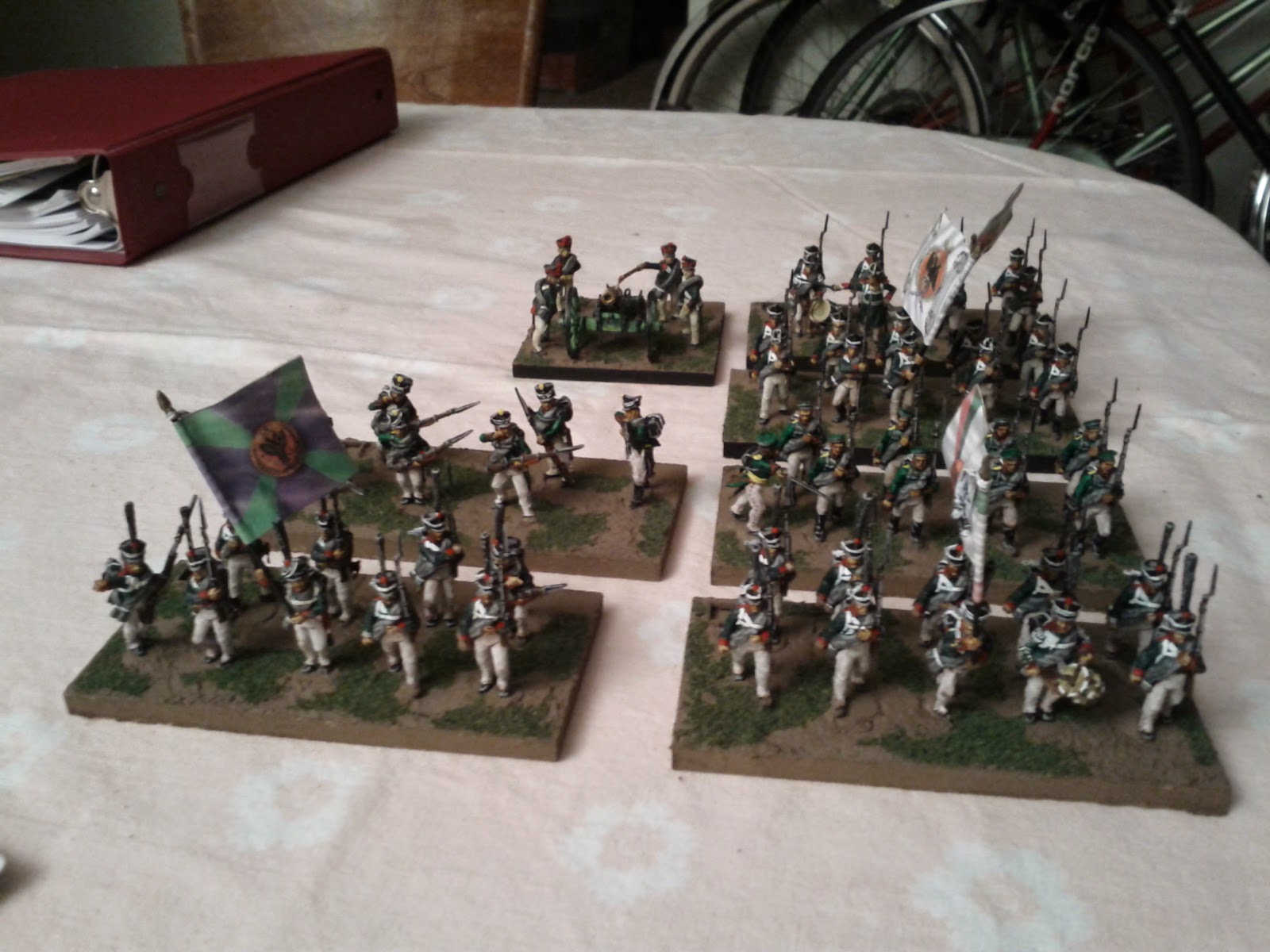 I'm late with the posting, as this is actually the start of week 16, but I wanted to finish the last few steps this earlier this evening so I wouldn't stretch these guys out another week. I'm finally completed all the Russian infantry figs I received right before starting the challenge. Considering October was completely taken up by zombies, that means it took about 10 weeks to finish. Pretty bad actually, although I was distracted by various other items and a second job (taking me over full time). 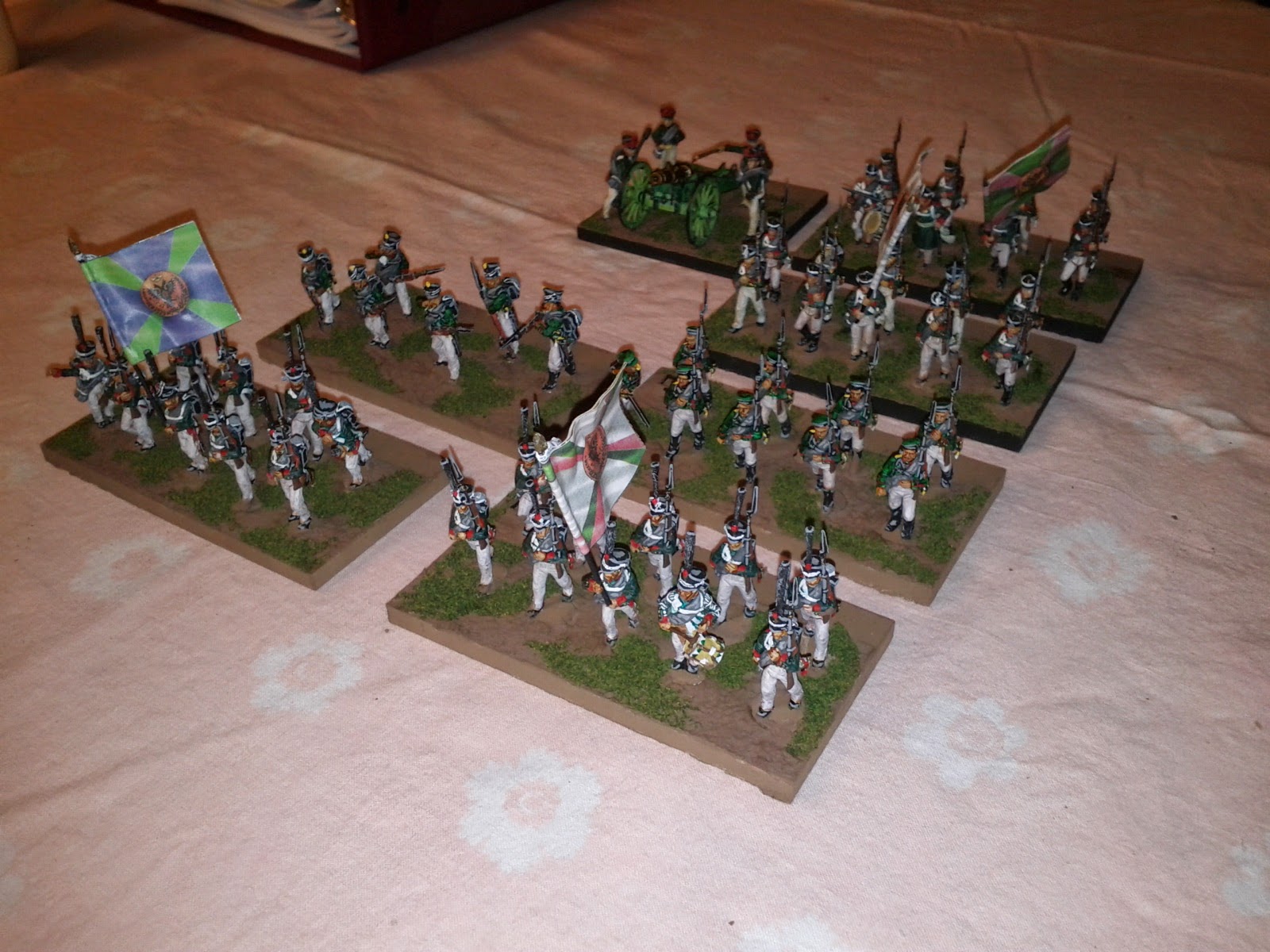 I noticed as I was laying these guys out to photograph them with the earlier figs that I went through the effort of painting the edge brown when I'm supposed to paint it black. DOH! Wasted paint AND time. Such weak-sauce.

These are the contents of 1 box of plastic russians, 1 artillery pack (licorne), and 2 metals packs (jaegers skirmishing & grenadier command advancing).

I still need to paint up some command figs for these guys, but it's nice to be mostly done. 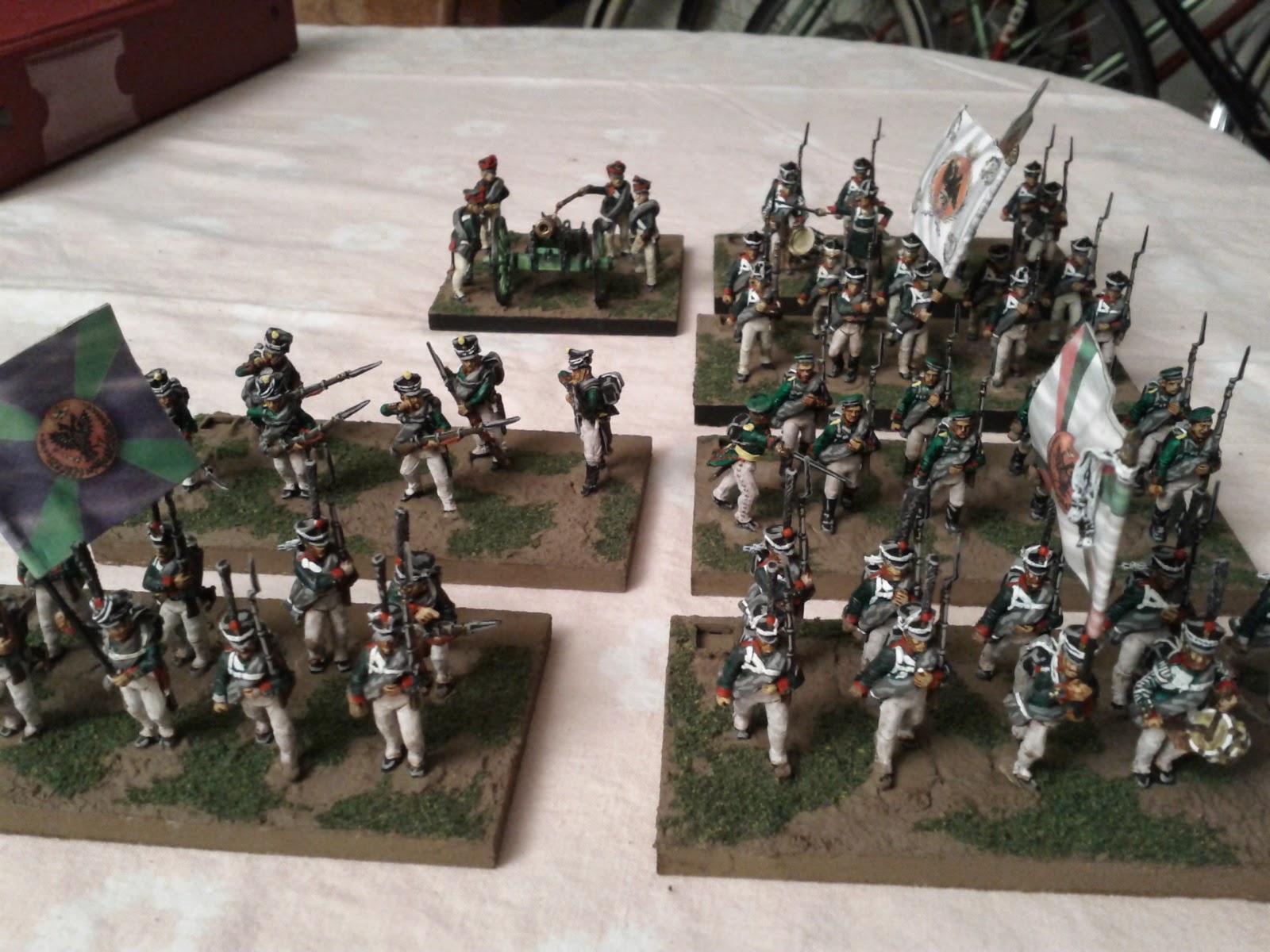 A bit of background here....Doug from Dots of Paint blog, convinced a number of us to all paint Russians to set up for a big borodino game. He posted the OOB broken down into the required bases. I took Tuchkov's 3rd corp, which only requires 2 grenadier, 1 line, 1 jaeger, and 1 artillery. I've overshot by 1 line and 1 jaeger. If I can finish my cavalry requirements in a prompt fashion, and the other members aren't overally productive, I may claim another corp to work on. 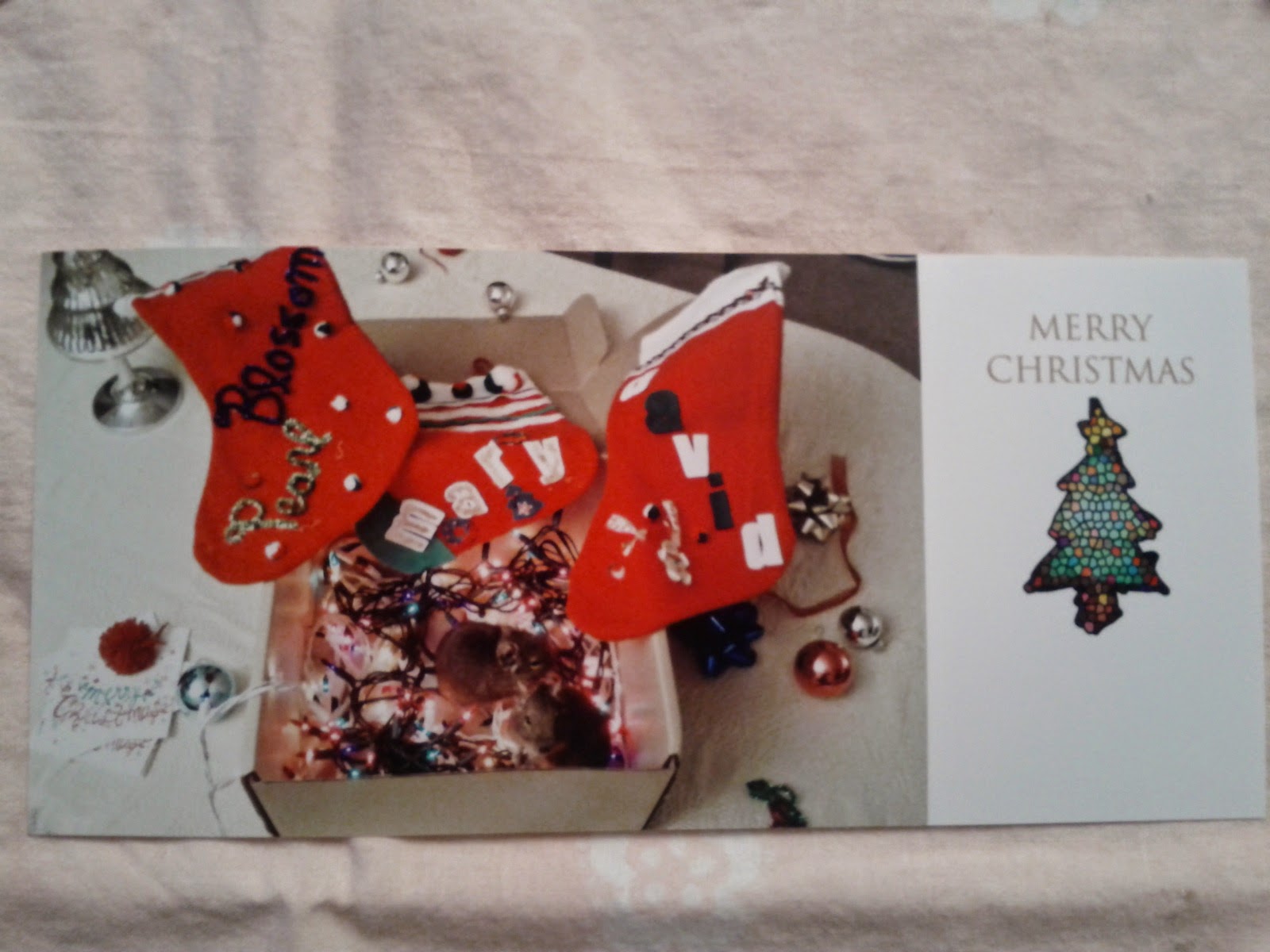 Of course, there is the reduced hobby activity related to the holidays. At least a few nights have been taken up with decorating, having a party, and christmas cards.

My wife has some degu's as pets (they are dessert rodents from South America). She makes clever holiday pictures to print on the cards and send out. Considering these beasties chew everything and can't tolerate sugar (being naturally diabetic) it's actually quite tricky to pull off. I have been drafted (willingly) to assist for the last two years.

Hope you are all having a good (and productive) holiday season. 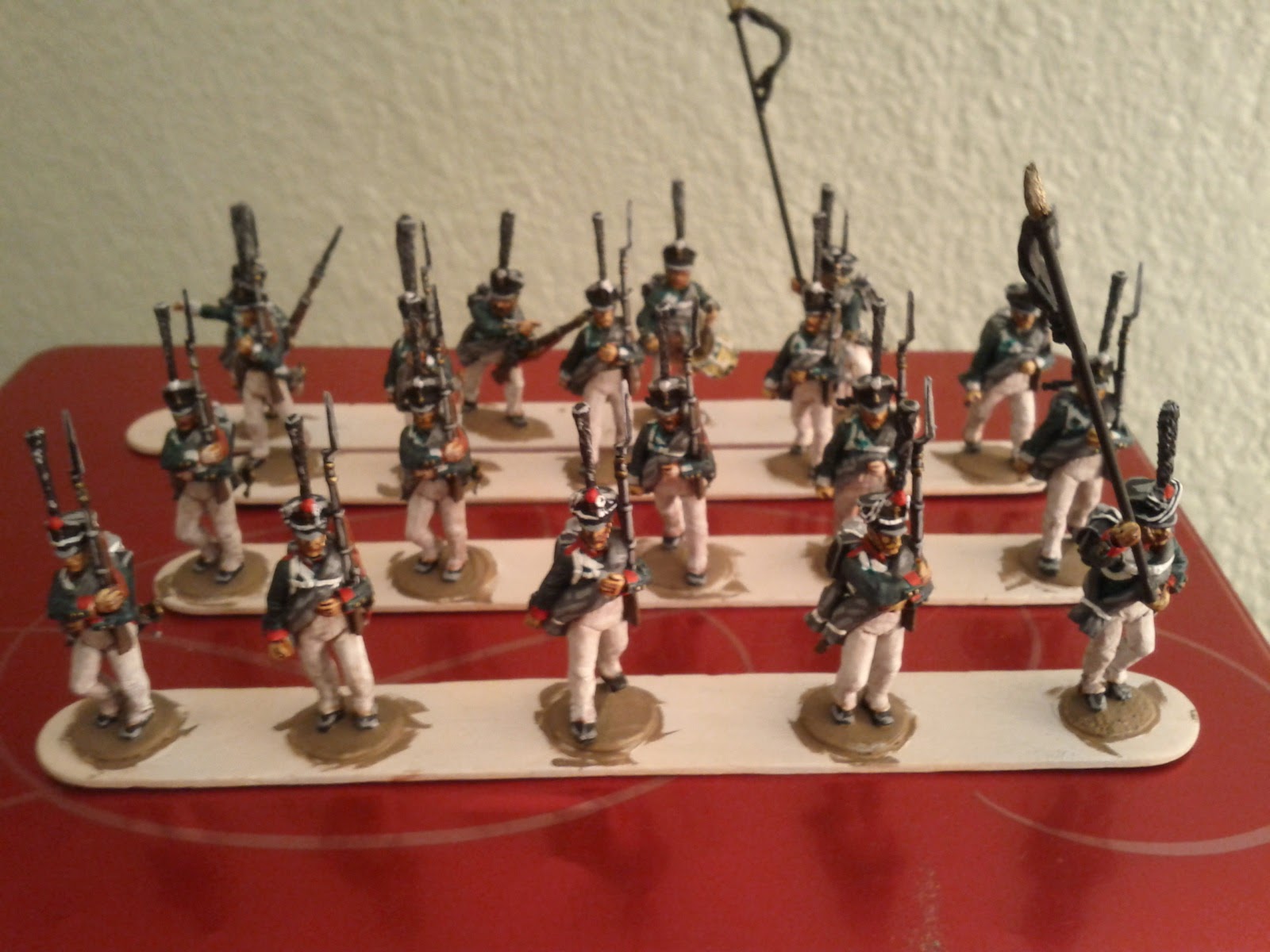 Lest anyone be mistaken that I was extra productive this week, I'll admit that these guys were probably half done prior to zombtober, and I just recently picked them up having finished the jaegers. The first post of December is quite exciting as it marks the beginning of the second half of the 6MMRPC challenge. Only 3 months until I can start buying things again and undue all my hard work. Oh joy. 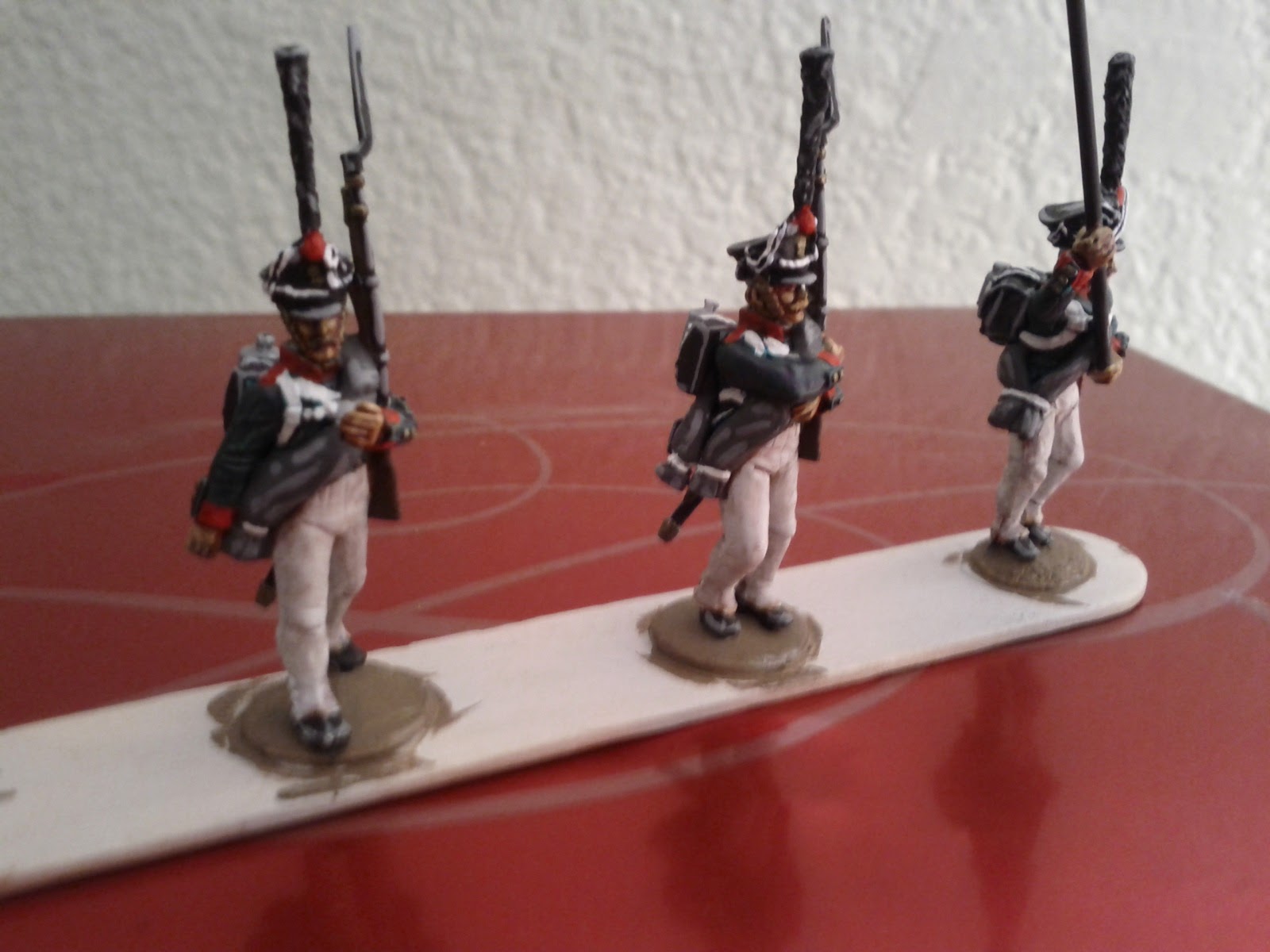 Back to the figs, theses are (again) perry plastics. The box can be set up to make jaegers, fusilier, or grenadier (the only differences are the hats and some subtle colour changes). I also have a few leads in here (also Perry). The grenadier command pack I wanted to use to try and add some extra variety into my stands. The clue to recognizing them is that they don't have the musket parked on their shoulder. 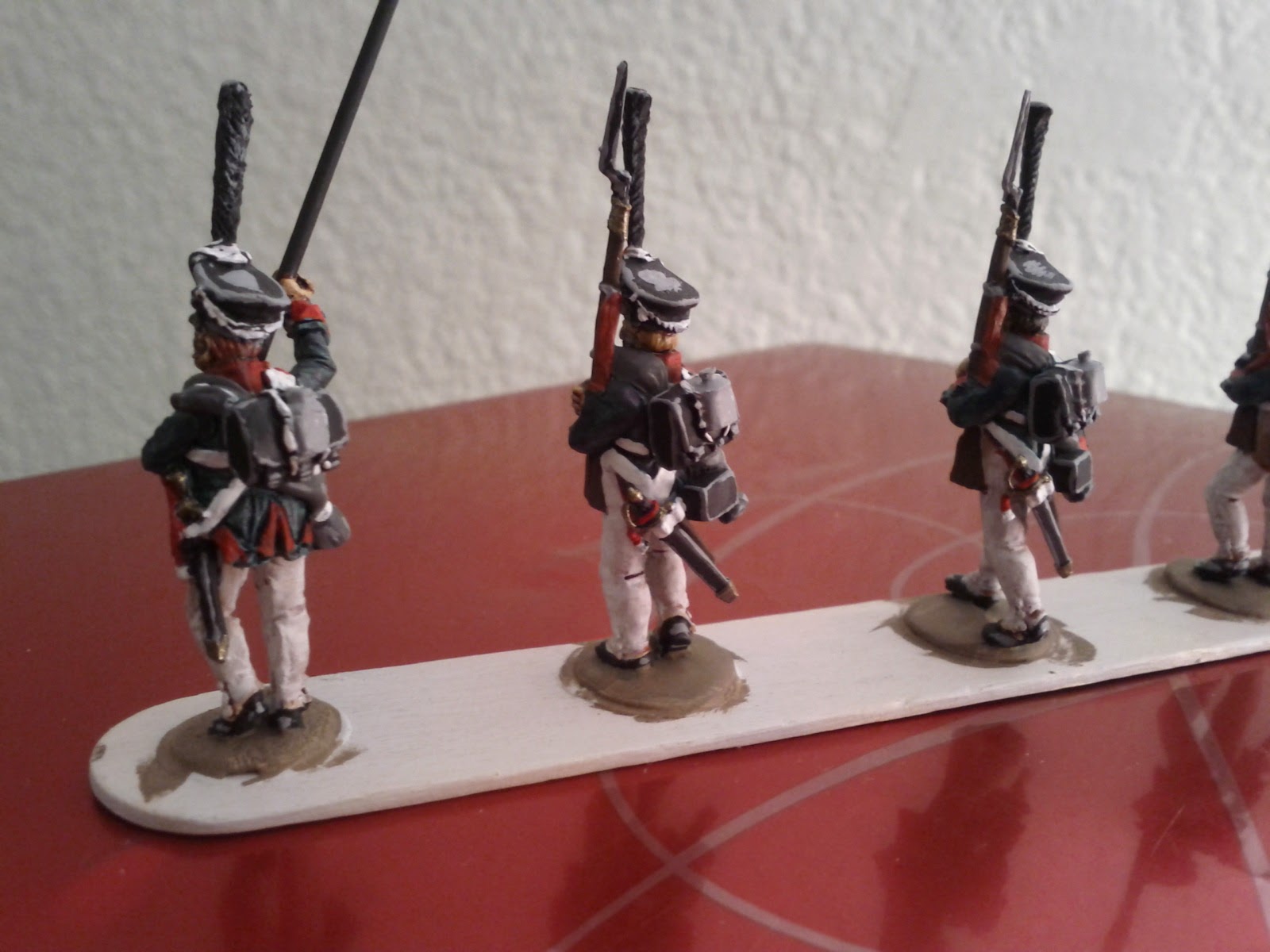 I think the jaegers I finished last week are slightly better done (as they are, functionally, the last set I painted fully from beginning to end), and I like the extra variety in hats and poses they had (and the sharp looking yellow). I haven't done much looking at the Russians, and maybe I'm missing out on all sorts of facing (collar/cuff) colours I could be using, but it seems to me the French have better variety.

Nice photo to the right showing some of the red turnbacks. Most of the fig poses you can't even see them. 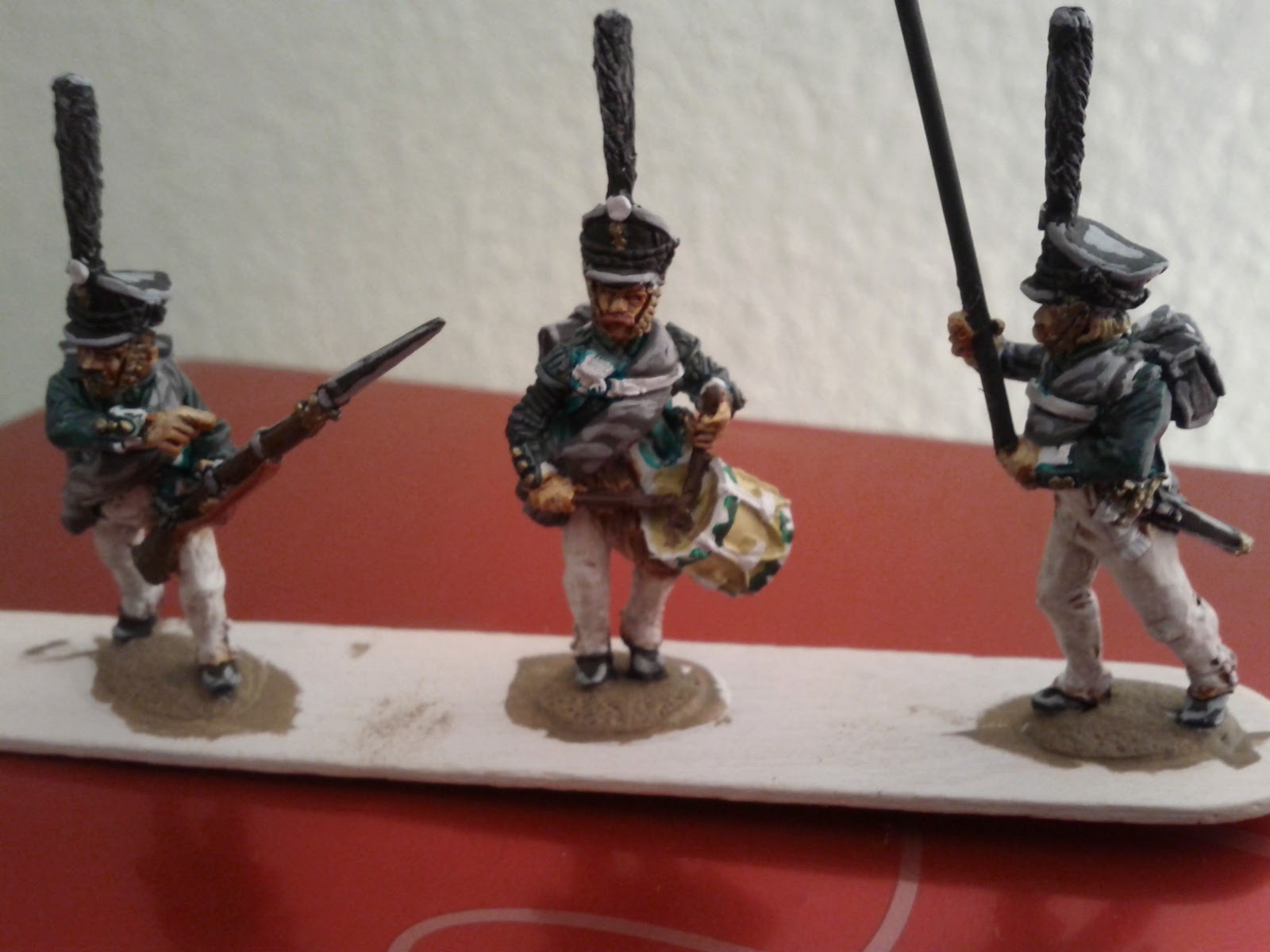 I like the start of the drummers saw tooth pattern on the drum edge. This will be cleaned up when I paint with some white. 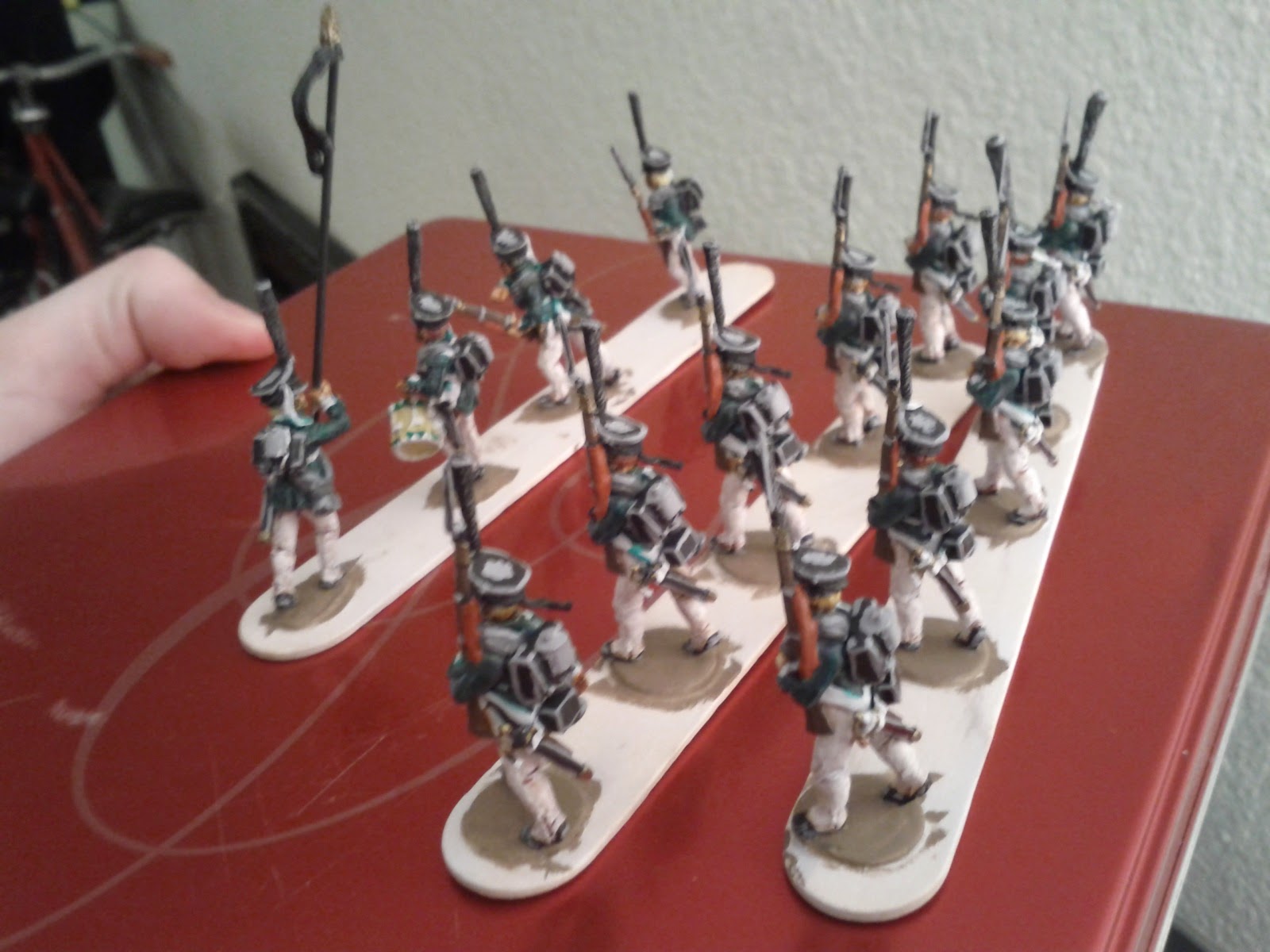 One stick is fully completed. The other three still have the red and white to do, which is what finally makes them pop. It's amazing what final touches of colour can do for figs.
Posted by daveb at 9:40 PM 4 comments: