Age Of Reason AAR - The crossroads

I'm hunting for a 'lace wars' era rule set that I like enough to play regularly. One of the local gamers handed me a big box of unpainted lead (15mm scale isn't something he wants anymore) for the era. I'm planning on painting up an 'imagi-nation', but basing and unit sizes somewhat depend on rules so....the hunt is on.


My erstwhile opponent, Tommy, came into a large lot of prussians based and painted for Age of Reason. It seemed to be the most simple approach to try these rules first. We chose a relatively small set of matched forces (4 units infantry (inc 1 grenadier), 2 units can (light and med), and 2 cannon). Consulting Charles Grants 'Programmed Wargame Scenarios' we found that we were advance guards coming from the East/West trying to seize the cross roads. Tommy was meant to form a line of battle North/South at the crossroads. I was meant to 'seize the heights' which involved marching past to the South West and occupying the hills. Obviously these were incompatible plans so things got bloody. 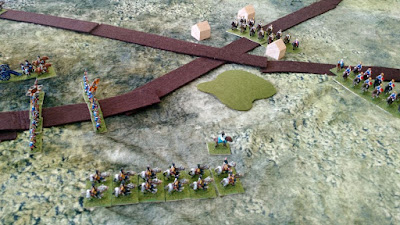 I find it interesting when rules do cause 'historical' engagements. We had lots of failure of nerves to actually close into melee. Our cavalry clashed early/first and each side had a unit run off the table (dragoons beating hussars in both cases). It was actually more effective for grenadiers to advance to musketry range and blaze away at a lesser unit than (fail to) charge in.


Some mistakes were made. The artillery was overly effective for the first couple salvos (1/2 of an infantry unit disappeared in a pink mist at one point).
The cavalry also tested their ability to close to combat incorrectly early, so there probably would have been even fast clashes at the beginning. 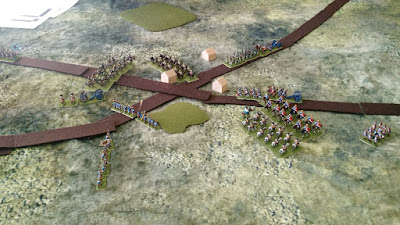 We played for 3 hours before running out of time. I suspect we were pretty close to a decision. Tests to withdraw were being made (although currently at a 12 on 2 dice). More importantly a lot of units were worn and likely to leave with a few more casualties. 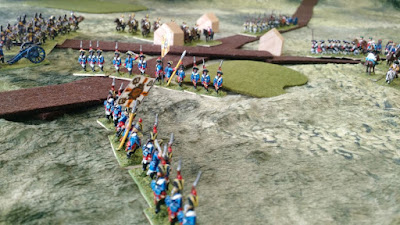 I'd be willing to give these rules another go, having gotten up to speed on them. Our plan is to try the same forces/scenario with a different ruleset next month for comparison. 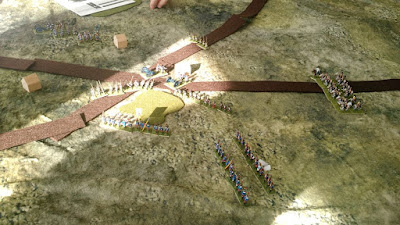 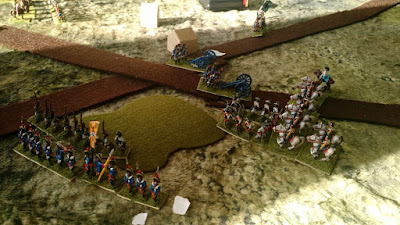