This continues from part 1. 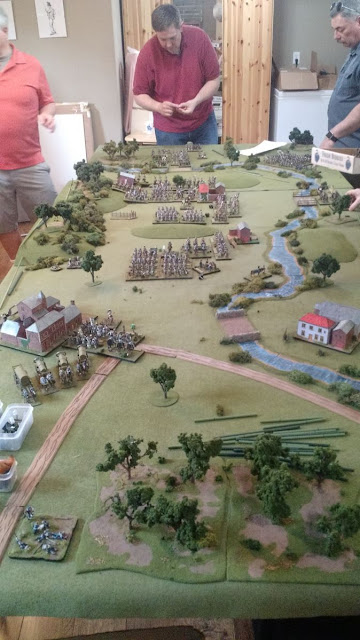 The french, under attack by a massive coalition force, start falling back East to a second line of defence. Gazan acts as a rear guard (part 1), while D'Erlon contests a river crossing in the North and sets up the fallback defense. Joseph Bonaparte parties and ignores what's happening. Rielle, cognizant of the multiple crossings threatening the main line of supply (and retreat!) retrogrades to try and hold these crossings (currently unthreatened) and screen the baggage train with the King.

In our picture to the right we can see the main line of supply to the bottom right. An alternative line extends down left (which penalizes the French should they withdraw along it). At the crossroads is the baggage train, Josephs troops, and the party house.

Due North/Right of the Royal party is the first crossing and village that Rielle is concerned about (a second line exists down the main supply right [off picture bottom right]). Rielle can be seen as the first mass of troops roughly in the centre. 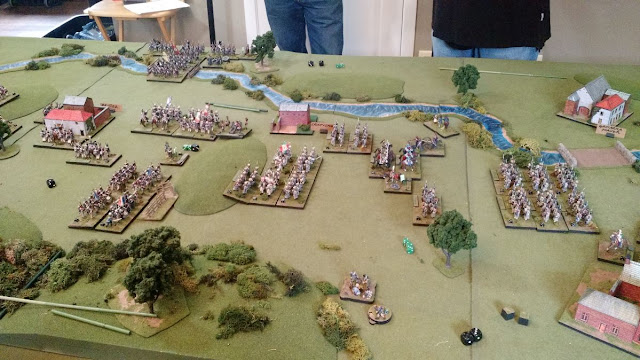 Rielle is a bit challenged with his available command points and large command, so about half surge East (to the right) to get the crossing asap. Of note, his one artillery piece starts advancing towards the crook of the river to cover the village and bridge. This will prove crucial later. The troops Rielle is too busy to move end up standing around for a long period of the battle and, indeed, will become useful later. 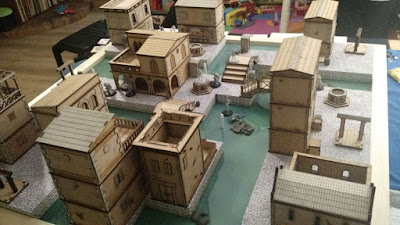 One of the local gamers, Garret, back the Carnevale Kickstarter. In the lead up to getting his goodies he industriously prepared a water table with clever magnetic cobble stoned blocks for a great looking modular table. Part of his goodies included Venetian inspired laser cut mdf from ttcombat with some sort of matboard detailing. 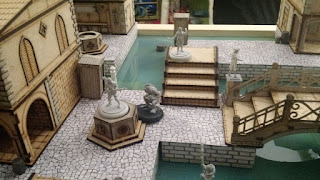 I ended up getting to see the whole effect this week when he invited me over to be the opposing player in his first game. We skipped the 'learn how to play' scenarios which are super basic (scenario 1: learn to move!) and jumped into a scenario where we both want to grab a token in the middle. Gangs start *VERY* close so the mayhem kicked in right away. 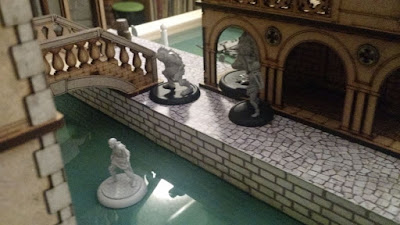 I played some fishmen/Cthulhu-esque gangers with slaves that my fishmen can eat to heal. Garret played some sailor/gondolier plus angry townsfolk.  Gangs seem to run 6 to 10 figs, and have a fun specific style (there are 4 factions). The rules have some specific actions that seem thematic with rules for aquatic movement (i.e. most people are bad at it but the fishmen do it well), drowning (something you typically try and do to others), grappling (which does no damage [except for falls!] but allow you to toss your enemies into bad spots), and jumping (possibly you move too fast, but it's fun to hop off railings, mooring poles, and up buildings like some sort of anime character). 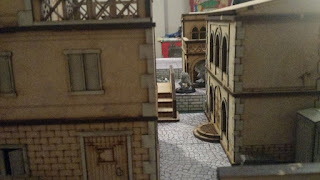 Ranged combat is pretty limited and there are some spells as well. There are some consumable traits (will and command) which allow you to boost rolls at a critical time. You end up with close ranged mayhem and some tough decisions about order of moves and where to stand (models are not allowed to move through each other, friend OR foe). 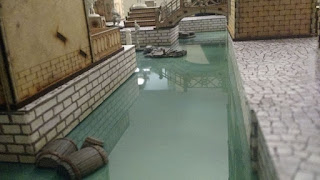 One of the funnest part was a massive card deck of 'agenda cards'. These gave you strange objectives to achieve (attempt to drown 3 different models, kill the enemy leader, jump at least X inches with 1 model using 3 actions in 1 turn, etc). When you do so you gain victory points and a new card. It can result in you engaging in strange or sub-optimal tactical behaviour in order to set up an agenda to benefit your chances of winning the victory point game. 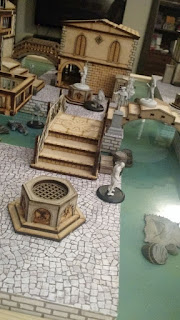 We'll be taking the rules out for another spin sometime (we are both pretty busy and don't get to wargame much) to rectify some of our mistakes and try out the 2 factions we didn't play this time.

The annual GdC game dropped in Vancouver recently and I was again fortunate enough to attend. Doug (dots of paint blog) hosted a great looking game with multiple commands for the gamers who traveled as far as Portland to attend. Due to some late drop outs the under studies needed to take over, so the role of "Spanish, British, and Portugese" will be played by "Prussians and Russians". As traditional, Doug set up a historical battle, left some details in the dark, and watched to see how closely to history we would, or would not, end up. 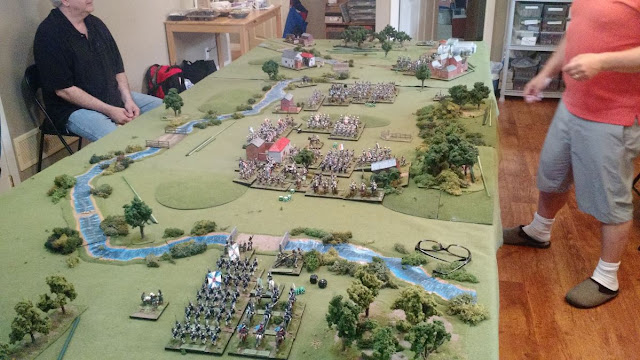 Vitoria sees a large collection of French hiding behind a hook of a river turn. Joseph Bonaparte, monarch of Spain (imposed) fails to offer much in the way of direction until the army starts collapsing, and only then will begin to withdraw his baggage train of valuable. Massive guerilla activity means the Allies don't have a clue where the hammer is about to fall, so the french (myself and Kevin) end up setting up blind.

In the picture above, we see North is to the left. In the bottom we have Cole/Colesky ready to cross the river against Gazan. Behind Gazan is D'Erlonfacing a northern crossing. Further in the distance is Rielle (positioned between two other crossings), and furthest is Joseph....too busy partying in the Royal way to do anything until a corp fails a morale check.