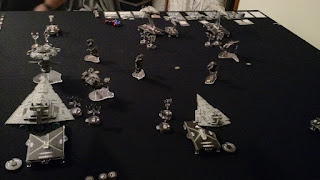 I've managed to locate another war gamer locally. A great find of high caliber: he has both sides of numerous games....painted! We met up for a first game of Star Wars armada. I randomly drew the imperials (secretly I was hoping to play the star destroyers).


There's an interesting mission selection mechanic where each player builds three options into their list. The dice off for initiative determines which players choices get used. Having no idea what we were doing we random selected a mission which ended up with the imperials getting to hyperspace jump in one smaller ship and 3 groups of fighters into the middle of the board later in the game. 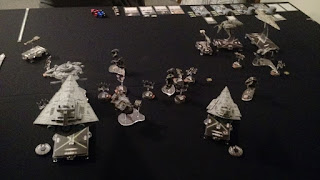 This game seems to theme, and reward, the player who can predict what till be happening/needed in the future.

There are 4 types of commands you order up (roughly damage control, shoot more/better, change speed/turn harder, get more fightyness from your fighters). The big/slow ships have to queue up their orders up to 3 turns in advance. 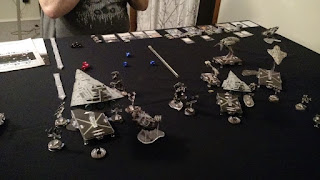 Firing happens before movement, so you remove a crutch most players don't realize they have where they can move into better range before letting loose with their guns.

The movement ruler is articulated and ships are allowed certain numbers of 'clicks' of turning each space interval. It's pretty clever and easy to learn to use, but quite restrictive maneuvering wise for the big ships. Very thematic. We both ran into space hazards, and my opponent managed to bumper car his own ships a couple of times. 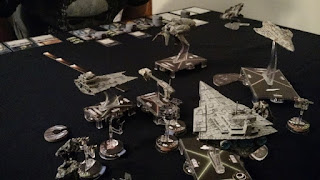 The ships end up with quite a different flavour. I particularly notice my smaller star destroyer was a pig to move and turn. There's a variety of defensive tokens that each ship gets, which also conveys a difference in how each ship functions in battle (ex nebulon b frigates have 2 evade tokens, whereas the big star destroyer has none). 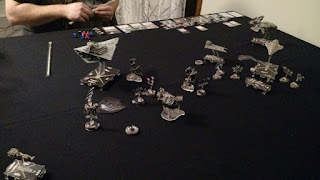 I was soundly thrashed by my opponent. I think poor setup (I didn't get my big ship where it was much use, and my small ships ended up directly facing his bruisers), and a failure to capitalize on my hyperspace ambush (I popped in right as everything was flying out of range of my guns) weighed pretty heavily. It also takes a bit of time to grok a new game. 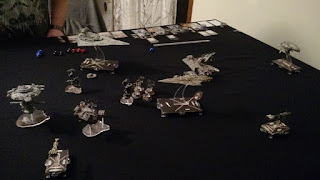 I'm totally looking forward to getting in some more games, as it has a very cool look, and seems to play reasonably fast.

We figure a bit under 3 hours with 'tournament point value' including rules explanations, occasional rules look ups, & general unfamiliarity (i.e. thinking hard about what to do for each phase, rather than it being fairly obvious what the better options are).  I could easily see this dropping to 2 with a second or third game. 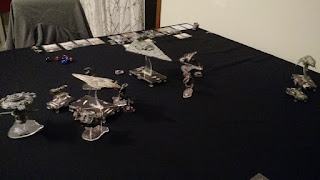 SAGA Crecent and Cross - God will recognize his own 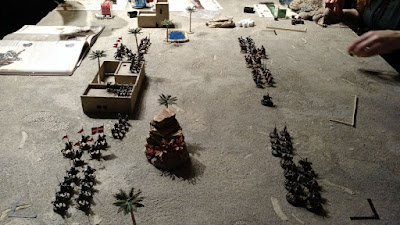 I managed a trip over to Vancouver just in time for the snowpocalypse of 2016. After a day of slushing about with a substandard miniatures carrying solution, I finally arrived in the evening for a game of SAGA with friends.

We played 4 pt warbands, with two of us on each team (8 pts total). The mission was "God will recognize his own" - you only score points for killing in melee, most killing-est team wins, and troops are recycled back onto the board. 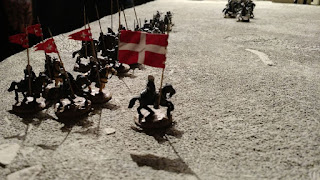 Cameron and Jenn led the fanatically hospitaller and crusader forces (including a large group of pilgrim levy). Grace and myself commanded the saracens and mutatawi (including camelry!). 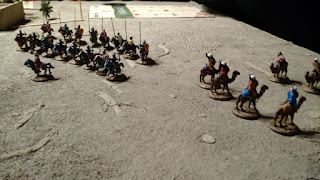 There was much hilarity as each side some some consistent 'hot' rolling while their opponents couldn't manage to roll dice to save themselves. This, of course, reversed later in the game. 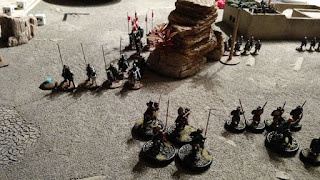 Recycling of troops always gets wacky as suicide squads charge in off the edge of the table to poach off the reduced squads that had killed those same figures the turn before. 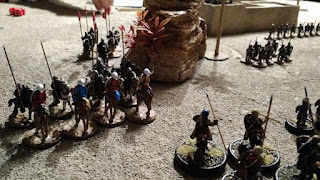 The spot lighting was pretty rough for camera work, but I like to think that  the long shadows represent dusk, or a dust storm or something. 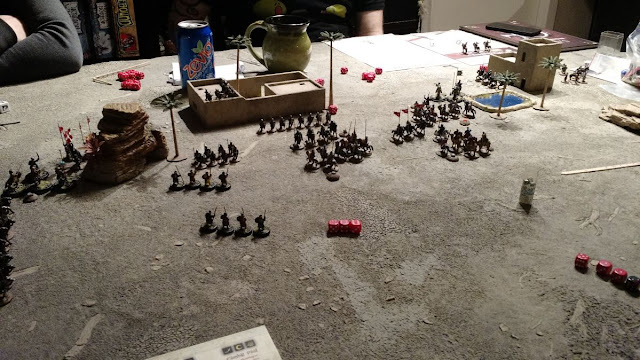 While great fun playing, I did have a number of spear and shield injuries. My travel case obviously needs some work to better protect my men from the hostile public transit environment.
Posted by daveb at 9:48 AM 4 comments: