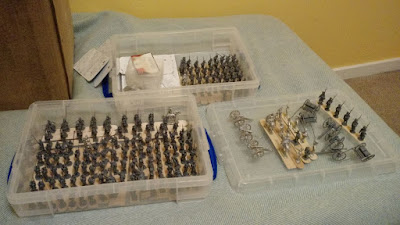 January would seem to be the month for raising your units, load the magazines, and make grandiose plans for the coming campaigns.

I have, so far, managed to assembly my entire collection of Austrian plastic that had been stockpiled. The lions share of these are victrix models which have different poses (and 2 arms!) so are much more time consuming to assemble than the marching Perry's.

In rough numbers I have a bit over 150 Austrians. Some miscellaneous stuff was also assembled to try and clean the computer desk up a bit. I intended to prime them up for the 'look I've done work!' shot, but the local game store is out of stock of the 'wraithbone' coloured priming I'm hoping to use. The plan, roughly, will be:  to prime off white, basecoat some flesh and other colours that benefit from a wash, ink it, and highlight everything necessary. 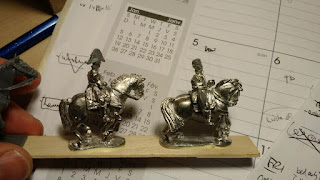 I converted some metal colonel figs with helmets to bicornes to make some higher level (field) officers. I think the heads might be sitting a bit proud on the cut neck, but I don't relish drilling out the neck so I'll live with it. 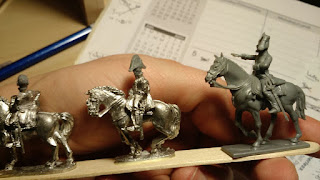 After some rumination on I've decided to make my resolutions with some 'stretch goals'. I reckon I can make some 'easy win' resolutions that can, nonetheless, be extended into harder to achieve items that might otherwise create a silly long list. Generally speaking there will be 3 levels of success to achieve, and hopefully this means I will get less total failures in 12 months and more qualified success.
1/. Host cowboy game - play unpainted//partially painted//fully painted
The prepainted buildings I have seemed to be popular and one of the local gamers already wants an invite. So.....the demand is there. Painted status really refers to cowboy figs. I'm a little dubious I have enough so that may direct a bit of spending this year.

3/. Frostgrave OR hardwired OR Pulp Alley OR some osprey skirmish ruleset - play unpainted//paint one side//paint both sides
I've been expressing a desire to play a skirmish game for years. It's time to do it, and damn the need for painted figs. If I like it and play then painting will follow I suspect. There is also the likelyhood that any figs I table will easily port between most of the rules mentioned above.

4/. Decreased Kickstarter & nerdery expenditures by 20%//Only 3 kickstarters in the year//no kickstarters
2019 was a big year for acquisitions. This must be brought under control. Kickstarters are ever so tempting, but I actually like some of the smaller offerings the most, so hopefully putting a cap on absolute numbers will result in ignoring big shiny stuff in favor of the indie stuff.

5/. # of blog posts/regular hobby updates: 26 in a year// at least 2 per month// 1 every 2 weeks
While the numbers are literally the same over the course of the year, the important thing is the frequency. Vomiting forth a half dozen posts in a month and then silence for half a year is sub-standard.

6/. Minimum figs: 1 per week (easy...)//stretch 1 per week not enfilade related
Lol. The 1st stage should be easy given my enfilade commitments. It should probably be doubled.

7/. paint and/or give away more than I buy (negative growth)//paint more
The most likely resolution to fail miserably.

Email ThisBlogThis!Share to TwitterShare to FacebookShare to Pinterest
Labels: 2020, resolutions 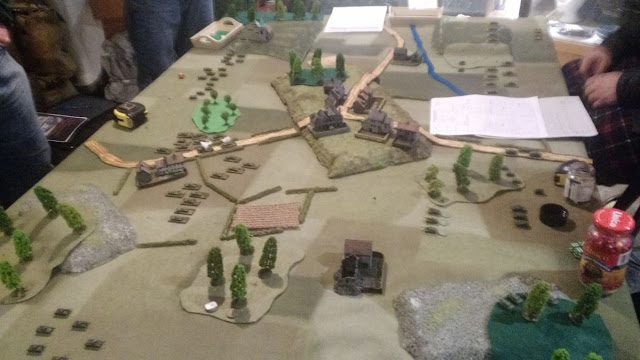 One of our local gamers, Nate, has been quietly beating the microarmour drum for a few months. Having completed some units, and with a new gamer having an impressive stock of microarmour a game suddenly materialized. Nate essentially GM'd it having played solo once of since. The system is fistful of TOW's (3 perhaps?). He wanted to simplify as much as possible so there was no artillery, air support, and very limited infantry. Tank clash, 1982 cold war goes hot!

Warsaw pact troops race in from the left, while the imperialist lackey running god NATO troops (myself included) engaged at their extreme range to attempt to thin the ranks of red.

Yikes! This year was a bust hobby wise. Our toddler (1st child) seemed to hoover up more and more of my time and attention (I understand this is a thing). A new work rotation resulted in a lot of extra evening shifts which totally kibosh my hobby work on those weeks. There was also some tricky scheduling hoops I had to jump through to accommodate my wife's weird work schedule and child care.

Accumulation of game material leap in leaps and bounds. I suppose when you don't do, it's easy to accumulate to fill in the void. My roleplaying game activity was pleasingly full for most of the year....which while good in some ways definitely put the bite on wargaming.

1/. Host at least one game of General du Corp with my own figs
-This requires getting the rules, making some range sticks, and painting up enough french to field a force.
FAIL. I really made minimal progress on this. A bit of an OOB, and the french are primed. A big push for enfilade 2020 might see some progress on this front.
2/. Finish my game craft mini buildings OR sigma event buildings
-The gamecraft buildings I've been chipping away at, but have had for many years. Shameful really. The sigma would be the easy version I can bang out in the fall if I've been bad.
FAIL. I have primed the sigma buildings with azithal highlights, and was doing a trial paint on the 1st one. Once I've committed to the scheme it should probably go fast. It would help if I was actually putting in time on painting though......
3/. Host/play one of: frostgrave, fistful of lead/galactic heroes, hardwired, or other small skirmish game
Previous resolutions to do a skirmish game (both sides) have failed...numerous times.
FAIL. I managed to get in two skirmish games....of carnevale. Garrets games fully hosted. Just the type of thing I'd like to host for myself.
4/.  Complete the french oob for snappy nappy for either austerlitz OR marengo.
I should have a lot of what I need. This will help focus the efforts onto what I should actually be painting for my 15mm french.
PARTIAL SUCCESS. Austerlitz is done up but the numbers are pretty bananas though compared to what I have. Consider 15mm nothing got done this year, my plan to stepping stone into a push to host this is fairly stalled.

2020 Resolutions
I'm ruminating on the resolutions still. The holidays were a bit bananas and I didn't get as much retrospective time as usual. I'm trying to decide how I'll improve my success rate, especially as some items come up year after year as fails...


Pictures of the years work after the break.....