Yikes! This year was a bust hobby wise. Our toddler (1st child) seemed to hoover up more and more of my time and attention (I understand this is a thing). A new work rotation resulted in a lot of extra evening shifts which totally kibosh my hobby work on those weeks. There was also some tricky scheduling hoops I had to jump through to accommodate my wife's weird work schedule and child care.

Accumulation of game material leap in leaps and bounds. I suppose when you don't do, it's easy to accumulate to fill in the void. My roleplaying game activity was pleasingly full for most of the year....which while good in some ways definitely put the bite on wargaming.

1/. Host at least one game of General du Corp with my own figs
-This requires getting the rules, making some range sticks, and painting up enough french to field a force.
FAIL. I really made minimal progress on this. A bit of an OOB, and the french are primed. A big push for enfilade 2020 might see some progress on this front.
2/. Finish my game craft mini buildings OR sigma event buildings
-The gamecraft buildings I've been chipping away at, but have had for many years. Shameful really. The sigma would be the easy version I can bang out in the fall if I've been bad.
FAIL. I have primed the sigma buildings with azithal highlights, and was doing a trial paint on the 1st one. Once I've committed to the scheme it should probably go fast. It would help if I was actually putting in time on painting though......
3/. Host/play one of: frostgrave, fistful of lead/galactic heroes, hardwired, or other small skirmish game
Previous resolutions to do a skirmish game (both sides) have failed...numerous times.
FAIL. I managed to get in two skirmish games....of carnevale. Garrets games fully hosted. Just the type of thing I'd like to host for myself.
4/.  Complete the french oob for snappy nappy for either austerlitz OR marengo.
I should have a lot of what I need. This will help focus the efforts onto what I should actually be painting for my 15mm french.
PARTIAL SUCCESS. Austerlitz is done up but the numbers are pretty bananas though compared to what I have. Consider 15mm nothing got done this year, my plan to stepping stone into a push to host this is fairly stalled.

2020 Resolutions
I'm ruminating on the resolutions still. The holidays were a bit bananas and I didn't get as much retrospective time as usual. I'm trying to decide how I'll improve my success rate, especially as some items come up year after year as fails...


Pictures of the years work after the break..... 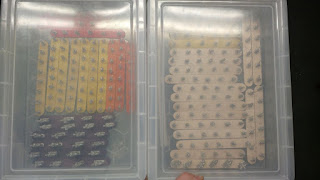 Most of my productive work this year involved cleaning and prepping figs getting them organized and mounted for painting. These are some 7 year war figs for an imagination project that I got during an estate sell off. 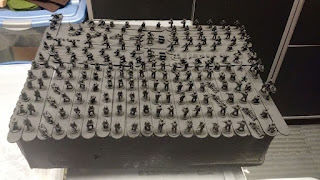 Some of my figs have even reach the stage before paint hits them! Here we see 3 small forces of 15mm sci fi from gzg. Definitely need some colour so I can differentiate the sides! 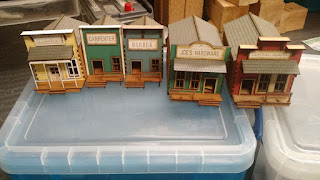 Assembling pre painted buildings seemed about my speed this year. 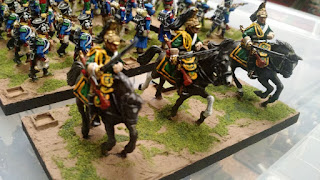 Converted perry dragoons. The conversion is adding braid and saddle furniture, so nothing too exciting or difficult. 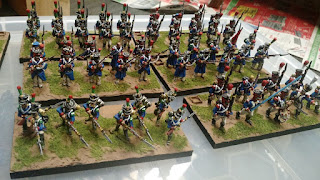 Enough young guard to....ummmm.....exhaust the local shoe supply? They are a fun and colourful group with the fancy split colour plume. One item to complete would be adding a flag to the standard bearer (I think it would be a solid white one hilariously enough).
Posted by daveb at 11:04 PM

Email ThisBlogThis!Share to TwitterShare to FacebookShare to Pinterest
Labels: 2019, 2020, resolutions