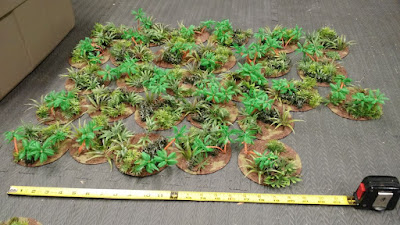 I was swapping emails with a local gamer and tried to send him pictures of some of the terrain I'd made. Turns out I'd never put pictures on my blog. Even more surprisingly, I didn't have pictures. Ver strange because I could swear I took a photo when I finished the project. Strange stuff.

These are jungle terrain bases on CDs. I got the idea from Too Fat Lardies walkthrough for "charlie don't surf". It took me a coon's age to track down the dark green 'grassy' door mat stuff. Months and an international border before I spotted one in point roberts. Pain in the posterior to stuff in my backpack and motorbike with it. Even more annoying that now I see them regularly in many hardware stores. I must have been ahead of my time.

The original pictures appear to be casualties of the photobucket shakedown that has screwed a lot of blogs recently. Basically you use cake topper palm trees, various aquarium plants, doormat grass, hot glue gun, and (for me) pumice gel media. 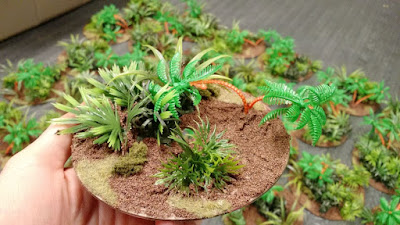 I find the palm trees too cartoony and too short. I'd like to make some extra bases with taller palms to make a 'triple canopy' type thing. The cd shinyness also seems to peek through too much. I suspect hitting this stuff with primer before hand might help.....although it might just flake off and leave a worse bond. Though I've noted a bunch of damaged trees that need some fixing (off picture there's probably another 8ish bases) so I probably shouldn't store them at the bottom of a rubber maid container with all the extress build materials on top (dur).