Lots of material to catch up on, but the latest is a game I attended in White Rock, BC.
Our host, Doug of Dots of Paint (some nice pics of close up on the figs there) hosted 6 of us to continue the development of the rules set he and Seth are working on. The rules (I don't know there is a working title) are primarily geared towards convention gaming. They look good (28mm), and can finish large battles to completion in a few hours.

RULES
The general idea is that the stand of troops represents multiple brigades and is, in fact, the ground that this mass of men would control. A corp would be represented by 8 to 12 elements.

Ranged shooting only exists for artillery (with 2 separate ranges for horse and foot artillery), musketry is subsumed into a base to base contact which would be short range firefights and assaults. The players major decisions are geared towards how to allocate limited command points (more later) and where to feed his troops in to die in useful ways.

Command points are determined by rolling a d6 for each commander with a bonus equal to the number of elements about 6.....this means that on a 6 you could give the most basic command, advance forward while in command range (~8") to your entire force (ignoring artillery). Artillery takes 2 points to move, changing direction 'radically' (basically more than 45 degrees) costs 2 as well. Outside of command range and things get rapidly more pricey.

One of the great features of the system is that at the end of a combat round, each unit in combat will suffer attrition of 1 factor (most units start at 3 or 4). This can't take you from 1 to 0, but otherwise your units get weaker as they fight, regardless of winning or losing. The original function was to prevent Guard from winning every fight and not suffering for endless combat, but it feels very 'true' to see your forces get slowly (or fast when they lose!) winnowed down.

THE BATTLE
The battle occurs in 1814 in France with the French attempting to throw back a bridge head the austrians were in the process of establishing over the Seine. The game table started with the Austrians split over the river, and holding the centre of the table. The french marched on from the left and right of the table. 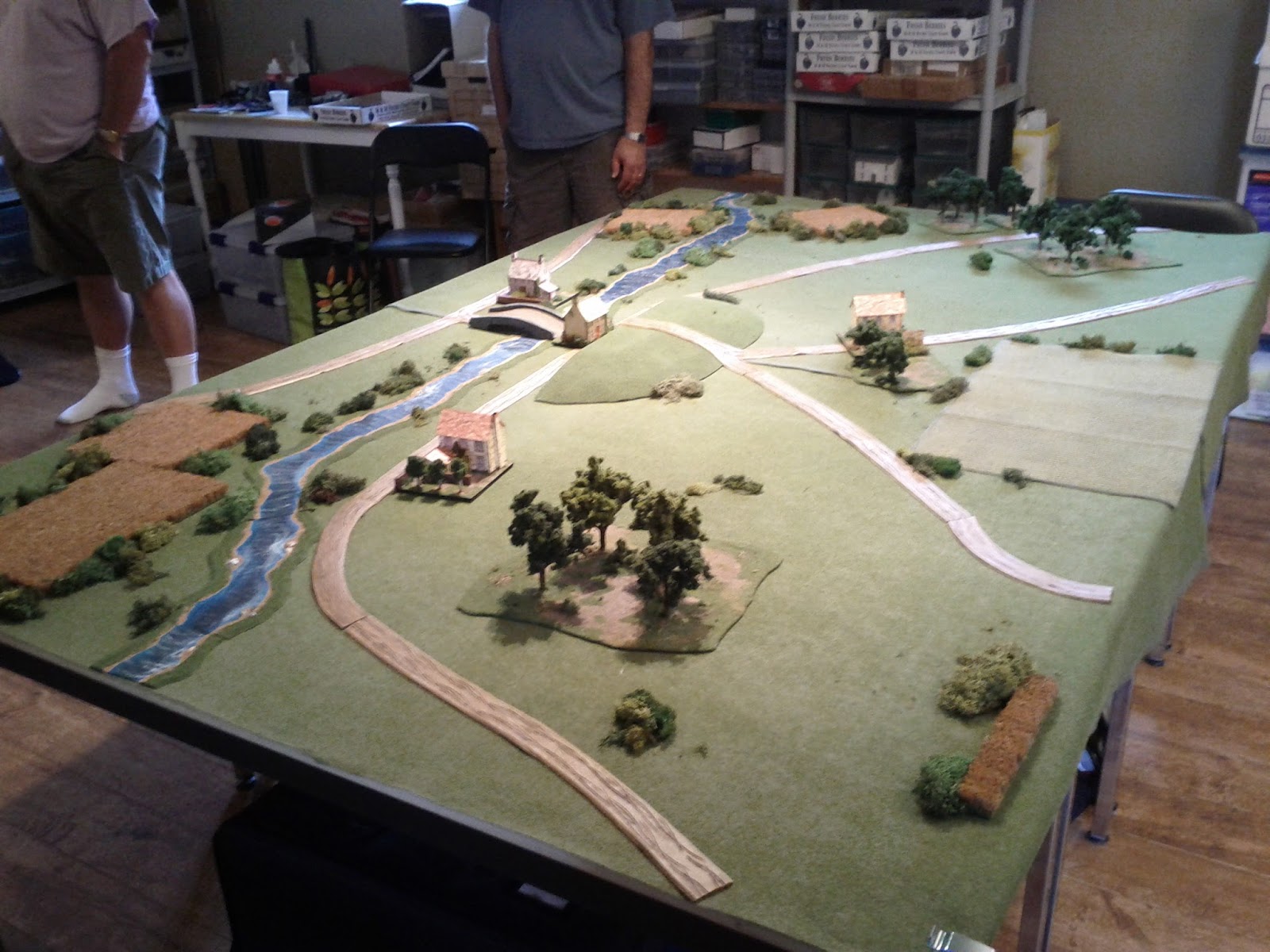 The table is around 10 x 6 I think. The river is the Seine. Austrian rear is to the Left, the French come on from the Right.


It was known that the imperial guard would be showing up later to lay the smack down on the Austrians. Ian declared he wanted to play the French for a change and requested that Bob join him. Rod and myself took the Austrians by default while Seth and Doug would help GM/explain rules and take command of the Guard when it finally showed up. 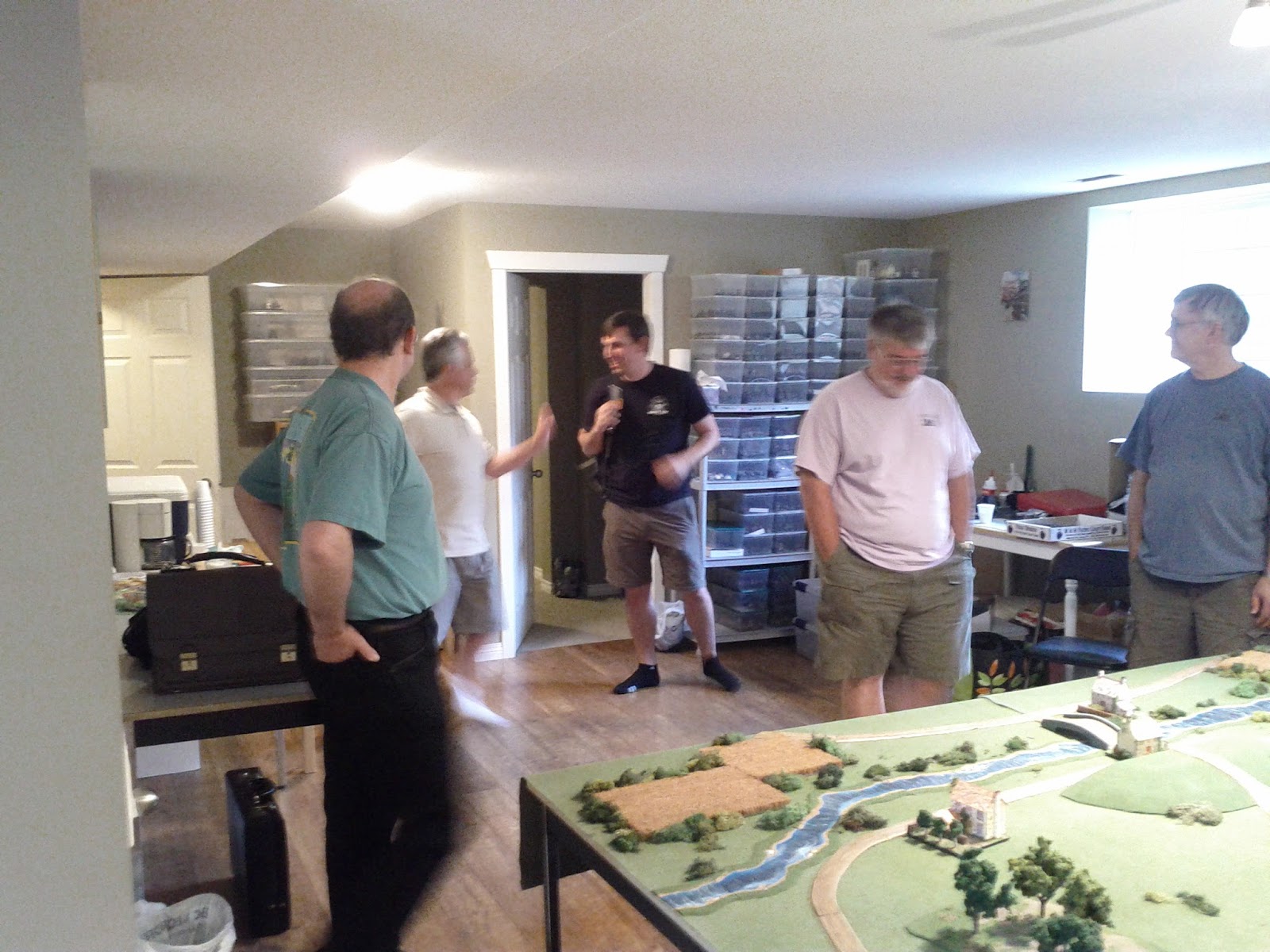 We can see (Left to Right) Rod, Doug, Seth, Craig and Bob (Hopefully I got the names all correct here). Doug has a great gaming room set up with super organized plastic bins that can be seen in the background. Transparent means you don't forget what you have! 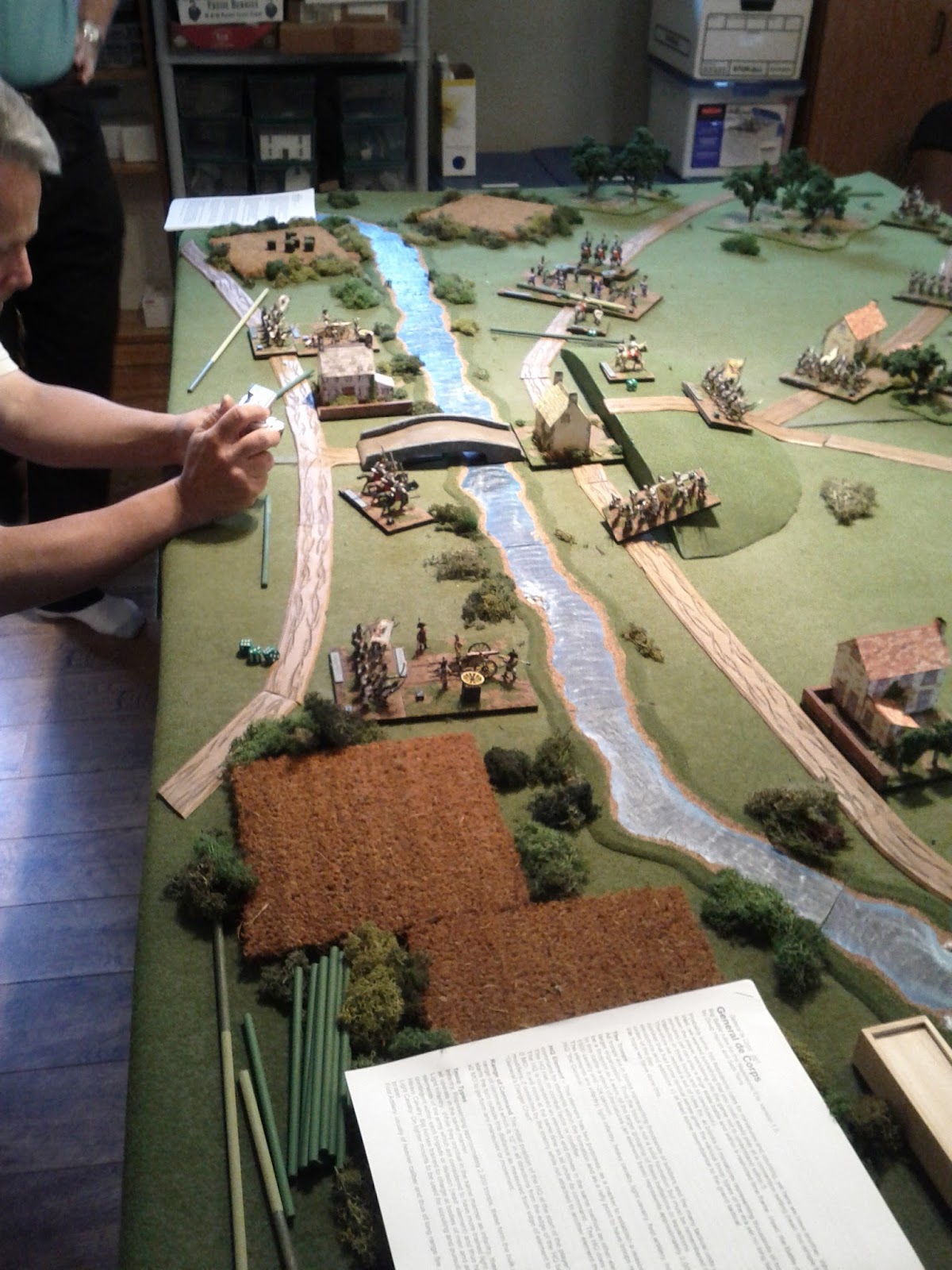 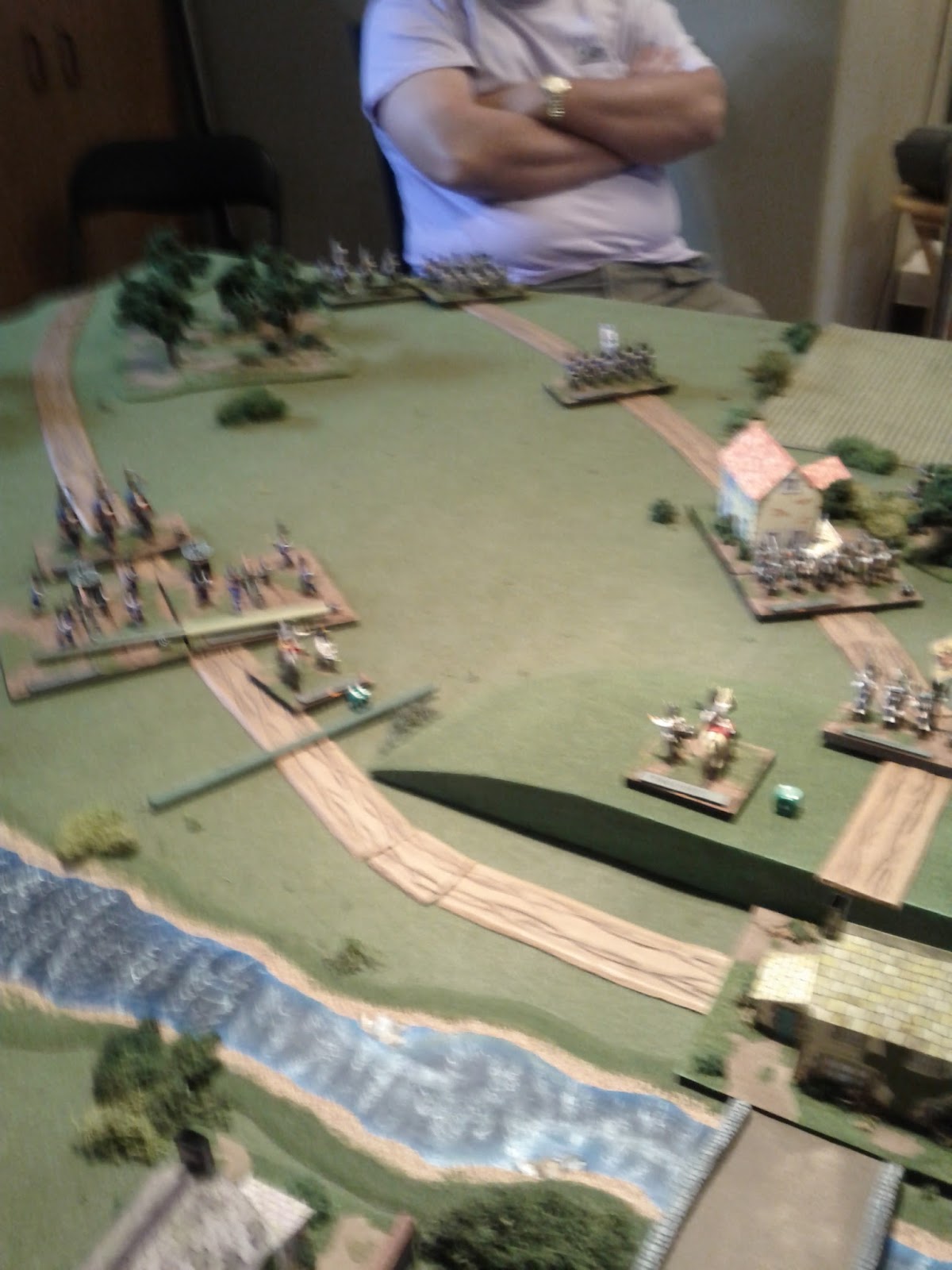 Left we see the Austrians set up. I faced a serious issue with my command scattered all over the place. Most of my early turns where trying to pull my forces together towards the central town of Montereau. Right we see the other Austrian command attempting to slow the French advance. The french on the left flank would ultimately send their strength on a stubborn Wurtemberger unit and getting blasted by horse artillery. They were insufficiently strong to resume the advance until the Guard appeared. 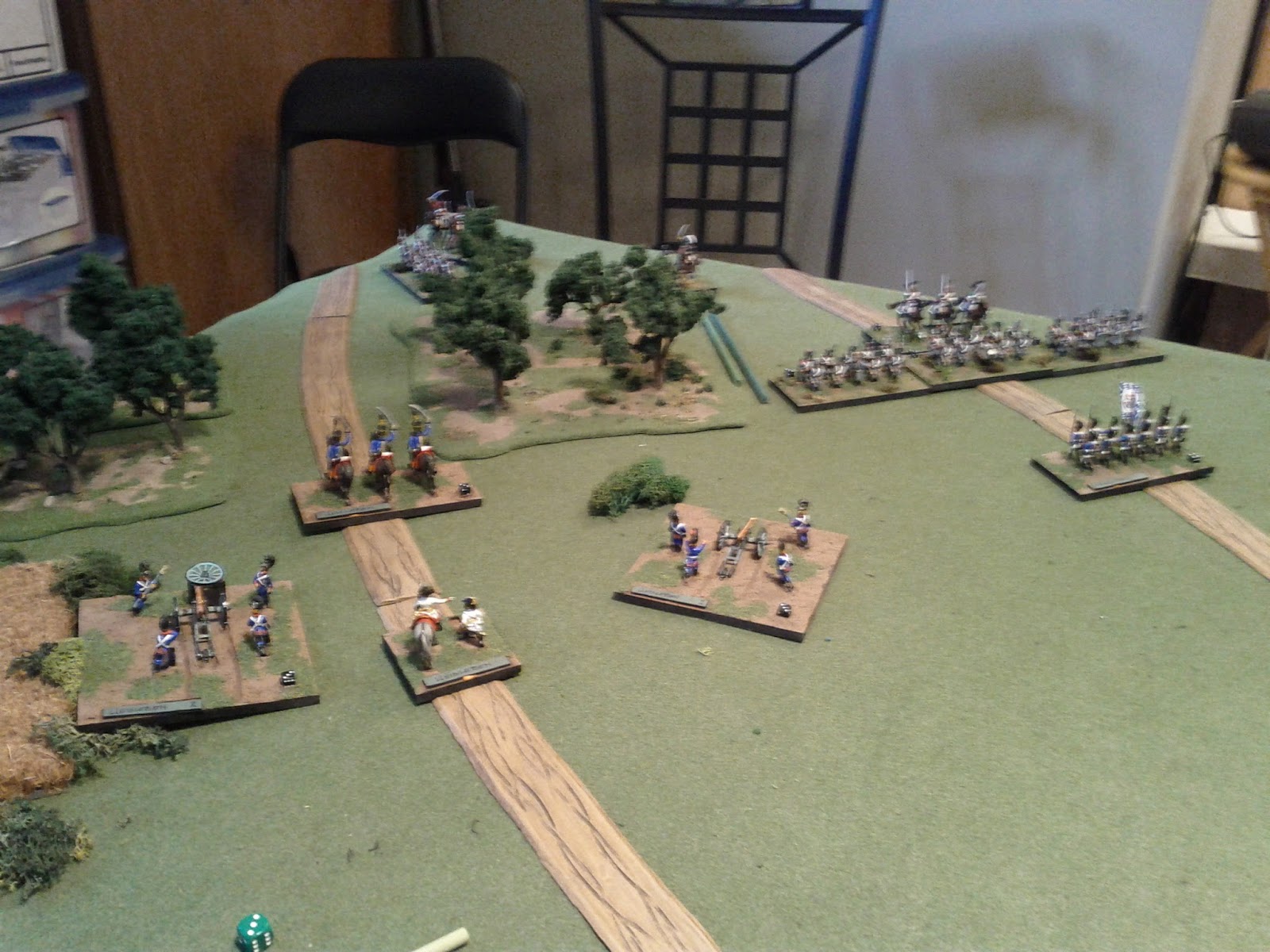 Here we see the Left flank french lining up to kill the Wurtembergers. The horse artillery is set to cause them considerable grief. Their own cavalry was a bit constrained by command distances and lack of pips so couldn't come howling down the forest road as they no doubt hoped. 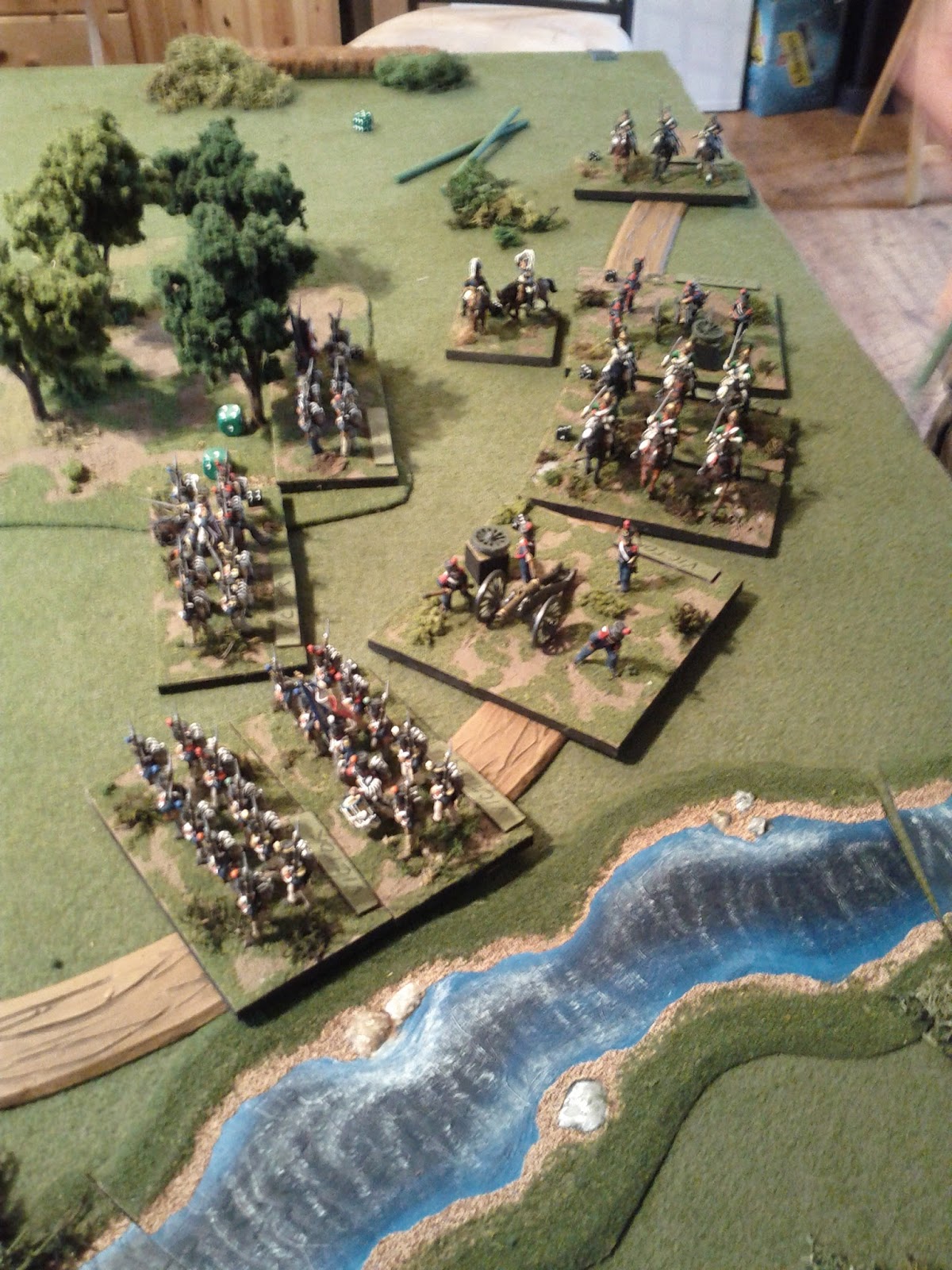 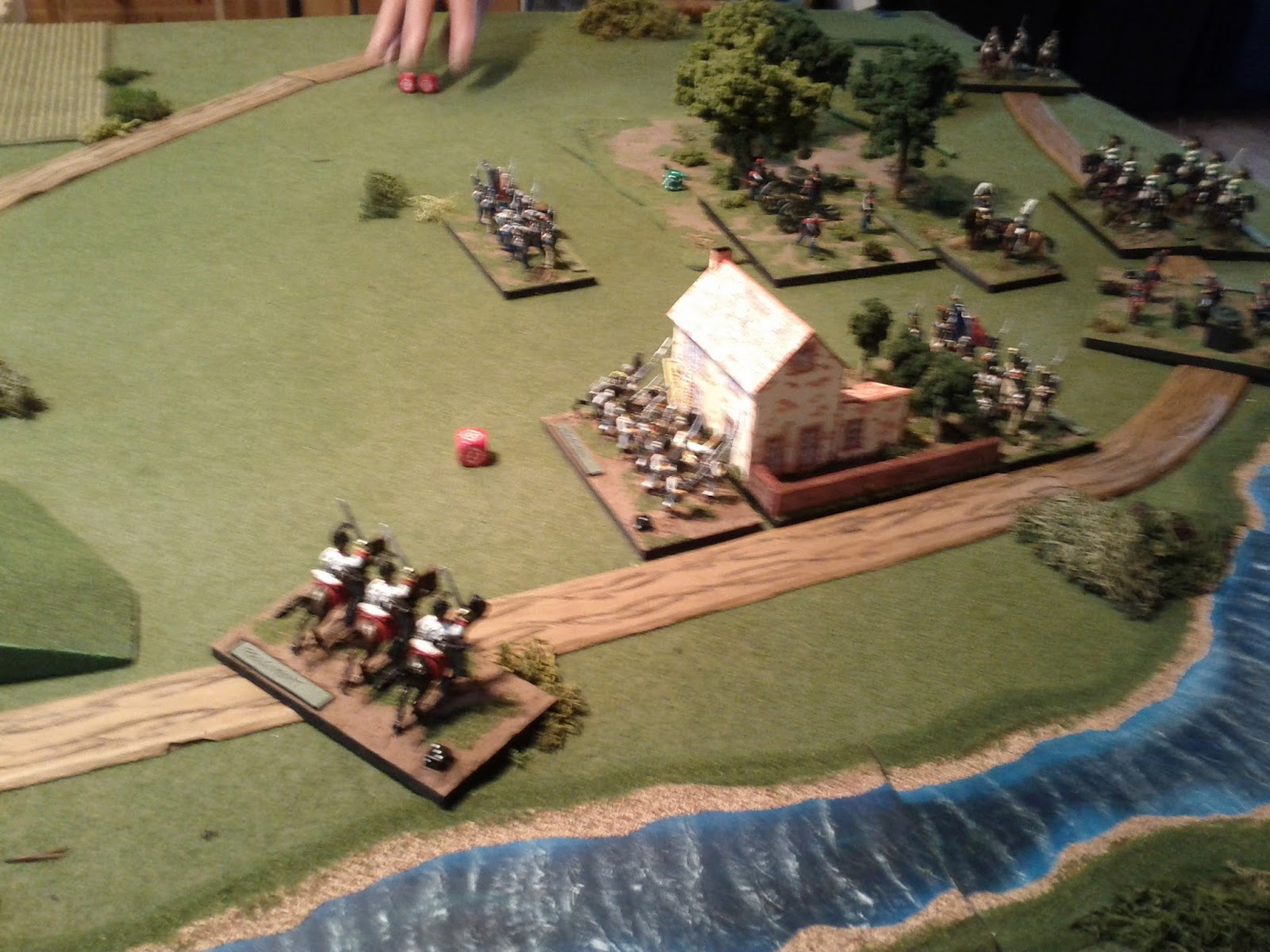 Left we see Victors command on the right flank. This turned into a foot race to occupy the village. I gave my highest priority to getting their first, and despite some low command rolls manage to squeak in there first. You can see on the right the austrians in the town, beating the french by just under an inch. Off picture to the bottom on the far side of the river an austrian foot artillery battery could jsut cover the town and the edges. This made Victor unwilling to advance along the road, and constrained by the forest. As was historical, his advance ended up very tardy. 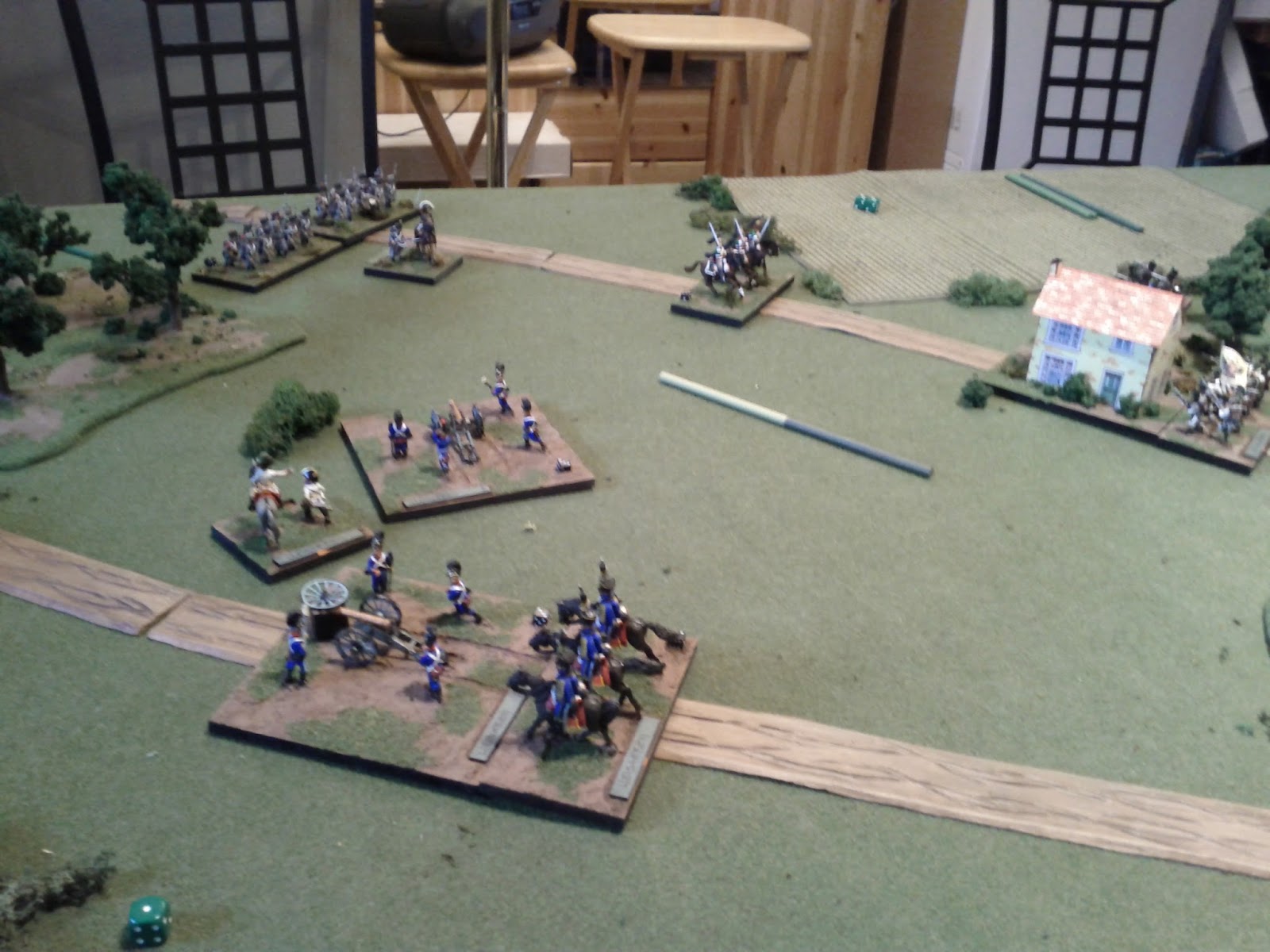 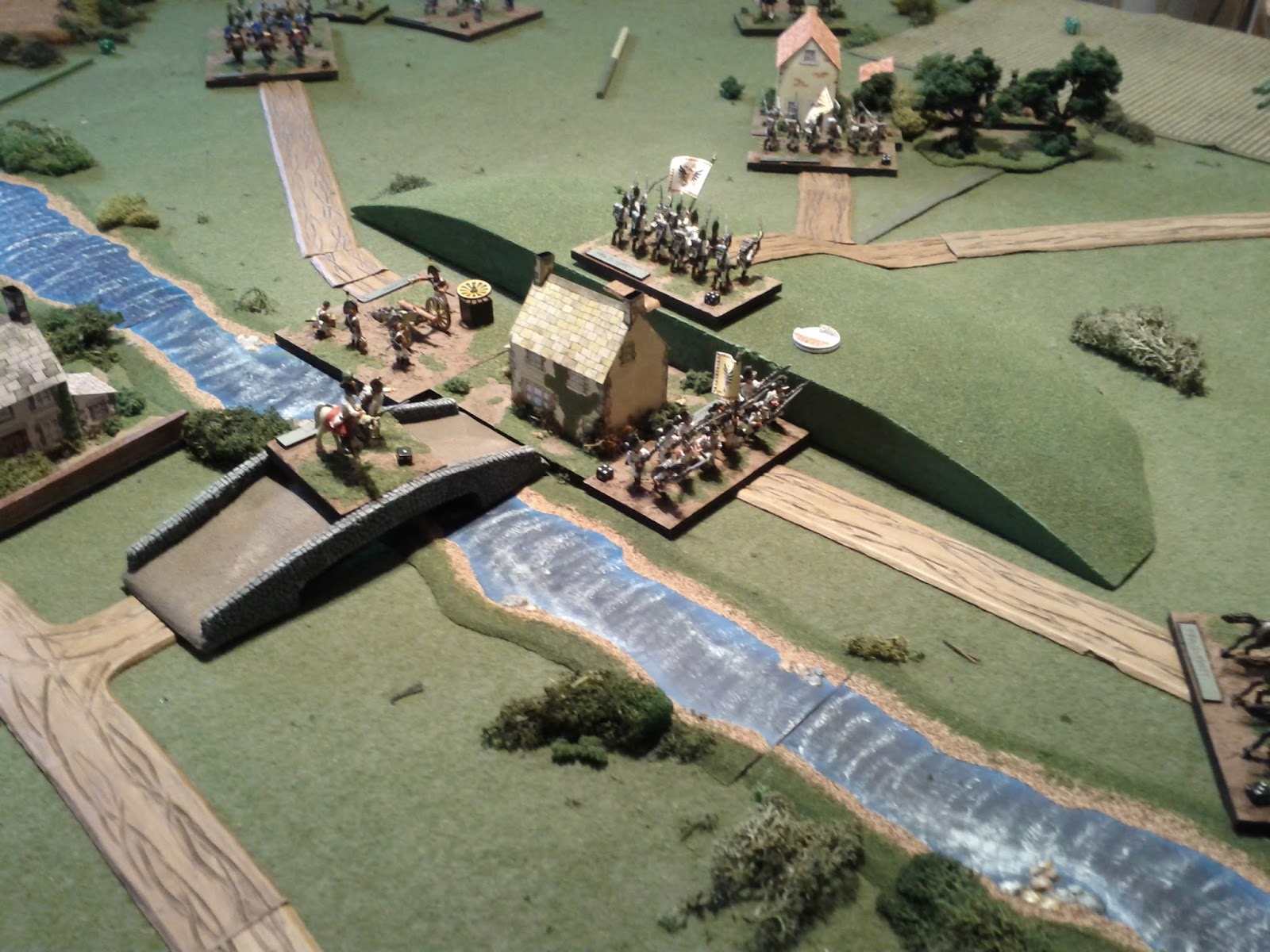 The wurtembergers are gone, taking a french unit with them. The horse artillery is well placed to deny an advance. The french cavalry is unwilling (unable perhaps, can't remember the cavalry against town rules) to attempt to evict the austrians from the town.


Here we see am Austrian battery moving to the rise North of Montereau. Artillery takes 2 pips to move, and auto limbers when moved. To unlimber it takes another 2 pips. This can by down by horse artillery the same turn it moves, but foot artillery takes must do it the next turn.

The advance was a bit painful for me to watch as I was sure I would be caught out of position. 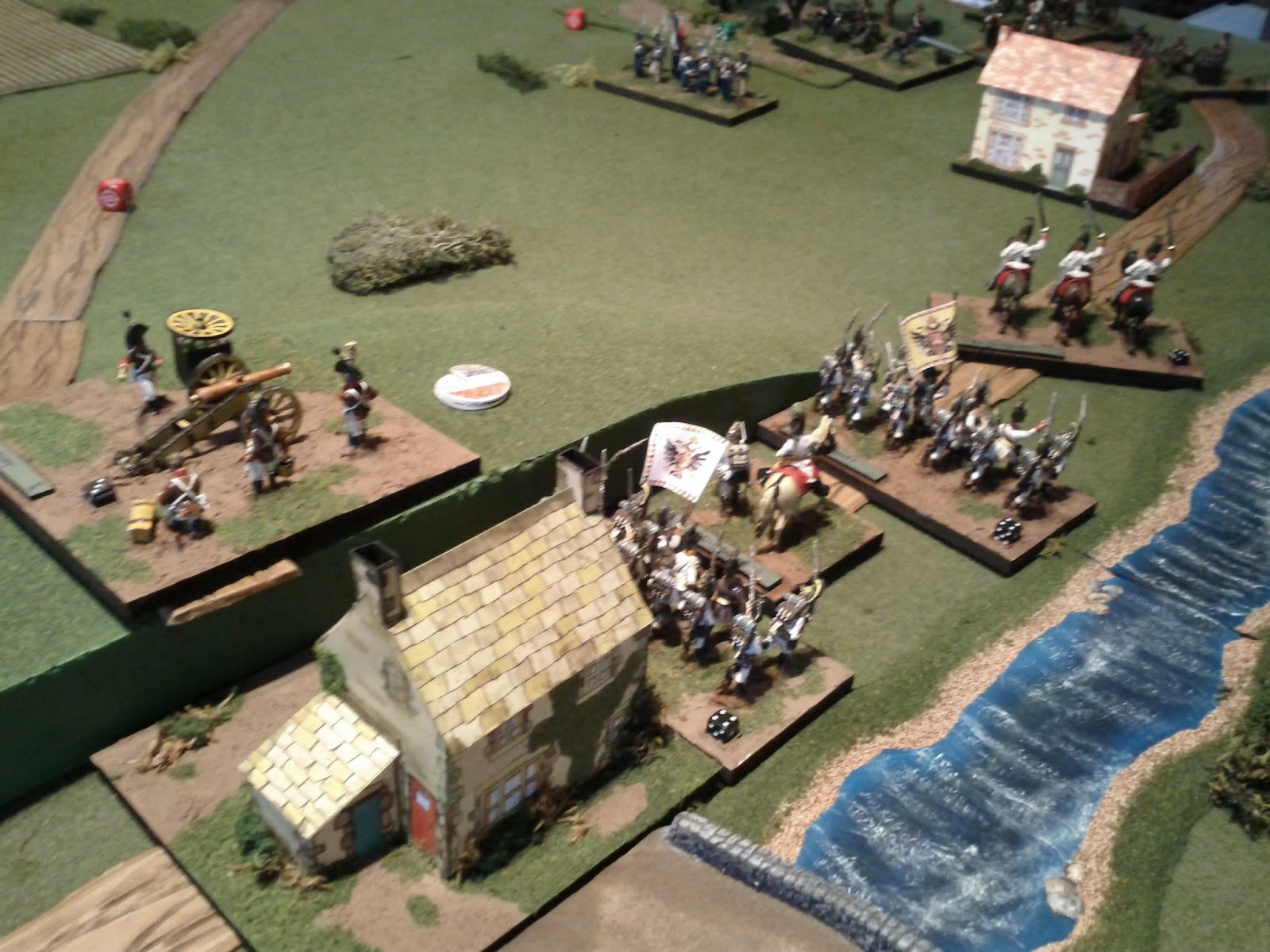 The small wheels on their side mark the limbered state on the artillery. 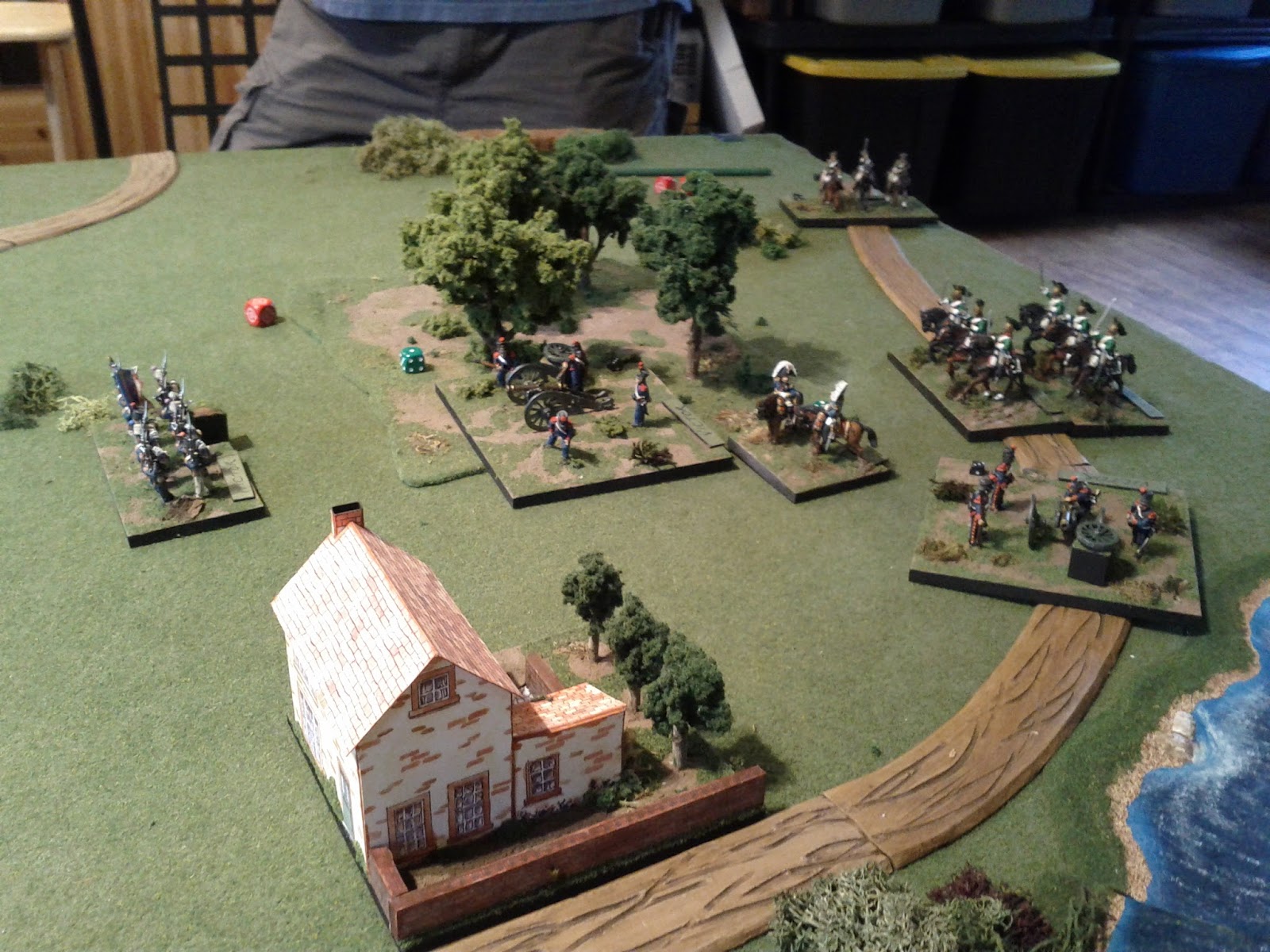 I have parked a unit in Montereau, and sent a replacement unit of foot to reinforce the village to the East.
The artillery up on the fill actually ended up playing a critical role in the later parts of the battle.

Victor's Force is now ready to blast me out of town. The town is now unoccupied as they troops fighting for it managed to disperse each other. 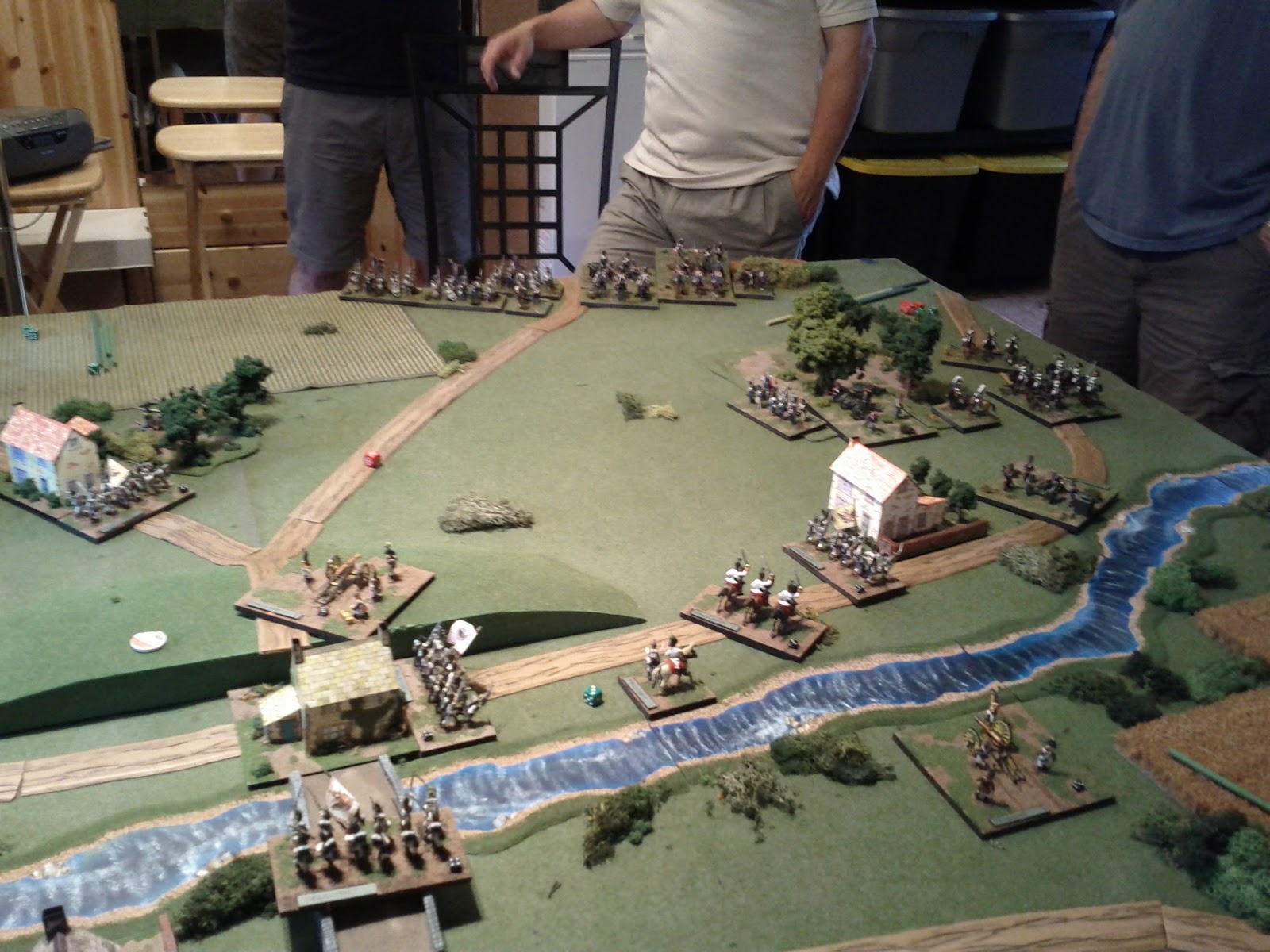 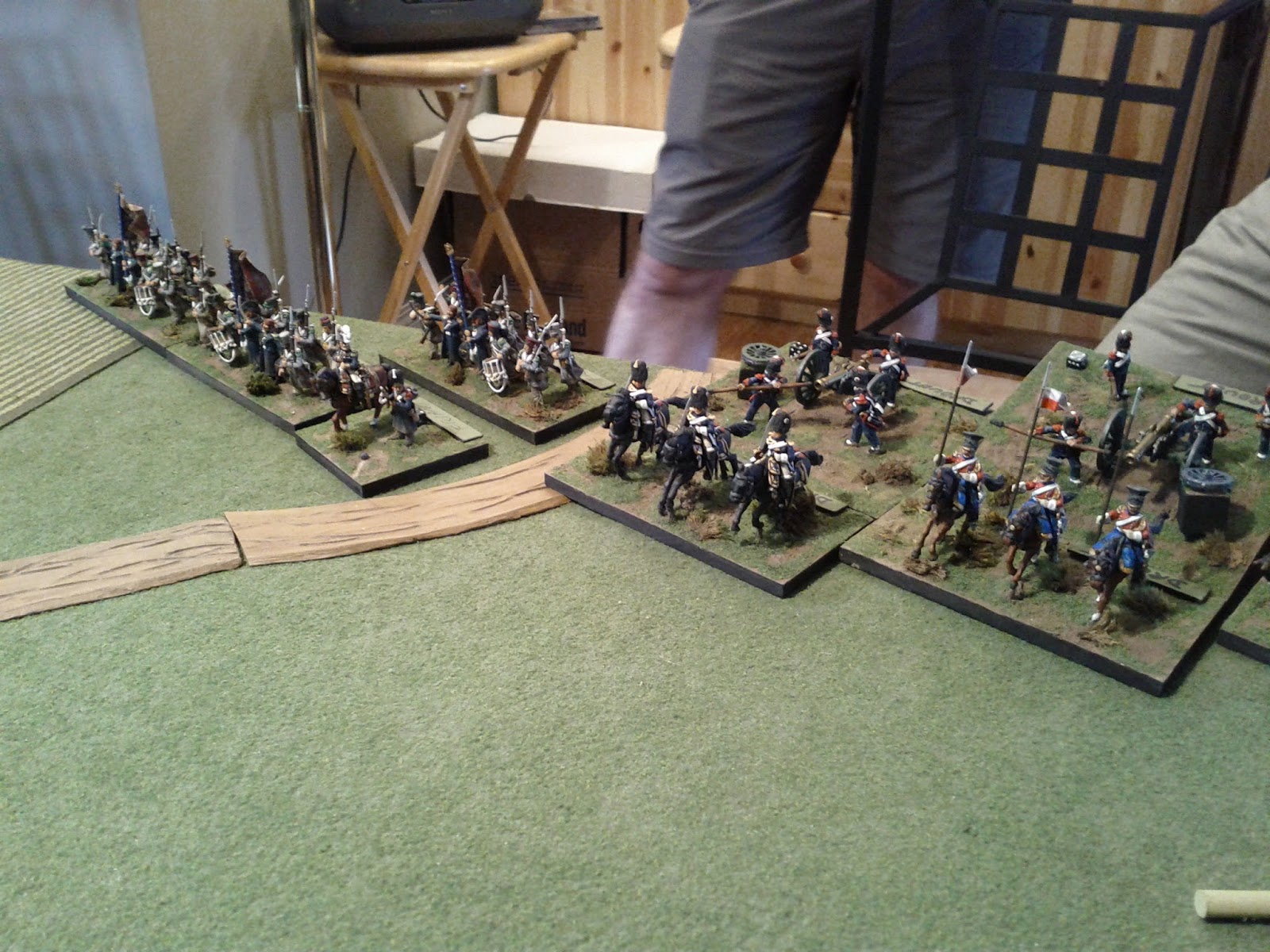 MON DIEU! The Guard has arrived. Rod and I had just started feeling comfortable that the battle lines had stabilized when the Guard showed up.

Seth took command of the cavalry and the guns, and Doug the infantry. In hindsight it would probably have been better to split the guns as it's so hard to move them up. The infantry rushed foward to do their bloody work with insufficient cannon support. (More on that later)

The first turn of reinforcements. There are approximately double this number. Looked pretty scary from where we were sitting.