A resumption of the coverage of a fictional, but historically based, game I recently played over at Doug's place with his convention fast play rules. Napoleon returns from Elba a year late and the French army splinters into Royalist and Bonapartist factions. Blucher and Brunswick are supporting a Royalist army against Napoleons attack. 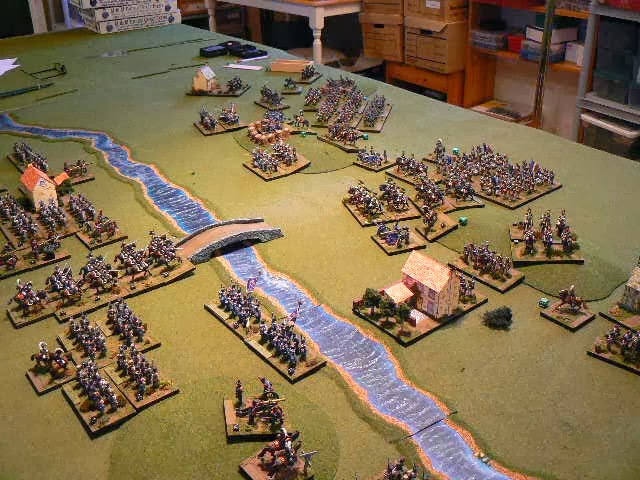 Napoleon has sent his army to engage the enemy while he flanks with his guard. The defenders are aware of reports of Napoleon approaching from the North and have staged reserves appropriately.
For the set up see here. For action on the left flank here. 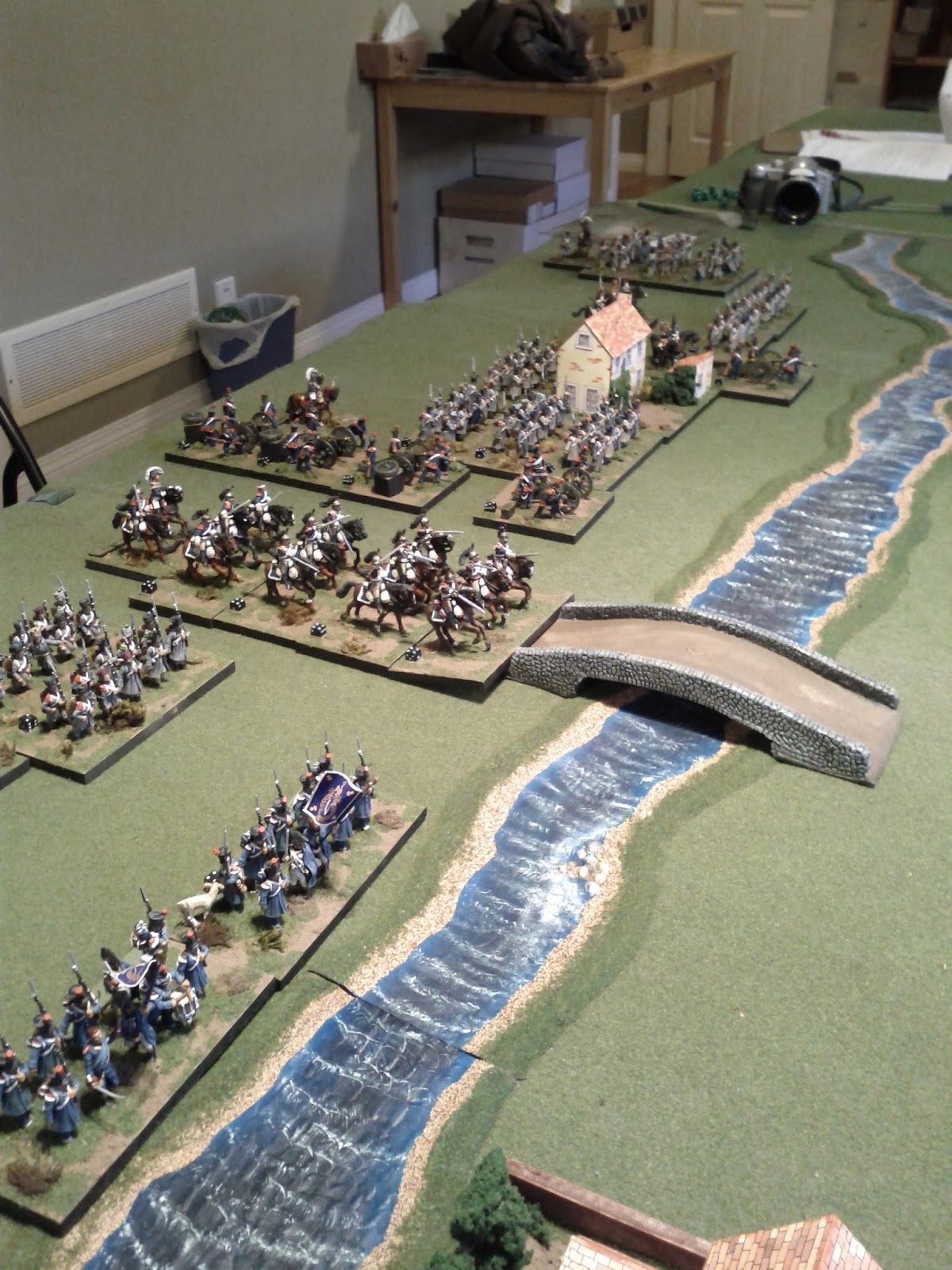 The center of the battle lines are dominated by the cavalry commands. Napoleon's forces have 4 cuirrasier of better quality (4 strength) vs the royals 4 cuirassier and 2 hussars, but the fighting on the left flank quickly bleeds off 2 of the cuirassier to stabilize that front. 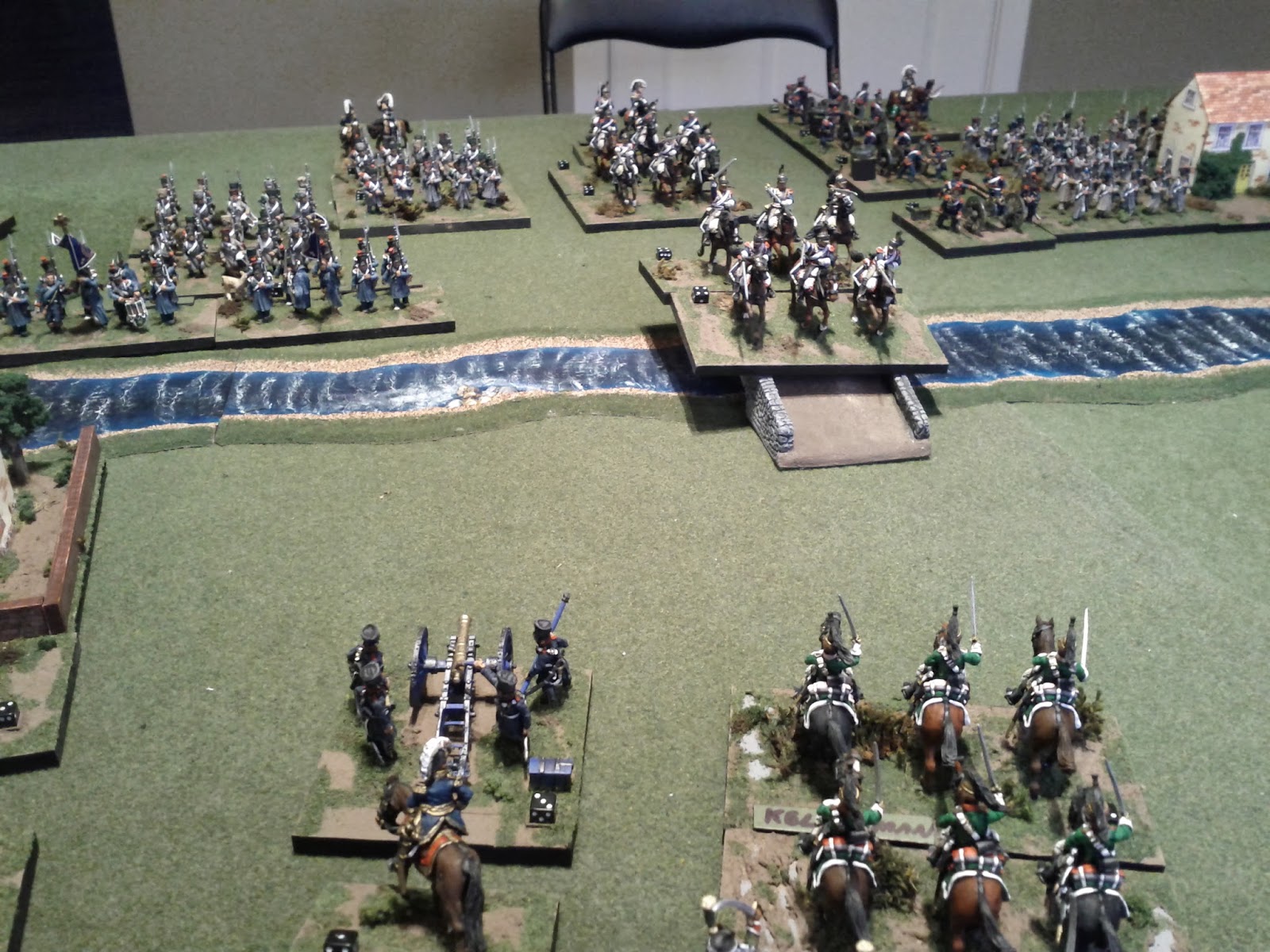 Luckily for the Royals, they have dominated the approaches to the bridge with 2 batteries of artillery (1 foot and 1 horse). They manage to score some long range hits on the horse coming across the bridge and drive back the first attempt.

The royal horse is well placed to counter charge any successful move across the bridge, but to do so too early will block any artillery fire. The newest rules iteration requires quite large fields of fire to be open. 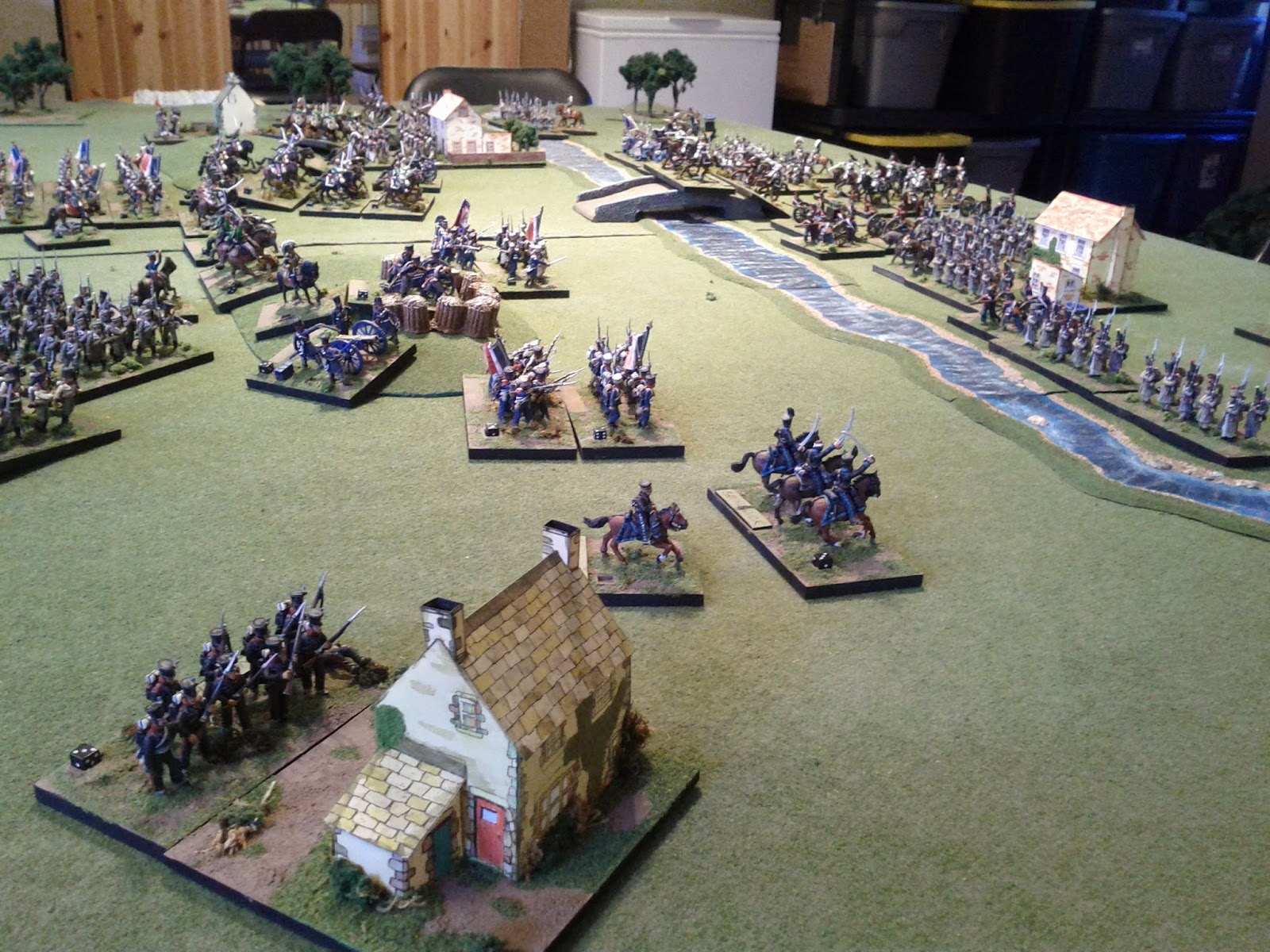 Meanwhile on the Right flank the Bonapartists have lined up on the stream. The small command facing them is based around a gabion on the hill with foot artillery (already firing across the river), and 4 elements of infantry on either side.

Brunswick has his forces anchored in towns and a gabion to the left bottom of the picture. He moves his hussar up to help contest the crossing of the stream. I was quite concerned about the flanking force arriving, so was quite unwilling to move anything else up to contest the stream. 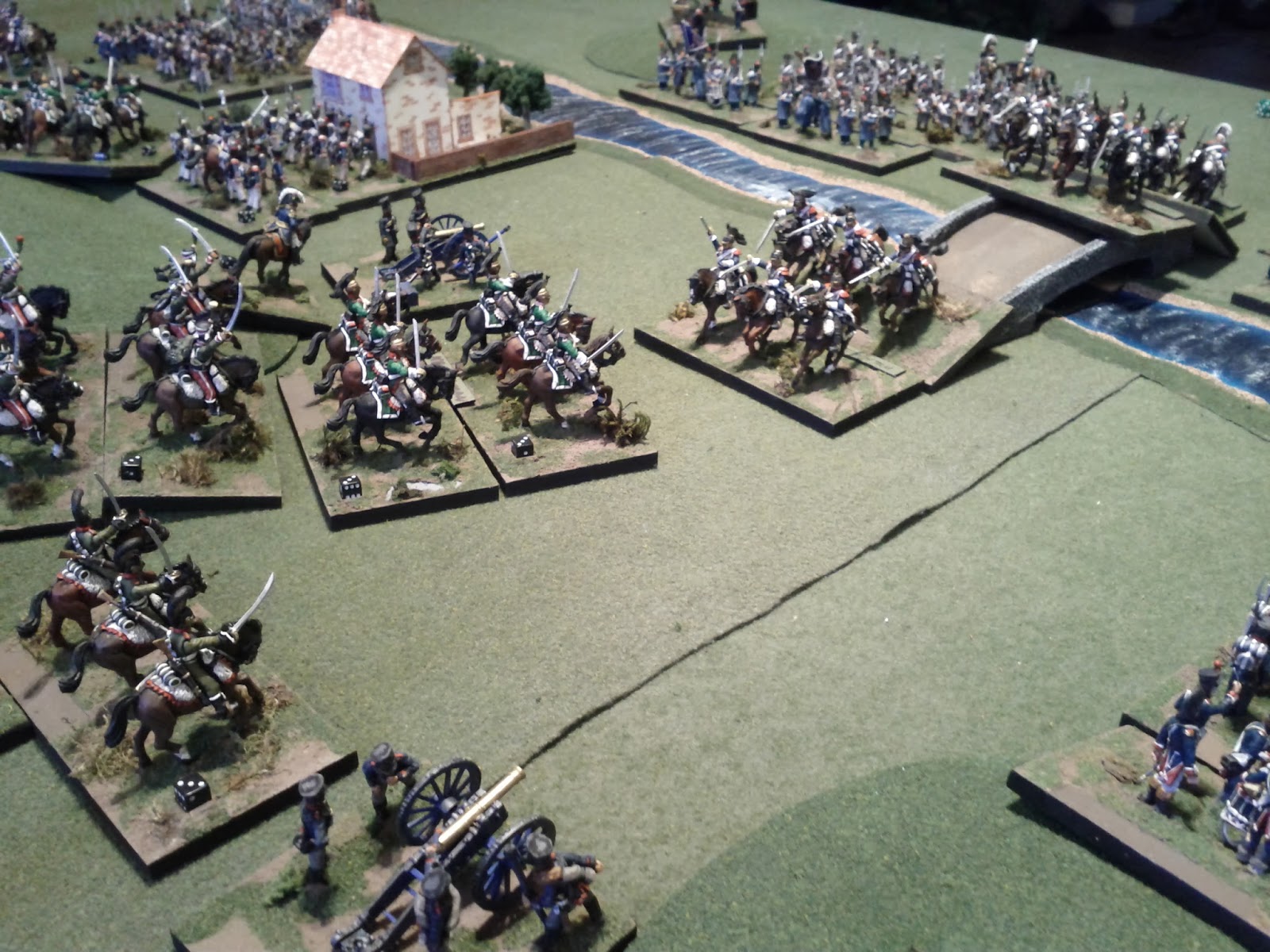 The second attempt of the bridge sees the Bonapartists much closer. The foot artillery (bottom of the pic) can't hit the lead unit at this point, but the horse artillery (on the far side of the cavalry) is now in cannister range, giving a bonus to it's firing.

This area of the field is very congested, and to try and keep opening firing lanes required no movement by the Royalists. They have a large infantry reserve located behind their cavalry, but are not in a good position to advance until there are some units destroyed. 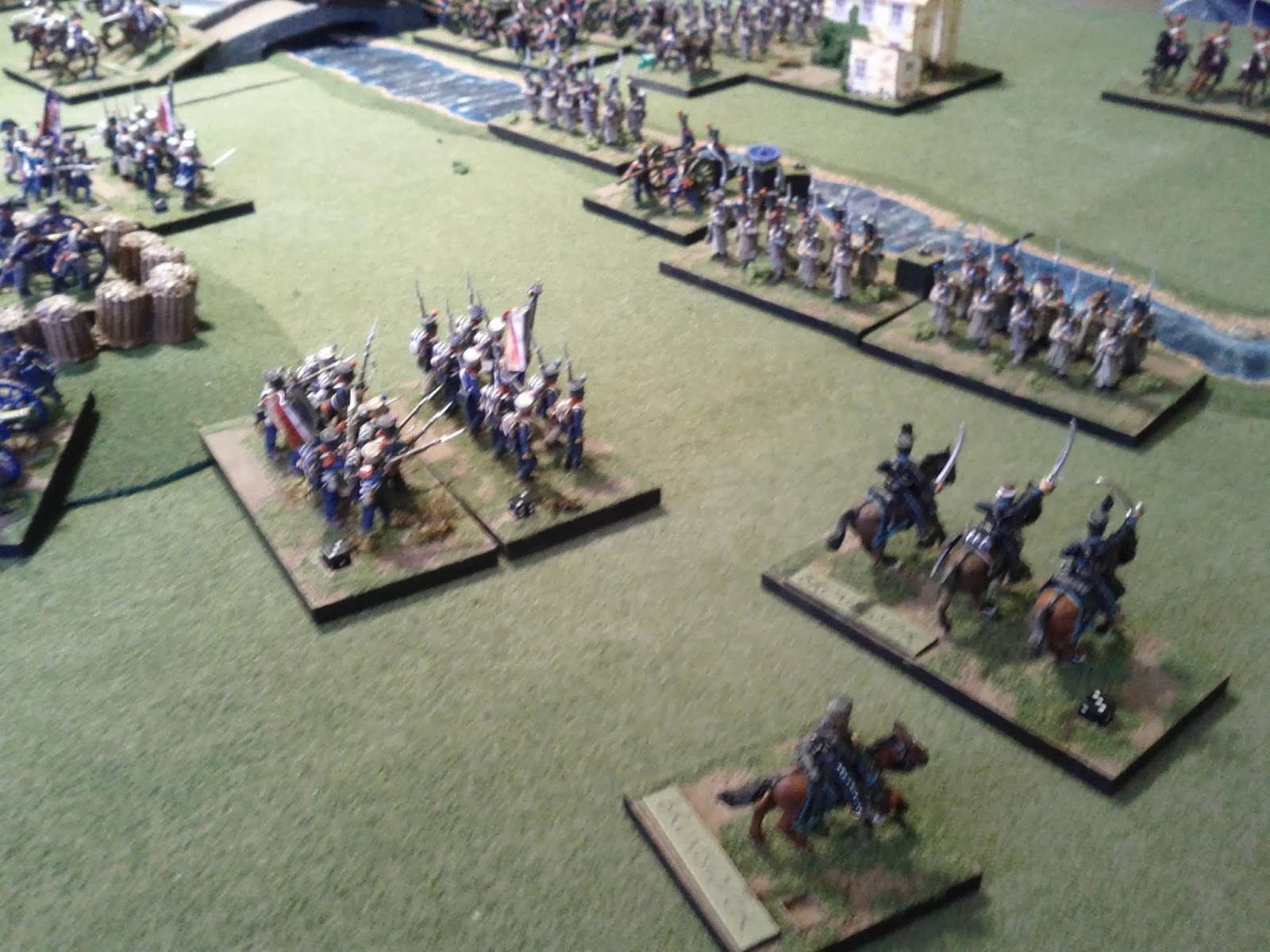 Meanwhile on the right flank we see the Bonapartists have crossed the stream. We were experimenting with a disordered marker that would give a penalty in combat right after crossing the stream, but would disappear the next turn.

The incentive was there to hit the troops as they crossed, but my troops (the royals) were a bit out of position to achieve this. The cannon on the hill was particularly ineffective for most of the game (actually Doug was very effective at rolling high enough to weather the salvos). 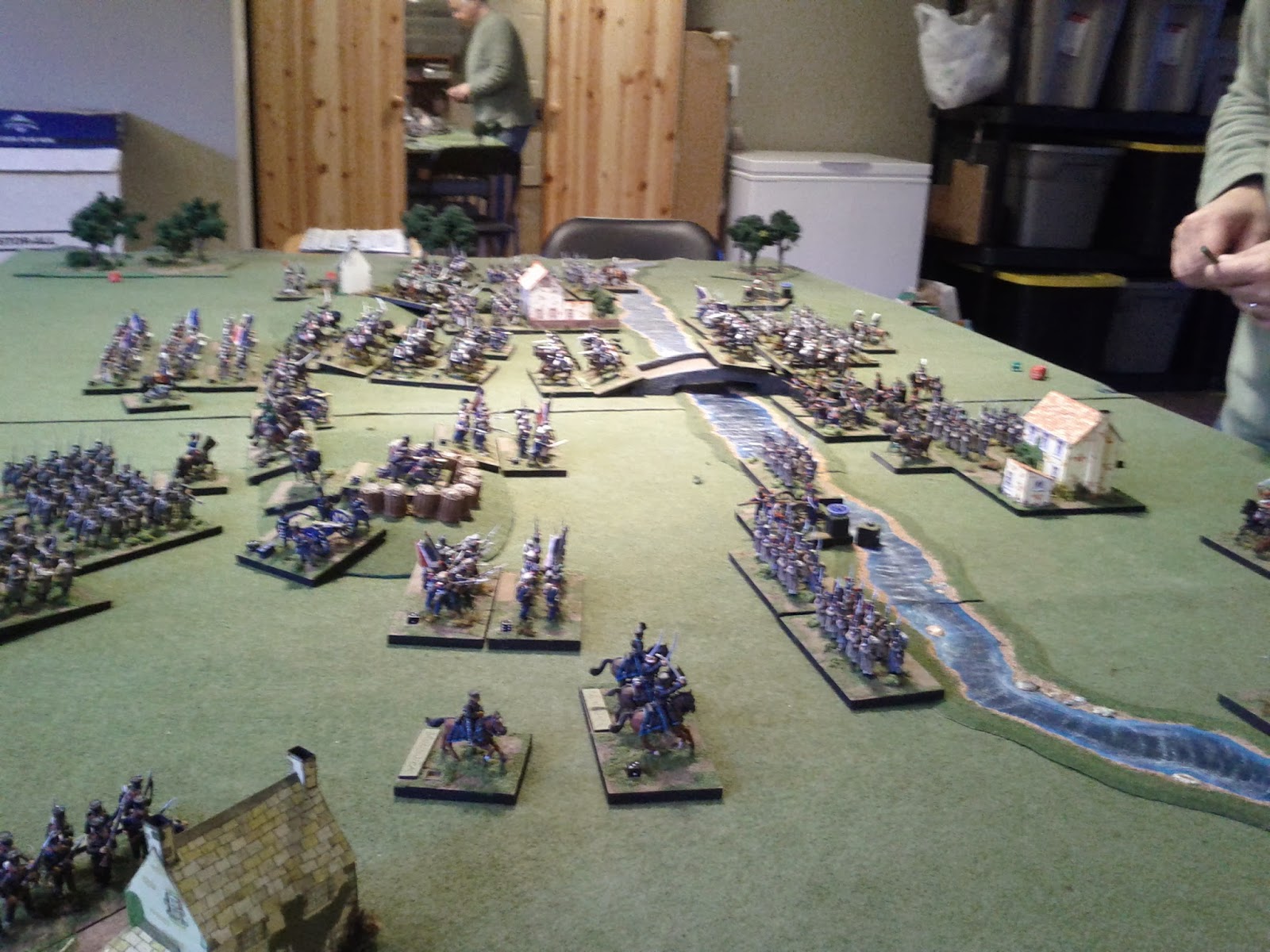 A long shot of the battle. We can now see the 2 reserves of the Royalists. One is located to the left of the hill and gabion. This would be critical for facing the arrival of a flanking force, and so it was very hesitant to move early as we didn't know where the force would arrive. It could be to the right near the stream, or to the left of the building at the bottom threading between 2 villages. Not much stood in the way except Brunswicks small command.

In the distance we see the congested mid field with an infantry reserve behind the cavalry. This reserve was constrained by lack of space and need to preserve firing lanes. Napoleons troops are struggling to bring up their own artillery which is just below the bridge on the edge of the stream in a 2x2 block. This force wasn't able to get many shots the entire game. It appears that artillery on the offensive is very challenging to use. Lots of time was spent bringing it forward, but then the crush of troops inhibited it's ability to fire. 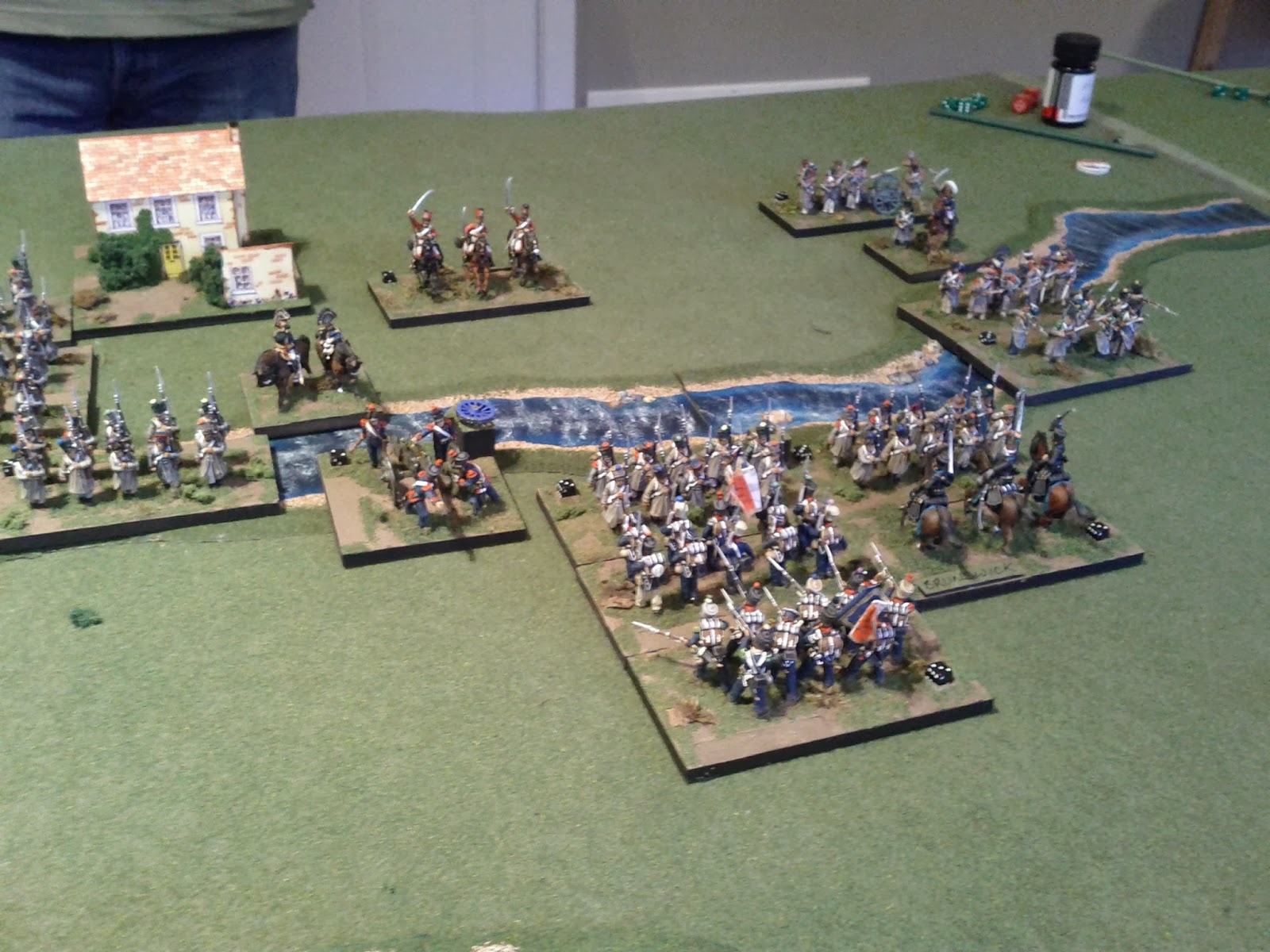 On the right flank the Royals charge into their enemy trying to hurl them back into the stream.

A battery of artillery has moved up and will start exchanging fire with the artillery in the gabion for a number of turns after this. New rules now see the effectiveness of artillery degrade as it loses strength. This seemed another fitting nerf to artillery and worked reasonably well. With 2 points artillery loses it's bonus to attack, and at 1 point it loses 1 range band. 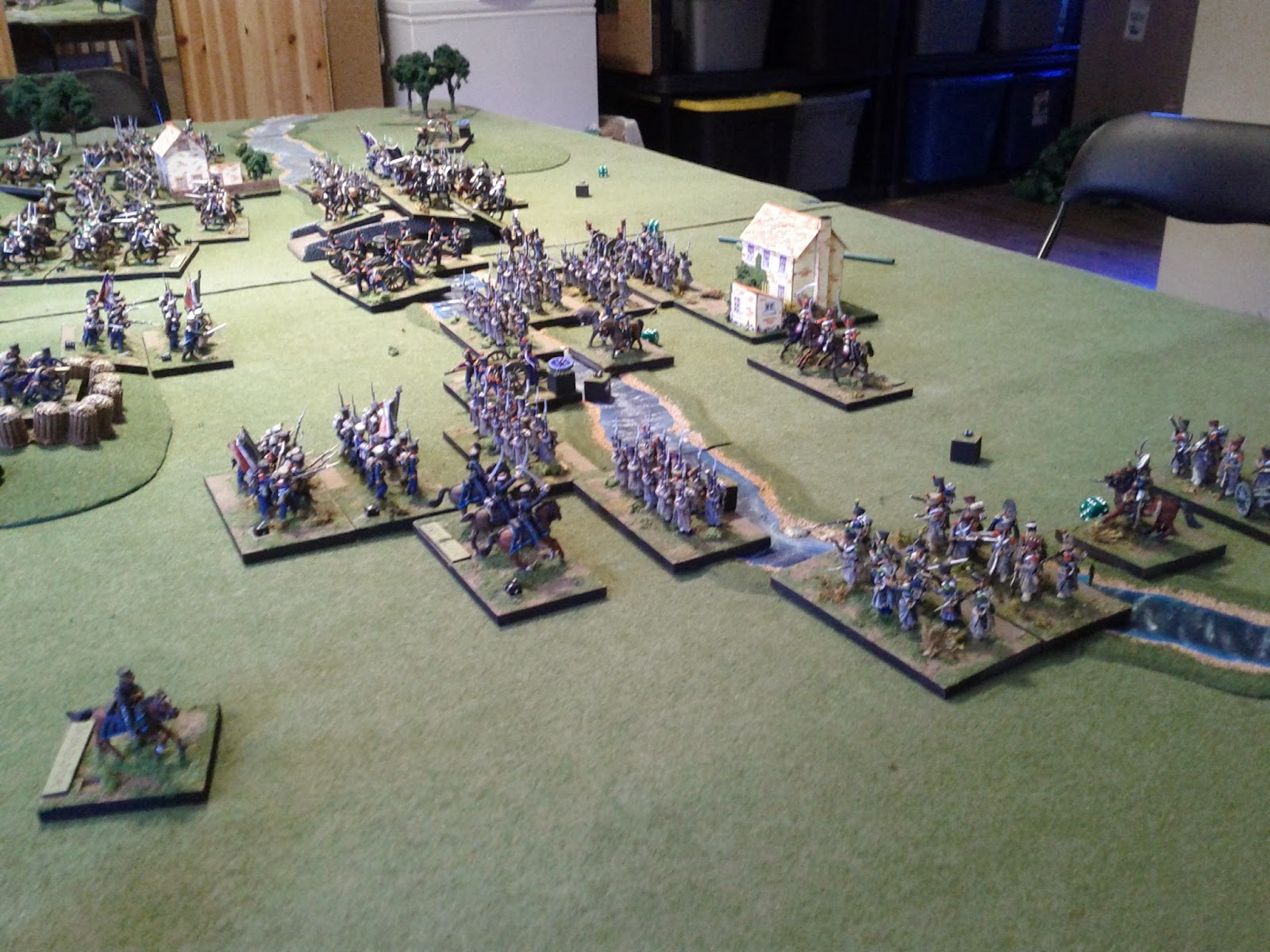 The royalists are bounced back. On the bottom right we can see unopposed troops are moving across the stream as well. This flank will need to bow back under the pressure or start to face flank attacks. 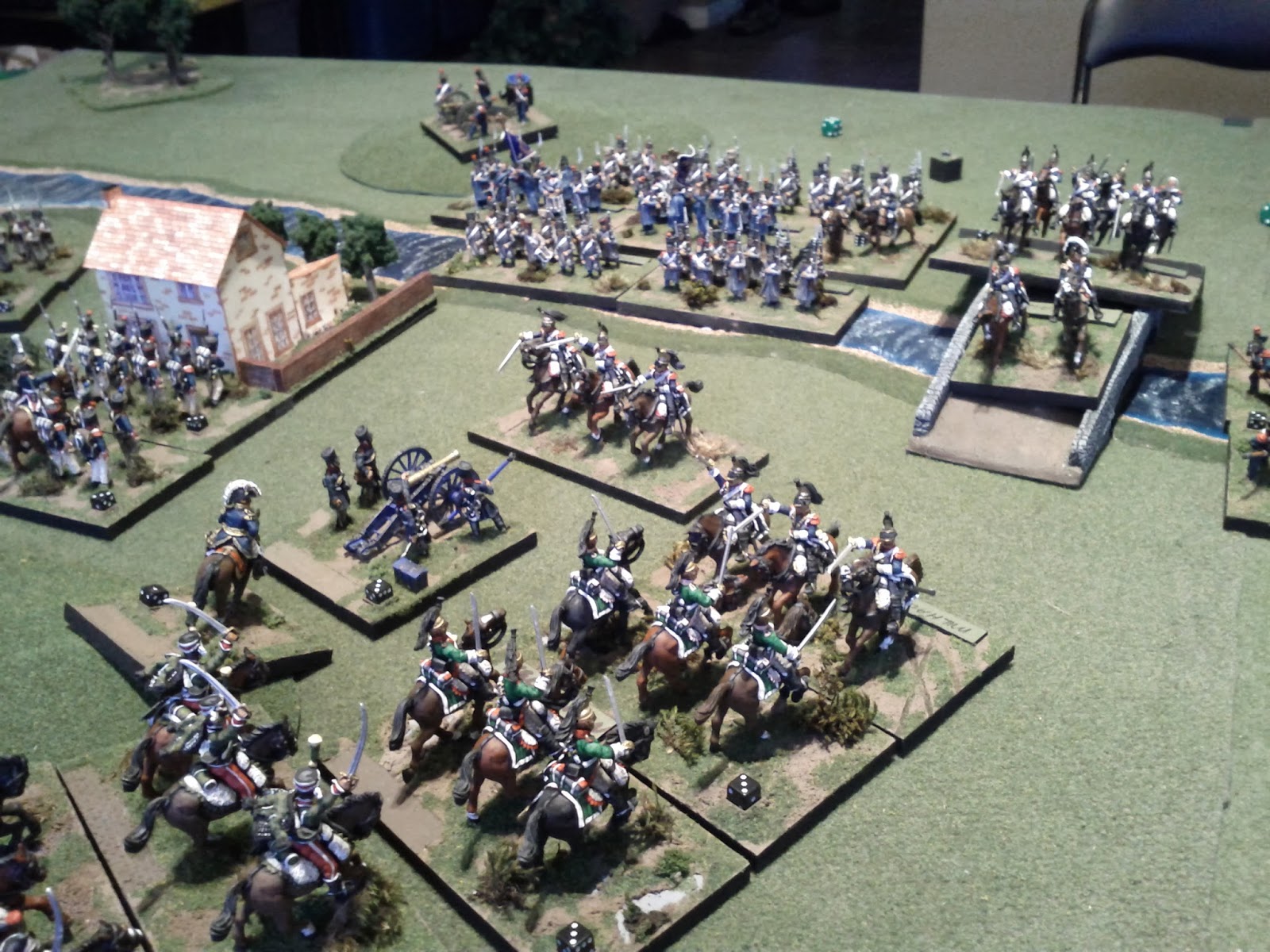 Meanwhile back in the centre the cavalry have charged home. The horse battery will be charged in the following turn, but will get one more round of shooting. It has been fairly effective at stripping off strength from the enemy and there is every possibility it might survive battle.

We can see Napoleons reserve is moving forward, screened by the cavalry. Unfortunately these troops are mostly green (strength 2) bolstered with a couple units of naval marines (strength 4). The village is now considered problematical and will attempt to be cleared. 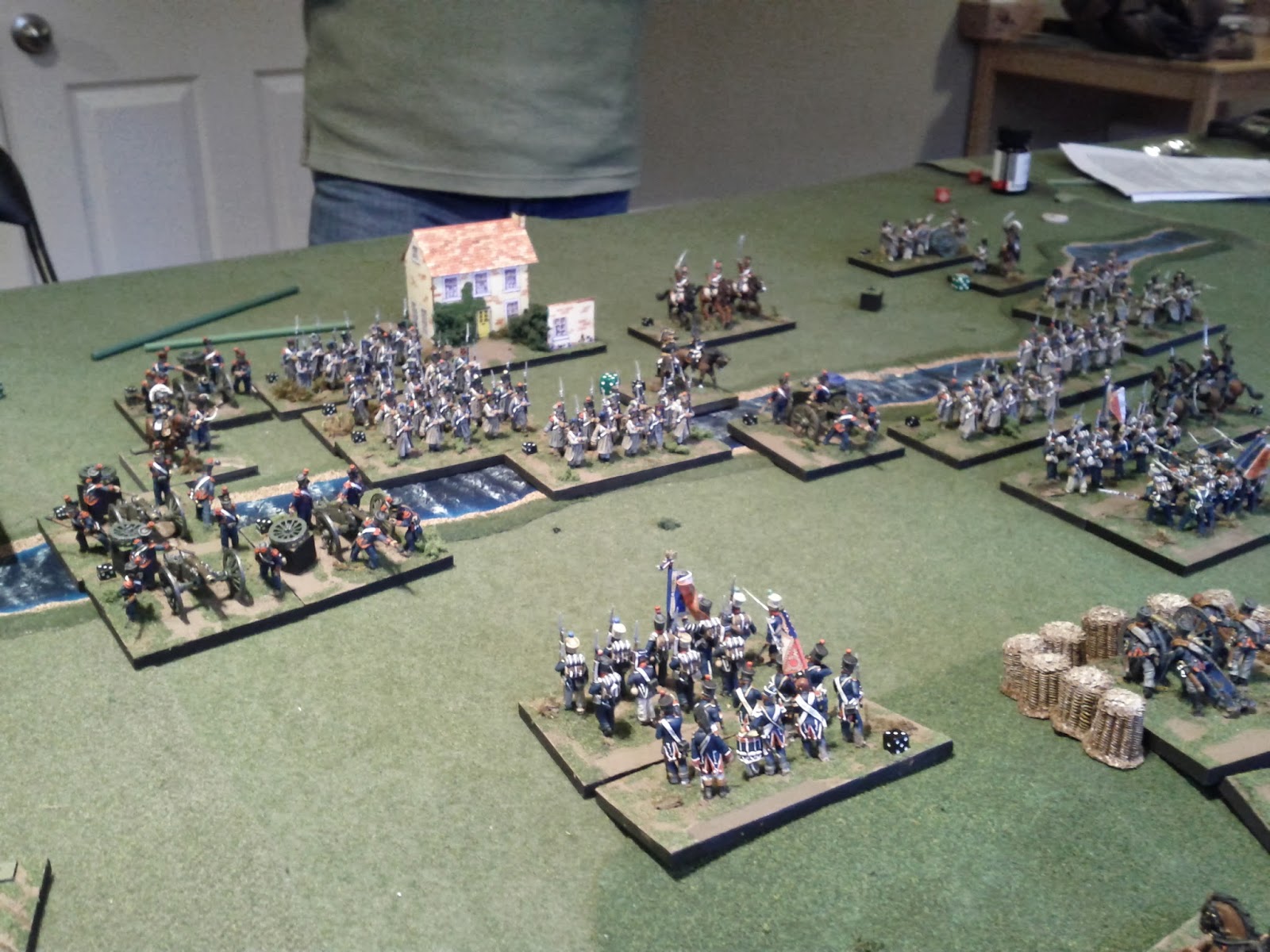 Mid-Right flank. The artillery has just about finished fording the stream. 2 units of infantry face a large foe, but the Bonapartist commander has faced a long run of low pip rolls, contributing to the slow crossing of troops. 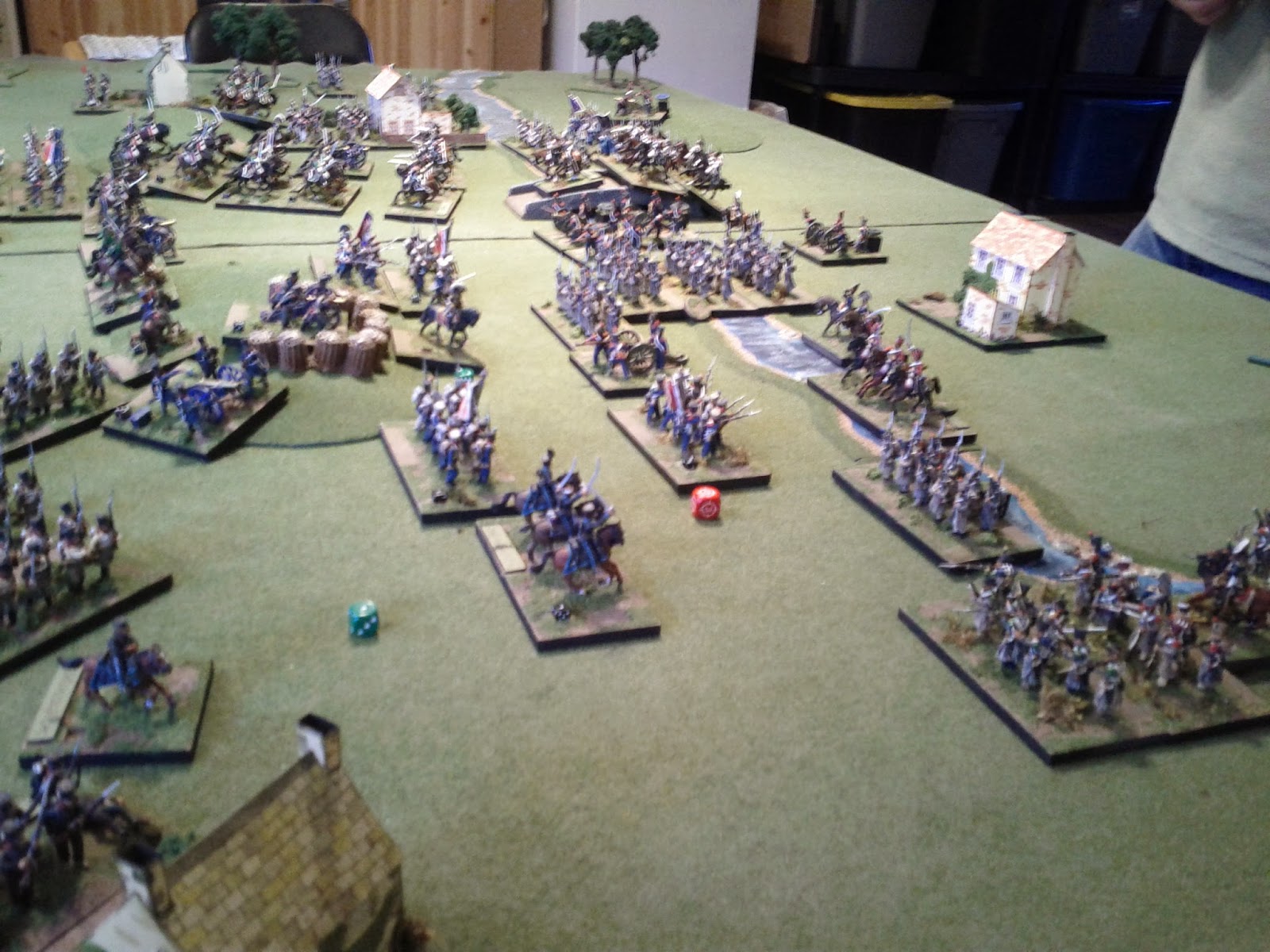 Pic from the other side taken a turn later. We can see the Royalists are drawing back. The cavalry is done to a single point of strength. One of the infantry has been successful in dispersing an enemy unit but it is also done to 1 point. Some unit losses are imminent. 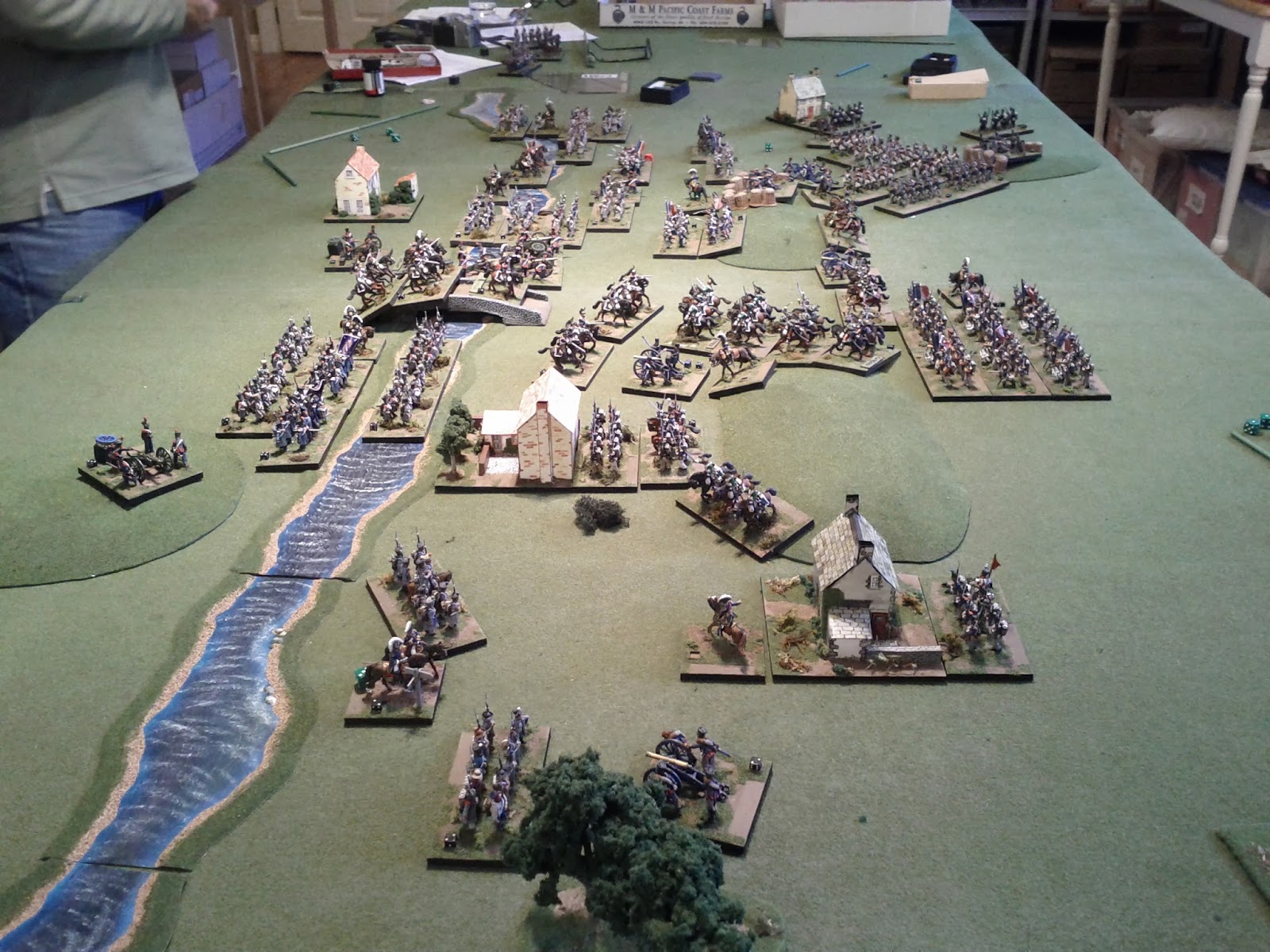 The entire line is not hotly engaged. The Bonapartist reserve is moving foward (just below the bridge on the left). Note the limbered artillery on the left hill (the blue wheel is a marker to indicate limbered status). This unit limbered up quite early, and then there wasn't excess pips to move/unlimber due to the action across the stream. It could have been very effective bombarding the village for the duration of the game. Unfortunately the reserve will now need to clear the town.

The Royalists have started moving one reserve to the front (the top right mass of troops located between 2 hills). Dust has been spotted in the air from Napoleons approach on the top/North/Right flank. Large numbers of unopposed troops have crossed the stream and the command facing them is fairly depleted.

Napoleons will arrive on turn 2d6. It is approximately turn 7 (3.5 hours into the game) and his appearance is expected any time now. With the line engaged and reserves moving up the rupture point could well be developing. The guard would ideally make an appearance any time now...