My second day at the 2014 trumper salute I hit one of the games that has been on my list to try for a number of months, Battletech Alpha strike. One of my gaming friends, Brian, and I have been playing Battletech on and off for the last year. It's quite fun with small numbers of mechs and we were getting in some of the Sword and Dragon campaign book battles in. Unfortunately he have now hit the point where the number of mechs required has jumped from 4 to a side to 6 to 8. These are also weighted towards heavier mechs. The small battles consume our time allotment, and neither of us are in a position to leave the game set up for long enough to finish it a week plus later.

Alpha strike has been touted as a fast play version of Battletech. The scenario set up was two clans forcing fighting for some esoteric point of honour. I'm not up on the fluff, and I suspect our tactics of focus fire violated the warrior ethic, but meh, it's a demo game.

One of the big pluses in my mind is that the range bands of mechs have been set are regular distances 0-6, 6-24, 24+. The damages from all weapons are subsumed into a single damage value delivered in each range band (which can vary). I.e a mech could do 2/3/1 over the short/med/long range. Overheating allows for boosting damage at the cost of speed AND a to hit penalty. If you don't fire or are in a lake you get to reduce your heat total (which ranges from 0-3).

Also very convenient, and definitely a step of abstraction, is that the to hit modifiers for movement of the target are based on their top speed. You ALWAYS get the modifier unless you specifically go stationary (as opposed to not moving where you are considered to scuttle around a bit, but don't move meaningful distance). Stationary figs get a bonus to hit what they shoot at; bit of a risk/reward option there.

Damage is abstracted to armour and structure boxes. Once you start taking structure hits you roll for possible criticals (which are very likely, though not guaranteed). CASE still protects against ammo explosions. There are a number of special abilities which reflect various equipment, and sometimes weapon loadouts (ENE means the mech uses only/mostly energy weapons so is immue to blowing up from an ammo hit). 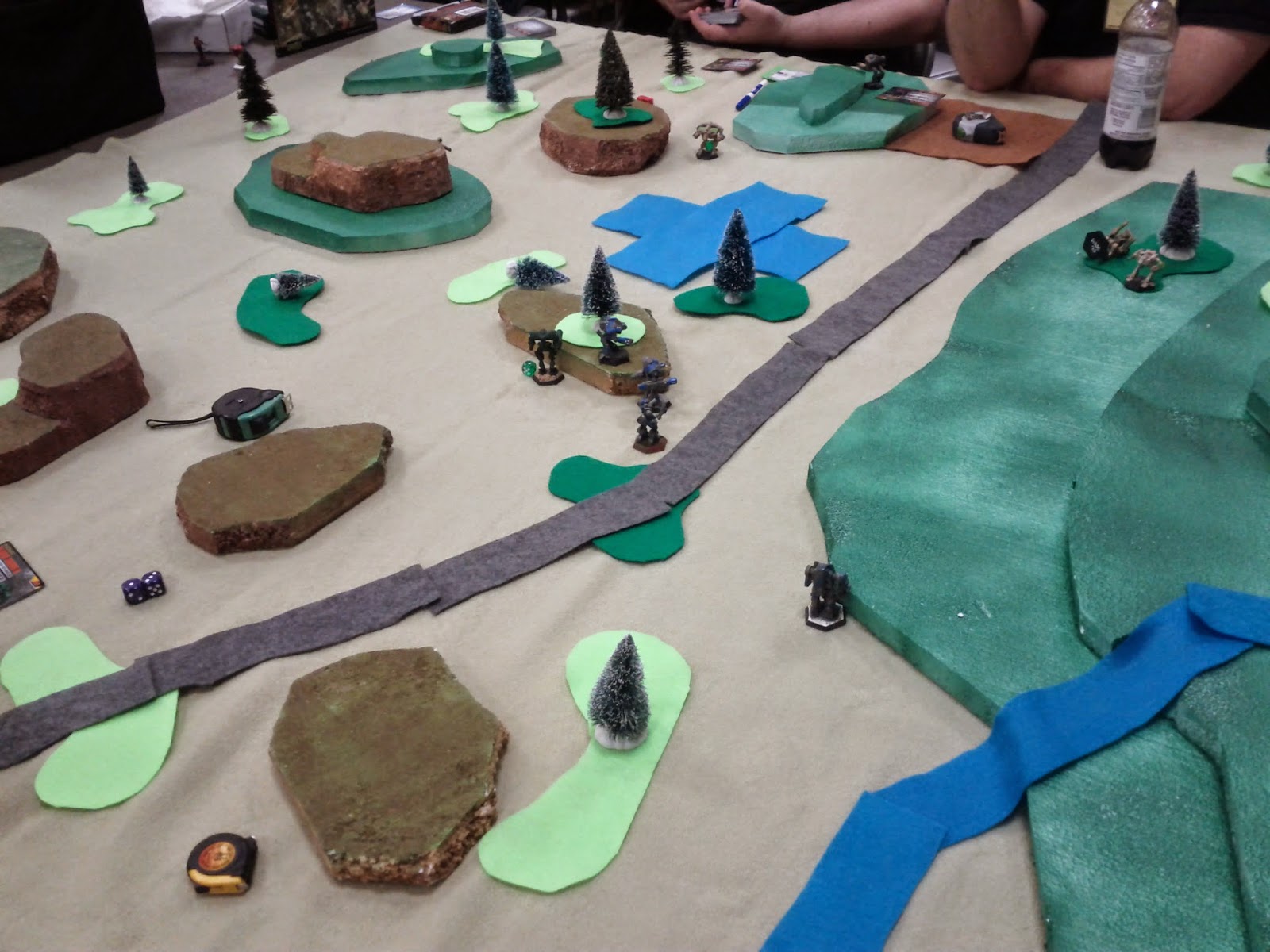 I missed taking shots for the couple turns of the game. I forgot and it played quite fast. Our force of 5 mechs kept to the centre and advanced under the cover of the hill. In the distance we see 2 mechs at 12 oclock which are the heavy scary mechs (a dire wolf and something i forget but was roughly described as the scariest mech there is). Meanwhile we traded shots with the mechs on the rise to the right. The smaller fast scout mech was basically impossible to hit and was needling damage off us. The larger mech I think got cocky and moved up beside it. 4 mechs that couldn't hit the scout decided to shift targets and quickly gave us our first kill. 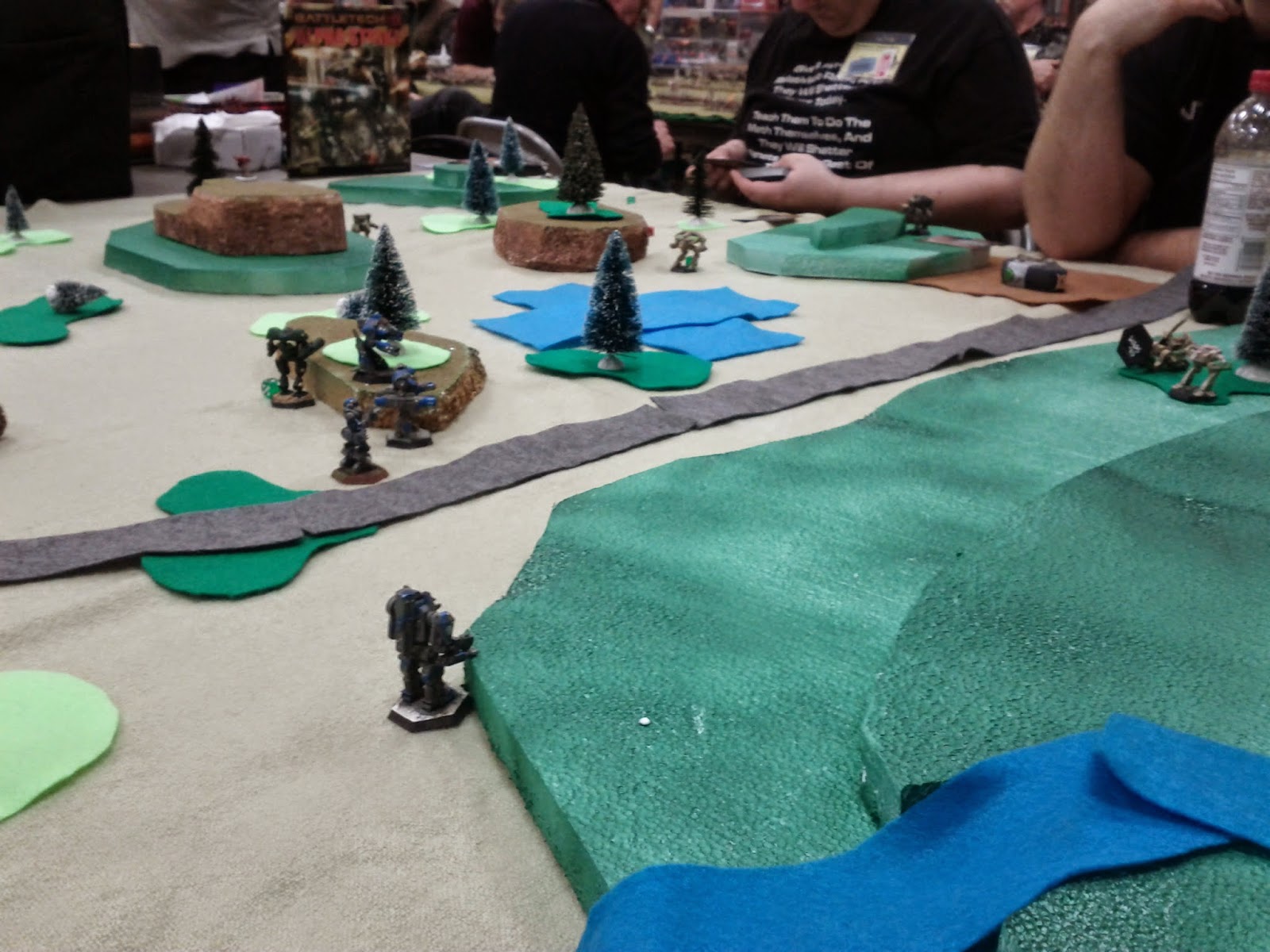 Another angle of the same turn I believe. 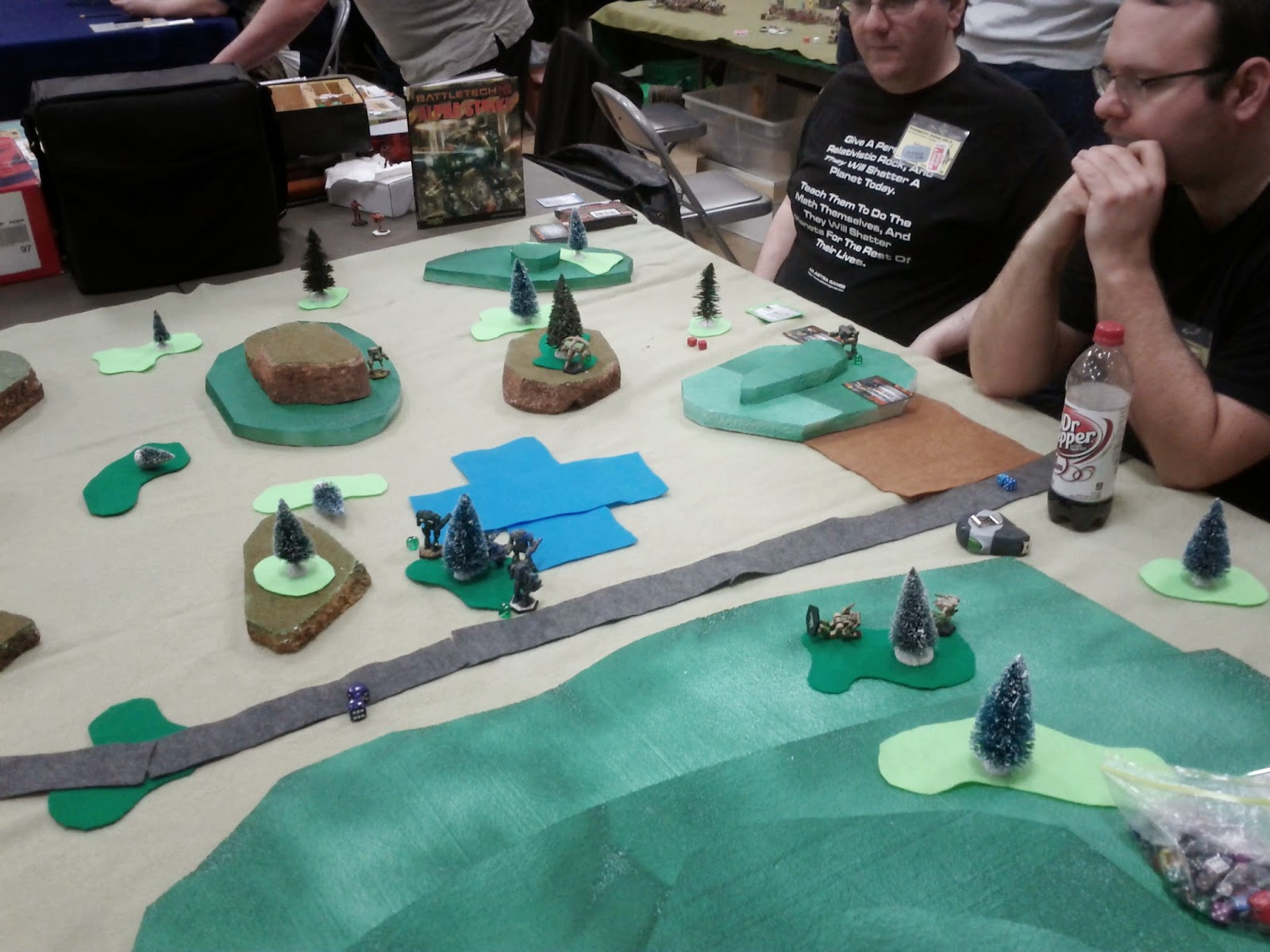 We continued to push forward over the hill and through the forest. I believe one of our mechs went down, tying the game, but we quickly iced the ?Mad cat? at 1100 oclock hiding behind the brown mesa on green hill.

My fellow gamer moved his mech into the water of the x lake (so known because it's easy to cross *rimshot* hehehe). This way he boosted the power of his shots every turn with overheating. Meanwhile the two scary mechs (Direwolf hiding behind the green hill at 2 oclock). were paring us down steadily. One of my own mechs was a couple points from being destroyed and I have no idea why none of our opponents thought to do it. They seemed fixated on the other mechs for some reason, despite being told it had no armour. A mistake that would cost them. 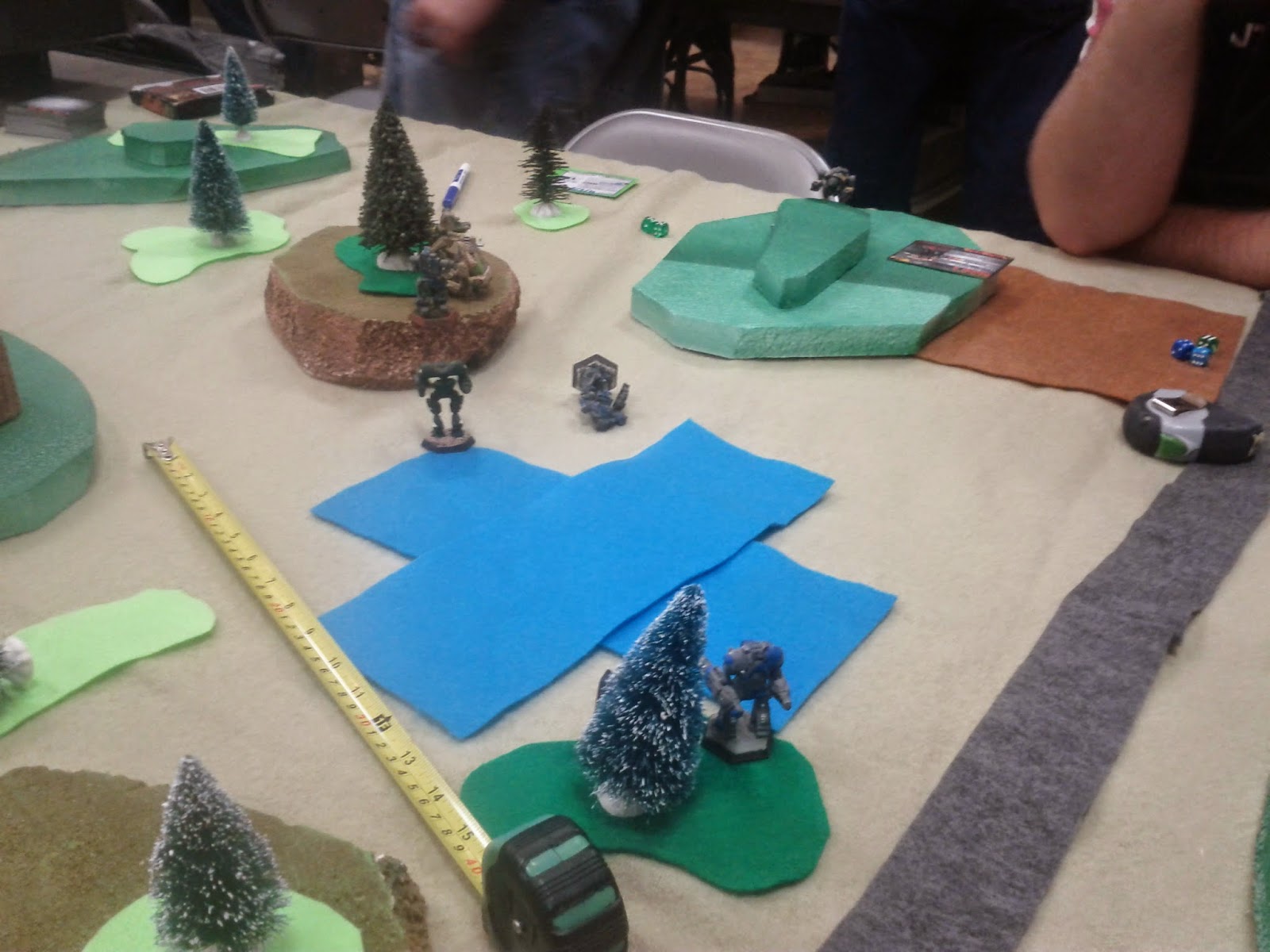 We rush forward (although my crippled mech continues to hide in the trees) and assassinate the 'scariest mech'. The now open shot from the direwolf destroys my mech with a lucky critical. We are now 3 vs 2 mechs. The Thor and the Gyr hawk rush the direwolf, ignoring the lighter enemy mech that came up to support mr scary. 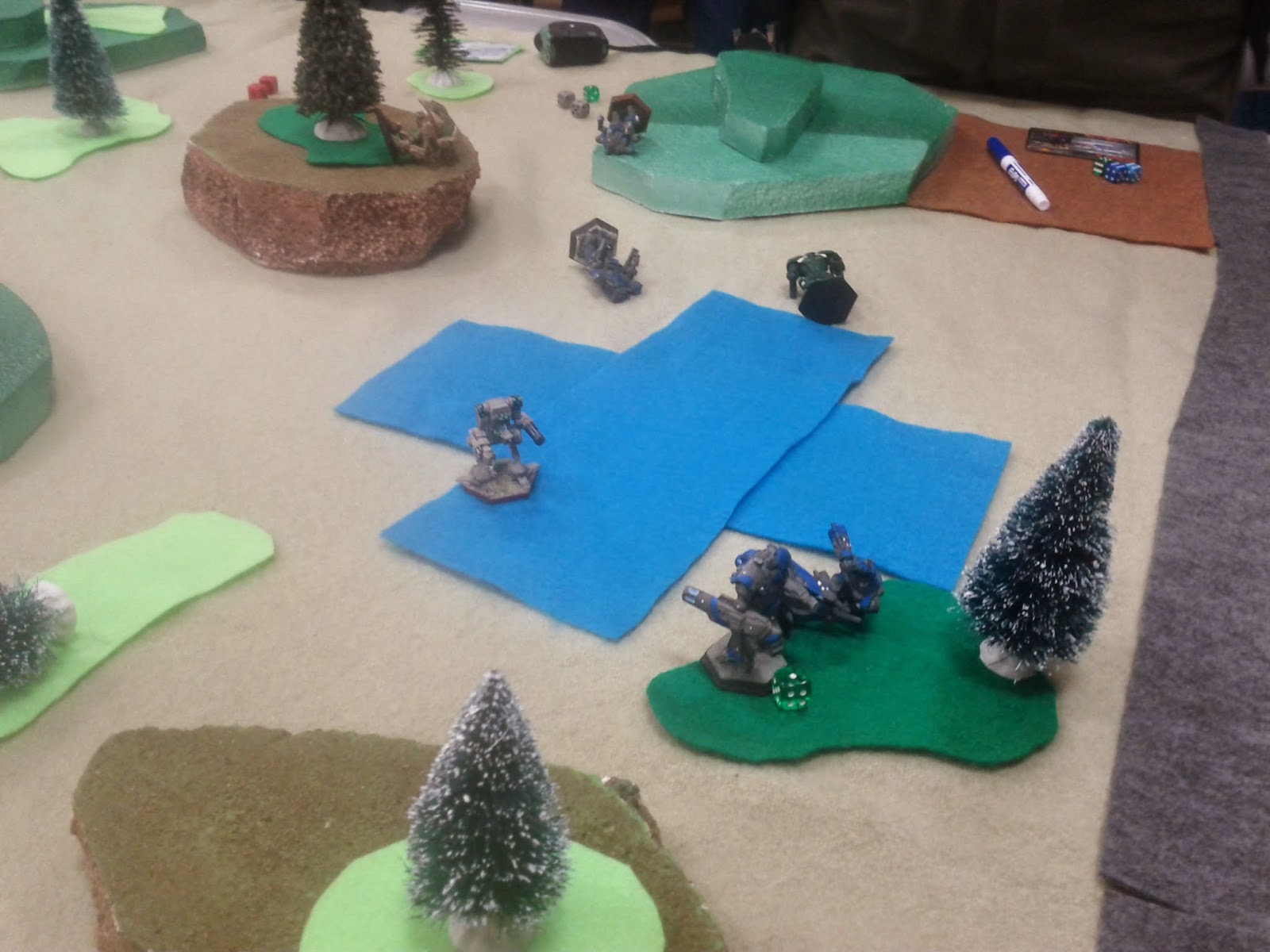 The direwolf was successfully killed, but the gyrhawk and thor were killed shortly after by the damage the direwolf did (shooting I believe is simultaneous) and the lighter mech (name escapes me). At this point my crippled mech is hiding in the woods trying to hit the damned fast mech racing towards him. 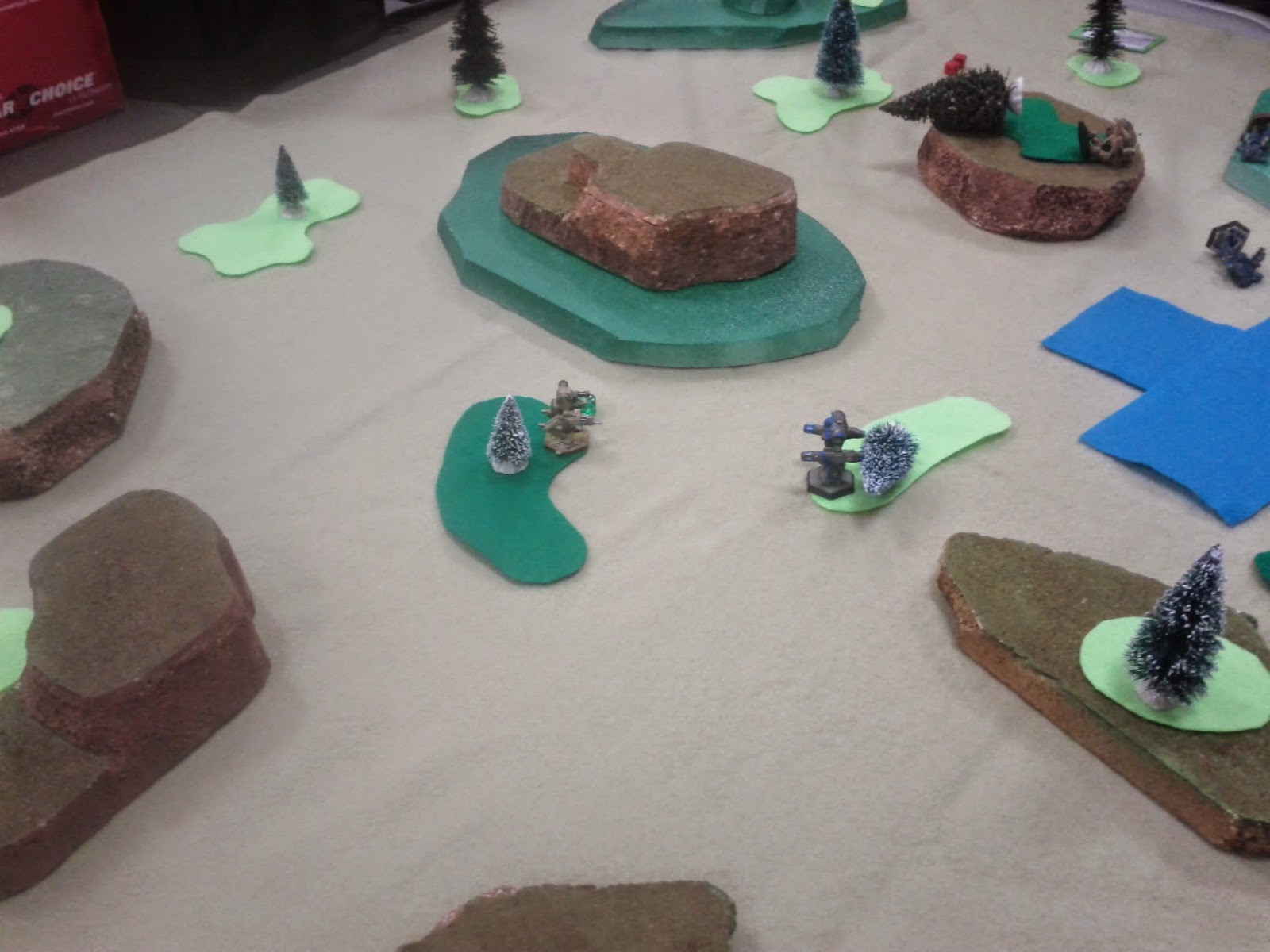 What follows is a comedy of errors as the two mechs swap initiative back and forth and scuttle around for FIVE turns unable to roll the mediocre numbers needed to hit their opponent and finish them off (both were one hit from dying). On the last turn I go stationary, get the kill, and suffer a kill in turn. A TIE! How wonderful. I'm pretty sure the other players were getting a bit irritated waiting for the resolution, but all stayed around as it just didn't take very long to play the 5 turns (1-2 minutes a turn I'd guess). This in my mind is pretty high praise indeed.

The whole game took 1.5 - 2 hours I'm guessing. This included some explanations, some drooling and staring at mini's deciding what to do and who takes what, etc etc. I think if everyone had been considering what they were going to move next while the opponents moved and rolling faster it could have gone 25% faster. Zoom zoom!

I was sufficiently happy with the system to pick up the rulebook at trumpeter. While you can order the 'ad hoc' cards off rpgnet, which are about 40 mechs on nicely printed cards, all the stats for every mech is on the Master unit list (both for classic as well as alpha strike). It's unfortunate there isn't an easier way to print them , but they came as jpegs, so some sort of graphics program to resize and get more than one on a sheet of paper is necessary for the time being.