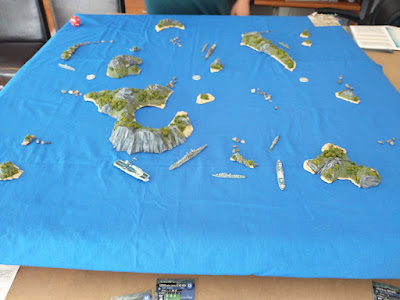 After six months of silence I managed to get a post done....and a game AAR at that. Local gamer Garret has been quietly collecting the (mostly?) defunct game War at Sea. I imagine you can pick up a good set of minis for reasonable prices. While not my favorite style of game (each ship has it's own card with different values/rules) it does keep the bespoke rule craziness to a modest level. 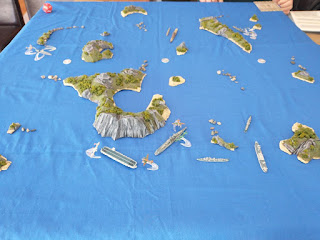 One of the big drivers was the ability to hammer out a game VERY quickly (important when we both have 2 children under 4!). I think this one took about 90 minutes with learning for me. Garret has a useful little computer program that has a database of his available gear and will wizard up lists. He made two reasonably balanced ones....An american fleet with a cruiser, aircraft carrier, and 2 destroyers (plus planes), and a japanese one with 2 destroyers, a heavy cruiser, a sub, and a heap of air. 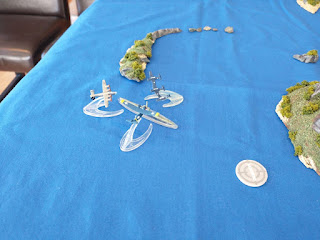 Objective is to seize the 3 white objectives on the midline, and/or destroy your enemy. Victory is sorta sudden death as when you hit a certain VP total you win (I suspect at the end of the turn). I was VERY concerned about the japanese sub to the Northwest so swarmed it with planes dropping depth charges. Unfortunately the amount of fighters I had to bombers was....unbalanced, so the japanese were able to sink my carrier in the first turn. Yikes! 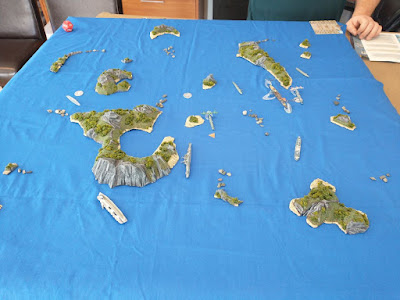 Land bases were the only thing keeping the aircraft up, which now means they come ever second turn in the absence of special rules (some bombers with larger fuel and bomb loads can 'loiter' and stay on station without needing to reload each turn).

The second turn we both kept as much aircraft in play as possible and continued to hammer the ships. I decided to focus reducing the number of targets so ignored his cruiser in favor of killing destroyers (which carry torpedoes which are pretty swingy in this game but do heaps of damage). 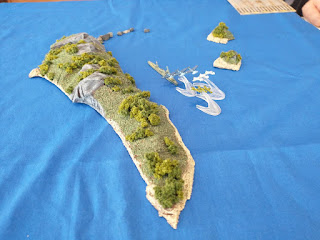 We were rapidly reaching a point where all we had were one or two crippled ships and far too many bombers for any sailors health.

The one turn of naval gunner and torpedos saw my cruiser and one (of two) destroyers go down, but cleared the table. The final turn the japanese continued to struggle for the draw to kill my final destroyer before it could claim a VP point. It narrowly avoided the angry wrath of the japanese bomber force to pull out a win.

A fun beer and pretzel type game that you can hammer out a couple of games in a session. I feel that it's obvious you need more fighters but Garret makes it sound as though there is a tricky element of balancing various needs without leaving yourself catastrophically open to certain attacks. 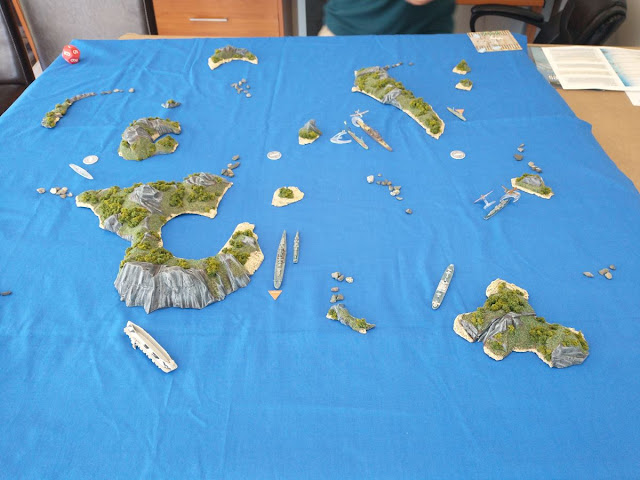