Meanwhile, away from Waterloo.... (Battle of Souffel) pt 1

Despite a drought of posts and gaming, Doug once again was available for some gaming with his (& Seth's) still under development rule set. I've spoken at length about the rules in other posts, but roughly speaking each stand of troops is numerous brigades, if you fail to destroy your opponent during combat (which is all base to base contact) each side will suffer attrition (though won't disappear from it), and everyone moves the same distance. Cavalry has a higher inherent combat strength, but less damage points, combat modifiers are minimized, and the dice rolled are weird (0,0,0,1,2,3 valued). Moving troops requires command pips and the costs are doubled outside of a command range. 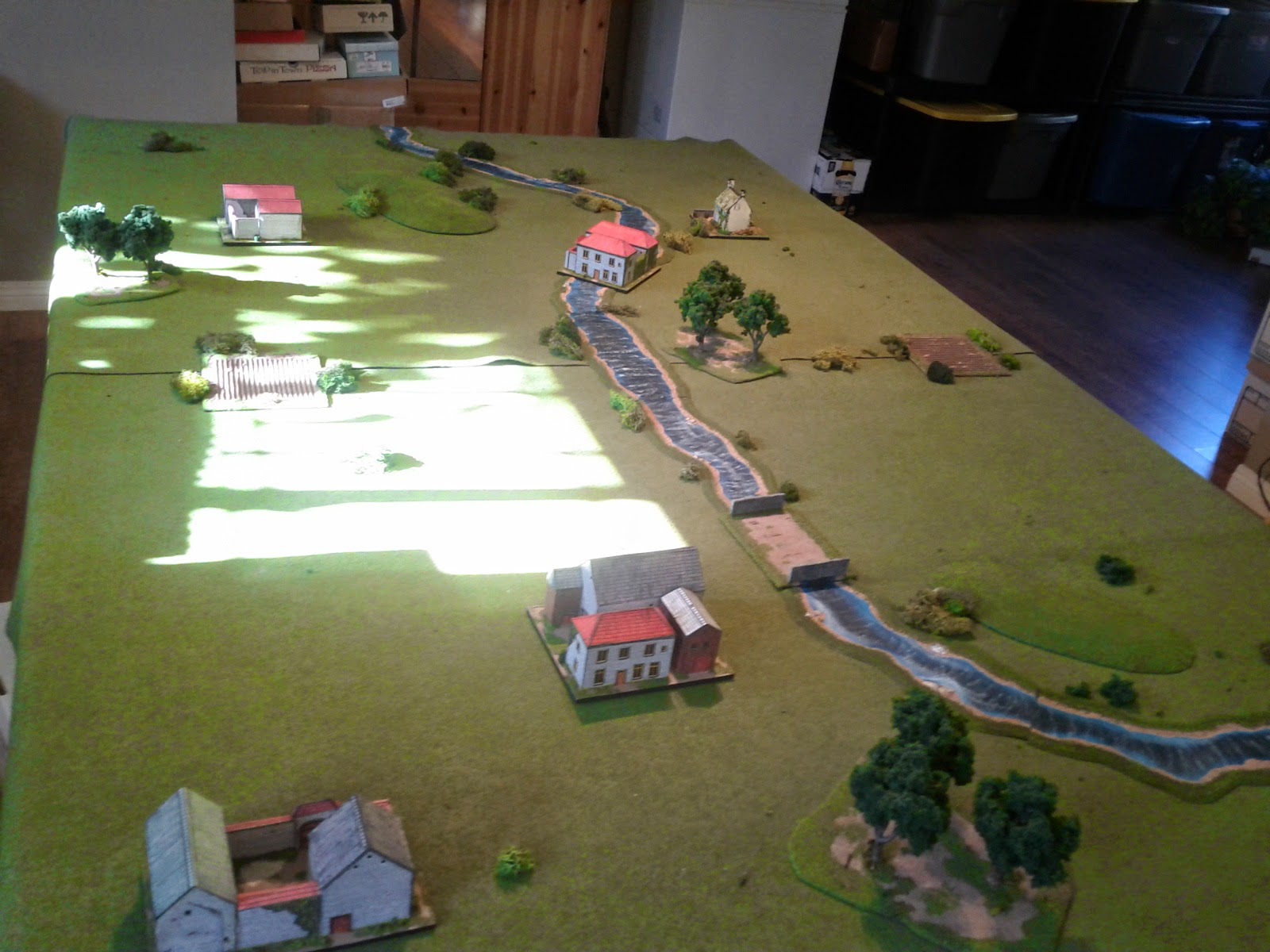 In honour of the Battle at Waterloo, we decided to play a less known battle on the Eastern French border, where the French general Rapp was fighting a delaying action against other armies of the coalition, while the Emperor went to kick some ass up near Brussels. The objectives for both sides is to hold the villages on the west side of the river (left side), and to minimize your own casualties while maximizing the opponents. As the French player I wasn't briefed on the actual battle and wouldn't have known much about it anyway. I knew the coalition armies were attacking, and there was every possibility that reinforcements could appear on my left flank on this side of the river. I set up my forces to account for this, but needed to ensure that access to my lines of communication (on the right flank) were intact at the end of battle. An interesting set up over a wide field. There were 2 obvious fords (one incredibly wide bridge, the other a town), but I was suspicious other fords might appear during the game. 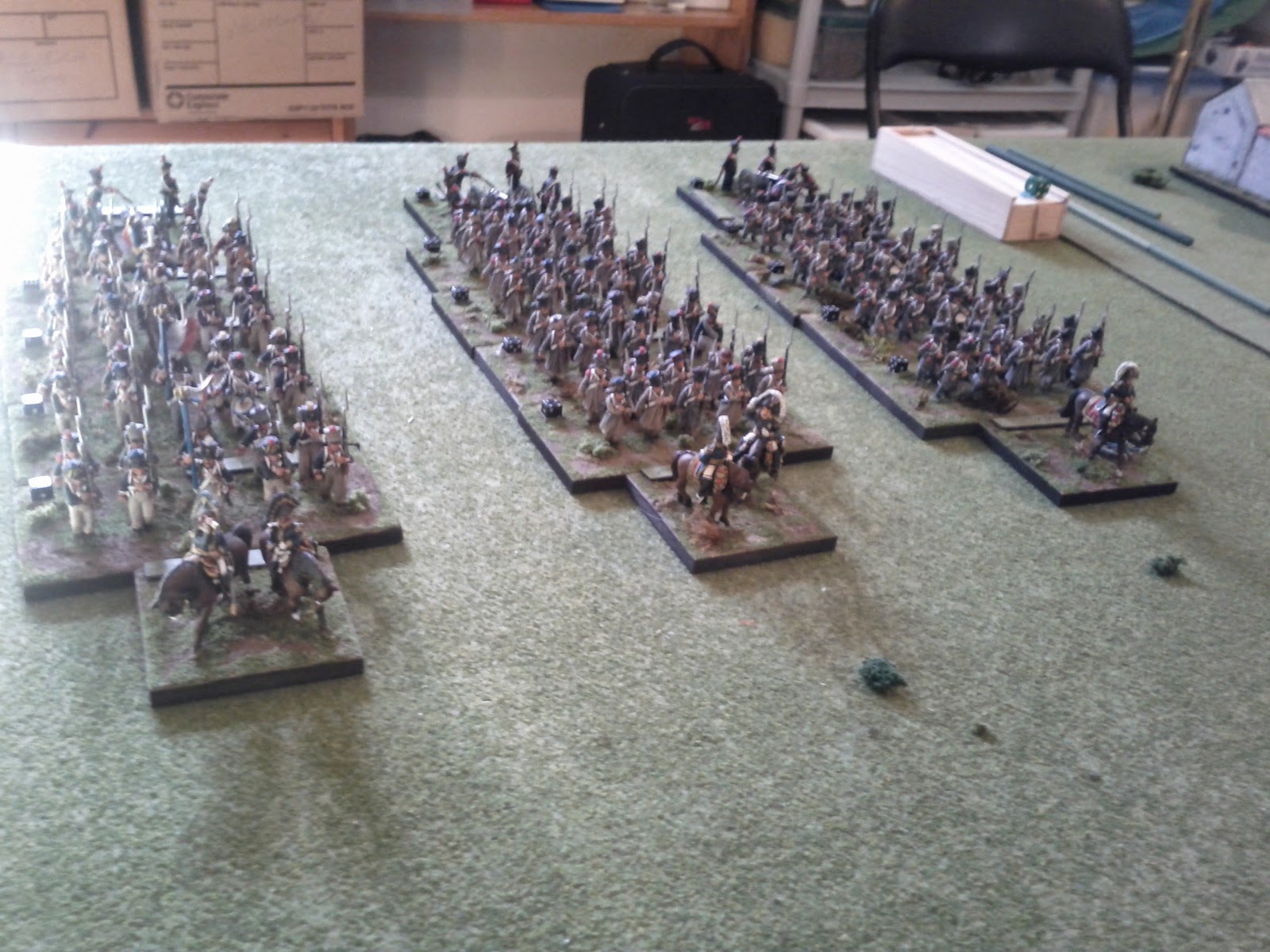 Most of my command to the left. The sun streaming through the windows made some photos not turn out, so we miss seeing the cavalry command, a unit of dragon, hussar, and horse artillery (which has shortened range).

As typical, Doug had hidden my opposition in some other boxes, but I surmised I'd be facing a lot of enemies due to the nature of the river crossing and the historical context (holding action while Napoleon had taken most of the troops). 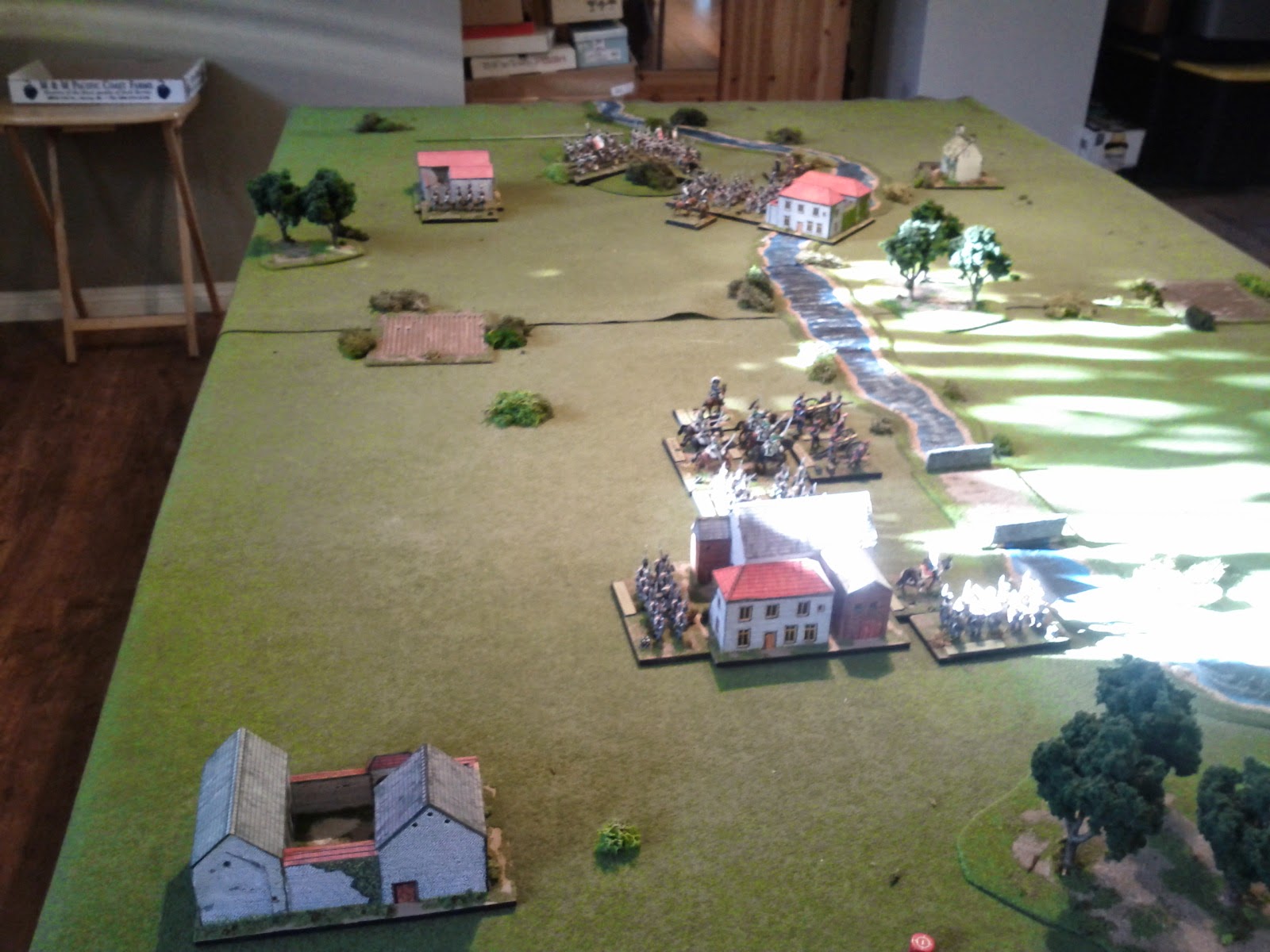 With my blind setup I deploy one infantry group, and the cavalry on the southern crossing, carefully trying to setup a killing zone that cannon can rake and my troops can charge any bridge head. 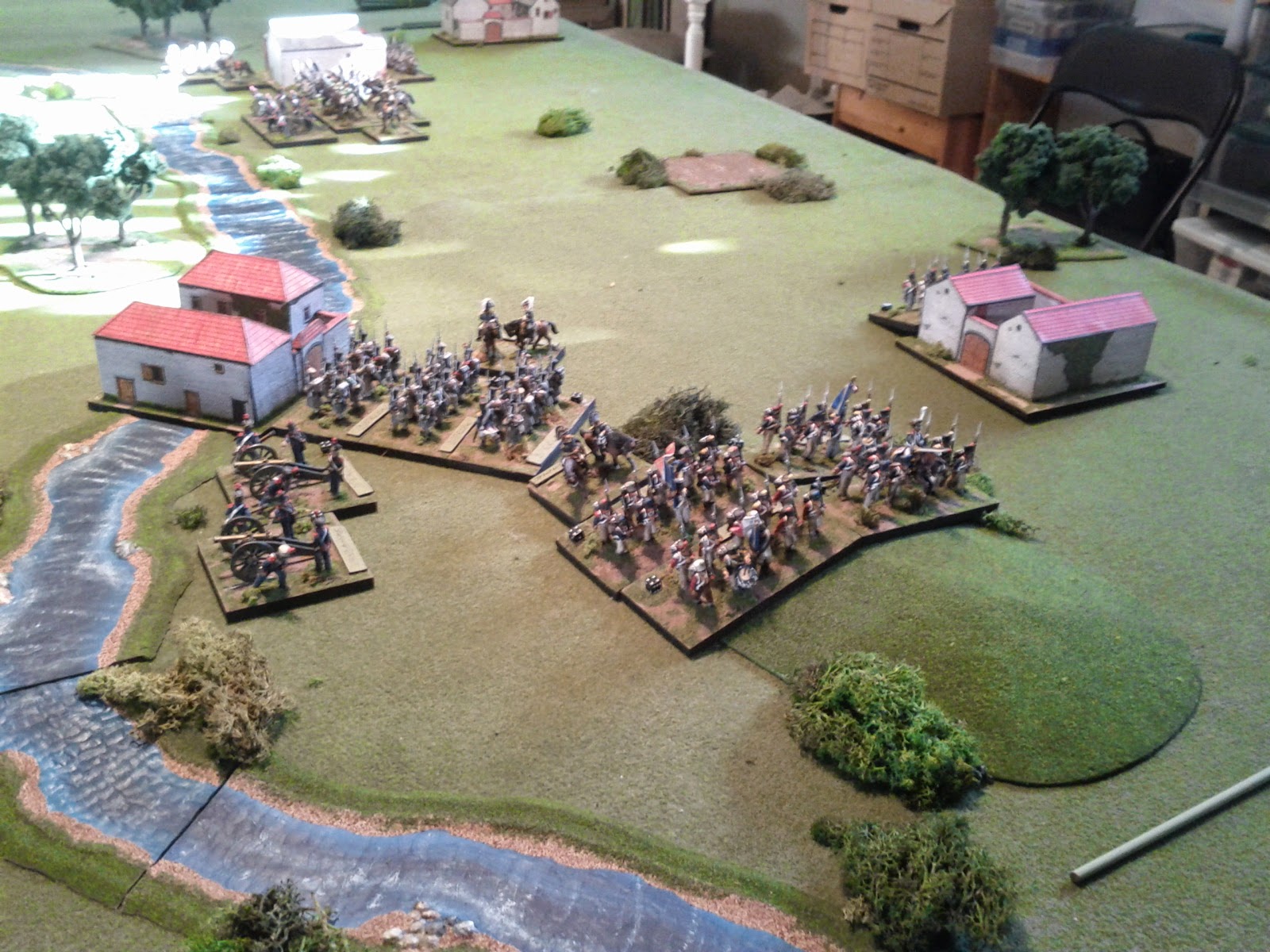 The northern part (french left flank) gets one full infantry command defending the town. The towns, as expected, get a wicked defensive bonus, so it just doesn't make sense not to garrison them strongly. The conga line will move in (hopefully) as the garrison is depleted.

The other command takes to the hill to guard my left flank from any tricksters that can find off map crossings.

The artillery is taken from both commands to cover the approaches to the town. 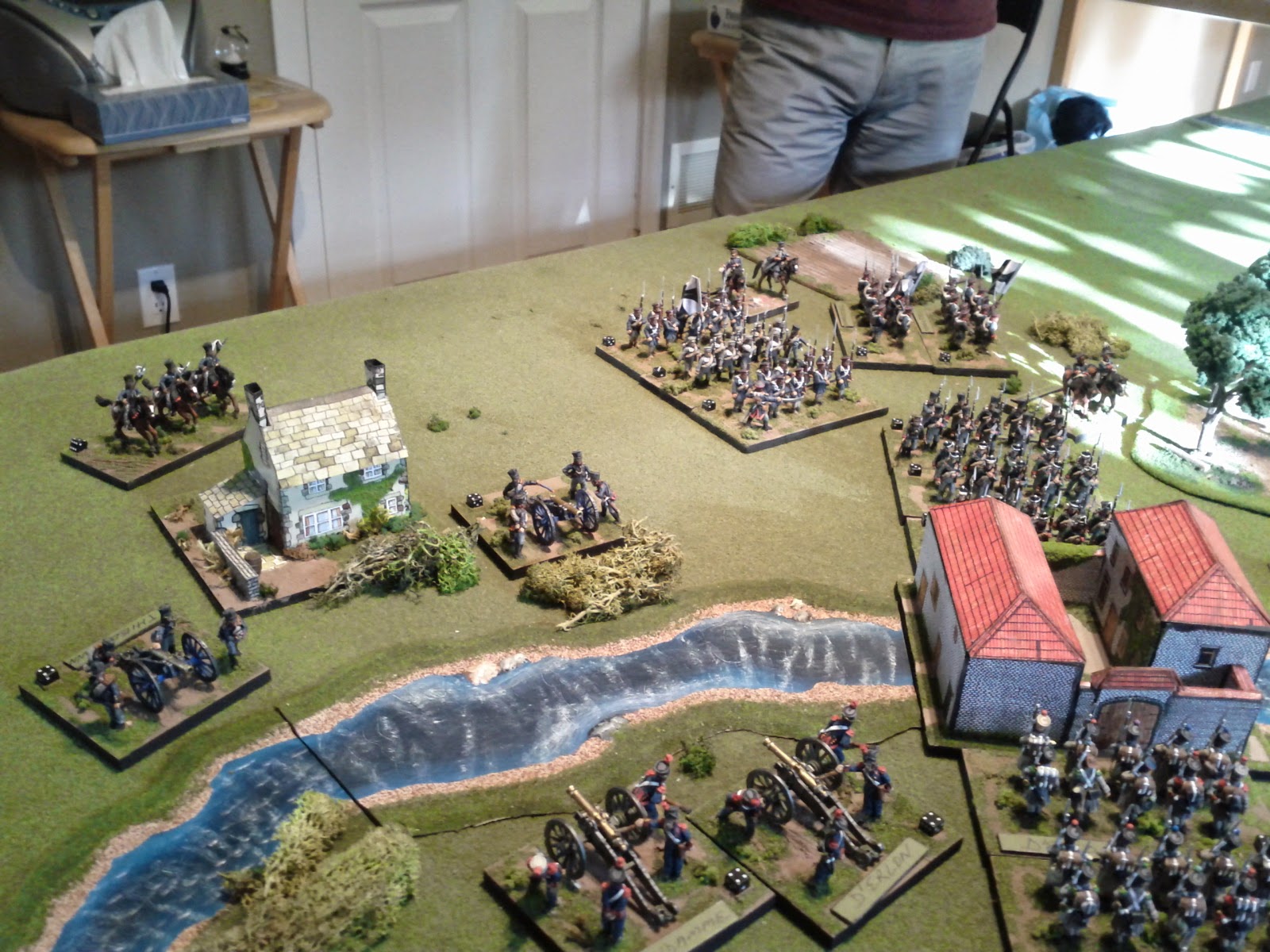 One thing I forgot about Doug's scenarios is he a strong advocate of reducing time consumed in manuevering. Armies start in near contact for immediate action. It's a solid formula for getting to completion of a game within a convention block of time.

*POOF* My enemies are at the gates already. Eek. For this performance the Prussians and British stand in for Austrians and Wurtembergers.

None of my troops move on the left flank, and the cannons engage in some ineffectual counter battery fire. 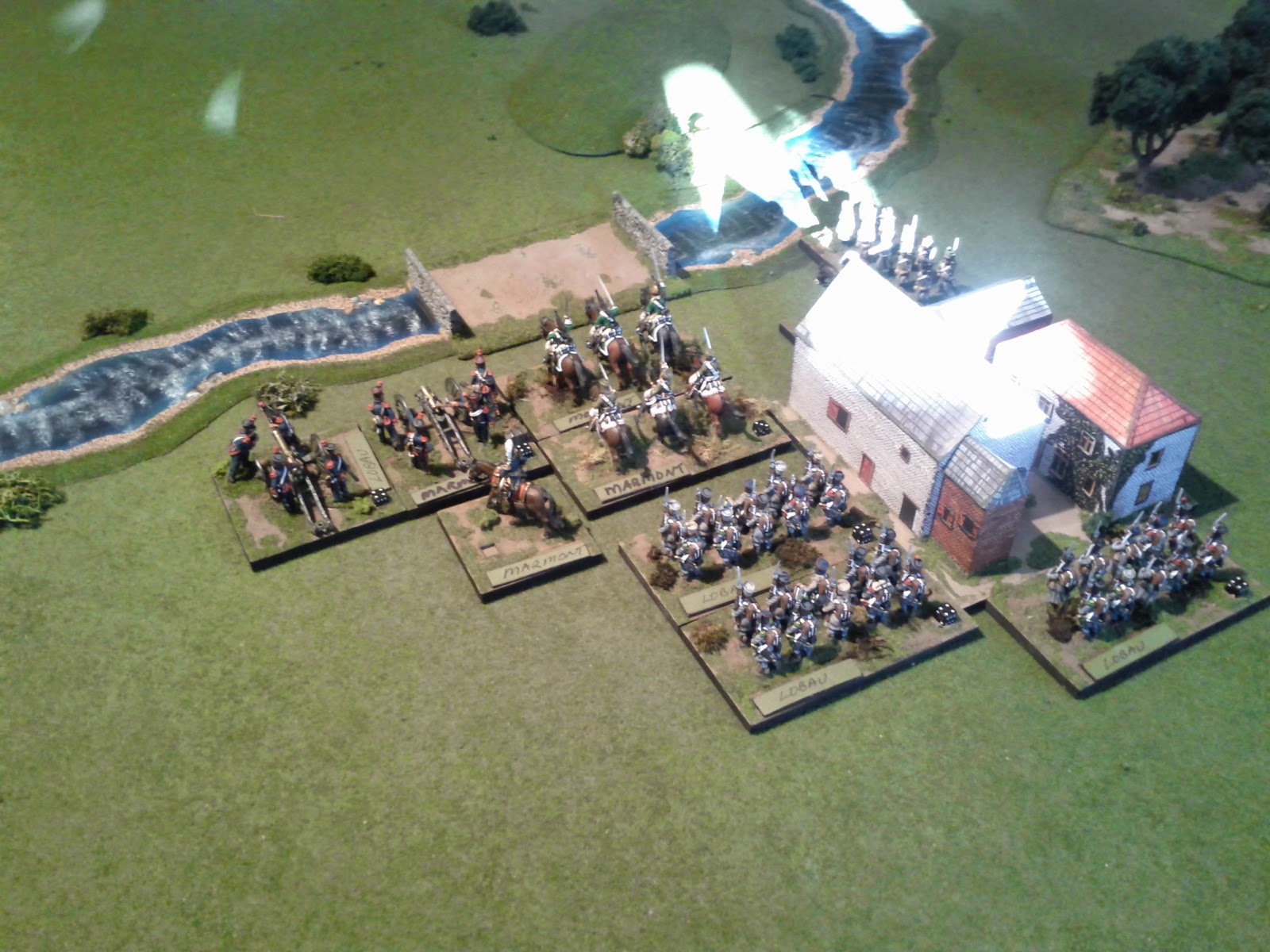 Crickets abound on the right flank. The cavalry is pushed forward with the plan to harrass the enemy and try and drag off some of the overwhelming force on my other flank. It appears that I'm facing a refused flank. 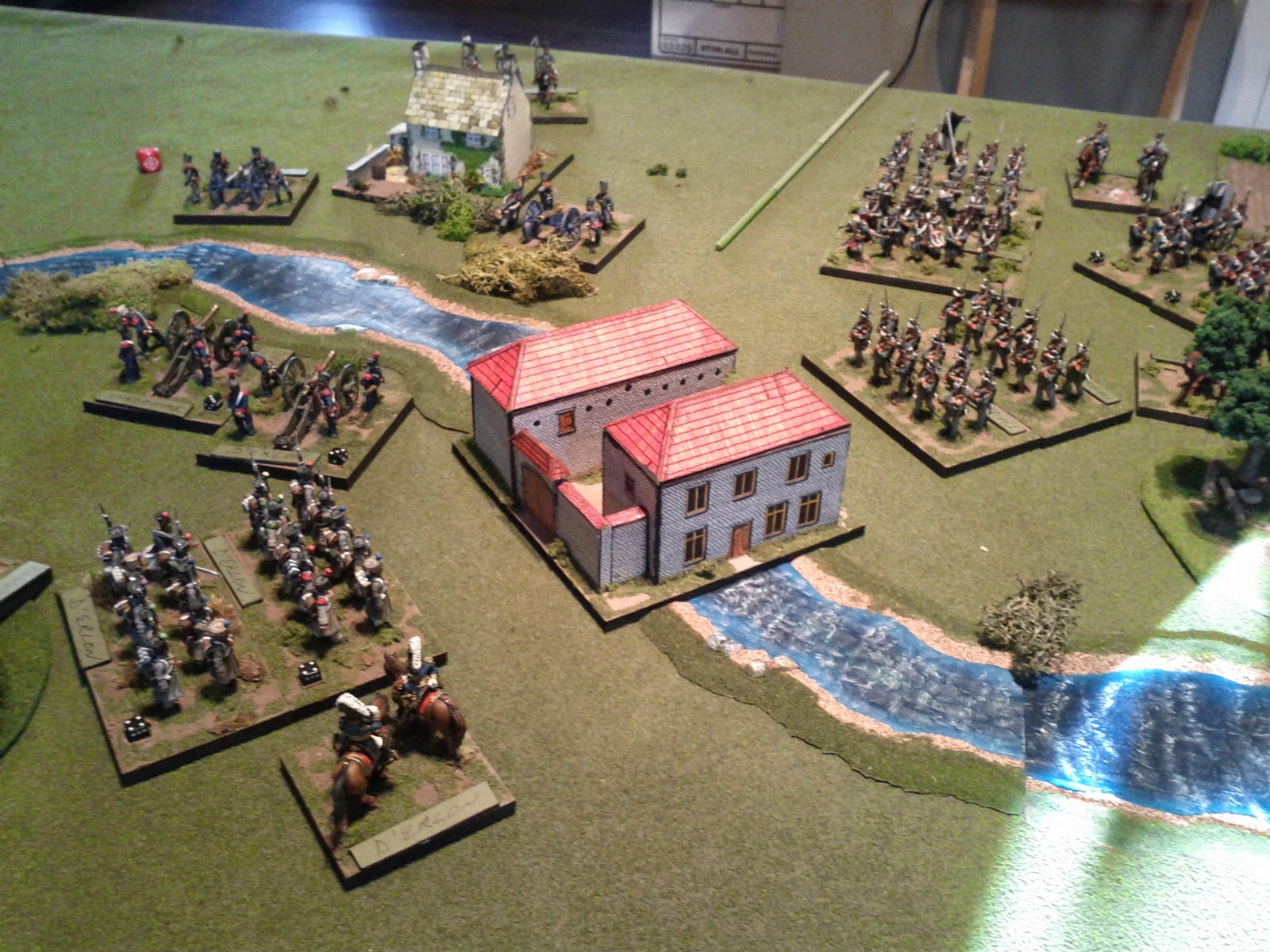 Prussian turn 1. Between cannon fire and tied combat we see the village ford empty out with dead lining the streets and stragglers streaming towards the rear. Luckily for me, the French have the next move and can re-seize the town.

The small black dice on the bases track the damage left on each base. The artillery can attrition down on a 1 in 6 after each successful attack. The artillery rules are the major thing that still is under development. At the beginning of the game, they can cannonade anything with their range (as a cannon base represents up to 6 batteries.) The idea is that the base represents a locus of activity for the cannon. Later in the game we decided to limit the number of shots taken to the remaining damage of the stand. This better represents a weakening of the ability to fire as the artillery is degraded by damage and attrition. 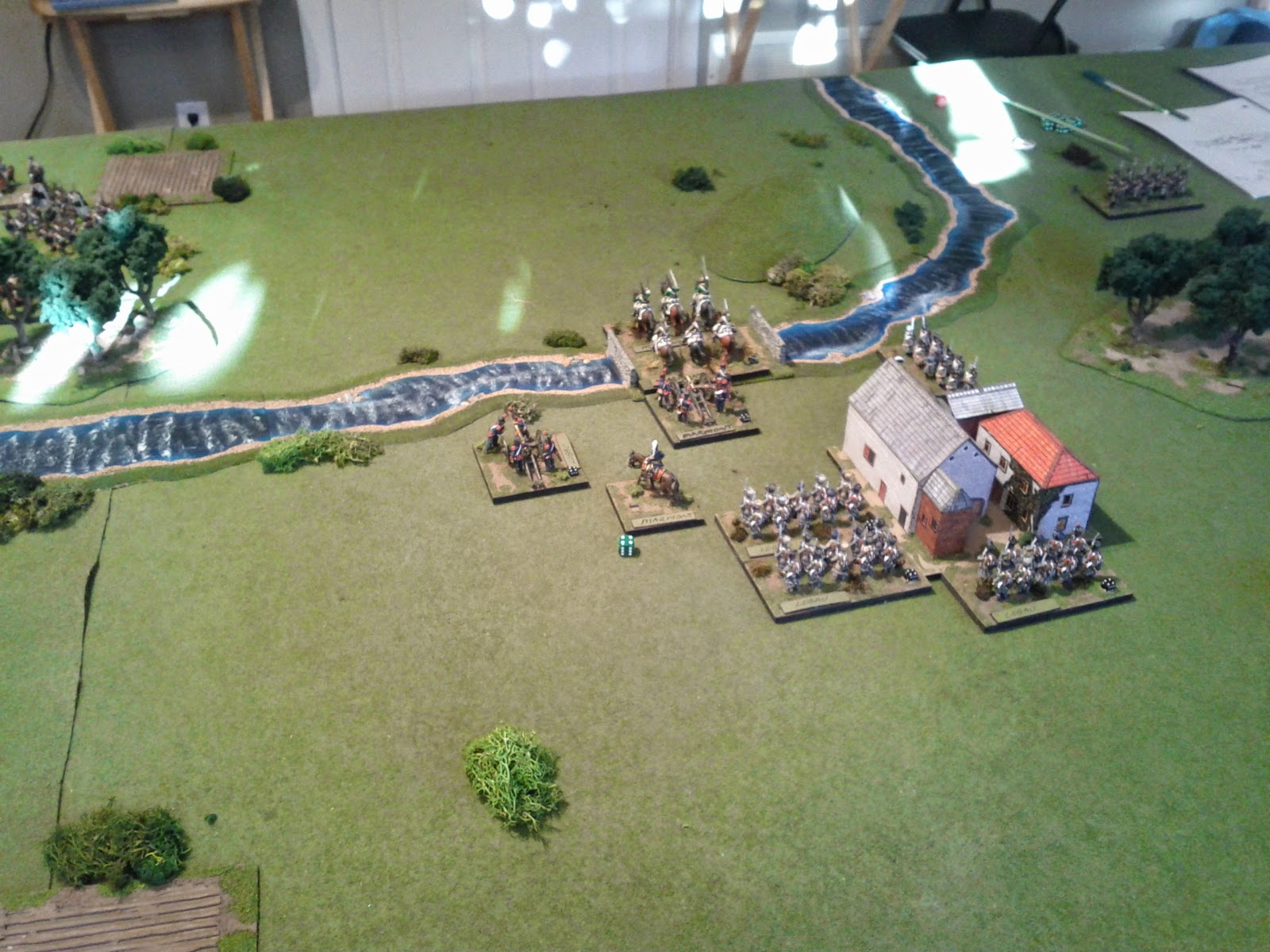 French 2. My cavalry continues to advance. They are now in base to base contact, and can be moved together for a single command pip. Horse artillery is allowed to do this with cavalry. Foot artillery can't join any formation.

Not shown is the french reoccupying the town crossing. Artillery fire continues between the french and prussian batteries with both of us damaging each others batteries (between real damage and some attrition). 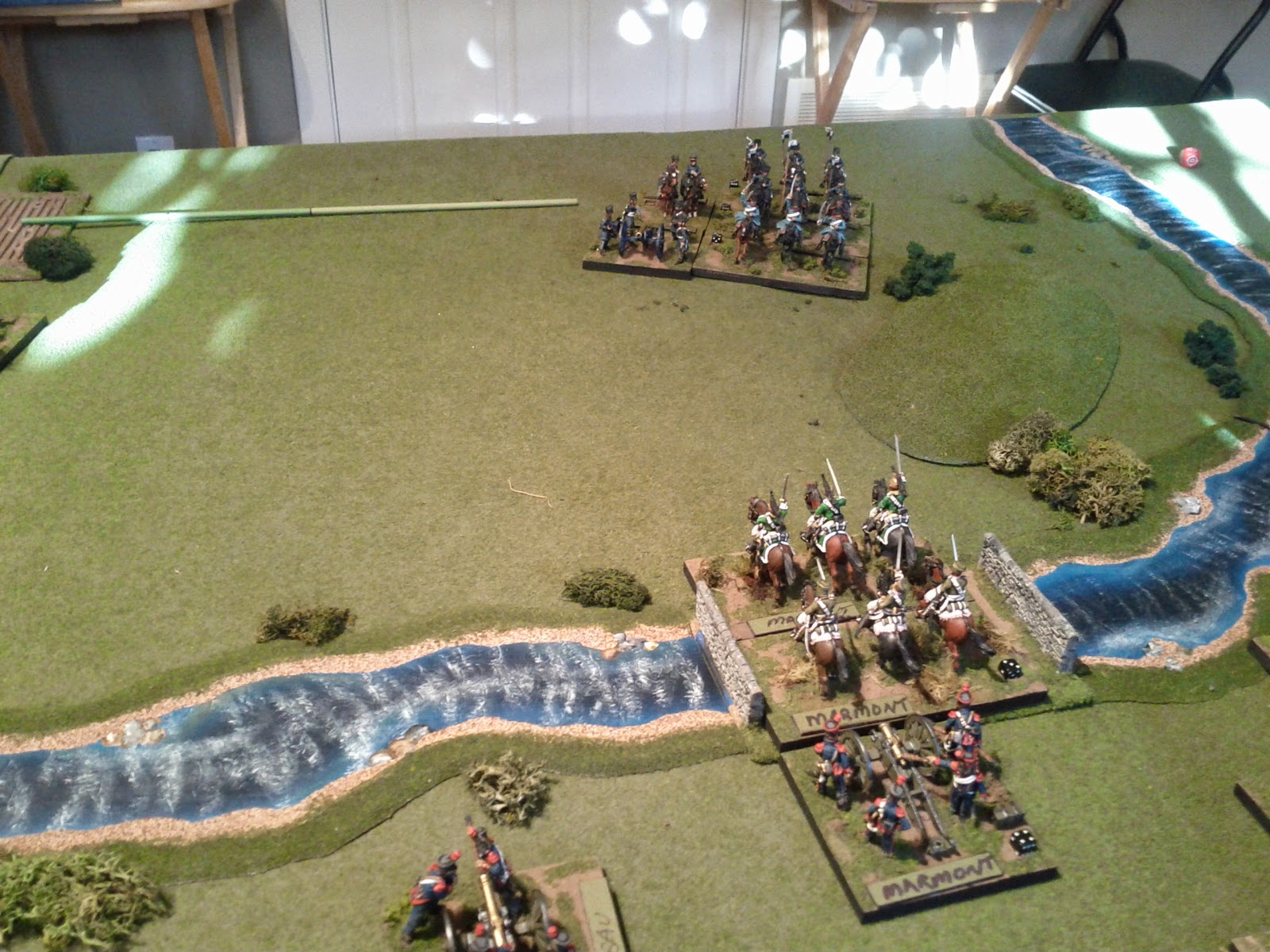 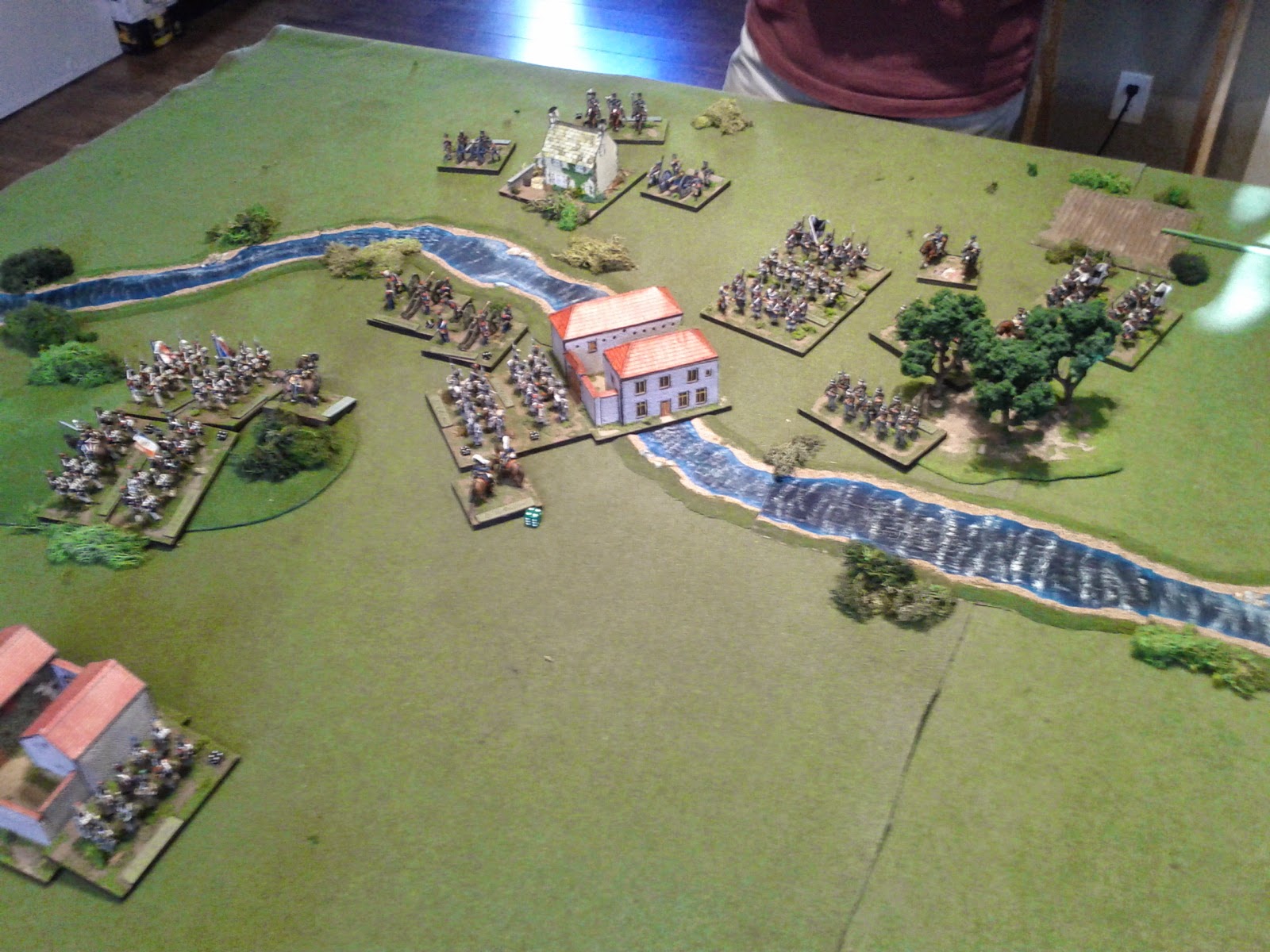 The prussian batteries withdraw, although not quite far enough to prevent more counter battery fire between sides. The column loses the fight against the french garrison and recoil a base depth. This represents the difficulty to continue to pursue the attack, you must consistently spend command pips to force the attack. 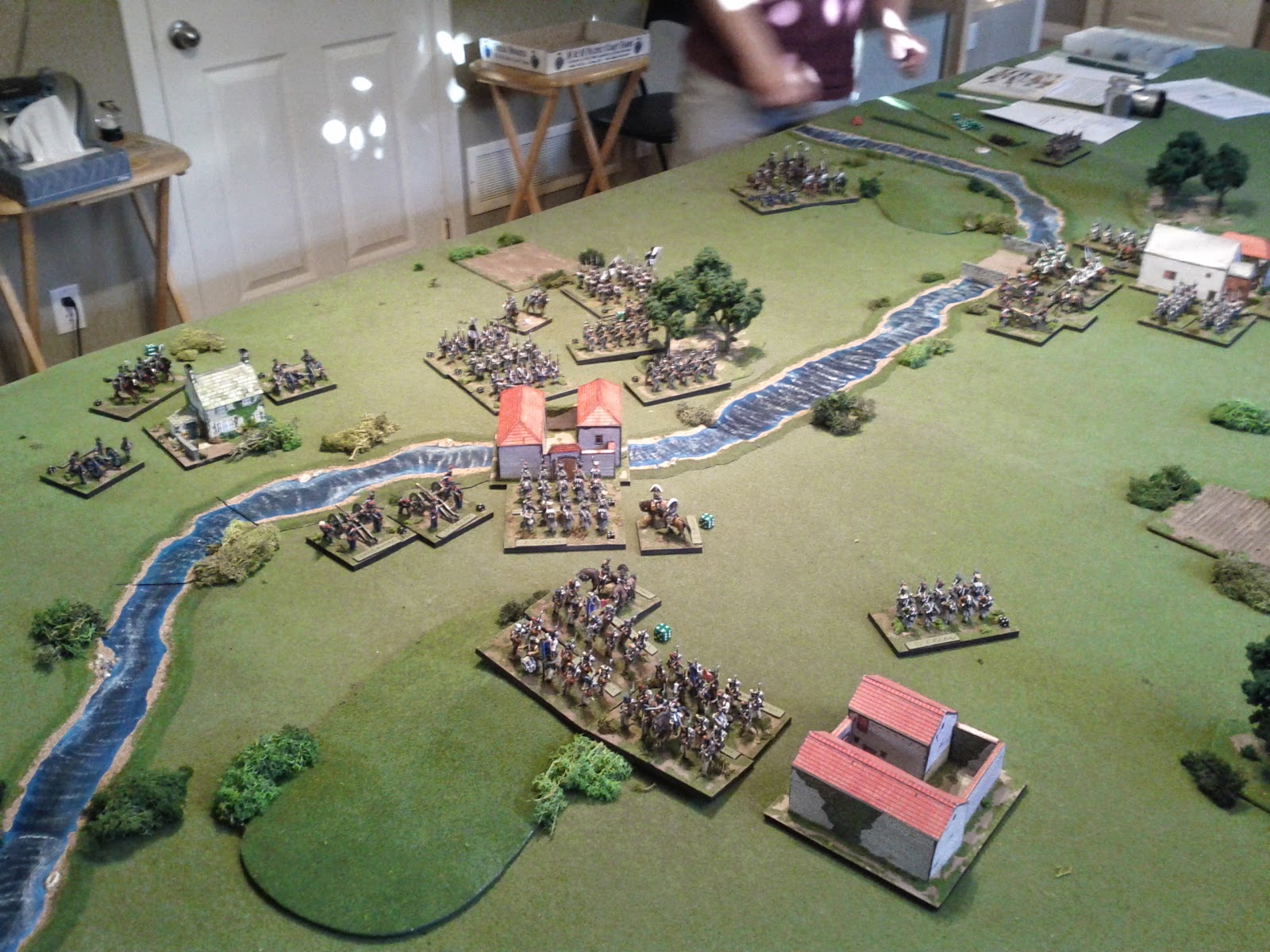 I continue to leave the command on the hill, with the expectation I may face a flanking force. They shuffle towards the town to they can take it quickly if necessary. 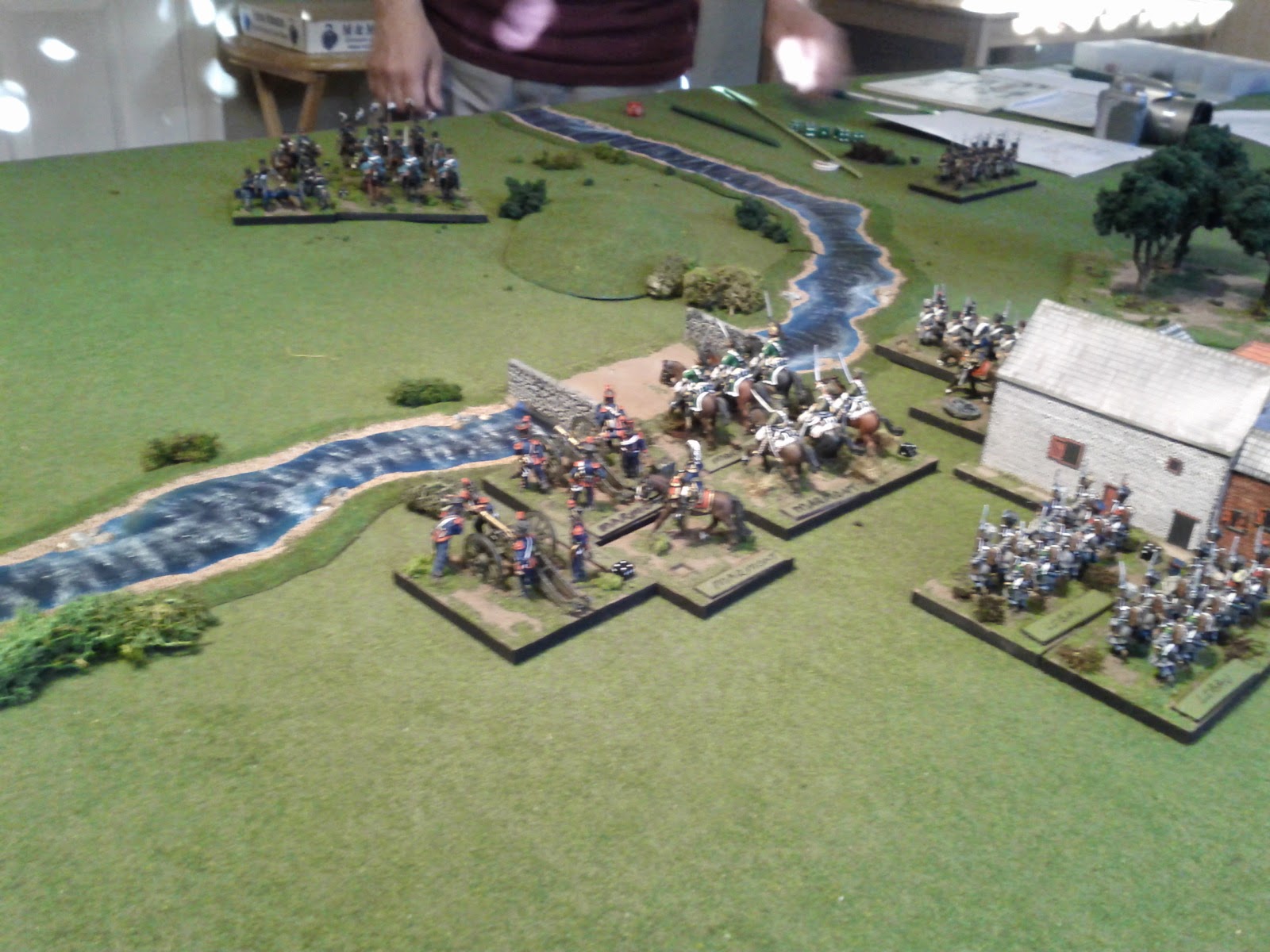 First forward, now my cavalry are racing back to the start line. My artillery moves up to harass anyone coming close to the bridge. 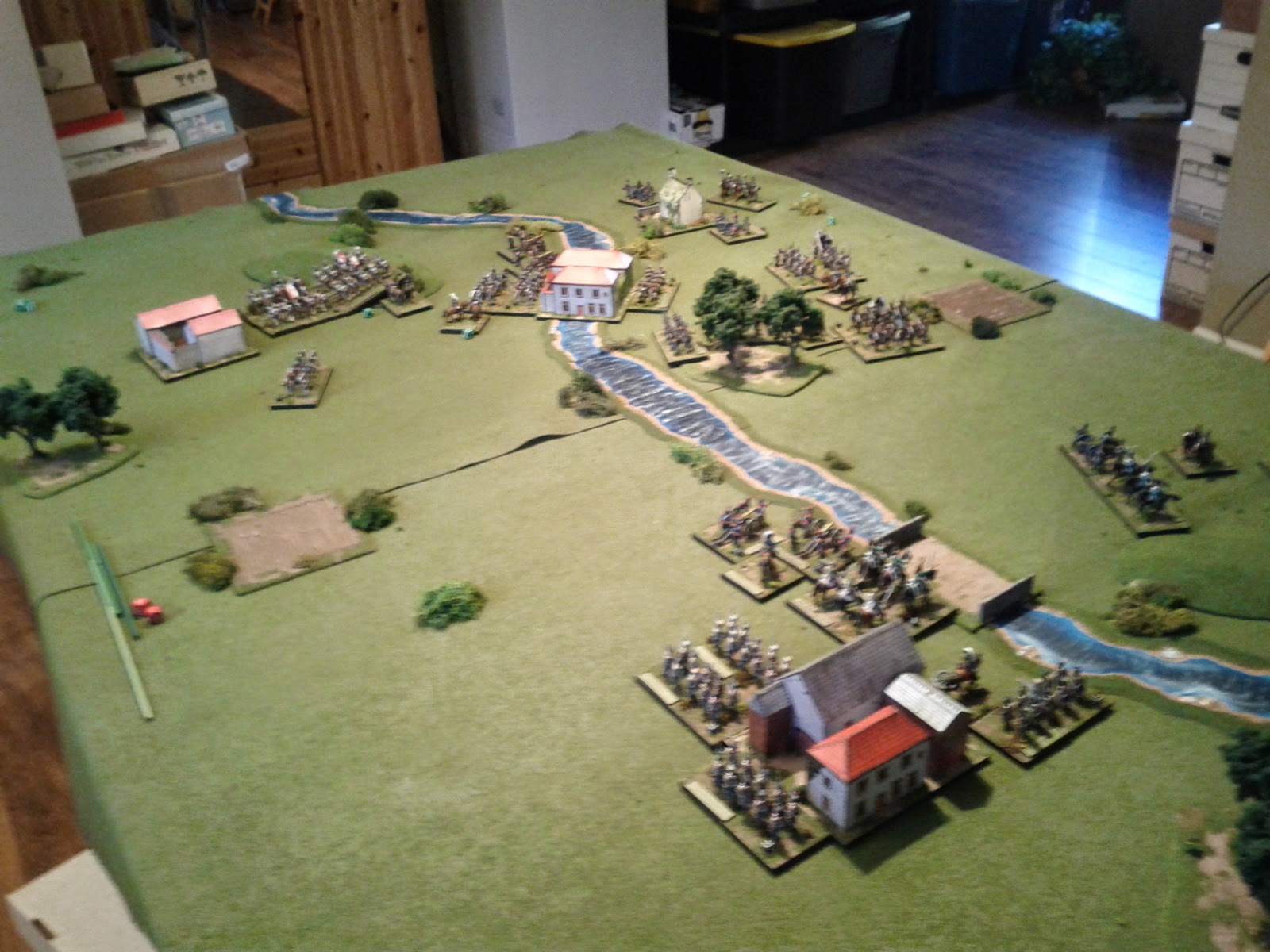 Prussian 3. The new cavalry moves toward the bridge. The town is assaulted again. There are insufficient pips to withdraw the artillery, so the duel continues. Both sides artillery on the Northern (far) end is a bit ragged at this point. 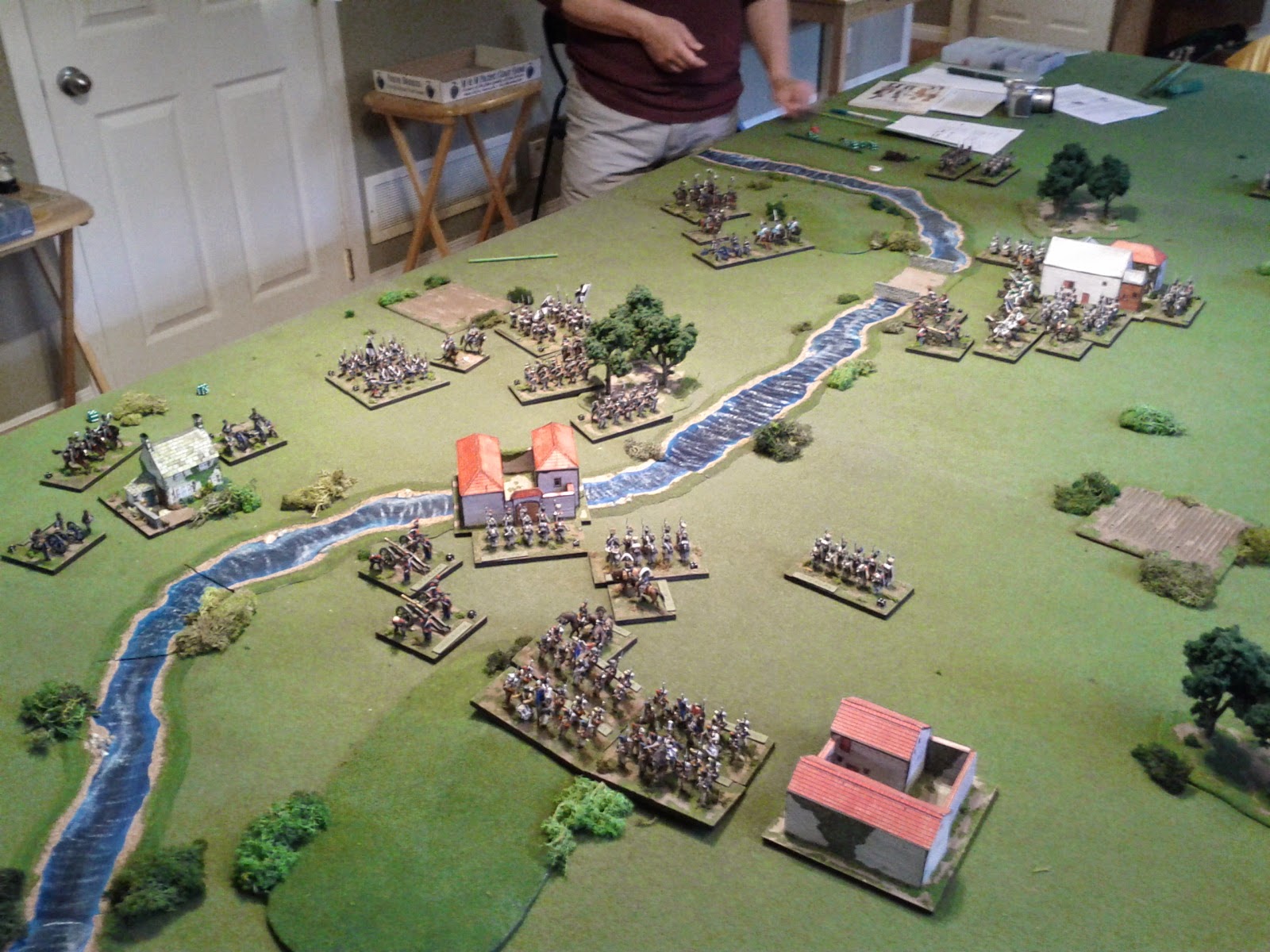 French 4. Approximately 2 hours into battle. The french artillery pull back to preserve themselves (they are at 1 and 2 damage remaining, from 4). The infantry scuttles around the town a bit to get out of range of the enemy cannon. At this point I have some hope of sending more part of the garrison command back towards my lines of communication (LOC) to preserve them. The town combats are going so well. They are forming up near the river.

In the distance the cavalry get back to the starting line to await a river crossing by the coalition. 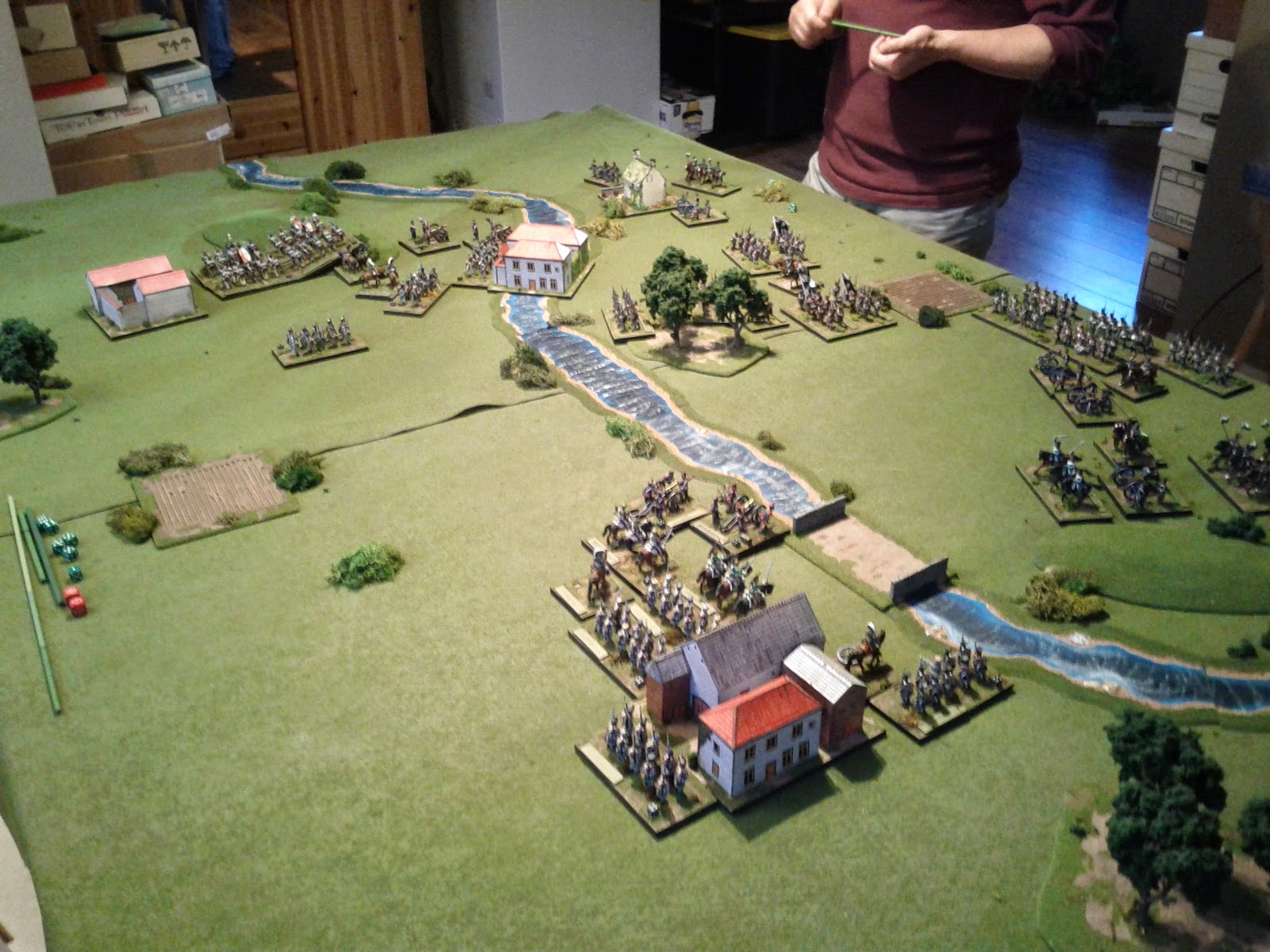 Prussian 4. More bad news for the french. A massive force of prussians arrive to force the bridge. The attack on the Northern town crossing has hit a lull, with many exhausted (1 damage remaining) units, but the Southern bridge crossing, lacking a town defense bonus is looking a bit vulnerable now. 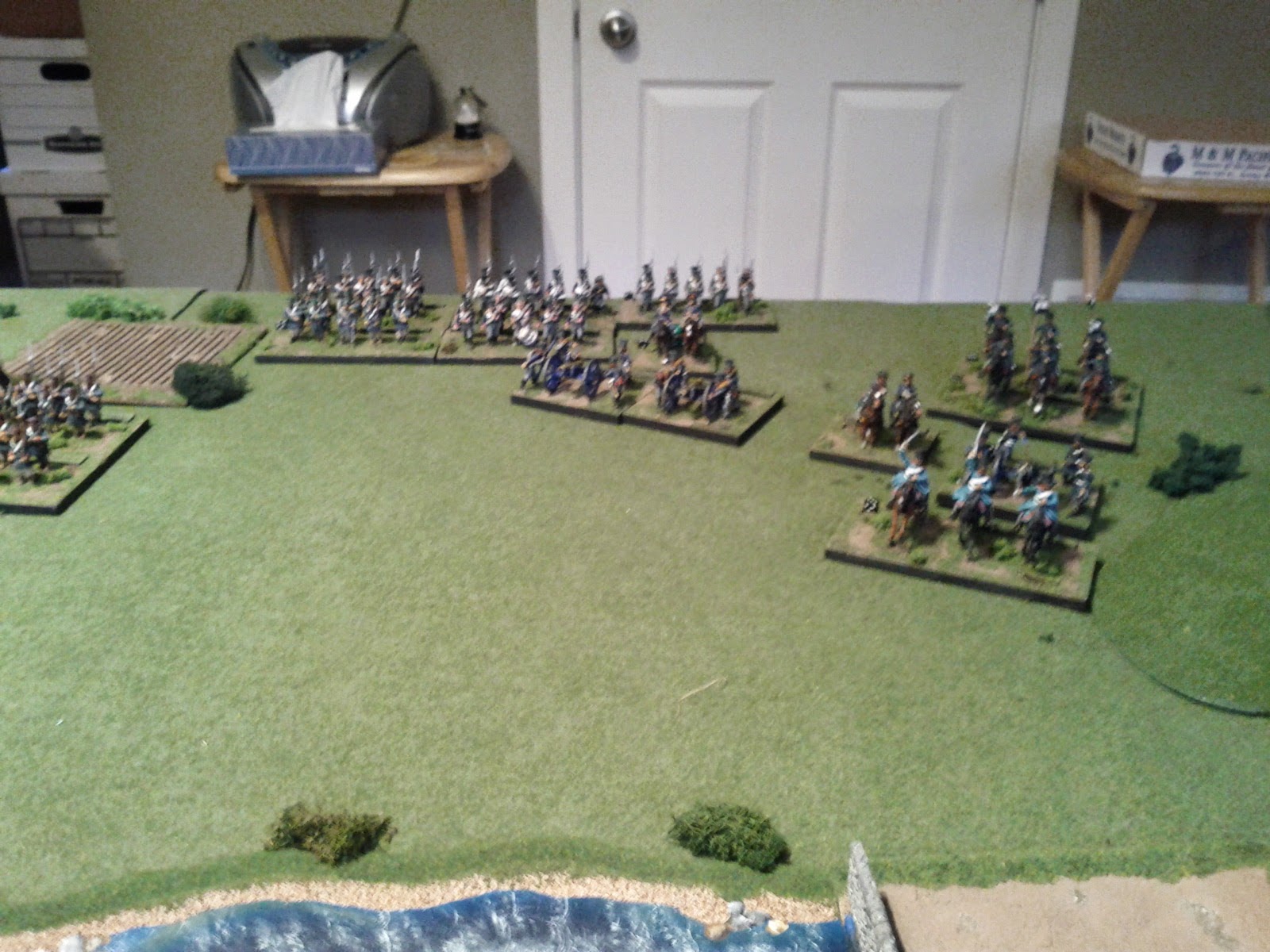 Luckily poor command results in only the artillery moving forward this turn. That is a lot of bases coming my way. 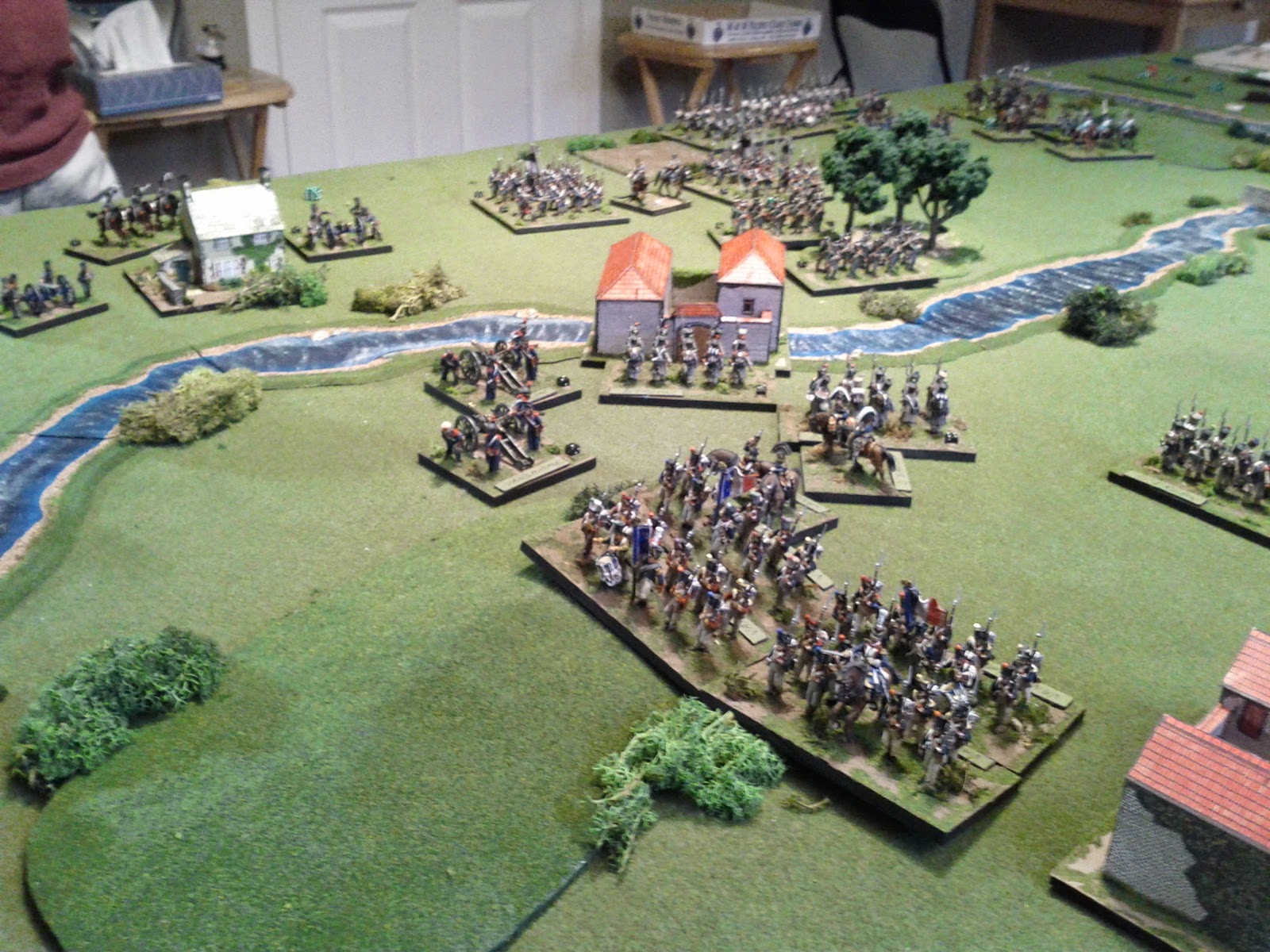 French 5. More relative inactivity on the northern/left flank. It helps that many of my command rolls were awful, but also being the defensive meant not a lot of action was required.

As Doug says, his game is intended to by played by a corp commander who needs to feed in reserves at the correct time. The tactical is de-emphasized. I'm a bit worried about the bridge at this point, but a bit more worried about reinforcements on my left flank. The command holding the left wing, which by all appearances is also my reserve, continues to sit. What will happen next!?! Stay tuned for the exciting conclusion of the Battle of Souffel!
Part 2 here
Posted by daveb at 4:02 AM