The (inconclusive) conclusion of the battle. Part 1 saw the battle develop with a deep salient in the centre by the french. The 2 flanks are isolated from the centre by lakes, and the austrians are attempting a double envelopment, and solidly pushing back the french flanks. The battle is set to go epically sideways for whoever loses first in the centre or (either) flank. 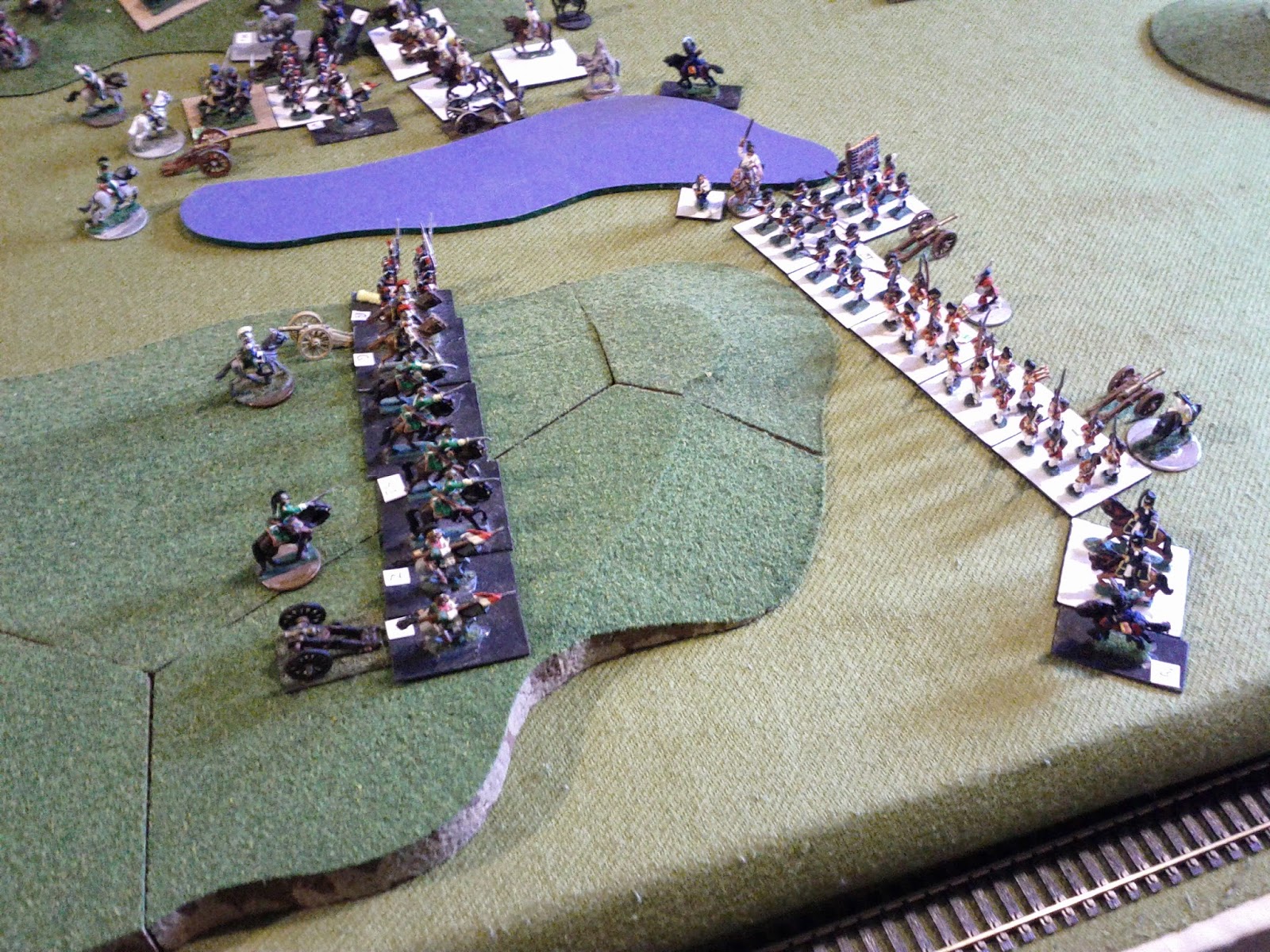 Turn 4 (French) bottom half of the turn.
The french cavalry and flanking divisions move back steadily, giving space rather than getting shot by superior musketry. 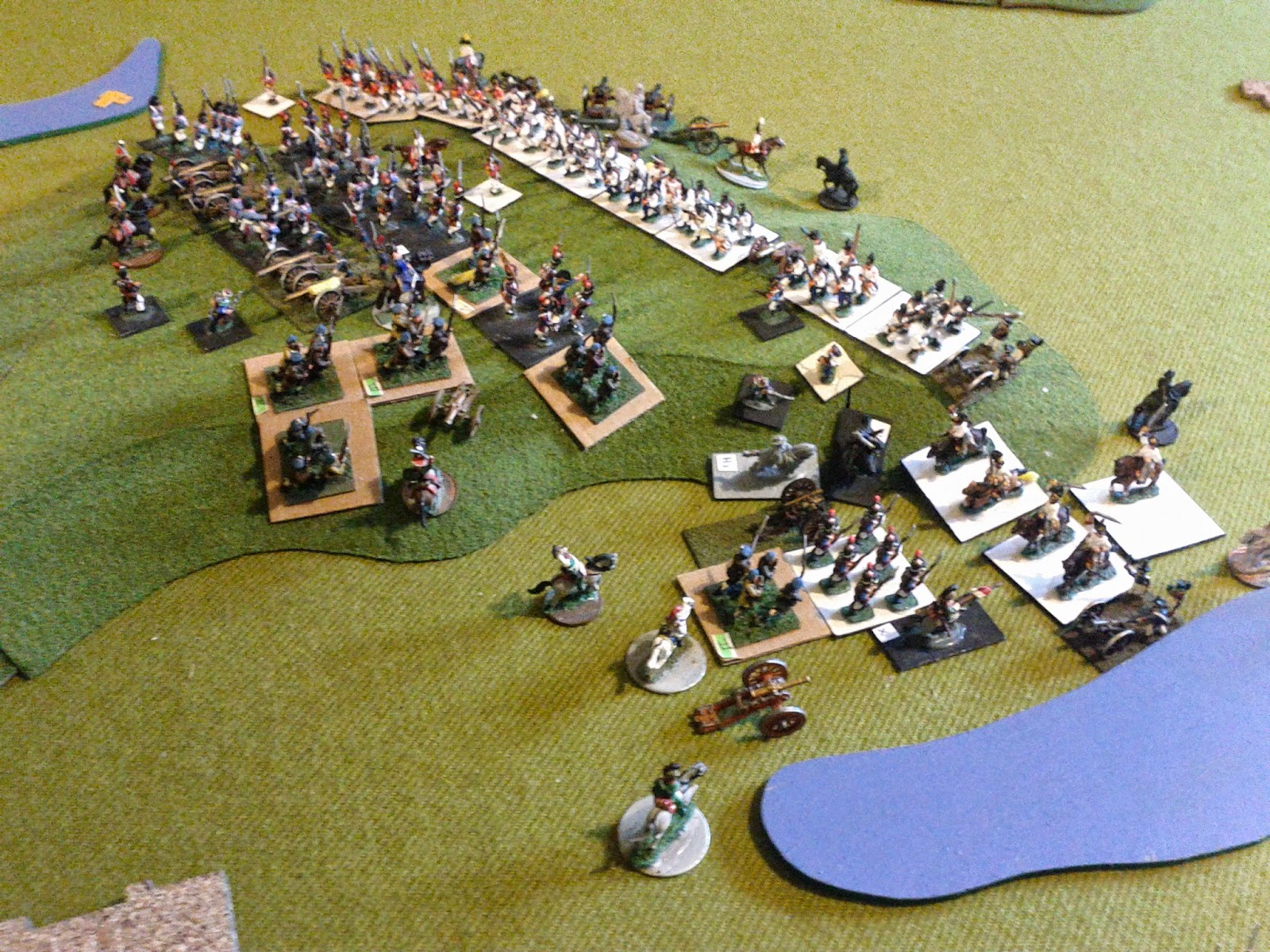 The french centre lurches forward again. While there is minimal gunfire, the cannons have been limbered and advanced, so that the following turn there should be good possibilities for damaging the austrians.

This was one of those turns I found weird, that there was a lot of movement, but no real troop commitment to battle. Perhaps the gamers play inconclusively, rather than the system? 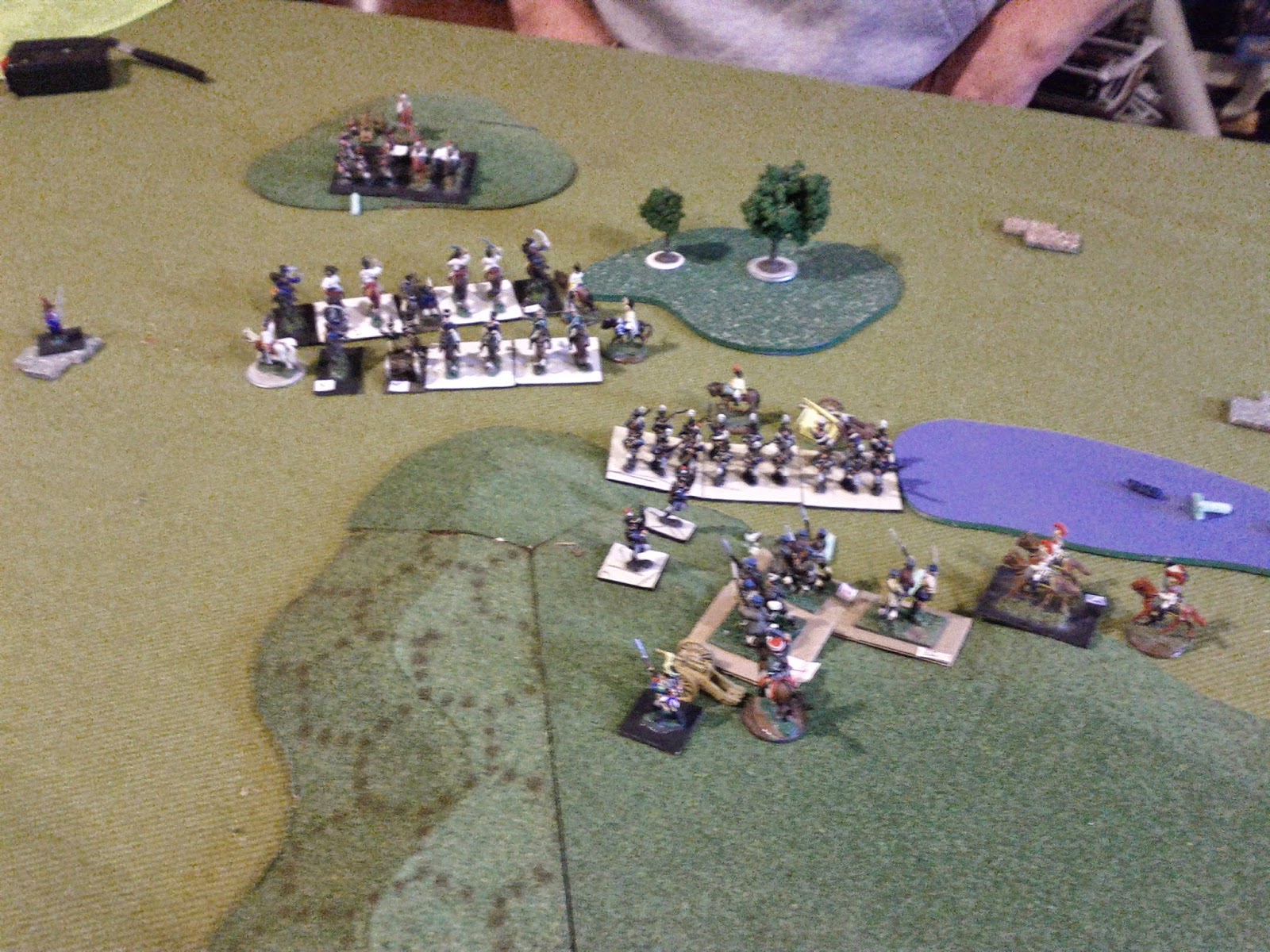 A reserve division on the heights is repositioned, and reinforced with some of the (unattached) army cavalry to face off against this flank threat. 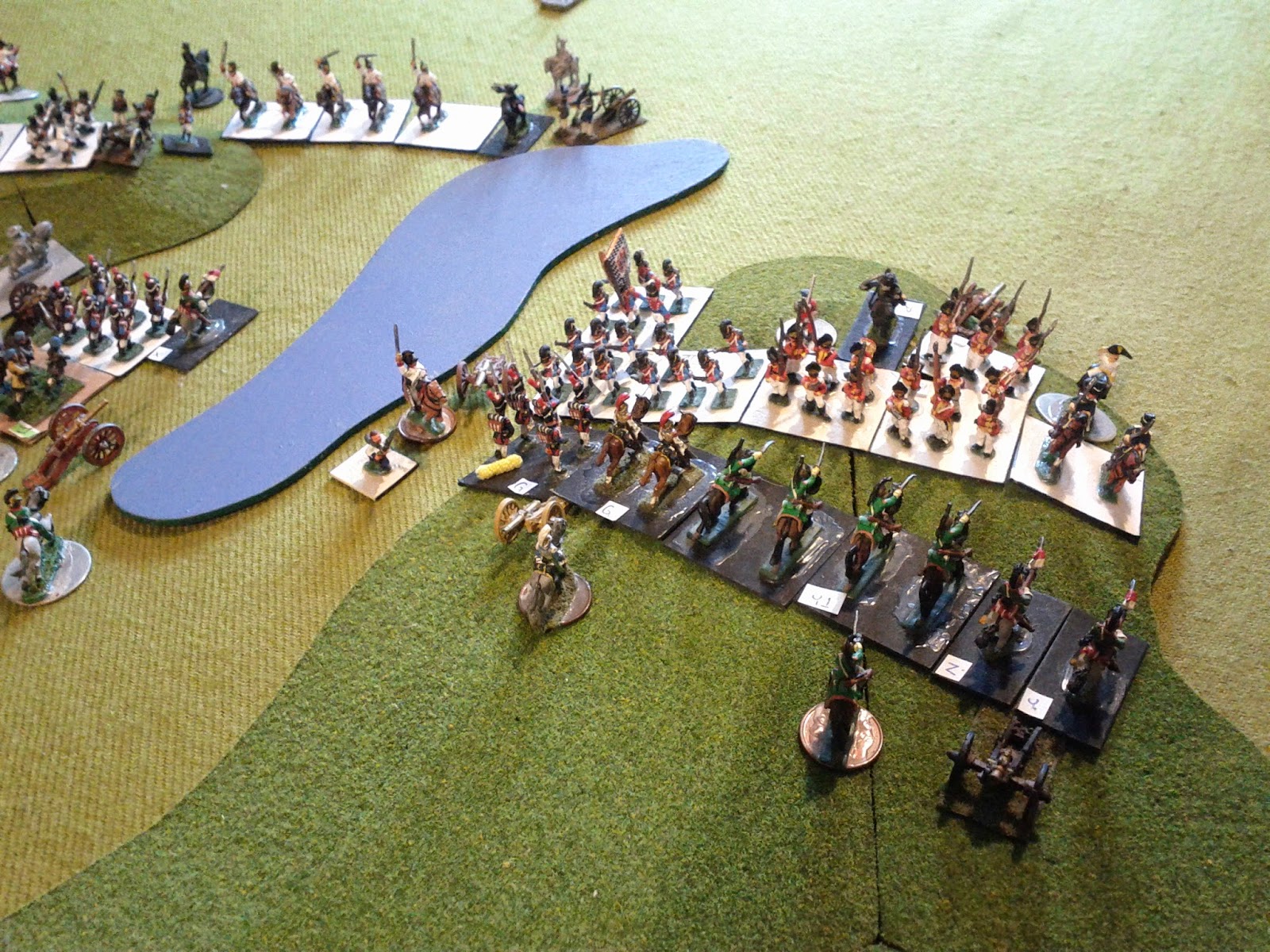 Turn 5. The Austrians advance vigourously on the french right flank. This time they are able to bring some of the french units under fire by cannon and musketry. Some disorder and hits are delivered. The french are running out of space on this flank. 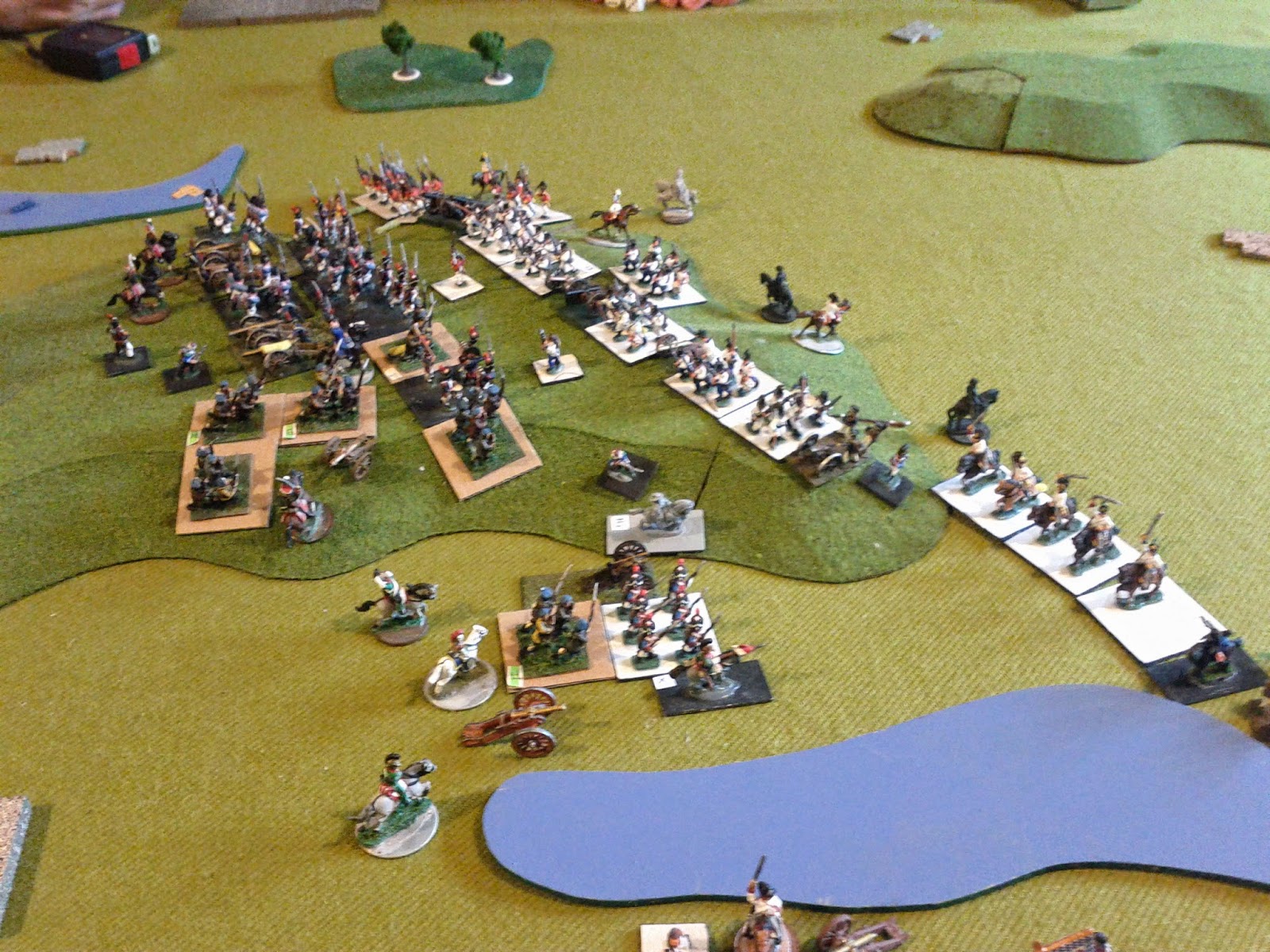 Turn 5 (french) Across the central plateau we see the two armies lining up again.


The french cannon are within range of the austrians to bombard next turn. And numerous infantry has gone stationary (an big increase to musketry and close combat). 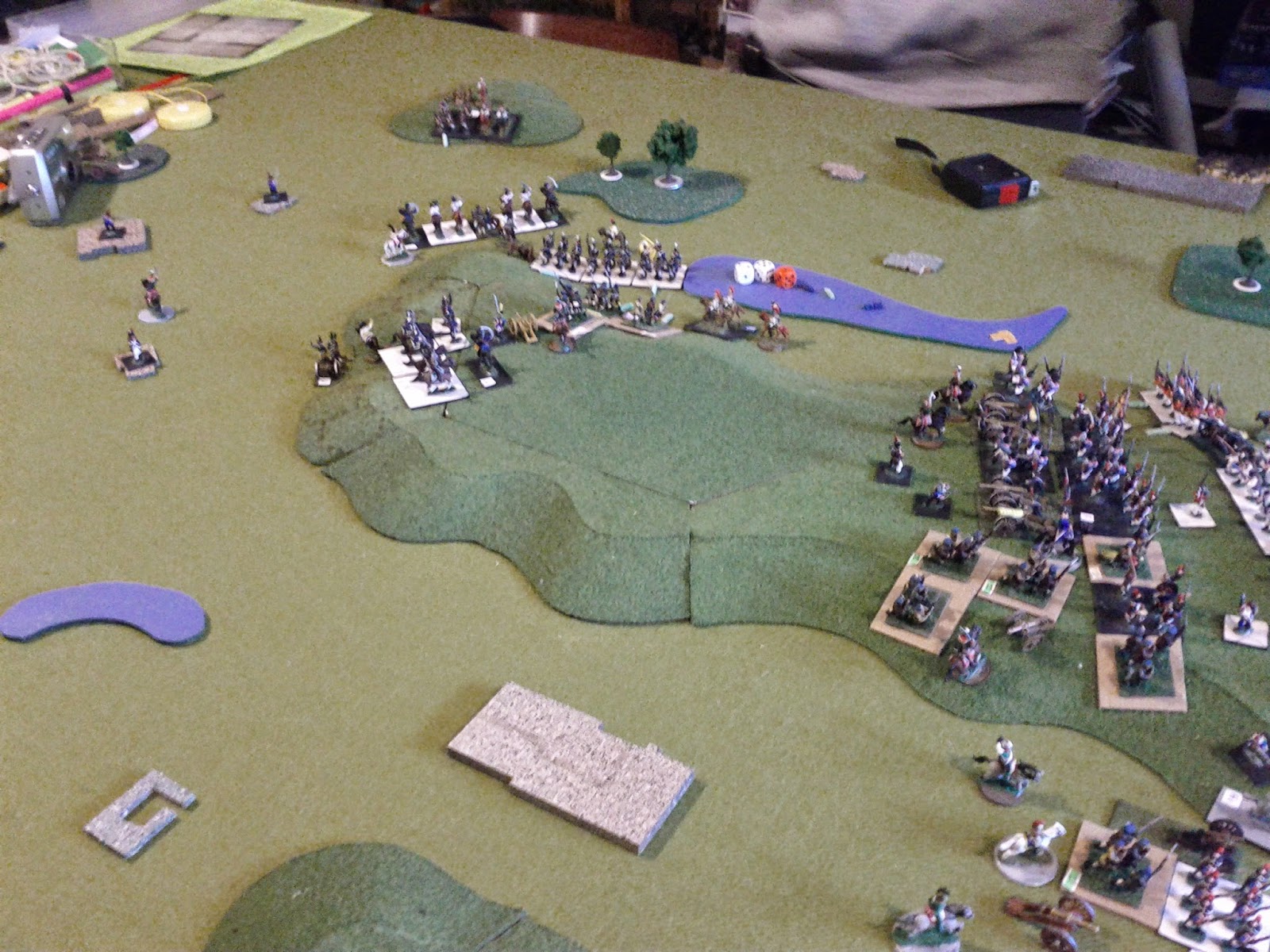 Turn 5 (french)
The French rearrange forces to create a rear guard on the backside of the plateau, as the Austrian cavalry continue an envelopment maneuver. It's almost a shame that there is no baggage marker, or knowledge about lines of communication and retreats, as in real life I suspect this would be seriously concerning to the French. It concerned me, but I was assured by my fellow commander it wasn't a big deal. 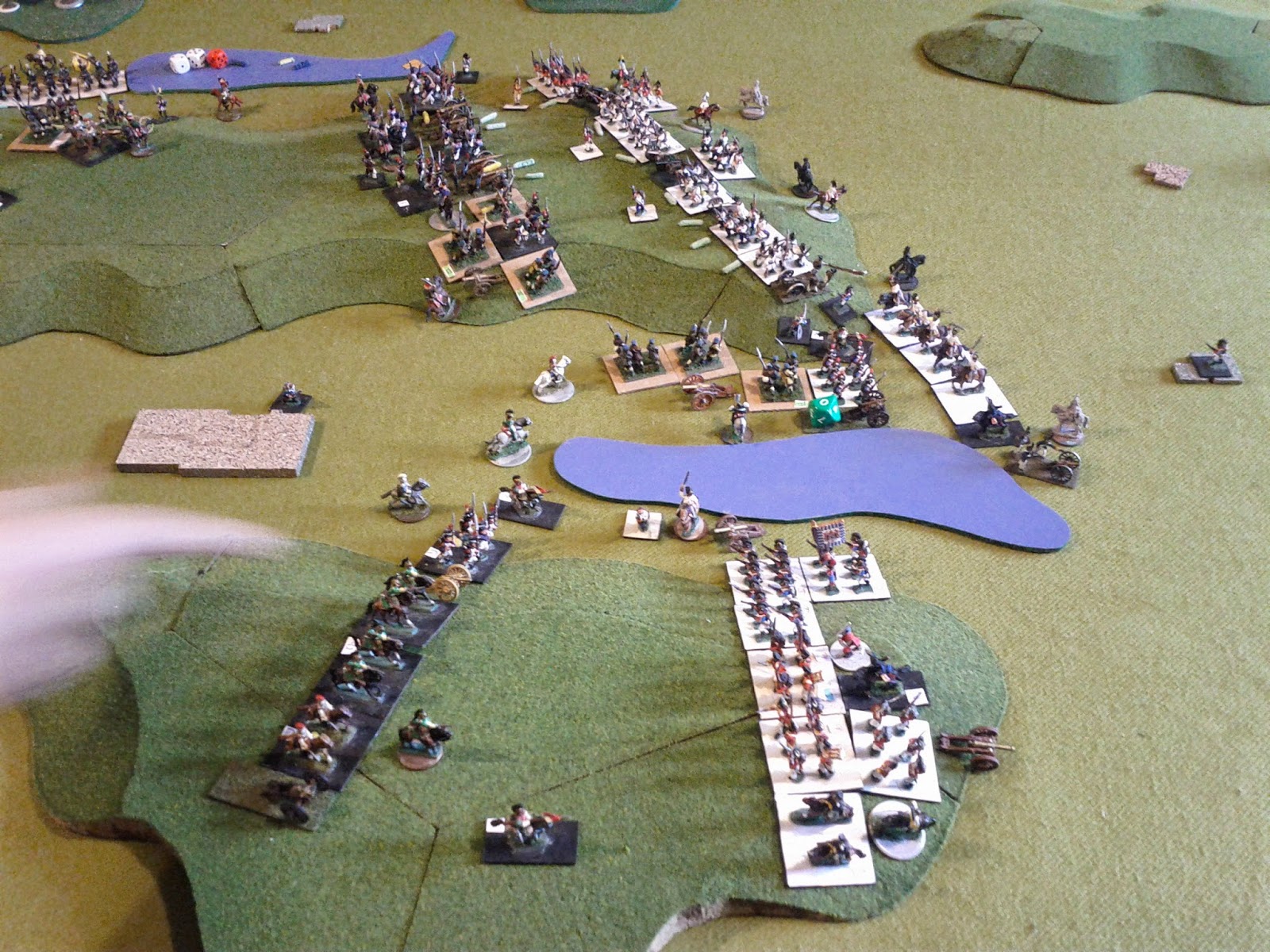 Turn 5(french) Larger view of the most of the table. 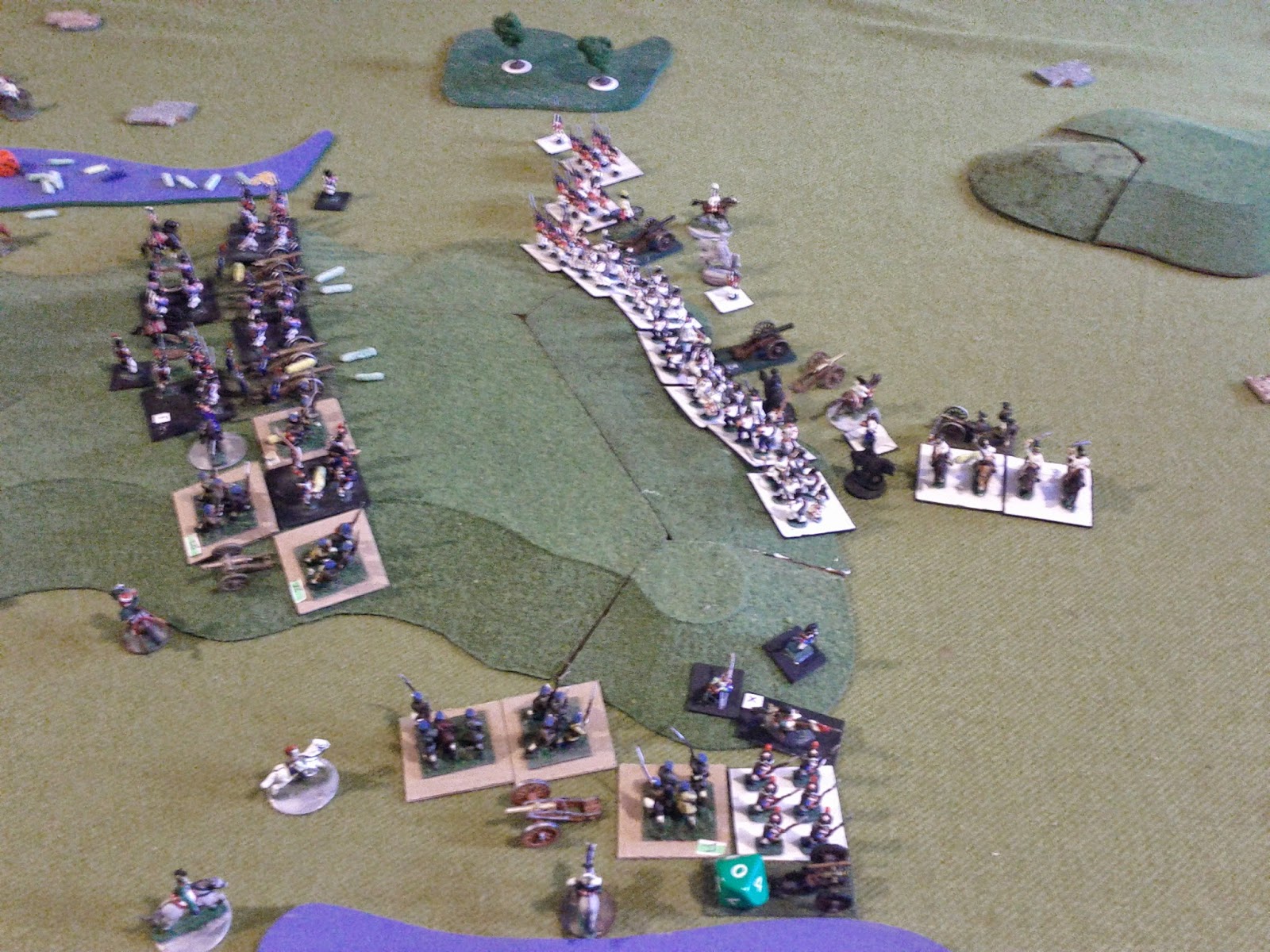 Final Austrian Turn 6. The clever bastards pull back over the crest, denying us a chance to cannonade them again (which worked to great advantage the first time).

In all honesty, this would probably take us at least another turn (or two) to close and hurt them. Meanwhile the developments on the flanks and rear would take precedence to the course of battle. Terrifyingly, the austrian flanking cavalry has wrapped around ENTIRELY (white based cavalry just above the grey town marker). There's a lot of troops that can be moved to address the issue, but the French right flank (bottom) seems to be hanging in the wind.

I believe the talk was to abandon the right flank and charge these cavalry to address the rear threat. Infantry from the centre would hold the town and the stretch between the river and town. 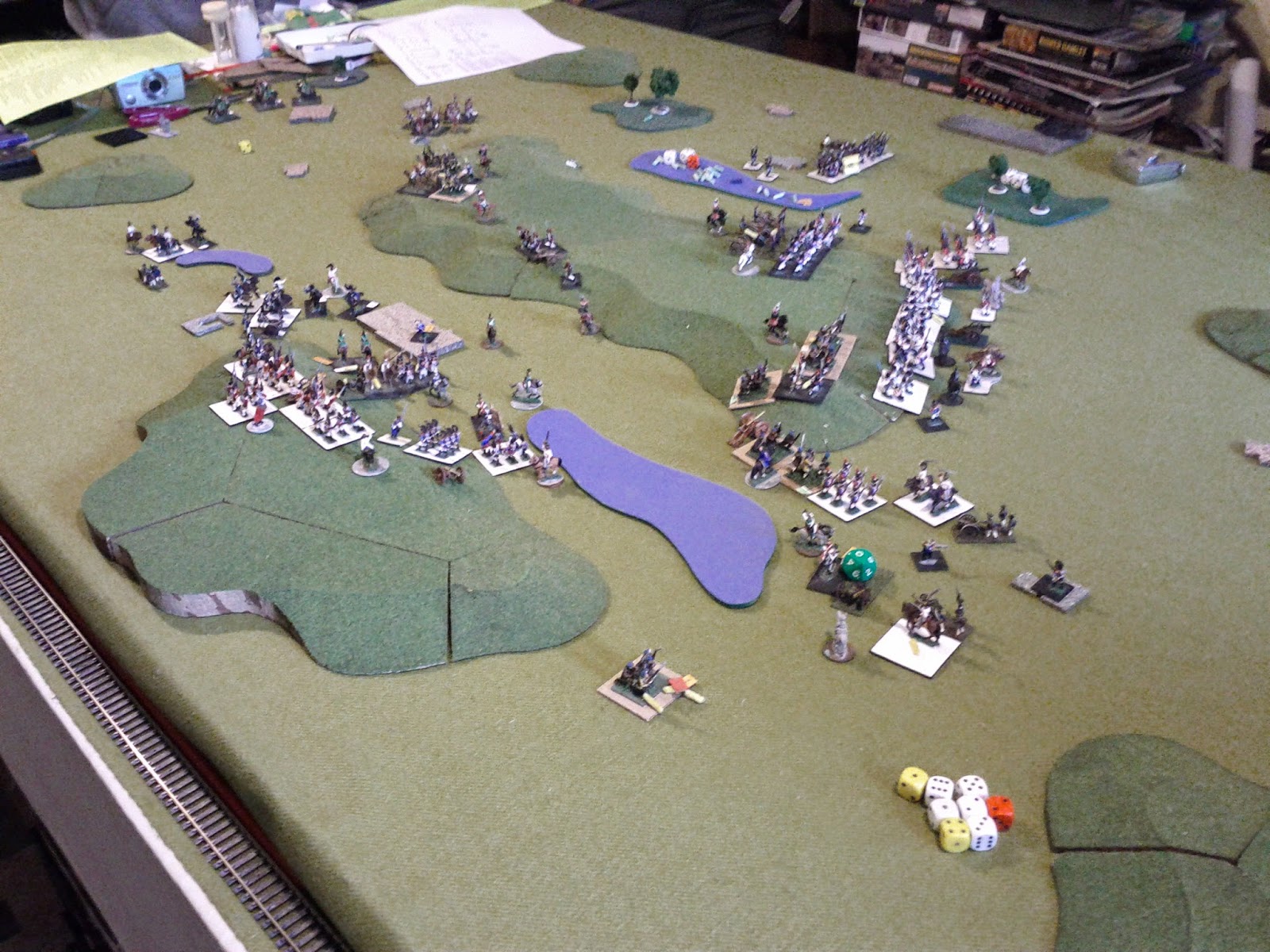 While it's still my second game, both have ended up quite inconclusive. I'm uncertain if this is the time we have to play, the nature of the players (they know each other quite well and expect certain actions from each other), the rules, or, as has been suggested as an issue, the challenges of the table layout each time. There is some rustiness with the rules from some of the players, so that might improve speed as we game more.

There is something to be said for the low model counts required. The rules seem to have a fairly simple basic mechanism. For a pickup game I like the wing by wing setup on a random diagonal, it certainly gives some extra capacity to create flanking moves, and be surprised by the terrain you need to deal with. The fast movement speeds (especially with march moves) gives lots of capacity for impressive flanks and to and fros.

The command and control seems to be fairly basic, with strict limits on how far troops of a formation can be from the commander. There seems to be lots of commanders available generally, although this probably speaks to the army creation decisions more so than anything else.

Having units stay on the table damaged till they are destroyed gives some nice eye candy. I have yet to encounter what happens with heavily damaged formations as they get exhausted (can't advance towards the enemy) and worse.

I'm intrigued by the army lists in the second edition book which give more of a national character to the armies. There are rules for skirmishers being sent out and reattached to units which might be a bit more complex than the current way we play. I still have insufficient grasp of the rules to really understand what would be good or bad to choose. Perhaps a historical refight would be fun to propose. Not too sure what the other gamers in the group would think of the idea though as I've only met them a handful of times. Presumably this could eventually save our host from the voiced hassles of creating both sides of the opposing armies.

I definitely believe that some sort of victory conditions/victory points system would be useful. It would encourage more decisive engagements at certain points on the table, and allow the commanders to make more nuanced decisions about whether to risk their forces beyond simply: will this contribute to eventual victory of myself by depleting the enemy/preserving myself. Having written this I suspect this is part of the reason we are getting indecisive battles.
Posted by daveb at 12:31 PM

Email ThisBlogThis!Share to TwitterShare to FacebookShare to Pinterest
Labels: 2014, Volley and Bayonet