Fields of Glory: Gauls vs Pyrrhic 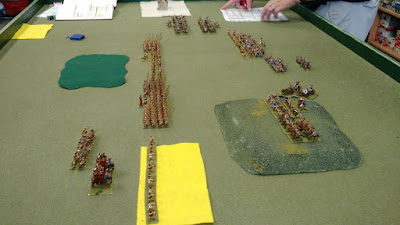 I want to call this one a Pyrrhic victory, but I didn't lose all my troops so I'm stumped how to describe it. Nate brought out his FOG armies for another Sunday throwdown at the local games store (dropzone games). We choose to use the least fielded armies he has, and ended up with an incredibly historical matchup between Gauls and Pyrrhic pike blocks. No gamer blood was drawn by the pikes this game.

Field of glory is definitely one of those rulesets that has enough fiddly bits it can be a bit slow if you are unfamiliar with it. Once we got into the flow, and started to remember what the actual matchups were between each unit (you calculate 'points of advantage' which tell you what you and your opponent hit on) it moved at a pretty decent rate. Certainly a ruleset I'm willing to try again. 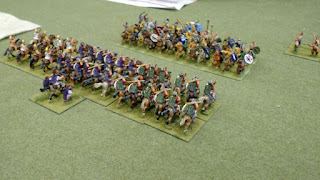 Nate/Gauls ended up with his cavalry split on two flanks. On the left flank I therefore had a slight advantage. These 5 units would end up locked in combat for about 2/3's of the game. 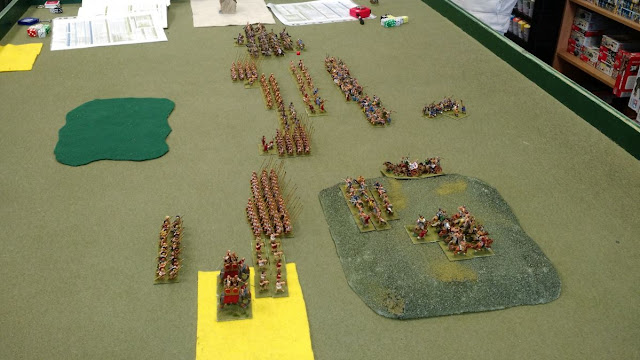 The main weight of the gaul line is in the centre, while the Pyrrhic forces are loosely held there by skirmishes and javelin men. The large green field would have screwed up the pike blocks, which resulted in denudement of strength in the middle. The gauls attempted to march their cavalry unit on the the hill away from the elephants towards the other flank. 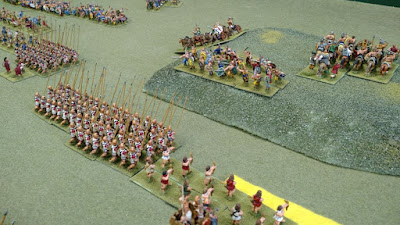 Both the Gauls and most of the Pyrrhic units need to test to avoid charging one another. Cleverly the pike have a shorter charge range, so parked themselves at the bottom of the hill waiting to bait the Gauls down. Unfortunately, when the Gauls finally charged, the pike were at the very bottom, so the Gauls still got a height advantage. 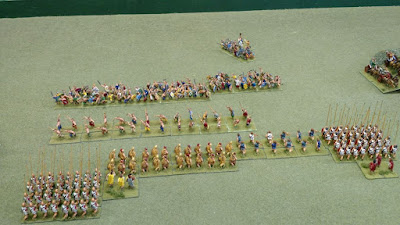 Meanwhile in the centre, the Gaul skirmishers ineffectually throw stuff at the weak centre while their scary troops crawl forward. 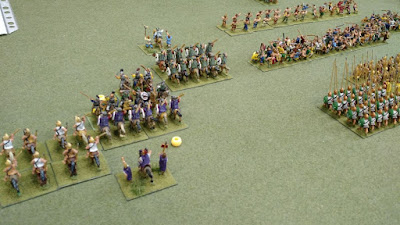 This is probably the point where it went sideways for Nate/Gauls One of the cavalry units was routed and run off. This would allow the Pyrrhic cavalry with the green shields to wheel to the right and start a general roll up of the battle line. 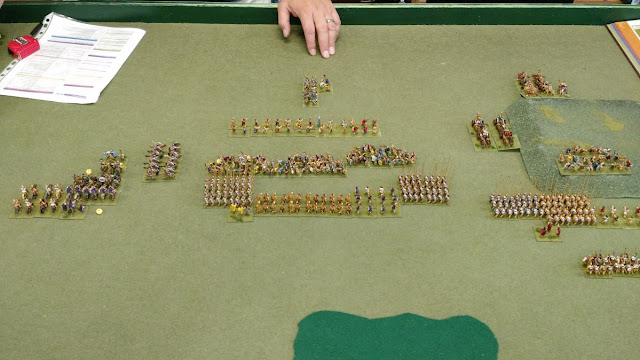 This would all start to take place just as the Gauls smashed through the centre of the Pyrrhic line, and it all started looking dodgy. Pike blocks in FOG are pretty damn solid, but they start falling apart once they lose a single base (they lose 1/2 of their 2 reliable 'points of advantage'). I really lucked out and didn't lose any pike bases, so was able to consistently win or draw combats with them around. The Gauls failed some timely maneuver checks that would have allowed them to crush my blocks in between two units. Thus the slow death of the Gauls was assured. 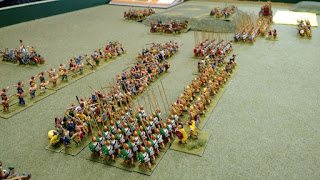 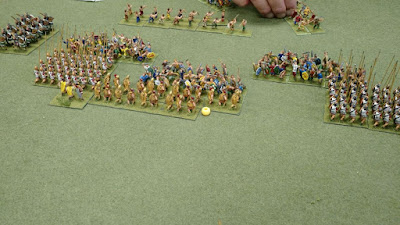 This is the spot where my poor medium foot javelin men get crumped by the Gaul heavy foot. 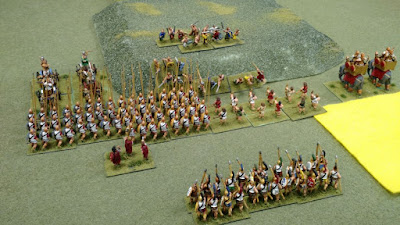 The right flank is holding fast, but soon the elephants wheel in and crush the Gaul flank. The chariots would continue to charge in, fail to beat the poorly trained pike block on the left of the picture, and disengage. Wash hands, repeat. 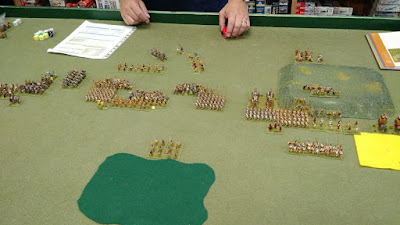 The blowing out of the Pyrrhic centre is starting to be obvious. 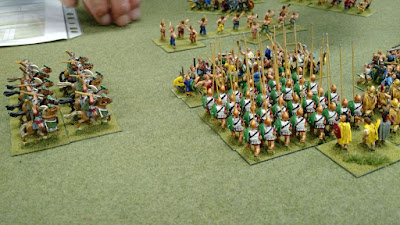 The vise closes on the gaul centre. 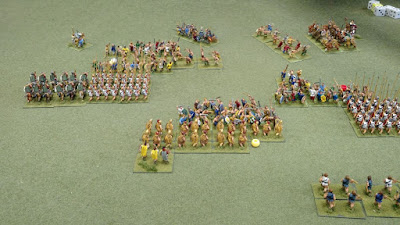 In the back, you can see Nate forming a new line with the cavalry, and some foot units.

On the left of the pic the pike and the green shield cavalry have raced off and failed to catch their prey. The routers have disordered units behind them by their untidy 'advance to the rear'. 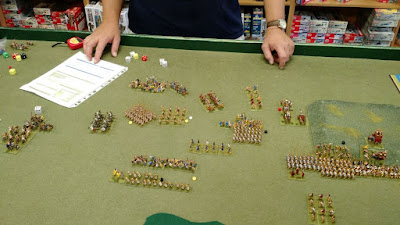 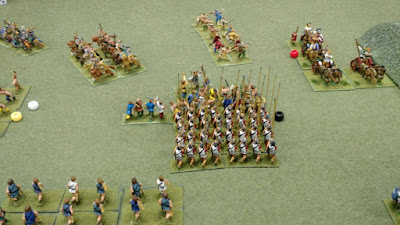 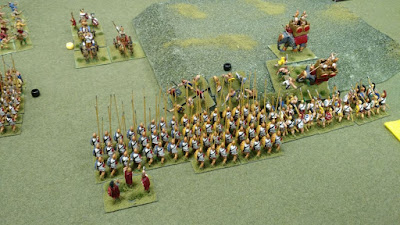 The killing of the right flank. Black markers show routing units, which are beginning to multiply. 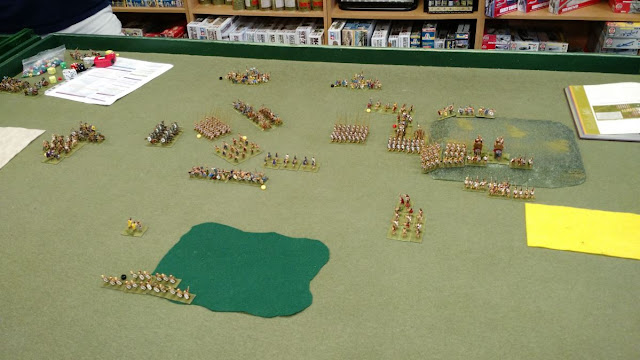 The Pyrrhic javelin in the bottom continue their own run. On the left the Gaul noble cav have routed their opponents and are busy cleaning up the light horse that was helping fight them for most of the battle. The real fight has been fought in the centre though. 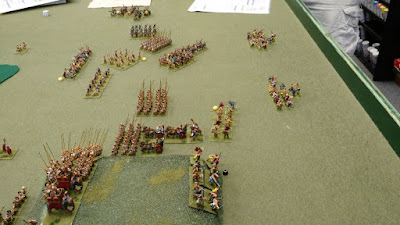 You can see a chain of 4 routing Gaul units all on the right hand side of this picture. 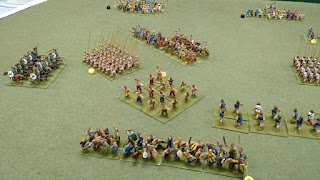 I was just beginning to wonder if the battle would turn into a 'bug hunt' and take forever to resolve when suddenly it was over. The number of units(battle groups) you start with is your target break number. Destroyed and routing units are worth 2, shaken are worth 1. So really, you need to dismember about half of your opponents forces. 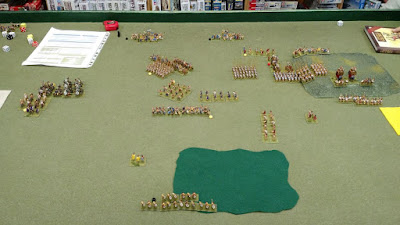 Another fun game with Nate using his great collection of figs.