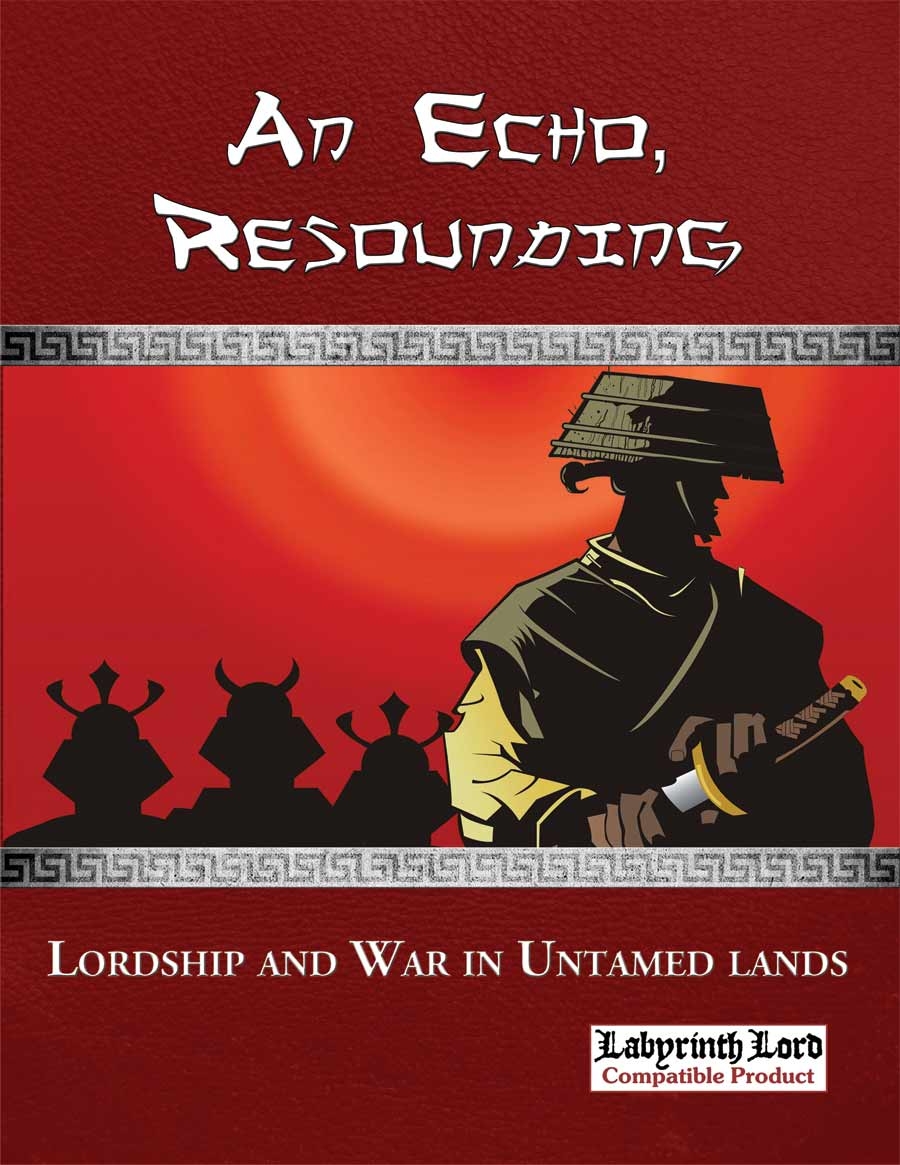 Although technically labelled An Echo, Resounding I figure I can shoe horn this one into E.
Echo, Resounding is a fantasy RPG toolkit for sandbox gaming. It's published by Sine Nomine Publishing, the same person/folks who brought Stars without Number (available for free download!).

Sandbox gaming is my favorite type of gaming. While it does help having a larger setting that players can be somewhat familiar with, the ability to drop in concepts, villains, move towns, and events around without having to consult and work with the 'Canon' of the 'official' setting is fantastic. It's particularly helpful to not have to listen to Mr. Encyclopedia tell you why that doesn't work, or to simply be vague on the official setting and need to consult published material.

Sine Nomine has designed many of their books around the central idea that you will be making up your own sandbox to play in, within a larger setting they define (loosely). Typically the mechanics they offer up are tags and a framework to help get your creative juices flowing to create points of interest within the campaign. More on this later.

Echo Resounding is listed as a labyrinth Lord compatible product, but it would easily port to most fantasy systems (requiring either dropping or modding a few less critical parts). They offer up an example sandbox, the westmark, with a map and 40 locations of interest, each with about a 1/2 page writeup. The  sandbox is placed within the 'Red Tides' setting, another one of their published products (which I've picked up as a result of getting Echo, Resounding) but again, you can read between the lines and largely use this product (even the sandbox) with almost any fantasy system.

Overview
Sine Nomine suggests that pre-planning should largely only be done if you like that sort of thing. By minimizing the work done to create your setting you are unlikely to get frustrated if your players avoid your mapped out areas, and/or you will avoid rail roading them into those areas.

You start by creating a map and then seeding if with population centres, ruins, resources, and lairs. You then name these spots and add tags/traits (with a large number of tables and traits provided). Obstacles for each area are then generated/added, which explain why the particular location hasn't become an empire/isn't harvested fully/hasn't been resettled.

Given that you match 12 options with another 12, you have a basic 144 tags sets that can start to fire your imagination. Some are obvious tropes, forgotten sorceries with sinister cult, but what about the great art with angry dead....how did that come about?

The next step is the Hall of Infamy, which is a great mechanic. The author points out that you shouldn't suddenly hear about the famously evil dragon/liche/whatever when you reach 10th level. Where was he before, why no rumors or legends? Arch villains should be present from the beginning but utterly untouchable by low powered adventurers. So he suggests a hierarchy of evil, with a roster. You place the arch enemy up top and work down. It's easier to down power villains then up power them, so you start the arch villain at the level you think you will let your players reach eventually (level caps are your friends here in my opinion).

In like Flynn has modded this whole process for creating traveller sectors, which was a pretty fascinating read. First post is here.....follow the tags for more reading.

Another feature of the rules are for the players building a domain, taking over that village/town and building it up. Protecting it from raiders, recruiting allies, facing enemies etc. With the sandbox created at the beginning, everything is in place for it to happen.....yet if the players don't care about it you haven't invested extra work. Another feature of sandbox gaming is that players can go where they want.....but the risk is on their head. They need to quickly learn to recognize hazard and learn when to walk (or more likely run) away.

All in all, I found this to be a great product. Printed copy available for 20$, pdf for half that. On drivethruRPG.
Posted by daveb at 11:29 AM