Osric: The story so far (pt 3: A yuletide adventure

We played this game early on christmas day, so there was an obvious theme. 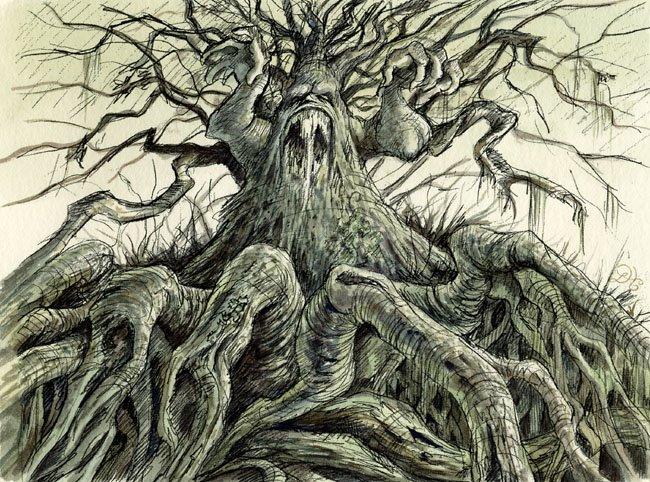 It is winter in compliments and yuletide has arrived. While eating breakfast prepared by Mrs Garrity at the manor the group sees peasants by the edge of town/the forest in a small group that eventually retreats back to town. Jenks the druid is familiar with the practice of making an offering to the Yuletide Ents of a christmas cake (made of the blood of the the last slaughtered animal and other significant ingredients). He goes over to investigate and when returning back to the manor he looks back and notices the cake is gone and a hole has developed where it was. The yuletide ents are known to take their due in blood....one way or another on the yuletide eve.

Assembling the usual suspects the group investigates the hole which promptly develops into a sinkhole sucking in most of the party. Donna and chester manage to avoid the hole and are sent back to town to find rope. Dan, Renault, Scabs, and Jenks proceed to investigate the large chamber. A small hole/burrow is found to the south, as well as a large gate with an archway. The gate is closed with stone doors and the archway decorated with carved elvish figures holding a jade/ruby mistletoe at the arch. It is an odd style with writing we don't understand and obviously very old. I was a bit concerned about trying to blast through (or even walk past) the archway, so Jenks stone shaped a tunnel to the side of the archway into the next area.

Jenks has a brainstorm and casts detect plant on a rare plant ingredient present in the yule cake. He can now detect the cake moving to the south but angling a bit eastward. The group moves into a dark massive hall. It is terribly cold in this hall, although glittering decorations, faceted gems and bunting adorn everything and large tables are set up with frozen food. All amongst the darkened hall are elves that are dressed in their finery and as the group advances they can tell the elves eyes are following them.

Through this disquieting setting the group moves to the East on the trail of the  cake. In the centre of the chamber there is a massive bronze cube with one wall opened (flat on the ground). All along the cube there are strange arcane etchings and a massive buildup of ice inside. A monstrous belly, and a query in some strange language echoes through the chamber. We pick up the pace. We find another archway at the far eastern wall with a totally iced up with bronze doors. Jenks casts heat metal on the doorway and the ice starts breaking away.

The monstrous sound gets closer and jenks summons up a heavy mist (obscurement) as Dan and Renault batter at the door. We suddenly turn and find the source of the bellows, a horribly rotted and frozen beholder floats into sight. With but a single eyestalk still intact and a grey milky blind central eye we are still lucky not to be destroyed immediately. The icey temperatures have obviously halted the decomposition of the beast. In the mad fight that follows Dan and Renault are quickly frozen solid, while Scabs manages to strike deep with some arrows. Jenks cleverly casts heat metal on one of the arrowheads buried inside the monsterous which begins to thaw it and allow the course of centuries to take their toll. At the height of the battle scabs lops off an eyestalk with a perfect shot, but the beast smashes into Jenks for grievous damage. As he is fleeing the charging beholder with but a few hp he sings out 'dashing through the snow' in an attempt to lure it towards the magic bronze box. Luckily a clever and risky ploy at the box is not necessary as the heat and battle damage finally cause the monster to turn to putrifying goop.

The frozen, including Dan and Renault stay immobile. Reassuring their friends they will return (and scabs sets some candles on them for company) they move down the hallway revealed. A music room is found near the far end, and within it a mole family is tracked down with the yuletide cake. Scabs attempts to bargain away moonshine as a trade but the moles will have nothing of it and proceed to gobble down the cake. Jenks casts charm animal and they rescue half the cake, the moles are bundled up in a bag and given moonshine (2 mated moles and a number of babies).

Further exploration finds a hallway with a double doorway carved with demons on it (didn't care to touch it) and a round contemplation room with a starry ceiling (on a black onyx dome) and many murals. Inside a pile of robes a warm piece of coal is found which is found to be magic by Jenks (whose spell list is basically exhausted at this point). Scabs and Jenks return the the grand hall and explore. They find a dog sized frozen spider on a clutch of eggs (it's a christmas spider thinks myself) and a cold furnace. We consider whether to burn the piece of coal in the furnace or not and eventually try touch dan and renault with it. Poof! They can move again. Eventually we decide not to mess with the elves until we are not so hurt and we head back to the initial room and, after a bit of a cave in of snow, escape to the surface.

Many hours have passed and the treeline itself has advanced halfway to the village. It is growing dark. We quickly leave the yuletide cake and the mole family at the edge of the woods and head to the village in to shower the villagers with all our copper wealth.

The hole is revealed as filled in the next morning once the treeline has retreated. GM revelations include the fact that the 'elves' were drow and the yule ents keep access to them bottled up for centuries. 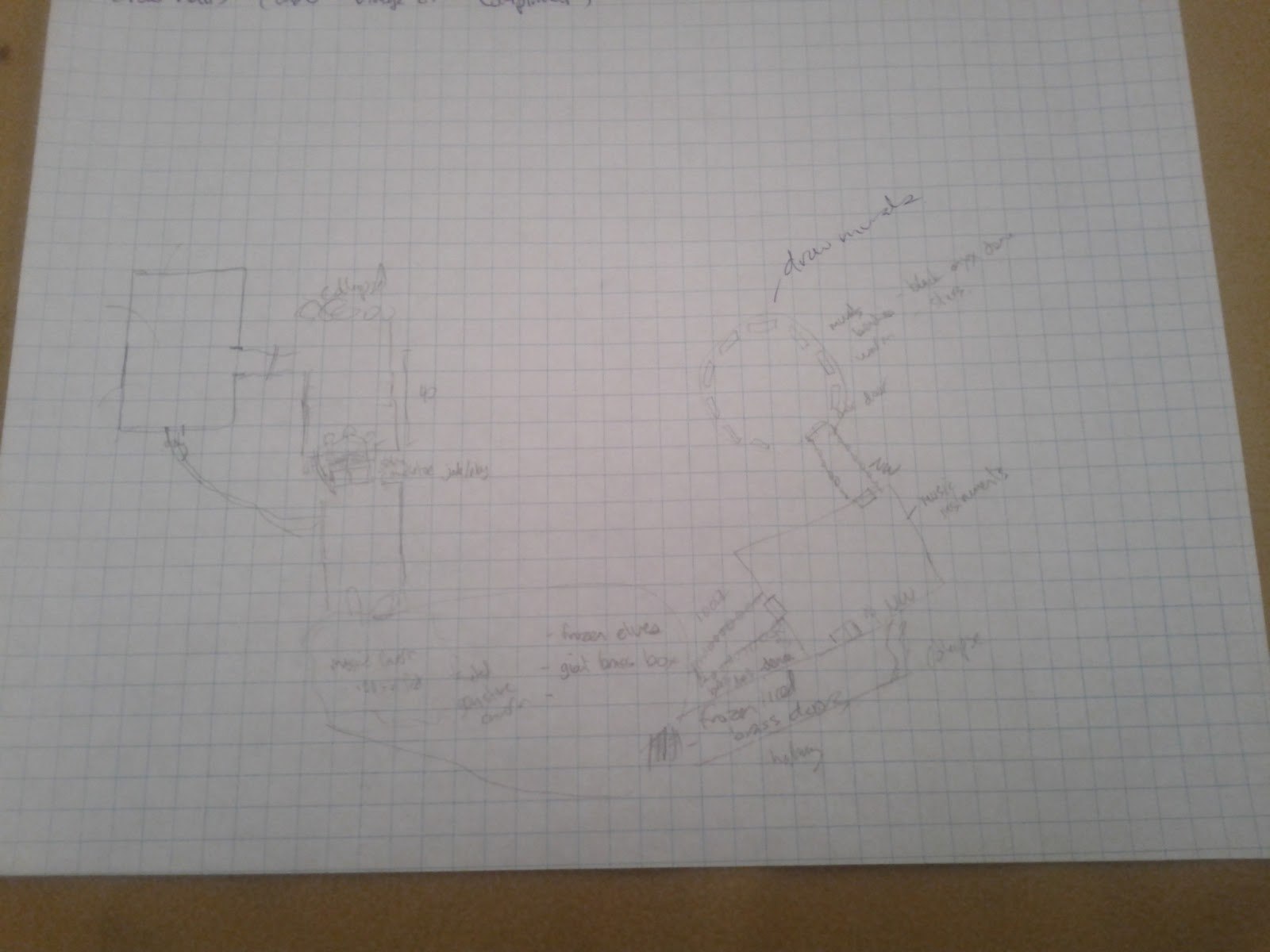 Sorry for the poor quality, I won't be using pencil again to map. Also the large celebration room was ambiguously described (lower left ish) and we were not in a position to carefully map it (get the hell out of here is what was generally the driving thought).