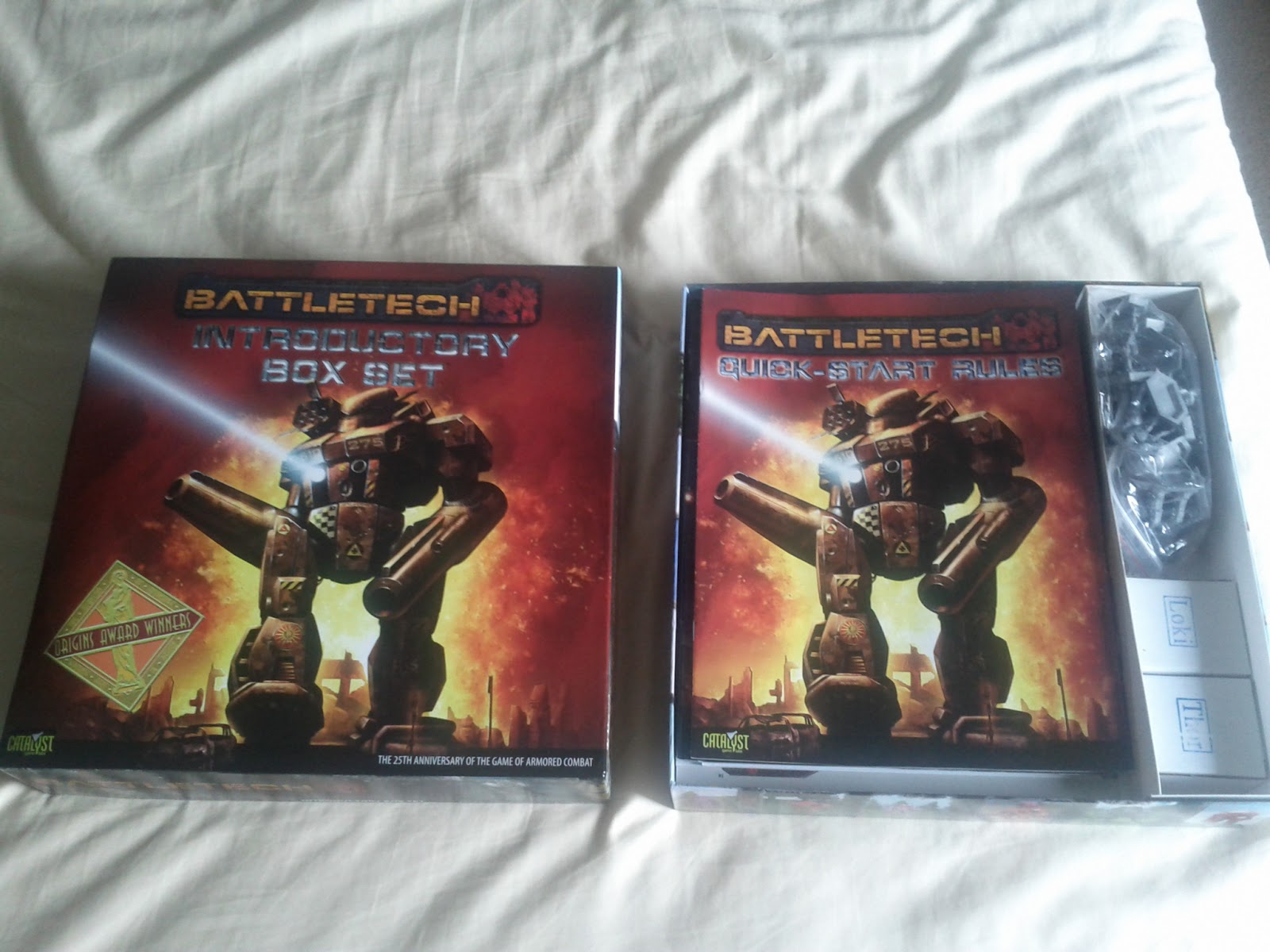 Having played some Battletech last year, and then again at the local gaming club night a month ago, I was inspired to try and get into Battletech again.  Previously when I looked into the game I've been a bit daunted by the sheer volume of information. There are numerous eras, a legion of different mechs, and more names of important factions than you can shake a stick at. Given that my knowledge of Battletech is largely due to a cartoon from the 90's and a TSR video game I didn't have a manual for it seemed pretty insurmountable.

I've since found out from my friend Bryan, who played 'back in the day' that the eras are all a result of the steady march of time in the universe and real of new products. Unlike grimdark 40k, with it's extremely vague dating/chronology advance (none to really speak of), there has been a steady advance in the Battletech universe. Given that's it's been played for almost 30 years (!!) it's understandable that there would be a richness of the game.........which is a bit challenging for the neophyte.

Riding to the rescue is the Battletech Introductory box. The box comes stuffed with goodness and weighs in about 2.5 pounds and is ~12x10x3 inches.

BOOKS
The books are all full colour and most have a heavier card cover. There is:
Rulebook - clearly explained, appropriate use of diagrams
Inner Sphere at a glance - Gives the complete history of the Battletech universe. Actually very useful for framing everything in your mind. Also gives writeup on the major houses/factions of the inner sphere. Gives some info on each of the included mechs as well (though not as useful as the painting and tactics guide). 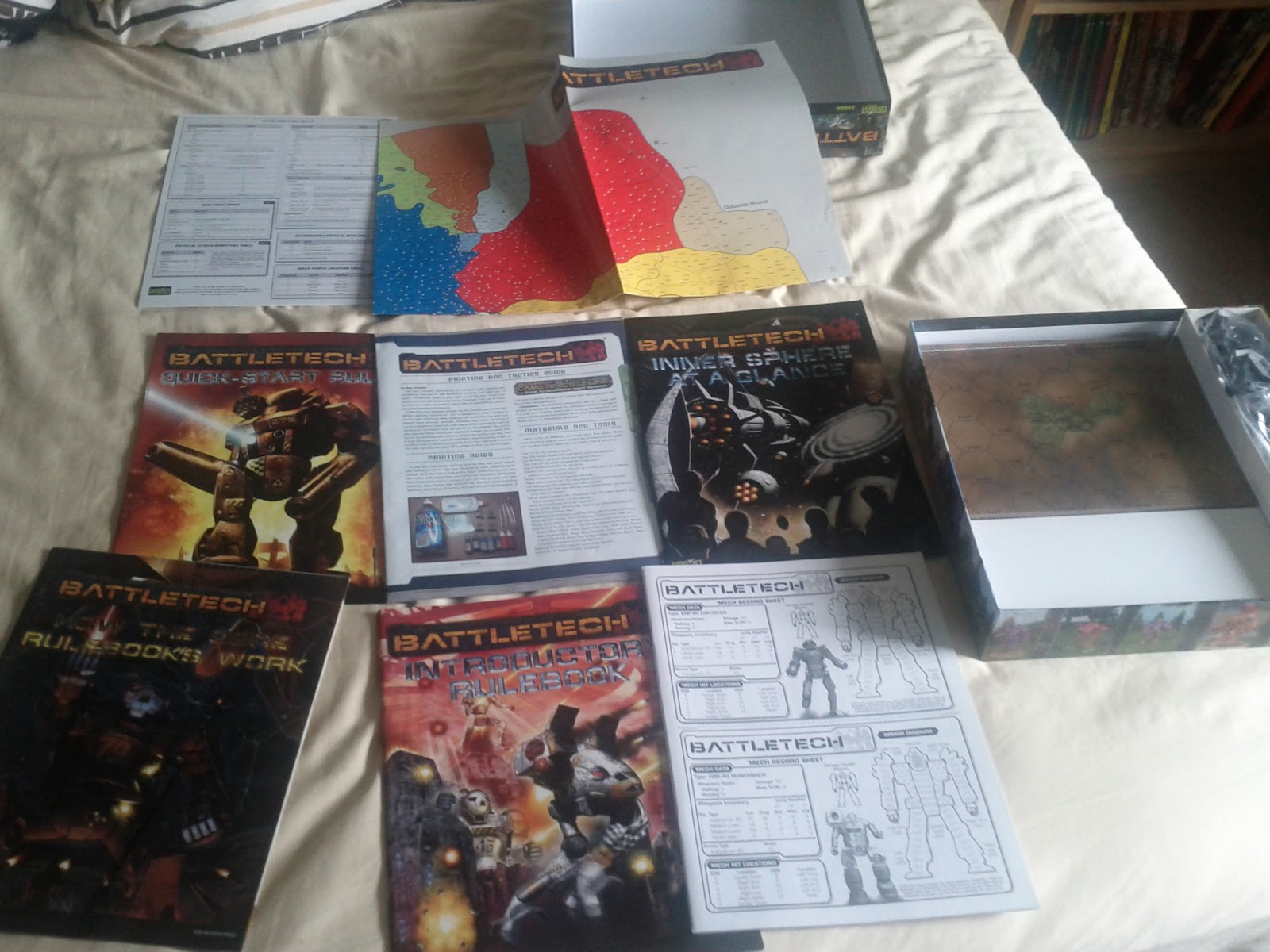 Also included are some less robust (though still largely colour) documents:
-Big map - ho hum, not really my thing
-Mech record sheets - important, although the wonders of the internet would make printing a bit easier than photocopying in my mind. Omitting this would be cause for complaint though.
-Quickstart rules - for those impatient to begin.
-How the core rulebooks work - This little gem actually sheds a lot of light on the various scales and rules books
-Painting and Tactics Guide - This is another gem in the box. While giving some standard painting advice, it also has sections on the houses: what their common colour schemes are, and (better yet), strategies for working with these colours while painting. The tactics are very well discussed for the beginning player as well, and (in my mind) aren't super obvious and/or ambiguous/difficult to use in practice pieces of information. The final section gives a writeup on each of the mechs included and roles of mechs (Scout, striker, skirmisher, brawlers, snipers, juggernauts). It's actually very well done, and gives more insight into what is important in mech design for different objectives. Probably the second most important read of the box.

MAPS
The maps are quite nice, being the original Battletech maps but printed on a heavy card. The were a bit stiff and didn't lay flat when first removed from the box, but a night under a heavy book remedied that quite easily.

MINIS
24 'cheap plastic' miniatures are actually pretty nice. The are obviously recognizable as what they should be, have decent detailing, and have minimal casting faults. My one negative surprise was just how tough this plastic is when I started to clean off the flash. It took far longer than your typical plastic model to clean. I'll be posting more as I get them (ever so slowly) painted up. 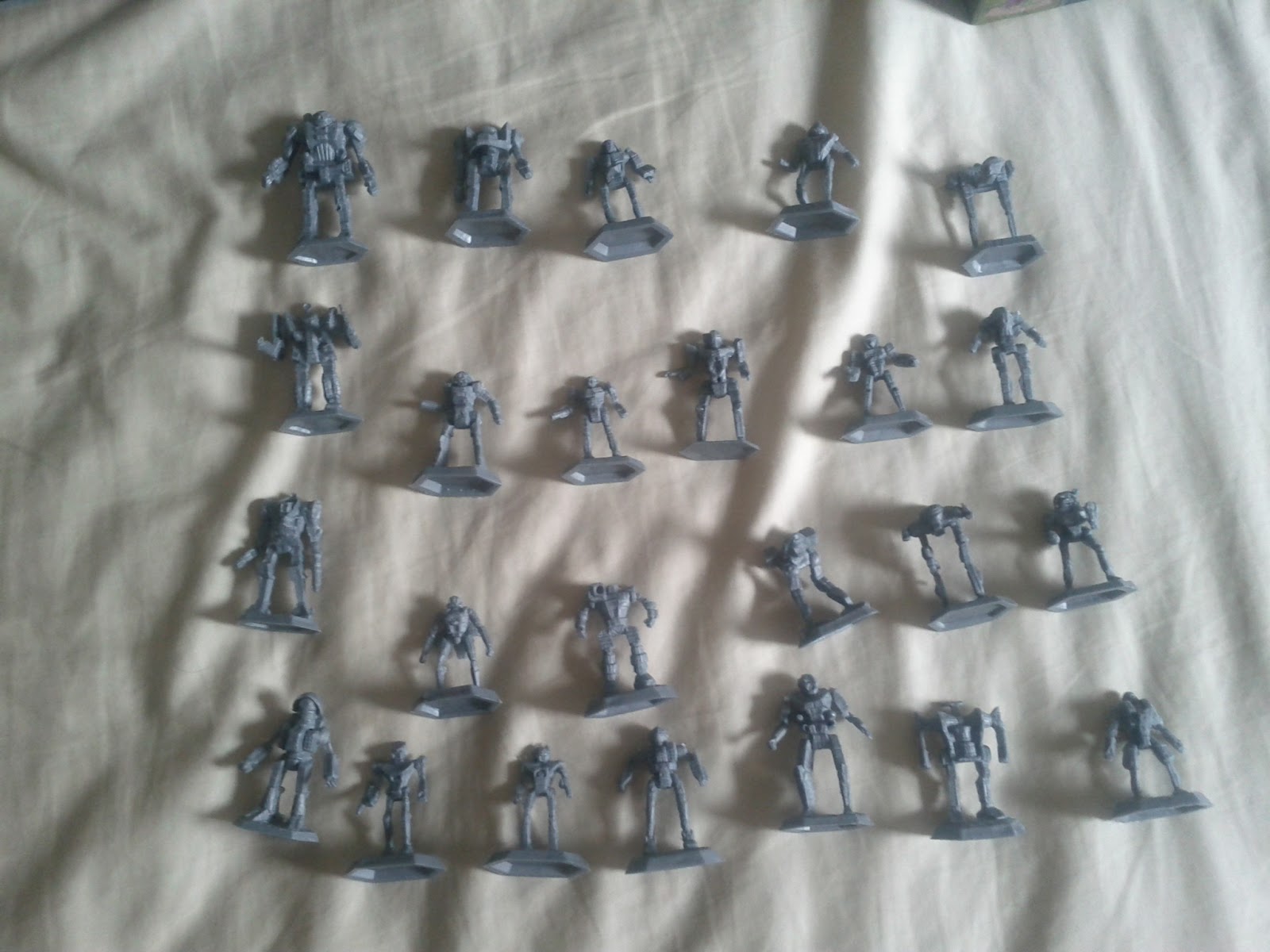 The minis cover a good range of inner sphere mechs from light to heavy. One of the things I like best is that with the introductory set, and the Sword and Dragon campaign book, you have a substantial number of the needed mechs covered. I think if you wanted to cover ever single mech in the campaign book you'd need another 12. Certainly there is a lot of scope for swapping out mechs and proxying to cover your needs. 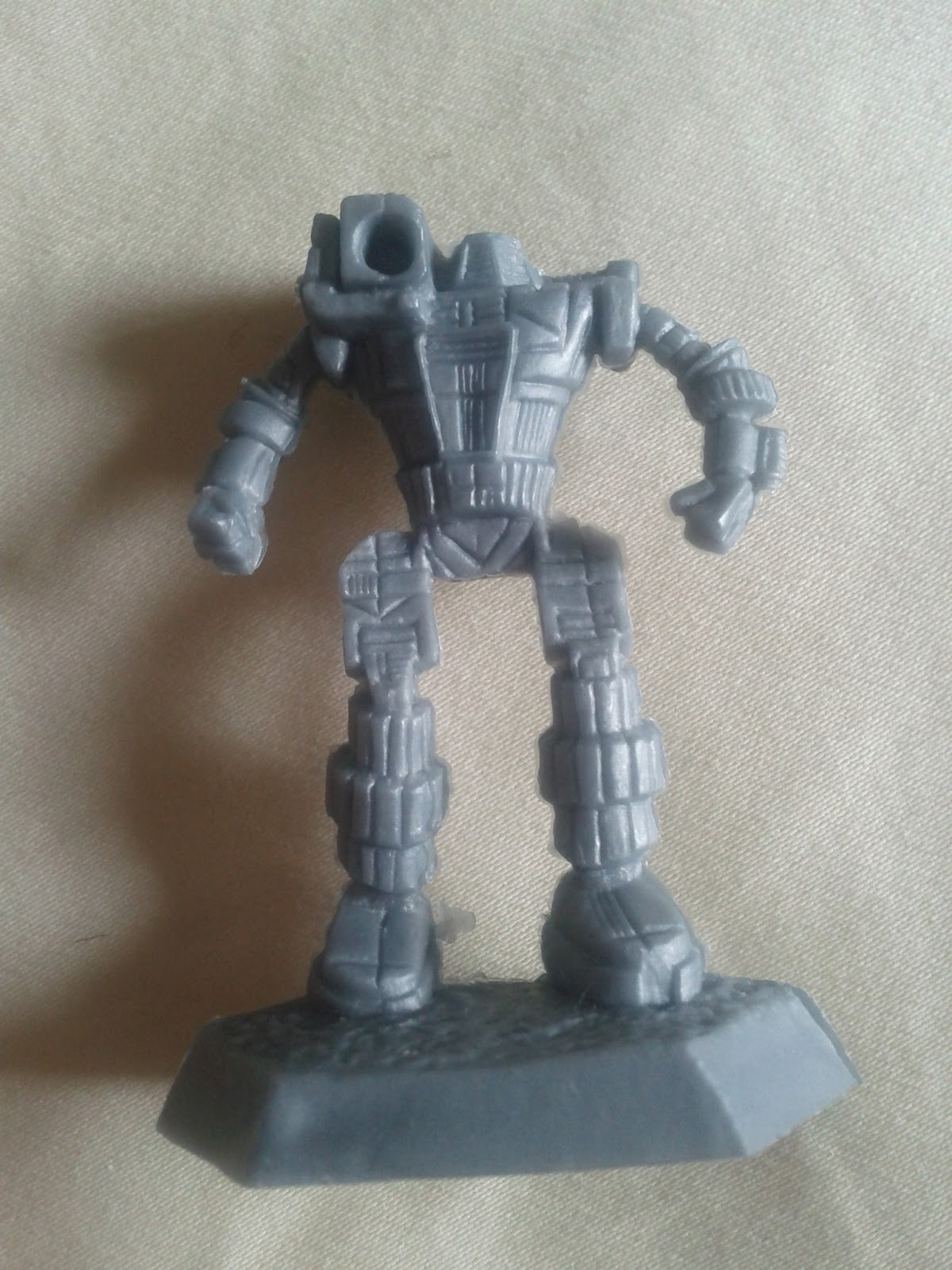 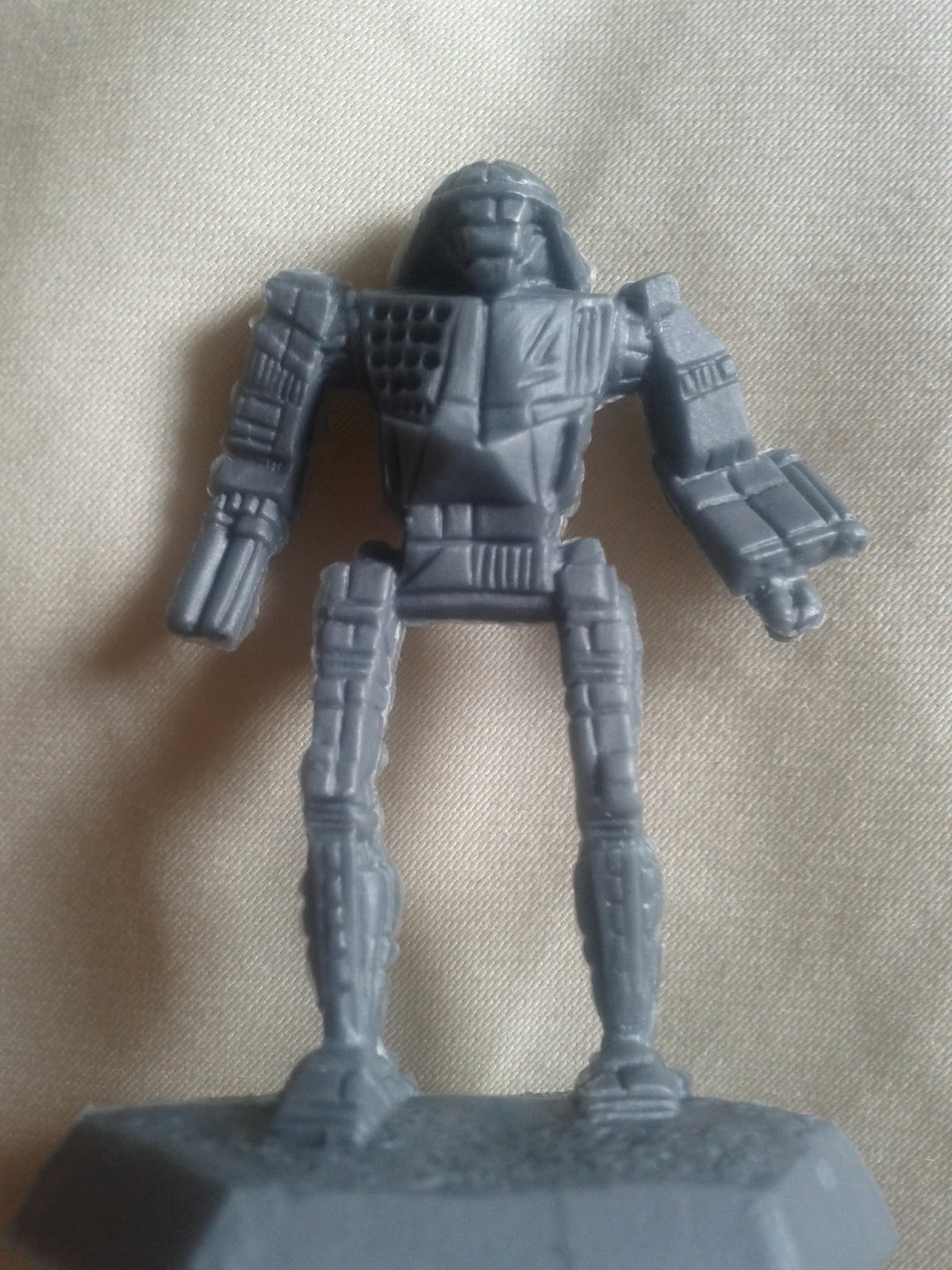 2 additional 'high quality plastic' mechs are included which are clan mechs. These cleaned up much easier and are very nice sculpts. I will probably save them till then end when I'm used to the paint schemes for mechs. Given that my regular opponent Brian is not a fan of clan mechs, given that "they do everything too well and there's not a lot of strategy to them", and of course that the campaign book we've started with is pre clan invasion, they shall have to guard the lead mountain.


In my mind, this introductory box is totally worth it. You can play straight out of the box and it's a great way to get your foot into Battletech. If you decide that you wish to play in a later era the mechs provided are still useful as second line/militia/poor mercenary mechs as well. The cost is very reasonable as well ( especially considering that basic rules for many systems are pushing 60 bucks).

Email ThisBlogThis!Share to TwitterShare to FacebookShare to Pinterest
Labels: 2013, Battletech